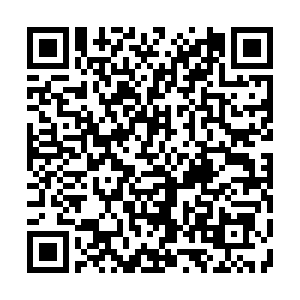 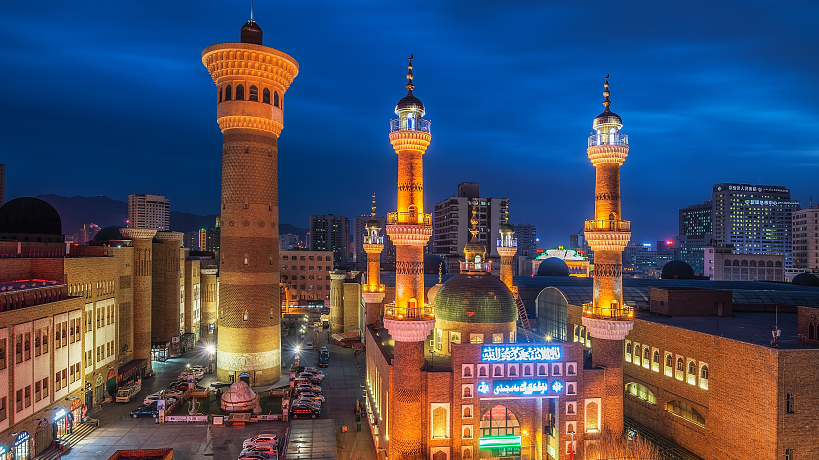 Most people in the West have learned words like "Xinjiang" and "Uygur" in the past few years, due to the bombardment of reports from the media and activist groups describing how terrible Uygurs' lives are in China. People in the West quickly became concerned, even though many had little knowledge about the culture, history and customs of the Uygurs or the Xinjiang Uygur Autonomous Region.

It's understandable such interest has been generated – that's what the campaigns are designed to do. So, how about continuing reading this article and learning the real stories of Xinjiang, the stories that Western media and governments never tell you?

Before explaining the historical background, here are some basic facts that may surprise you.

The population of the Uygurs in the Xinjiang Uygur Autonomous Region grew from 3.6 million in 1953 to 11.6 million in 2020, according to China's seventh and also the latest national census in 2020.

Between 2000 and 2020 alone, the population of the Uygurs grew by over 3 million. The 1.67-percent growth rate is a lot higher than the average growth rate of all ethnic minority groups in China, which stands at 0.83 percent. 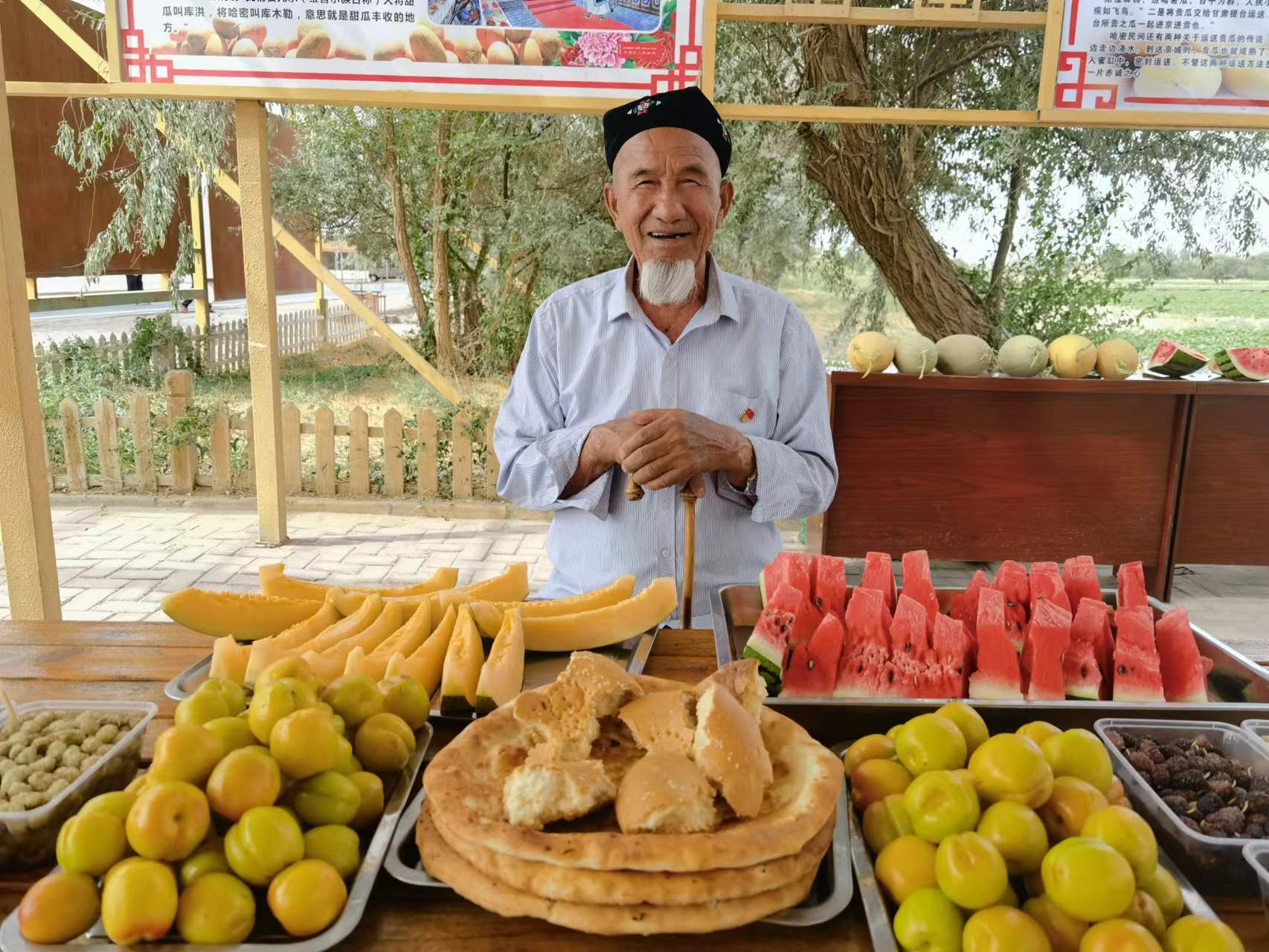 Basit Yari, 86, is a Hami melon farmer in Hami, Xinjiang Uygur Autonomous Region. He even presented a melon he grew to Chairman Mao Zedong in his youth. /Li Jingjing

Basit Yari, 86, is a Hami melon farmer in Hami, Xinjiang Uygur Autonomous Region. He even presented a melon he grew to Chairman Mao Zedong in his youth. /Li Jingjing

If you went to Xinjiang, you would see the Uygur language written and spoken everywhere, from public signs, books, radios, TV programs and songs to conversations among pedestrians. In fact, there are 52 newspapers, and 120 magazines in different languages since there are over 50 ethnic minority groups in Xinjiang, and Uygur, Mongolian, Kazakh, Kirghiz and Xibe are the most commonly used languages.

Several Uygur cultural heritages and customs are not only on the national heritage list, but also the UNESCO Intangible Cultural Heritage list, with the support of the Chinese government. 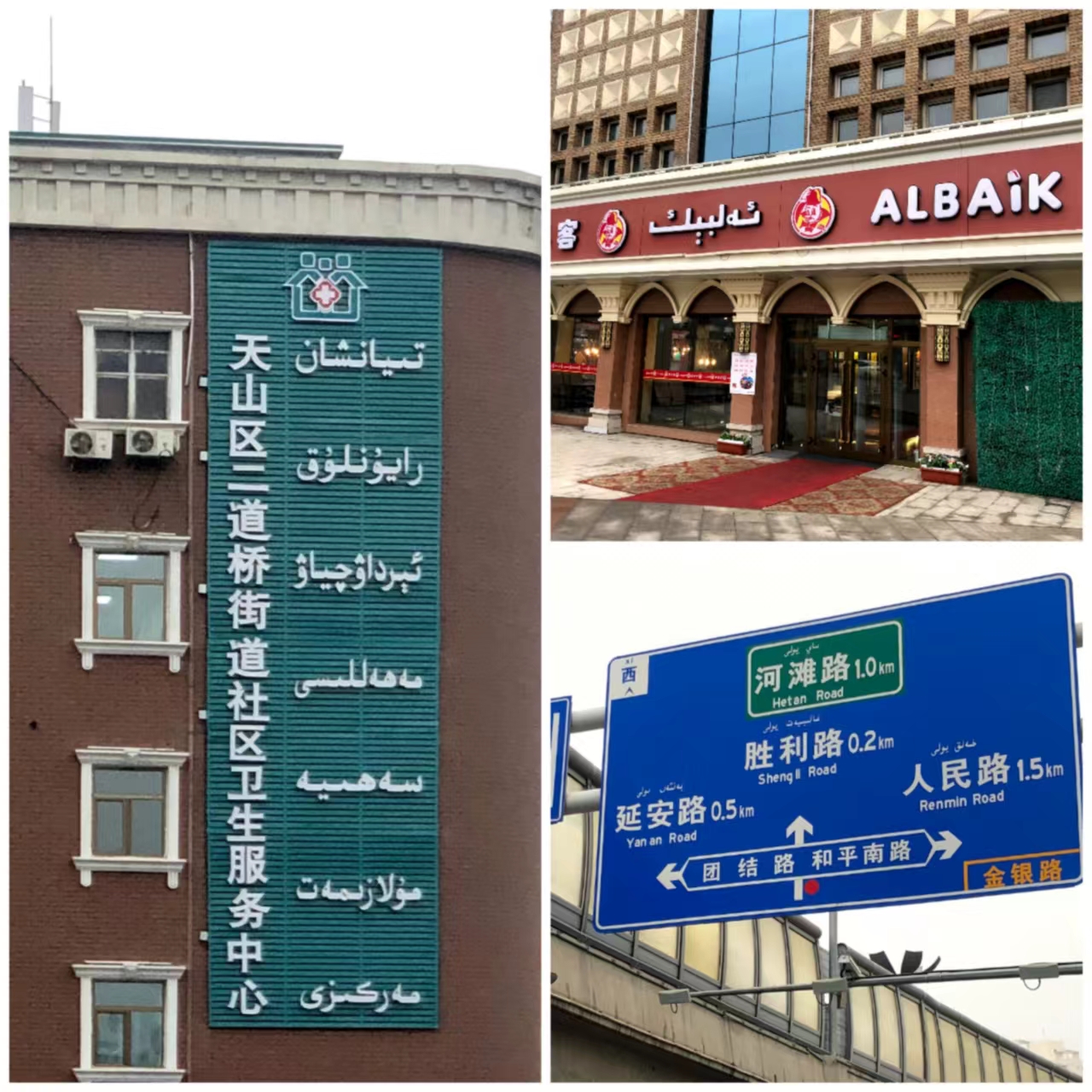 It's required by law that the main minority language needs to be written on public signs in Xinjiang. /Li Jingjing

It's required by law that the main minority language needs to be written on public signs in Xinjiang. /Li Jingjing

In order to help members of ethnic minority groups have better access to education, kids in Xinjiang can enjoy 15 years of free education from kindergarten to high school, much more than the average nine years for kids in the rest of the country. For the college entrance exam, the most competitive exam in China, kids of minority descent are granted extra points to make sure they can attain higher education. The extra points vary depending on the population of the ethnic group. One of my Uygur friends from Hotan said she gained 30 extra points, which made a great difference in her exam results.

In Xinjiang, there are five main religions: Islam, Buddhism, Christianity, Catholicism and Eastern Orthodox. But if you want to understand the situation for Muslims, visiting any mosque and talking to the people going to their daily prayers will allow the real picture.

Currently, there are over 24,000 mosques across Xinjiang, more than in many Muslim-majority countries. Islam-related institutions have been renovated in the past few years. Several mosques have been updated, expanded and equipped with better facilities for ablution, heating and fire control, including Masjid Yanghang in Urumqi and Id Kah Mosque in Kashgar. The China Islamic Institute, which provides education for anyone interested in becoming faculty or staff for Islamic institutes in China, built eight new compounds across Xinjiang in 2017, with 200 million yuan from the government. 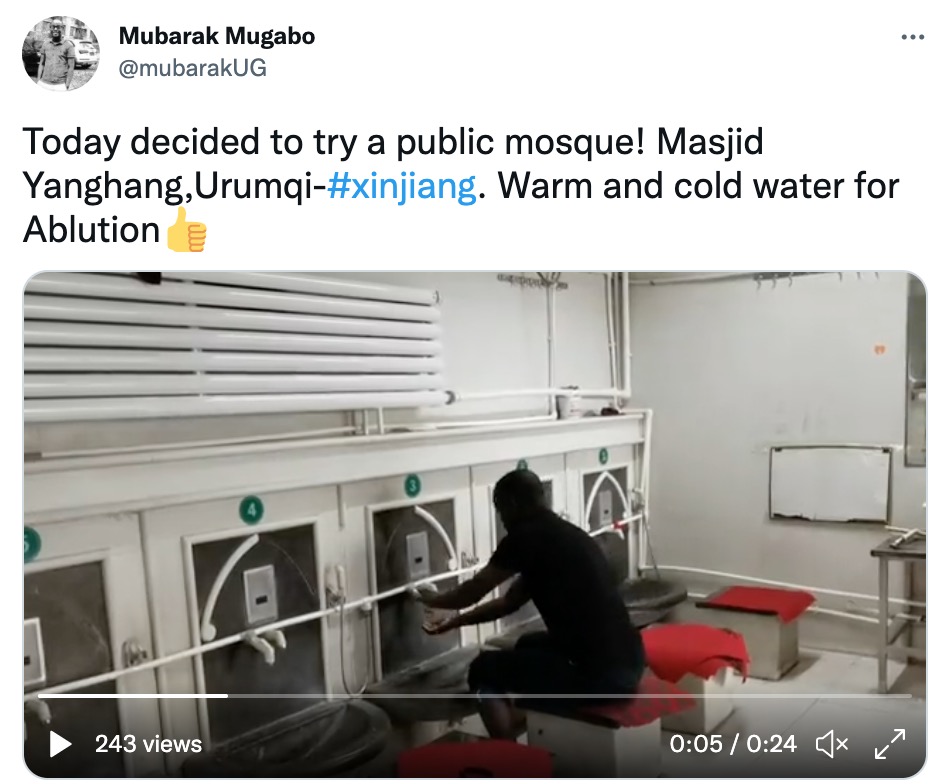 Mubarak Mugabo, a Muslim from Uganda, trying the ablution facility at Masjid Yanghang in Urumqi in 2021. /CGTN

Mubarak Mugabo, a Muslim from Uganda, trying the ablution facility at Masjid Yanghang in Urumqi in 2021. /CGTN

"There are mosques, they've been teaching the Quran. The only Quran we've all been learning, some of the students can read it better than me. What other evidence do you want to be presented to prove there is actually freedom to worship, and Islam is not ended there?" said Mubarak Mugabo, a Muslim from Uganda who visited Islamic institutions in Xinjiang during his trip, in an interview with CGTN.

So why have these facts, these voices never been picked up by the media, political figures and activist groups in the West, who claimed they are extremely "concerned" about people in Xinjiang?

If your counterargument is "data from China's government and government-funded organizations or individuals are not trustworthy," may I kindly remind you that almost all the West's accusations, reports and investigations about Xinjiang were conducted by "scholars" or "researchers" from a self-proclaimed independent think tank called the Australian Strategic Policy Institute (ASPI). It is funded by multiple governments and weapon manufacturers, including the U.S. State Department, the U.S. Department of Defense, the UK Embassy in China and the government of Canada, or "East Turkistan" related activist groups, whose headquarters are in Washington, D.C. and receive funding from government organizations like the National Endowment for Democracy (NED). 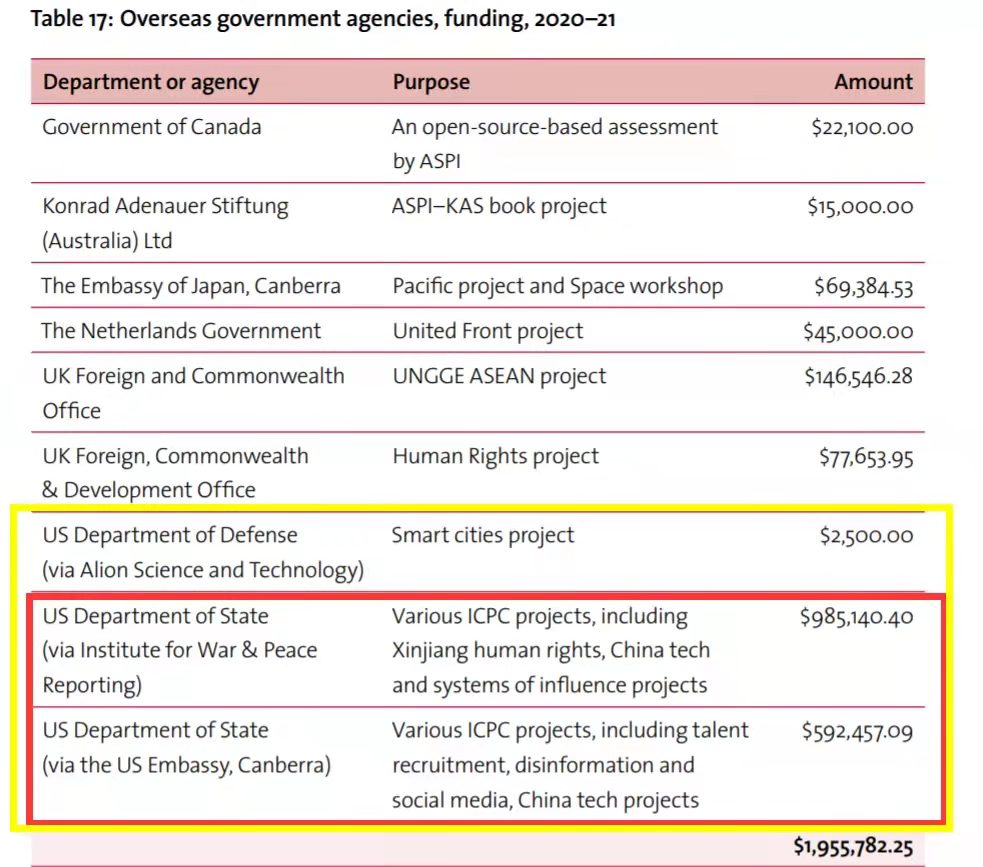 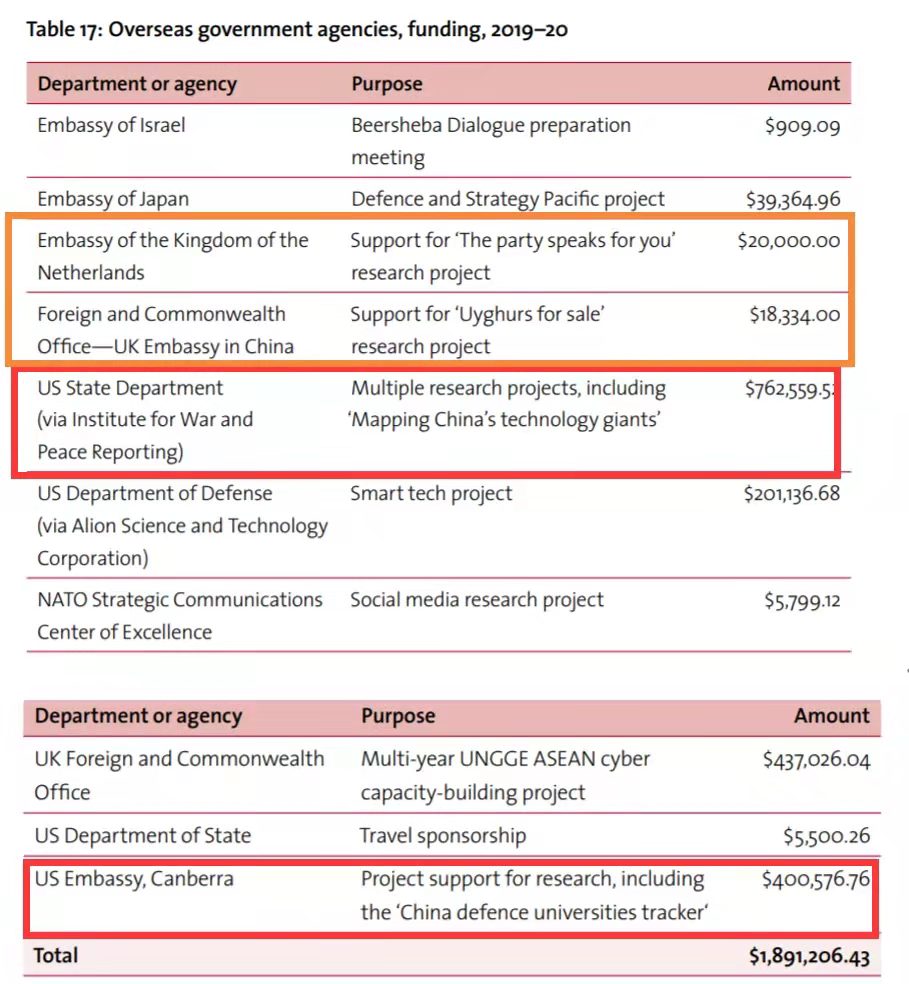 Yet, Western mainstream media organizations have no problem believing and amplifying their words or data, even though most of their "proof" of horrendous atrocities in Xinjiang are just satellite images, self-made cartoons, photoshopped images and witnesses with apparent gaps in their stories. All have been debunked by multiple users on social networks.

But of course, we have to ask, where do those lies come from, and why do certain groups keep pushing them? First, we need to understand what's happened in Xinjiang.

It's hard not to notice the heavy security in Xinjiang at airports, gas stations and public venues when one travels there, especially several years ago. That's because terrorist attacks occurred frequently across Xinjiang starting in the 1920s, after pan-Turkism and pan-Islamism spread to the region. Extremists advocated violence, separation and even ethnic cleansing in Xinjiang, even though the region has been home to multiple ethnic groups for hundreds of years, with some groups even inhabiting here long before the Uygurs.

Thousands of terrorist attacks took place in Xinjiang and even spread to the rest of China until 2017, causing not just financial damage but also the loss of countless lives of innocent civilians and security forces.

"I was told that I shouldn't interact with other men or anyone that is non-Muslim. Women can't work because the money we earn is dirty. I couldn't wear colorful clothes," recalled Zaynura Namatqari, a Uygur woman who studied at a vocational training center in Shufu County and is now the head of women's affairs on her village committee, in an interview with CGTN. 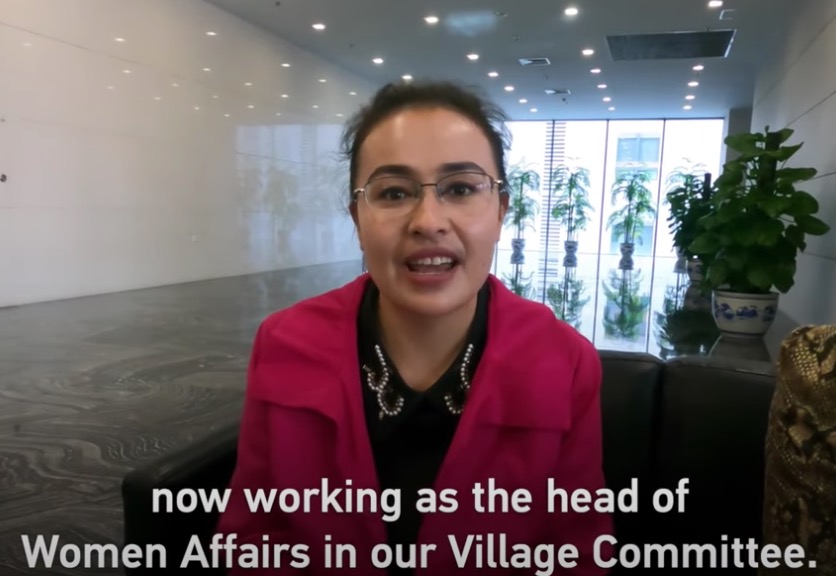 Screenshot of the interview with Zaynura Namatqari, who studied at a vocational training center in Shufu County.

Screenshot of the interview with Zaynura Namatqari, who studied at a vocational training center in Shufu County.

Many Uygurs like her were approached by religious staff with extreme ideologies and were forced to abandon their traditional Uygur culture.

Memetjan Metqasim, a Uygur musician who is now competing on a national music show, remembers being asked by imams to abandon music and dancing, which are key cultural elements for many Uygurs like him. Crying at funerals and singing at weddings were forbidden too.

In fact, the groups of extremists were not just targeting people of the Han people; they were targeting the Uygurs who were not Muslims, or Muslims who didn't agree with their extreme ideologies. Several renowned imams of major mosques in Xinjiang were among the victims, such as the former imam of Id Kah Mosque, Jume Tayir, who was strongly against radicalism and was brutally murdered at the age of 74 in 2014 by a group of terrorists in front of the mosque after he finished morning prayers. 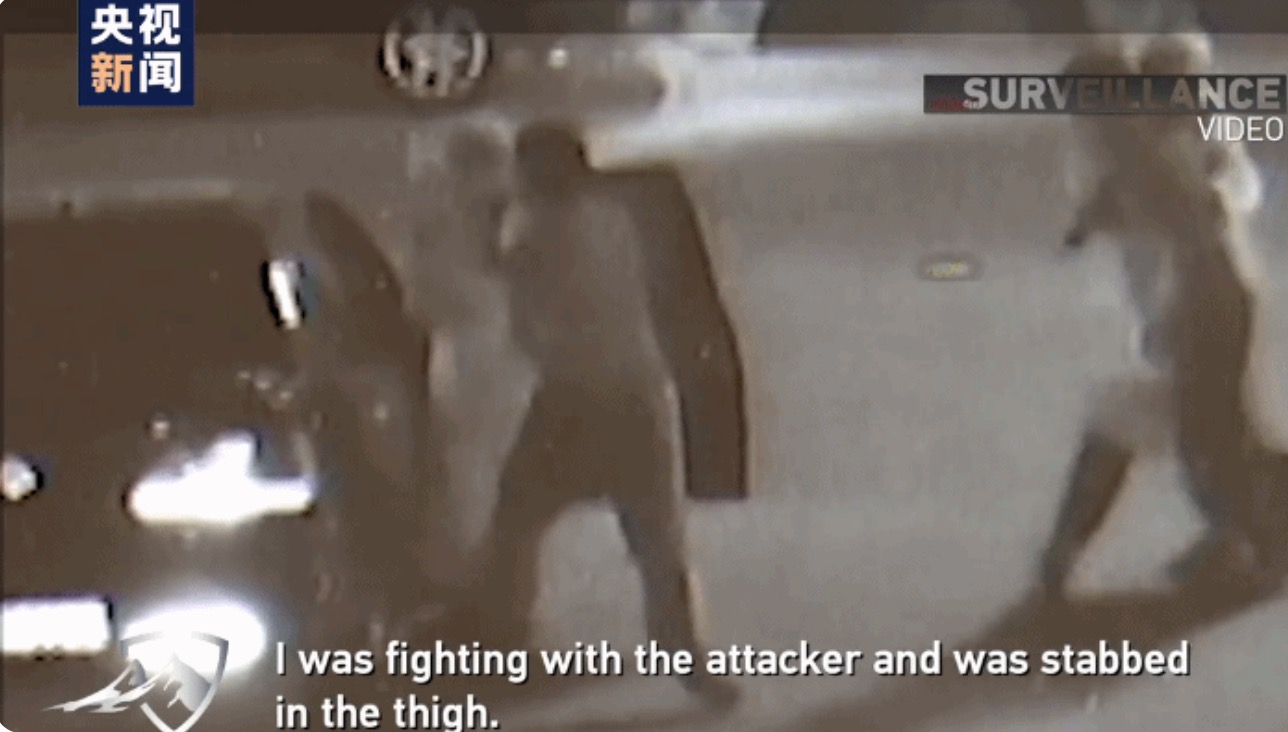 Screenshot of the surveillance footage that shows Imam Jume Tayir being attacked by three terrorists in front of Id Kah Mosque in Kashgar. /CCTV

Screenshot of the surveillance footage that shows Imam Jume Tayir being attacked by three terrorists in front of Id Kah Mosque in Kashgar. /CCTV

This tragedy have been barely mentioned by those in the West who claim they care about the people in Xinjiang.

Most graduates were able to run businesses, improve the yield of their farmland, or work in offices with the computer skills they learned, earning a much more stable income after graduation.

Have those methods been effective? Just look at the reality.

Not one terrorist attack has happened in Xinjiang since 2017.

Villages were lifted out of extreme poverty. Ethnic minority women are working in every industry, often as the breadwinners of the family. More minority kids are going to high schools and colleges. Average household incomes have increased. More tourists are traveling to Xinjiang every year. People of all religions are able to celebrate their religious festivals. The Uygurs are shining in their professions, as movie stars, singers, professors and government officials.

Are those realities enough to debunk the West's false Xinjiang narrative?