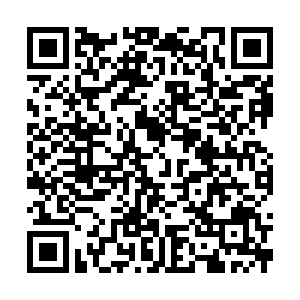 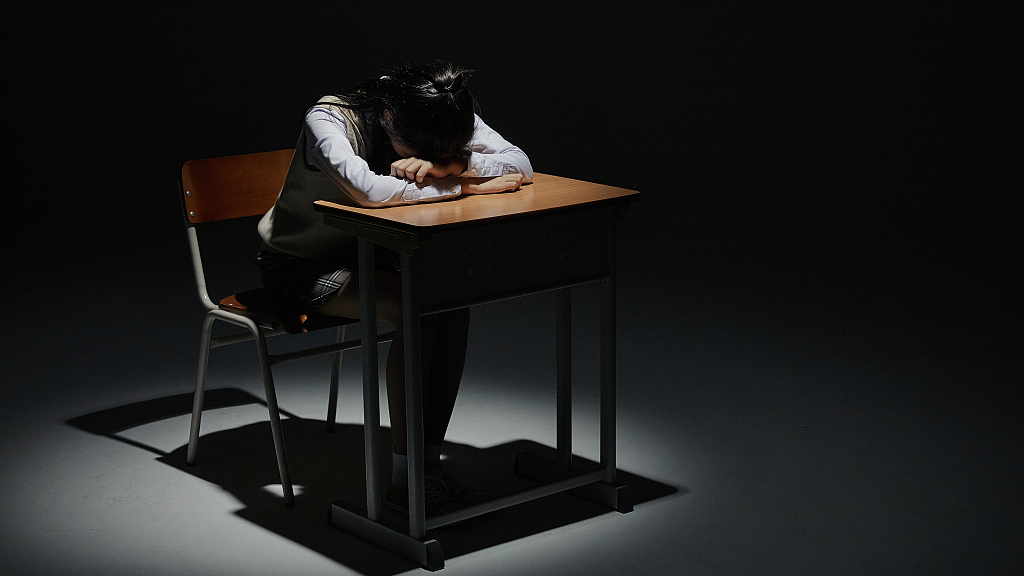 One wintry night, an over-anxious boy ascended to the rooftop of a five-story building, lumbering toward the edge. The boy, 17, was in his third year at Peking University, one of China's top academic institutions. He had written a will, slashed his wrists, and wandered on the terrace, like he had done many times.

Merely seconds before jumping, he caught sight of a mental health poster on the flank, hesitated, and dialed the hotline number printed on it. Moments later he was taken by an ambulance to hospital, where he was diagnosed with severe depression. His father rushed to Beijing to help him apply for a gap year.

Prismlover, the moniker the boy preferred that we use upon accepting our interview over a year later, recalled that he had been mentally exhausted since junior high. High academic expectations from his parents, bullying from his classmates, and a lingering feeling of loneliness all weighed heavily on the young teen.

"A variety of coincidences and mistakes have shaped a 'me' like that." That was how he put it after surviving the suicide attempt.

An epidemiological survey between 2012 and 2021 reveals some 17.5 percent of Chinese children and adolescents have mental disorders. The nine-year-long survey of around 74,000 people aged six to 16 was the first of its kind in China. Due to lack of mental health awareness regarding this young Chinese population, solid data in the past is limited and hence statistical comparisons are difficult. But experts say there's been a decline in mental health among teenagers. Chen Zhiyan, professor at the Institute of Psychology, Chinese Academy of Sciences, said over 100 studies on mental health over the past two decades reveal that the situation is getting worse.

A mental health development report released last year by the Institute found that almost one in four teenagers (24.6 percent) had a noticeable level of depressive symptoms, and 7.4 percent was at a severe risk of getting major depression. For children and adolescents under the age of 17, around 30 million are constantly plagued by mood disorders, according to another report. Visits to the clinic and hospitalization have risen in recent years, but are still the tip of the iceberg since many feel ashamed of seeking psychological or psychiatric therapy for their children.

Depression is a primary cause of self-harm and suicide. Statistics from the Institute of Child and Adolescent Health of Peking University show that approximately 100,000 teenagers in China die by suicide every year. "Teen suicide has been increasing at an alarming pace over the last decade," said Huang Xuebing, department head of clinical psychology at the Peking University Mental Health Institute. 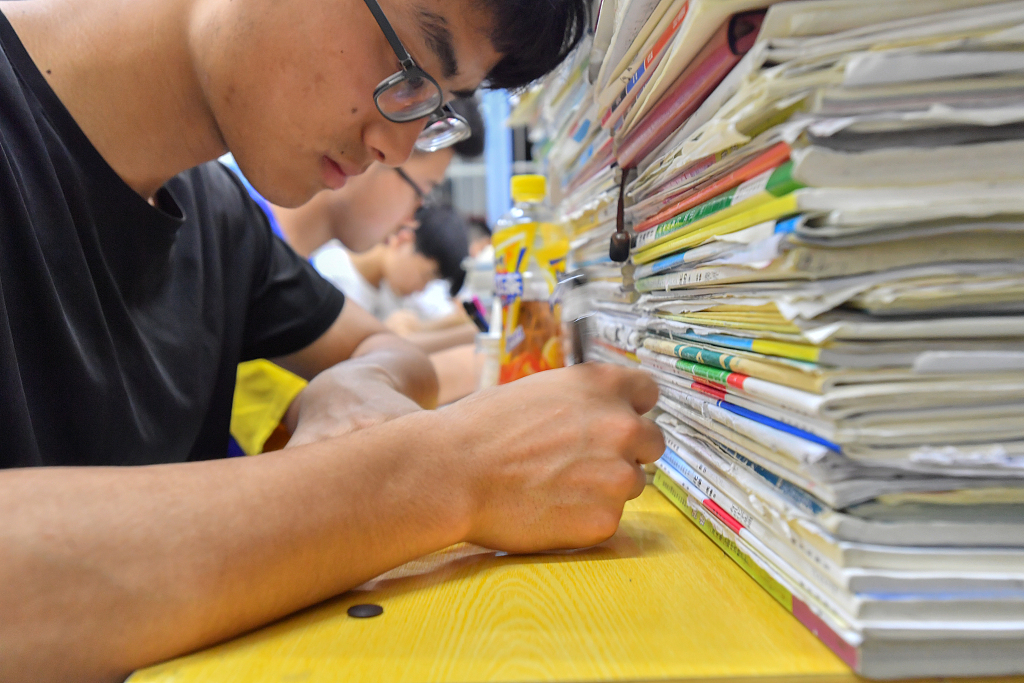 Students study in a classroom at a senior high school in Songtao County, Tongren, southwest China's Guizhou Province, on the evening of May 15, 2021. /CFP

Students study in a classroom at a senior high school in Songtao County, Tongren, southwest China's Guizhou Province, on the evening of May 15, 2021. /CFP

Behind the decline in teen mental health are a complex web of factors. Parents caging kids to the top of the class in a vehemently competitive academic environment while neglecting their other needs can have a direct impact.

A prodigy, Prismlover was admitted to Peking University at the age of 15. A straight-A student in primary school, his parents had imposed strict requirements regarding his academic performance. One minor error was too much.

"I entered a merit middle school, for which I was grateful. But my life was sordid. I had to rack my brain to explain to my parents when my grades slipped," he recalled, in a video that he wanted us to watch instead of having to repeatedly explain the entire process himself. In the monologue video released on Bilibili, the boy, by turns joyful and maudlin, said he had been studying insanely to keep his parents happy and that he under-performed in the college entrance examination so that he "tottered" into Peking University, meaning he couldn't "hold his head high" though he was among the top 10 students in his grade.

"It doesn't matter how talented you are as long as you are constantly being compared to others," Prismlover responded when asked why he felt inferior as a gifted kid under the envious gaze of others. His low self-esteem also came from always being bullied at school. His junior high classmates once ripped his shoes off and tossed them away. At university, someone in his laboratory threw his lab sample out. "There are senior fellows who are very good to me. But I was, mostly, a loner."

School bullying contributes to mental illness in teenagers. Though national concrete data is lacking, statistics by some local institutes show that victims of bullying, physical or verbal or both, are more likely to develop depression. "Bullying, among all the factors at school, may exert the biggest impact on victims and even onlookers. And the impact can last several years," Chen, from the Institute of Psychology said. She talked of a case in which the child wasn't bullied but was highly insecure because he saw such activity unfold.

Being bullied leads to fear, rage and moroseness. Meek, reticent kids would retreat even further. Girls are more likely to fall victim to school bullying, which can be more multifaceted since it involves not only physical altercations but also peer dynamics.

Xia Zhi, a 16-year-old girl from a second-tier city in eastern China, told us she had been excluded from almost every class activity. "I had only two friends. One day they split apart, but later they suspected me of sowing discord." That caused her first mental breakdown.

As she went to high school, such breakdowns came more frequently, along with stomach aches and insomnia. When diagnosed with depression, she lapsed into self-doubt as her friends blamed her for being "too weak to handle common pressure." Despite all that, she craved friendship.

"School was like a prison for me, because I couldn't leave or cry in the middle of a class," she said. She usually headed back home at night crying. During the interview which happened during her year off school, the girl frequently blamed herself for being "lazy," or "not self-disciplined." She'll resume school next January, but the thought of seeing her classmates made her anxious. 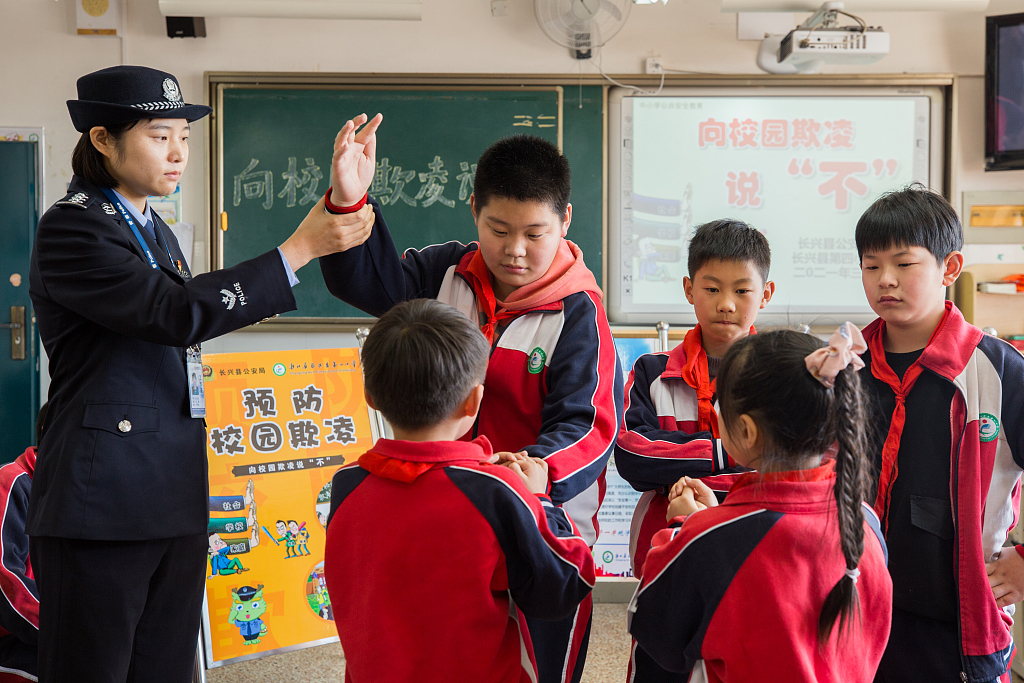 Students learn how to react in a simulated bullying scene under the guidance of a police officer at a primary school in Huzhou in east China's Zhejiang Province, March 26, 2021./ CFP

Students learn how to react in a simulated bullying scene under the guidance of a police officer at a primary school in Huzhou in east China's Zhejiang Province, March 26, 2021./ CFP

Mental illness grows with age during adolescence, which explains why many teenagers have to take a break from high school. We met 17-year-old Xiao Qi at an exhibition on eating disorders in Shanghai last year. By then she had been homeschooled for three years. "She's the ugliest girl." "She's so fat." "She's invisible."… She told us that's how her classmates described her.

"I'd been bullied by a girl since elementary school. She didn't stop in junior high. Sometimes she'd pull down my pants in public," Xiao said. She was skinny to the bone, after having anorexia for years. "Others think I'm fat and ugly. Me, too." She'd been used to peer comparisons. Xiao would weigh foods before eating them. She wouldn't face our camera since she didn't wear makeup, which usually took her three hours. Xia, the girl mentioned above, also has body image anxiety. They lack confidence in their appearance and in their broader selves.

Xiao never stopped hurting herself and her mother, a divorced woman who looked exhausted. "Every day I live in a hell. I've thought of giving up, but she's my daughter," her mother wept, leaning in the chair.

Like many teenagers, Xiao Qi spent lots of time on her phone. The rise of social media, with addictive and sometimes individualized content, is believed to be a main culprit for this mental health crisis. More teens tuck into bed with a phone next to the pillow. Prolonged use of smartphones will add to the anxiety of adolescents, who are at a critical identity-seeking stage. More vulnerable teens are more likely to lurch into self-doubt and feel inferior when compared to people with glamorous social media identities, Chen pointed out.

She also brought a factor that was usually ignored: sleep. Social media along with academic pressure is causing teenagers to lose sleep. "Adequate sleep is crucial in restoring emotional balance, but more than 80 percent of Chinese students don't get enough sleep (eight to 10 hours)," she said.

Sleep deprivation also interferes with the development of the prefrontal cortex, an important part of the brain responsible for cognitive functioning and emotional regulation. "The prefrontal cortex in children and adolescents isn't as developed as that in adults," Huang said. So young people have greater difficulty in coming up with ways to cope with rapid changes to their environment, and with the influx of information on social media. 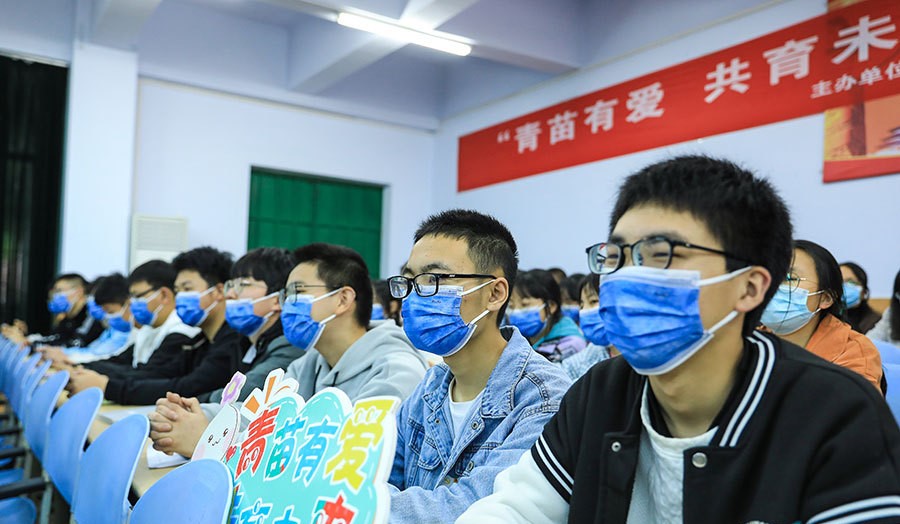 Students listen to a lecture on mental health at the Youth activity center in Liangping District in southwest China's Chongqing Municipality, April 18, 2022. /Xinhua

Students listen to a lecture on mental health at the Youth activity center in Liangping District in southwest China's Chongqing Municipality, April 18, 2022. /Xinhua

The government has tried to remedy this crisis by mandating that children get enough sleep, among other policy measures to help youth deal with mental health problems, but they are still largely on paper. The effectiveness of these measures still largely depend on the willingness of parents and teachers to acknowledge and address these issues.

Even after Prismlover was discharged from the hospital where he was treated with electroconvulsive therapy and medication in addition to counseling, he still felt suicidal occasionally. But the good thing is, he thought, he can sometimes manage to forget about the unhappy things that happened to him. When asked about his future plans, he said, "I hope I can push the boundary of human knowledge further by making new discoveries, and then… live a normal life."

(Except for Professor Chen Zhiyan and Dr. Huang Xuebing, the names of the interviewees are pseudonyms to protect their privacy.)

For readers in China: If you or someone you know is suffering mental health issues, please call 86-10-62760521 (Peking University's 24-hour psychological support hotline).