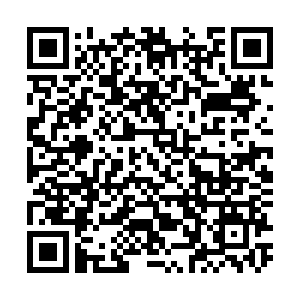 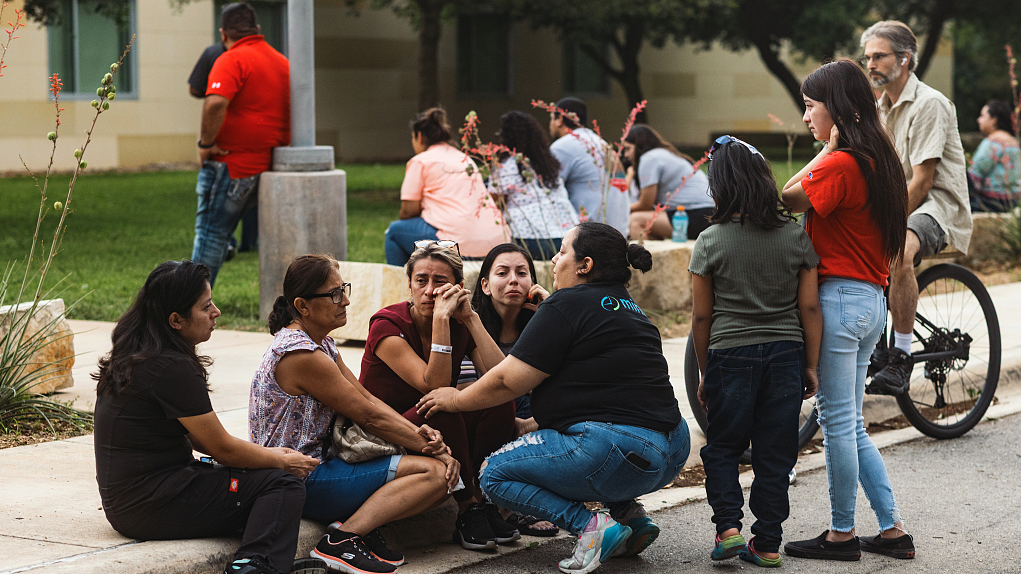 People grieve outside the Willie de Leon Civic Center, where the community has gathered in the wake of a mass shooting at Robb Elementary School in Uvalde, Texas, U.S., May 24, 2022 . /CFP

People grieve outside the Willie de Leon Civic Center, where the community has gathered in the wake of a mass shooting at Robb Elementary School in Uvalde, Texas, U.S., May 24, 2022 . /CFP

All victims, including 19 kids and two teachers killed Tuesday in the school shooting in Uvalde, in the U.S. state of Texas, have been identified, authorities said on Wednesday.

They were shot and killed inside a fourth grade classroom at Robb Elementary School, just two days before the summer break, said Chris Olivarez, a spokesman for the Texas Department of Public Safety.

Another 17 people were injured in the shooting and their injuries are not life-threatening, Texas Governor Greg Abbott said at a news conference on Wednesday.

The gunman, a local high school student identified as Salvador Ramos, shared his plan on Facebook minutes before the attack. He was killed by a Border Patrol officer on the scene, Abbott said.

Local media reported that Ramos legally purchased two assault rifles and 375 rounds of ammunition from a federally authorized dealer in the Uvalde area last week for his 18th birthday.

"It's the first thing he did when he turned 18," Texas State Senator Ronald Gutierrez, who represents Uvalde, told CNN. "He had no problem accessing those weapons."

A personal background examination revealed a bullied loner with few if any friends and no criminal or known mental health history, said the CNN report. 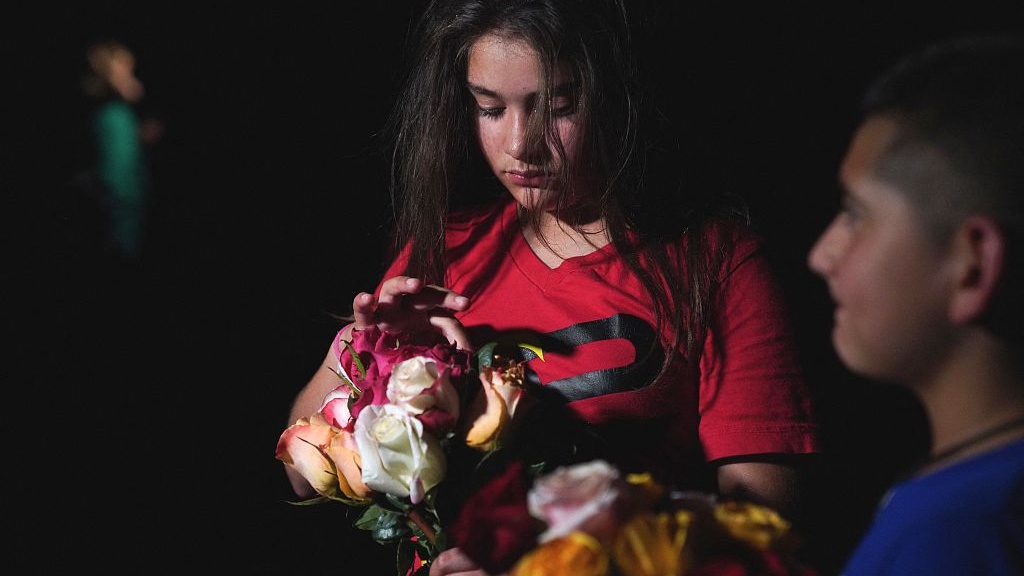 A young girl holds flowers outside the Willie de Leon Civic Center where people gather to mourn in Uvalde, Texas, U.S., May 24, 2022. /CFP

A young girl holds flowers outside the Willie de Leon Civic Center where people gather to mourn in Uvalde, Texas, U.S., May 24, 2022. /CFP

Abbott, who is seeking reelection this year, placed the blame for the Uvalde school shooting on mental health issues.

"This is totally predictable," Texas Democratic gubernatorial candidate Beto O'Rourke yelled at the governor and interrupted the press conference. O'Rourke then was led away by officers.

O'Rourke said Abbott did nothing to solve the problem of easy access to guns that is plaguing communities across Texas and the nation.

The governor "has refused to champion red flag laws. He's refused to support safe-storage laws so young people cannot get their hands on their parents' weapons," O'Rourke said.

"Why are we letting this happen in this country? Why is this happening in this state? Year after year, city after city," O'Rourke said.

The Uvalde tragedy is the deadliest shooting at a school since the Sandy Hook massacre in Connecticut in 2012 that left 26 people dead, including 20 children between 6 and 7 years old.

The shooting once again demonstrates that gun violence, a deep-rooted problem in the United States, is worsening, local analysts say.

"By doing nothing to prevent gun violence, (our) nation chooses this pain," an editorial published by the San Antonio Express-News said.

As of Tuesday, over 31,300 people had died or been injured due to gun-related incidents in the United States this year, according to a database run by the nonprofit research group Gun Violence Archive.

Including the Uvalde tragedy, there have been at least 40 shootings in K-12 schools, colleges and universities in the United States so far this year, resulting in at least 31 deaths and more than 50 injuries.

"How many more children must lose their lives from senseless gun violence?" Houston Mayor Sylvester Turner questioned in a statement on Tuesday.