Download
The forgotten victims of the war in Ethiopia
Fisseha Adugna 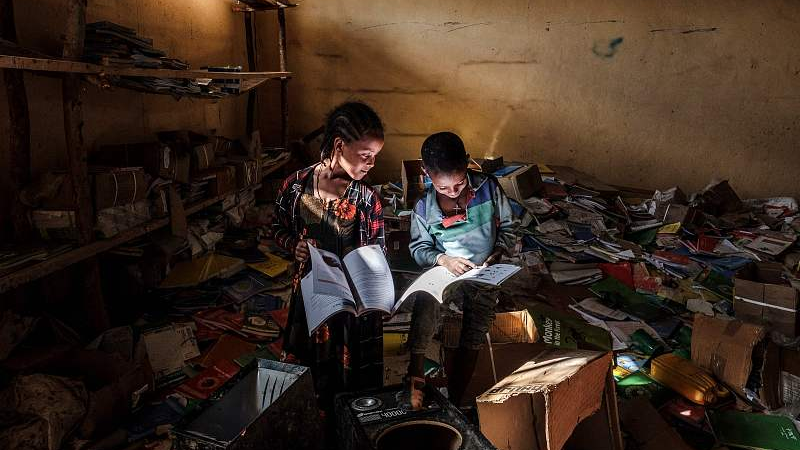 Children read books in the library of an elementary school that was damaged during the fightings that broke out in the village of Bisober in Ethiopia's Tigray region, December 9, 2020. /CFP

Children read books in the library of an elementary school that was damaged during the fightings that broke out in the village of Bisober in Ethiopia's Tigray region, December 9, 2020. /CFP

Editor's note: Fisseha Adugna is the former Ethiopian ambassador to the United Kingdom. The article reflects the author's opinions and not necessarily those of CGTN.

The conflict in Northern Ethiopia has entered its 19th month and skirmishes continue across the region. A government-led humanitarian truce has been challenged on numerous occasions by rebel fighters who keep occupying large parts of the Afar region. The intensity of the conflict has eased, but tensions and risks of escalation have become part of daily life for millions of Ethiopians here.

In May, the United Nations trucks delivered thousands of metric tonnes of food and other essential items to the city of Mekelle in Tigray. That continues on today with humanitarian convoys regularly flowing to the area, since road transportation of aid has resumed since the beginning of April. This is a welcome relief for the 5.2 million Ethiopians living in Tigray.

Nevertheless, the international community should not lose sight over the plight of the millions of Ethiopians living in the Amhara and Afar regions, which now seem to have been forgotten. They are in desperate need of humanitarian aid.

Not a day goes by without a tweet from a politician, a speech from a diplomat, or an editorial column raising the alarm for the people living in Tigray. The efforts to save lives are commendable but seldom do you hear about the tragic plight of those in Afar and Amhara.

The picture painted by the Tigray People's Liberation Front (TPLF) over the past 18 months is one where government forces have attacked innocent civilians. But that's a claim far from reality.

The conflict was started by the TPLF, a political group that led Ethiopia for 27 years as an authoritarian government, which lost power in 2018. In their own accounts, the rebels have confessed to attacking military bases in the Tigray region initiating a defensive response from government forces. Meanwhile, the United Nations Development Program (UNDP) said it would have been seen as "an act of war anywhere in the world, and one that typically triggers a military response in the defense of any nations." 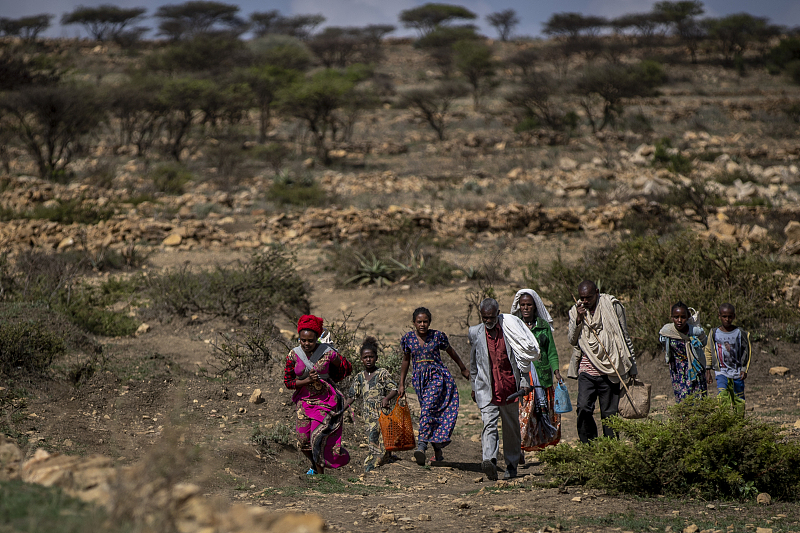 People walk from a rural area towards a nearby town where a food distribution operated by the Relief Society of Tigray was taking place, near the town of Agula, in the Tigray region of Ethiopia, May 8, 2021. /CFP

People walk from a rural area towards a nearby town where a food distribution operated by the Relief Society of Tigray was taking place, near the town of Agula, in the Tigray region of Ethiopia, May 8, 2021. /CFP

In June 2021, the rebels pushed forward invading the Afar and Amhara regions, bringing untold misery to innocent civilians, and they threatened to march on Addis Ababa. They were repelled in late 2021 but continued their attack areas on Afar and Amhara.

Such actions also compounded the challenges for getting aid to Tigray as confirmed by the UK's Permanent Representative to the United Nations Simon Manley at a meeting of the UN Human Rights Council (UNHRC) in March: "TPLF attacks continue to inhibit delivery of aid across northern Ethiopia."

The huge gap between what the international community believes to be true and what has actually happened in Ethiopia has had serious consequences. The primary victims of the war are all Ethiopians, mainly Tigrayans, Amharas and Afars. With the lack of adequate attention by the international community, residents from Amhara and Afar are suffering under a dire situation.

The latest United Nations Office for the Coordination of Humanitarian Affairs (UNOCHA) bulletin highlights the desperation they face: More than 10 million people in Amhara need health services and interventions; in Afar, only 94 health facilities, or 22 percent of the 414 facilities, are functional; more than 1.8 million children have no access to basic education services; in the Amhara region, 3.3 million farmers need at least one type of agricultural intervention.

When analyzing the UN's statistics, the situation in Afar and Amhara is getting worse by the day: More people are malnourished, more people are displaced, hundreds of thousands of more children can't attend school and the health systems have been decimated. This inconvenient truth is seldom highlighted by the international media.

The desire to see the TPLF rebels as the good guys has distorted the perceptions of the conflict and has caused more violence and heartbreak for many ordinary Ethiopians. The Amnesty International has quietly reported on the atrocities of the TPLF but with little fanfare, while delivering their reports into the allegations against the Ethiopian government as well.

A recent report published by the Macdonald Laurier Institute found, through interviews with displaced rebel soldiers, that the TPLF is continuing to recruit and deploy child soldiers, and yet these accounts have not been met by outrage, while some have challenge the motivations of the author.

The world is choosing to stay blind over the atrocities committed by the TPLF, which may suit the narrative that many want to believe. Yet, the consequences of such a position is millions of Ethiopians are going hungry, with no shelter, no education and no healthcare. The people of Afar and Amhara have become the forgotten victims of this war and we should not forsake them.