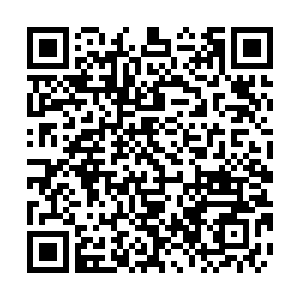 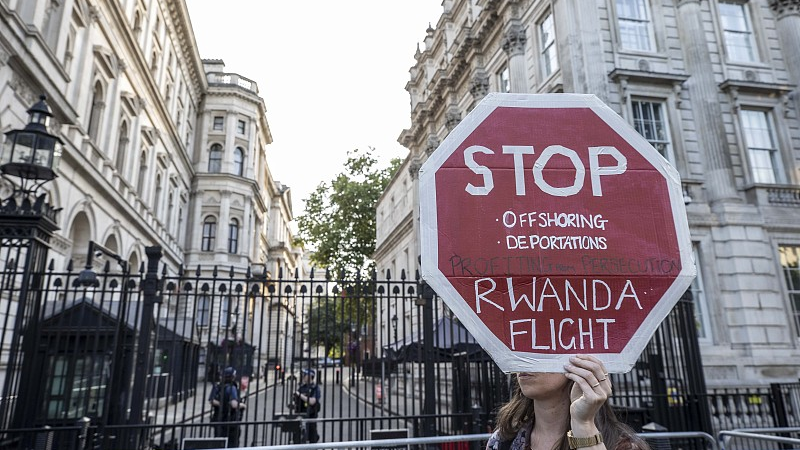 Hundreds of demonstrators gather to protest against the UK's plan to send migrants and asylum seekers to Rwanda in front of the Ministry of Interior, London, UK, June 13, 2022. /CFP

Hundreds of demonstrators gather to protest against the UK's plan to send migrants and asylum seekers to Rwanda in front of the Ministry of Interior, London, UK, June 13, 2022. /CFP

Britain's move to forcefully deport asylum seekers to Rwanda as part of a controversial policy is drawing the ire of critics from home and abroad, with some describing it as "morally reprehensible" while others questioning the legal and ethical mandate of the decision.

Activists say the program if allowed to succeed, could be damaging to the principle of asylum worldwide leading to unforeseeable suffering for a large number of refugees and immigrants.

As per the contentious deal struck in April between Prime Minister Boris Johnson's government and Rwanda, the East African country has agreed to receive and permanently resettle deported asylum seekers from Britain in exchange for an initial payment of 120 million British pounds ($155 million) plus operational costs.

According to reports, the policy is aimed mostly at single, young people who arrive in Britain through what the government refers to as "illegal, dangerous or unnecessary methods," such as on small boats or hidden lorries. Despite facing many legal challenges from rights groups, Johnson has fervently defended the policy maintaining that it is important to "stop criminal gangs" trafficking people into the United Kingdom.

In a humiliating blow to the government's plan, a British chartered flight to the Rwandan capital Kigali – the first scheduled to deport asylum seekers to the East African country – on Tuesday was barred from taking off after last-minute injunctions by the European Court of Human Rights (ECHR). The flight was the first of the many being planned for the purpose.

Earlier, a coalition of human rights organizations – Care4Calais, Detention Action, and the Public and Commercial Services Union – had sought an injunction on the flight but their plea was dismissed by a high court judge on Friday. A subsequent attempt to appeal the ruling at a higher was refused on Monday as was another injunction attempt the same day by rights charity Asylum Aid.

Meanwhile, the number of prospective "deportees" had come down from an original count of 130 to 37 who were due on Tuesday's canceled flight, which came further down to seven after each of them succeeded in legally getting their deportation delayed on individual claims. In the end, the ECHR's last-minute intervention ensured that no one was deported.

Despite the setback, an adamant government on Wednesday vowed that there would be no change in its policy and that the deportation program would go ahead. "We will not be deterred. Our legal team are reviewing every decision made on this flight and preparation for the next flight begins now," asserted British Home Secretary Priti Patel – herself the daughter of  Indian migrants from Uganda who arrived in the UK in the 1960s.

The UK government said preparations are underway for a new flight to take asylum seekers from the UK to Rwanda. 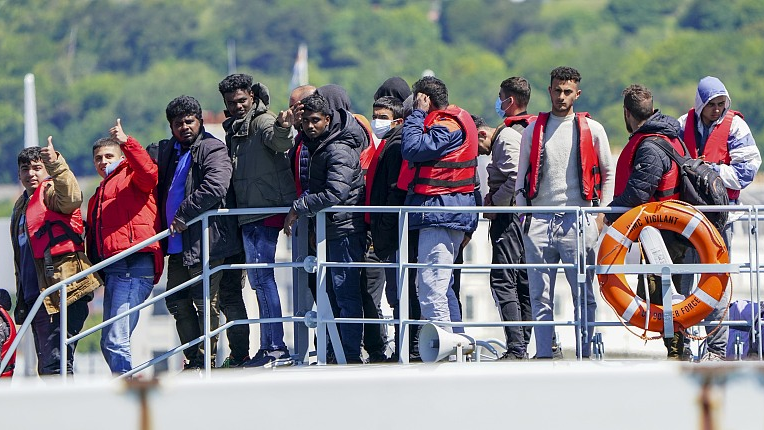 Migrants wave and gesture as the arrive in port on Border Force boat Valiant after attempting to cross the English Channel from France in Dover, England, UK, June 14, 2022 /CFP

Migrants wave and gesture as the arrive in port on Border Force boat Valiant after attempting to cross the English Channel from France in Dover, England, UK, June 14, 2022 /CFP

The policy has been criticized widely across Britain with the Church of England describing it as "immoral" and a move that "shames Britain." Archbishop of Canterbury Justin Welby, who's the head of the Church of England, and Archbishop of York Stephen Cottrell made their disagreement known in a letter to The Times. "We cannot offer asylum to everyone, but we must not outsource our ethical responsibilities, or discard international law – which protects the right to claim asylum," they said.

Prince Charles, the heir to the British crown, has privately described Johnson's asylum policy as "appalling" and is said to be particularly frustrated ahead of his scheduled visit to the Rwandan capital Kigali later this month, where the Prince of Wales will represent the Queen at the Commonwealth Summit.

The UN High Commissioner for Refugees Filippo Grandi has expressed his disapproval saying the policy "is all wrong, for so many different reasons." Noting that the UK is a signatory to the International Convention on Refugees, the UNHCR chief maintained that trying to "export" the responsibilities "runs contrary to any notion of responsibility and international responsibility-sharing."

Gillian Triggs, UNHCR's Assistant High Commissioner for Protection, said the "UNHCR remains firmly opposed to arrangements that seek to transfer refugees and asylum seekers to third countries in the absence of sufficient safeguards and standards. Such arrangements... evade international obligations, and are contrary to the letter and spirit of the Refugee Convention."

While Rwanda also said it remained committed to taking in asylum seekers under the April deal, campaigners have expressed concern over the East African country's capacity to offer safe living conditions to the deportees. Rwanda is already home to around 150,000 refugees from other African countries, including neighboring Burundi and DR Congo. Many migrants who try to cross the Mediterranean to Europe via Libya, end up taking refuge in Rwanda.

Campaigners point out that Johnson's policy is harsher than other countries' offshore migrant processing programs as it would end up compelling people with successful claims to asylum in Britain to start a new life in a third country, some 4,000 miles away. Many say the policy strikes at the very heart of challenging human dignity and breaches both domestic and international law.

Britain's Supreme Court is due to hold a judicial review of the policy next month. If the court finds the policy unlawful, asylum seekers sent to Rwanda could return to the UK.

What is even more appalling is the fact that the UK has long claimed to be the defender of human rights and it routinely passes judgments and criticizes other countries over their human rights records. However, the British government seems to be oblivious to human rights and humanitarianism as it shies away from responsibilities and tries to outsource asylum seekers to a third country.

"The British officials' rationale only convinces people that on human rights, the UK thinks solely about what it can get others to do, rather than what the UK itself needs to do," Chinese Foreign Ministry Spokesperson Wang Wenbin told the media on Tuesday responding to a question on the topic. "The UK government needs to ditch its arrogance and hypocrisy on human rights issues, and take serious actions to respond to the criticism and questioning from home and abroad."