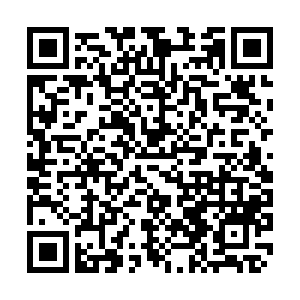 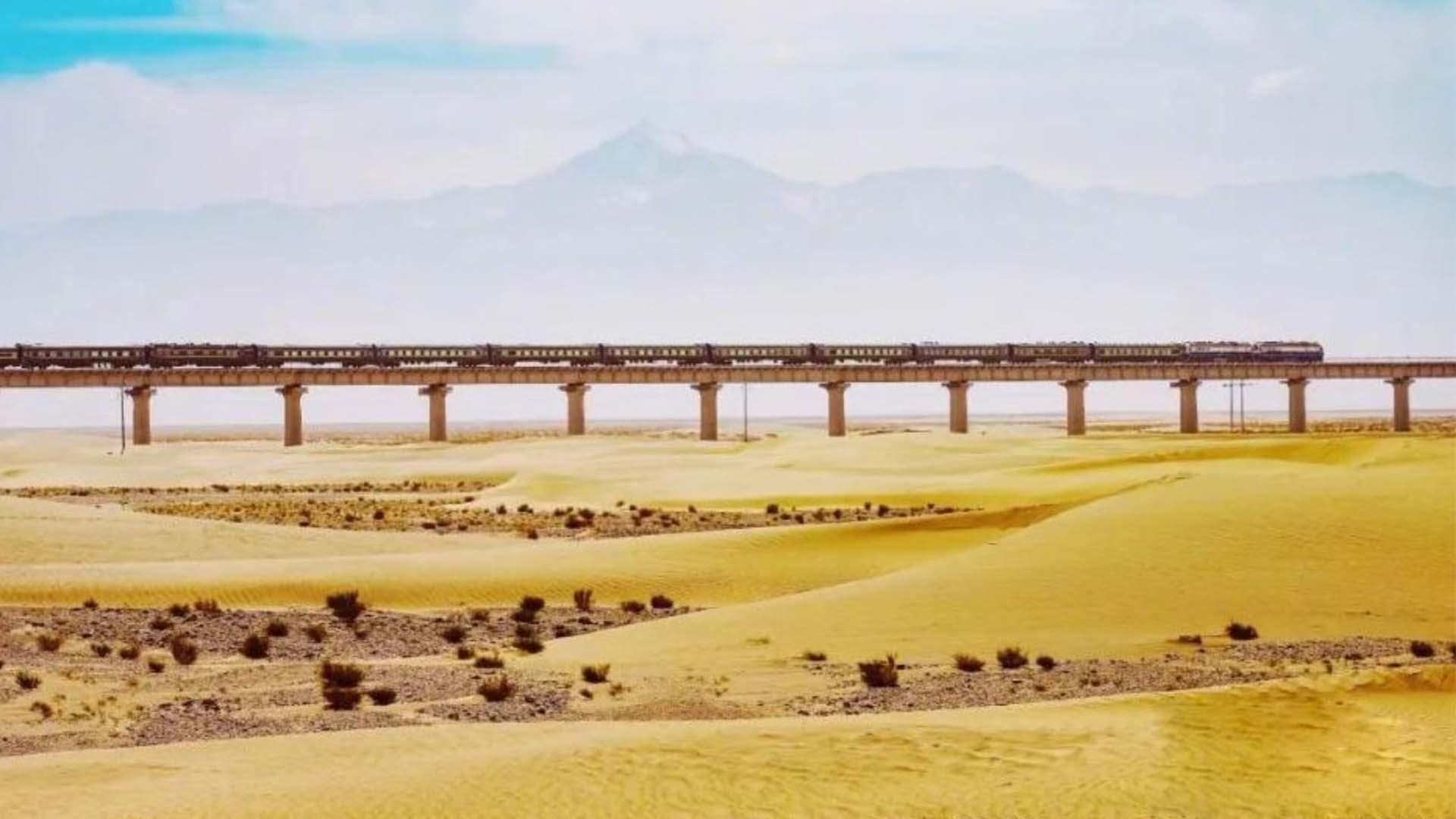 Situated in the Tarim Basin, the Taklamakan Desert is China's largest desert and the world's second-largest drifting desert, covering an area of 330,000 square kilometers. Due to its low water supply and sparse vegetation, only a few people live in the desert near oasis towns.

A total of 534 kilometers or 65 percent of the Hotan-Ruoqiang railway is situated in sandstorm-prone areas.

"For the railway to run properly, the sand can't get over the rail, or there would be two dangers. One is that the road will be hardened, and there will be no safety guarantee for driving. The other one is that the sand will bury the rail, causing problems for the train to run. So, our first task is to (protect the line against) the sand," said Wang Jinzhong, chairman of Xinjiang Hotan-Ruoqiang Railway Co., Ltd. 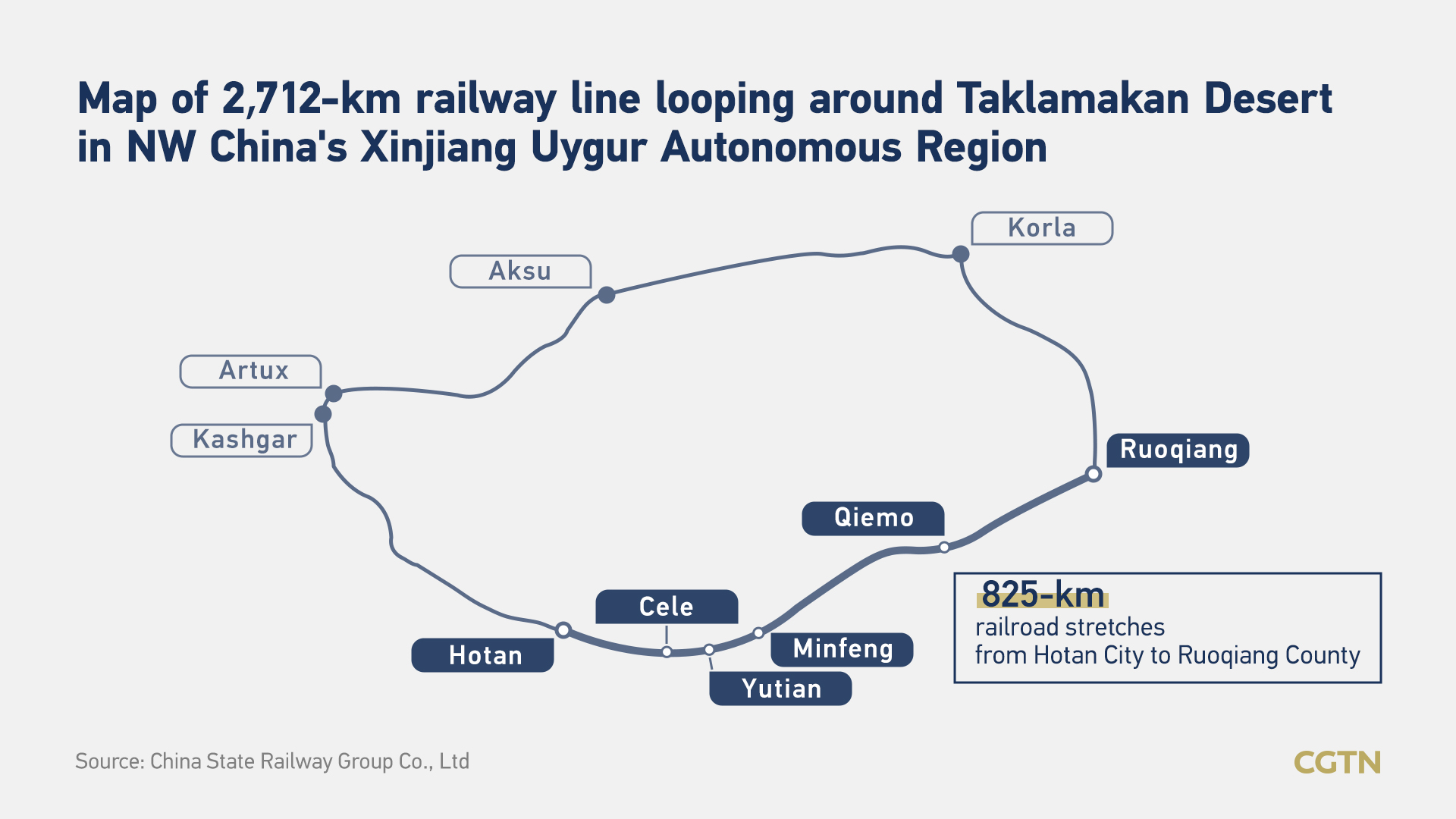 A map of the 2,712-km railway line that loops around the Taklamakan Desert in northwest China's Xinjiang Uygur Autonomous Region.

A map of the 2,712-km railway line that loops around the Taklamakan Desert in northwest China's Xinjiang Uygur Autonomous Region.

To protect the railway line from damage during a sandstorm, the designers elevated sections of the line on bridges set on pillars at intervals to allow the free passage of sand. A large number of plants were also planted along the Hotan-Ruoqiang railway line to help reduce the amount of sand that would fly about in a sandstorm.

"Wherever we plant trees, it forms a small sand pile around the trees. After the sand comes over, the plants play a role in preventing sandstorms," explained Zhao Jiahai, design principal of Hotan-Ruoqiang Railway of China Railway First Survey and Design Institute Group Co., Ltd.

Five sand-crossing bridges with a total length of nearly 50 kilometers have been built in areas where sandstorms are severe to reduce the impact of sandstorms on the railway. According to Guo Yangyang, chief project engineer of the Hotan-Ruoqiang Railway Project Department of China Railway 14th Bureau Group Co., Ltd, it protects the existing vegetation and animals and helps with managing the desert without destroying the original ecology.

A total of 50 million square meters of grass grids have been laid, and 13 million shrub and tree seedlings have been planted, stretching nearly 300 kilometers along the railway, covering the section most prone to sandstorms, according to the railway company.

The completion of the railway has brought the train to many local counties for the first time, greatly facilitating travel and logistics, especially regarding Xinjiang specialties, such as cotton, walnuts, dates and minerals.