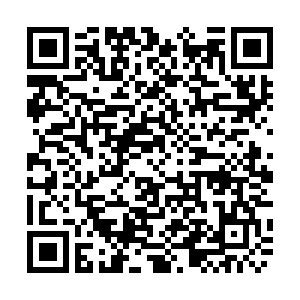 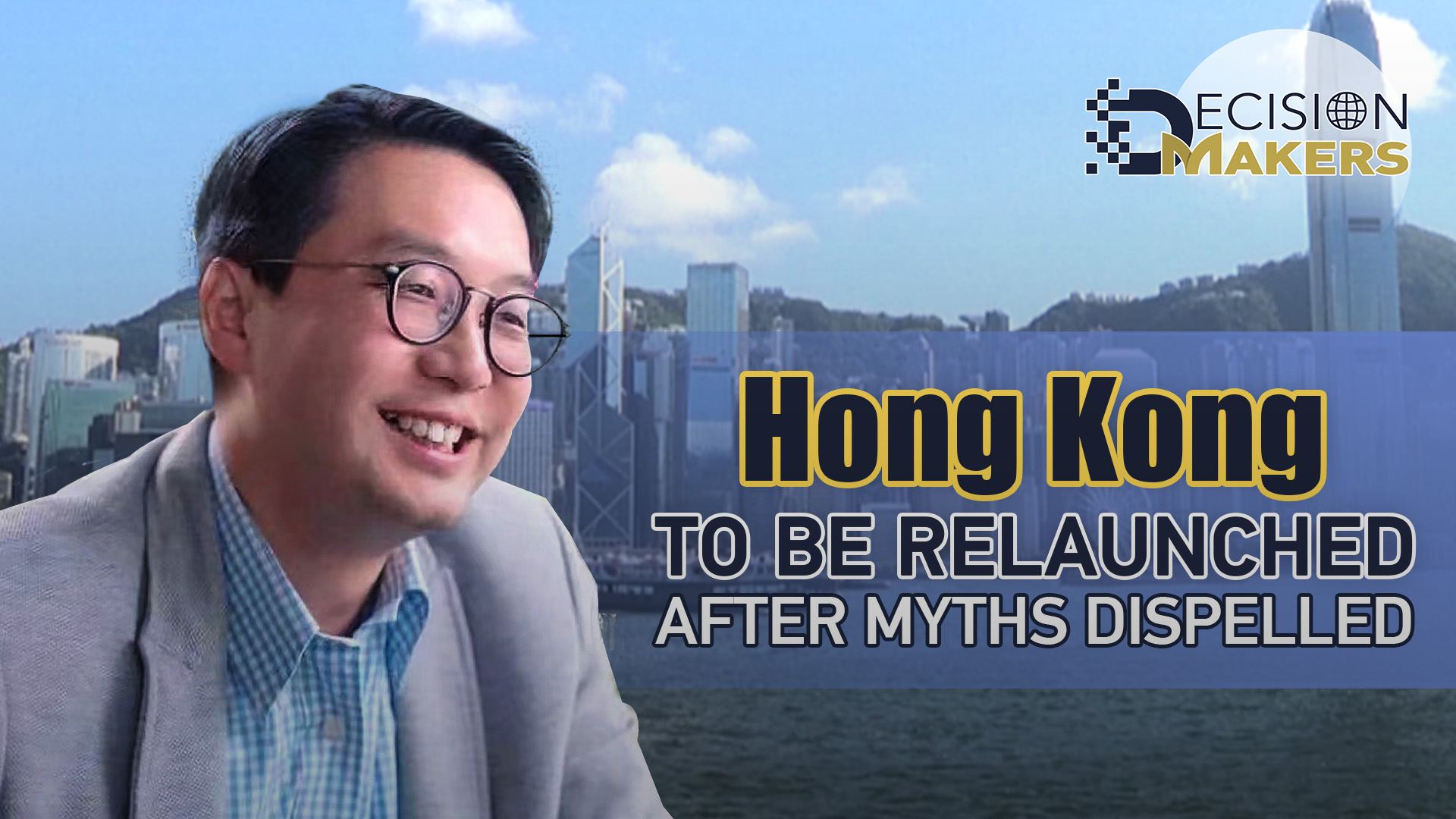 Editor's note: Decision Makers is a global platform for decision makers to share their insights on events shaping today's world. Henry Ho is the founder and chairman of One Country Two Systems Youth Forum. The article reflects the author's opinions and not necessarily the views of CGTN.

At the eve of the celebration of the 25th anniversary of the return of Hong Kong, it is widely acknowledged that the Special Administrative Region (SAR) has gone through a unique and successful path of development under the principle of "One Country, Two Systems." Despite this successful journey, we should not forget some of the misconceptions and myths that were once held and resulted in chaos in recent years.

The "One Country, Two Systems" principle is an unprecedented and innovative framework designed by the Communist Party of China under the leadership of Deng Xiaoping in 1980s. It embodies the Chinese wisdom of resolving international disputes through the integration of both sovereign principles and systemic flexibility. By allowing the HKSAR to retain its capitalist system, socialist China has benefited tremendously in its reform and opening-up process in the past decades. And of course, Hong Kong has largely achieved prosperity and stability throughout these years.

Many commentators have discussed how the National Security Law and the Improving Electoral System (Consolidated Amendments) Bill have facilitated Hong Kong's "relaunch" for the coming second half of the 50-year period. Here I would like to trace back some of the root causes of the confusion concerning Hong Kong status and its relationship with the Chinese mainland in the past by dispelling three major myths. These myths once gained traction among quite a number of Hong Kong people.

The first myth was the admiration of Western democracy model as a panacea to Hong Kong's problems. Perhaps there was no other place in the world where the electoral system has been under such intense debate for as long as four decades. The so-called pan democratic camp (opposition camp) in Hong Kong grew because of its insistence on Western style democracy in Hong Kong.

Instead of focusing on the root cause and providing solutions to Hong Kong's deep-seated problems, opposition politicians attribute most, if not all of Hong Kong's problems to the absence of universal suffrage for the election of the chief executive. Yet, any sensible person can realize that even in Western democratic countries, acute problems such as income inequality, racial discrimination, as well as religious and identity-related conflicts have been deteriorating in recent years.

Elections in many cases aggravate, not minimize social divisions. The Central Government has been a staunch supporter of Hong Kong's democratic system. Yet, the universal suffrage package of the chief executive proposed by the SAR government, while conforming to the Basic Law requirements, was vetoed by the 2015 Legislative Council. The Pan-democratic camp had become totally "anti-democratic."

The new electoral system in Hong Kong bids farewell to the myth of superiority of Western style democracy. It emphasizes both the bottom line of national security and the development of democracy; it recognizes both the importance of procedural democracy (via direct elections) and level of representativeness (via election committee as an electorate). The emphasis on national interests in the local electoral system provides a firm basis for further development of the system toward the ultimate goal of universal suffrage, as enshrined in the Basic Law.

The second myth refers to the emphasis or the superiority of "Two Systems" with respect to "One Country". Hong Kong's institutional strengths and high level of economic development gave some residents a sense of superiority toward the Chinese mainland.

The sincere guarantee of the Central Government to retain Hong Kong's original capitalist system and way of life for 50 years was misinterpreted by some people as Hong Kong being the role model for the Chinese mainland, and that one day, the Chinese mainland would follow Hong Kong's path of development. Obviously, this is totally unfounded. 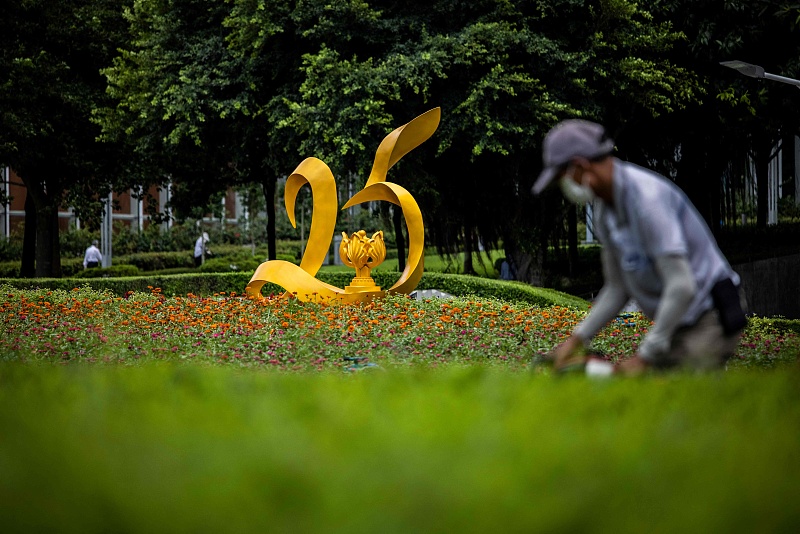 A sculpture celebrating the 25th anniversary of Hong Kong's return from Britain to China, is displayed in front of the Central Government Offices in the HKSAR, June 16, 2022. /CFP

A sculpture celebrating the 25th anniversary of Hong Kong's return from Britain to China, is displayed in front of the Central Government Offices in the HKSAR, June 16, 2022. /CFP

Finally, the third myth relates to Hong Kong's responsibility in safeguarding national security. For years, people have adopted a flippant attitude toward national security. The 2019 riots were indeed painful lessons learnt by every Hong Kong resident. National security is the jurisdiction of central or federal governments around the world and local authorities should have no legislative power.

Nevertheless, the Central Government placed a high level of trust in Hong Kong by allowing the enactment of its national security legislation through the provision of Basic Law Article 23. Unfortunately, Hong Kong people tended to take a biased approach by assuming that the safeguarding of national security would infringe on their individual rights.

Hong Kong therefore has failed to pass this importance piece of legislation, resulting in the severe national security threats in during the 2019 riots. The enactment of the National Security Law brought back peace, prosperity and stability to Hong Kong. I am glad that Hong Kong people have finally acknowledged the importance of safeguarding national security, which protects rather than undermines each of our individual rights.

"One Country, Two Systems" principle remains the best institutional arrangement for the HKSAR which benefits both the HKSAR and the nation as a whole. Yet, we should be mindful that Hong Kong's unique system should not be taken for granted. The essence of "One Country, Two Systems" lies in the fact that Hong Kong's system should be different yet at the same time beneficial to the nation. I am confident that this delicate balance will be maintained in the coming years, thus providing a solid foundation for Hong Kong's "relaunch" under the leadership of Chief Executive John Lee.