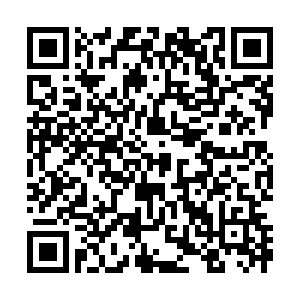 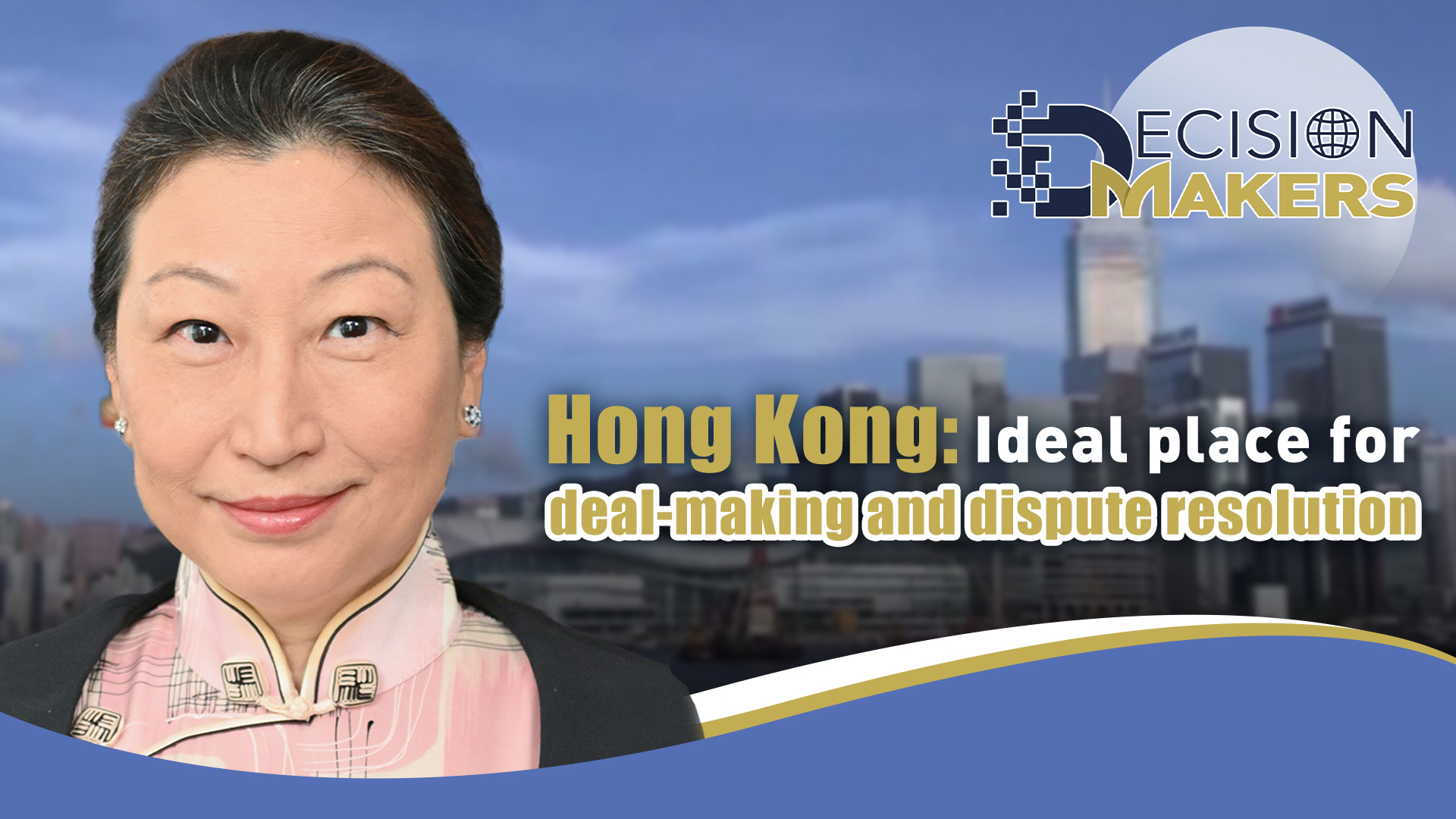 Editor's note: Decision Makers is a global platform for decision makers to share their insights on events shaping today's world. Teresa Cheng, Senior Counsel, is the Secretary for Justice of Hong Kong Special Administrative Region Government. The article reflects the author's opinions and not necessarily the views of CGTN.

This year marks an important milestone for our city as we celebrate the 25th anniversary of the establishment of the Hong Kong Special Administrative Region (HKSAR). Over the years, Hong Kong has been capitalizing on its unique role in bridging the Chinese mainland and the world, reinforcing the status as an international center for deal-making, legal and dispute resolution services.

Hong Kong's unique position and advantages can undoubtedly be attributed to the strong backing and support of the central government, as evidenced by the steadfast implementation and staunch support of "one country, two systems" and in seminal documents such as the 14th Five-Year Plan, which reiterate the need for Hong Kong's long-term prosperity and stability to be maintained and explicitly provides for Hong Kong to establish itself as the center for international legal and dispute resolution services in the Asia-Pacific region. Hong Kong is also well placed to take advantage of national development plans such as the Outline Development Plan for the Guangdong-Hong Kong-Macao Greater Bay Area and the Belt and Road Initiative.

The continued success of Hong Kong is very much tied to the upholding of the rule of law which is predicated upon our legal system and an independent judiciary. As the Chief Justice of the Court of Final Appeal remarked in his address at the Ceremonial Opening of Legal Year 2022, "Hong Kong is a society governed by the rule of law…The rule of law ensures and promotes fairness, equality and justice, which are the core values in the administration of justice under our system of law."

The independence of Hong Kong's judiciary is constitutionally guaranteed by the Basic Law which expressly provides that an independent judicial power, including that of final adjudication, is exercised by the Judiciary, free from any interference. Judges enjoy security of tenure and immunity from legal action in the performance of their judicial functions. The only criteria upon which judges are appointed is their judicial and professional quality. These safeguards ensure that our judges, who took the judicial oath upon their appointments, administer justice without fear or favor, based only on the law and evidence before them.

Since our return to the Motherland, Hong Kong's rule of law has been recognized globally in the Worldwide Governance Indicators project of the World Bank. According to the project, Hong Kong's percentile ranking in respect of the rule of law was 69.85 in 1996. With the full implementation of "one country, two systems" and safeguards provided for by the Basic Law, Hong Kong reached 74.75 in 2000, and has been making significant improvement by consistently ranking above 90 since 2003.

Last year, Queen Mary University of London released the 2021 International Arbitration Survey, where Hong Kong was ranked the third most preferred seat for arbitration worldwide, surpassing Paris, reaffirming that Hong Kong as a seat of arbitration is a safe and obvious choice of established quality for dispute resolution.

With the increase in cross-border activities and the advent of technologies that significantly change the business, legal, and dispute resolution landscape, we all are facing ever-changing challenges in this age of globalization and must innovate, adapt, and constantly improve, focusing on our unique advantages. One way we have achieved this is by riding on "one country, two systems" and establishing one-of-a-kind arrangements with the mainland that no other jurisdiction in the world has been able to.

Since July 1997, we have signed nine arrangements on mutual legal assistance in civil and commercial matters with the mainland, which allow us to foster and promote Hong Kong as a legal gateway into China and the ideal choice for the resolution of mainland-related disputes.

These arrangements provide distinct benefits. For example, in arbitration, under the interim measures arrangement and the supplemental arrangement on the enforcement of arbitral awards we have concluded with the mainland, parties to Hong Kong arbitrations can seek protection measures from the mainland courts such as the freezing of assets and injunction during the arbitration, and at the start of the court proceedings for recognition and enforcement of the Hong Kong awards. This is unique to Hong Kong.

Another example is Hong Kong's arrangement with the mainland on the reciprocal recognition and enforcement of civil and commercial judgments, allowing Hong Kong court judgments to be enforceable in the mainland. This arrangement goes beyond what has been negotiated internationally by the Hague Judgments Convention by providing for the mutual enforcement of certain intellectual property judgments. It will also greatly reduce the need to re-litigate the disputes in the enforcing jurisdiction and avoid the complicated litigation procedures in the other jurisdiction for the judgment creditor to recover his or her judgment debt. 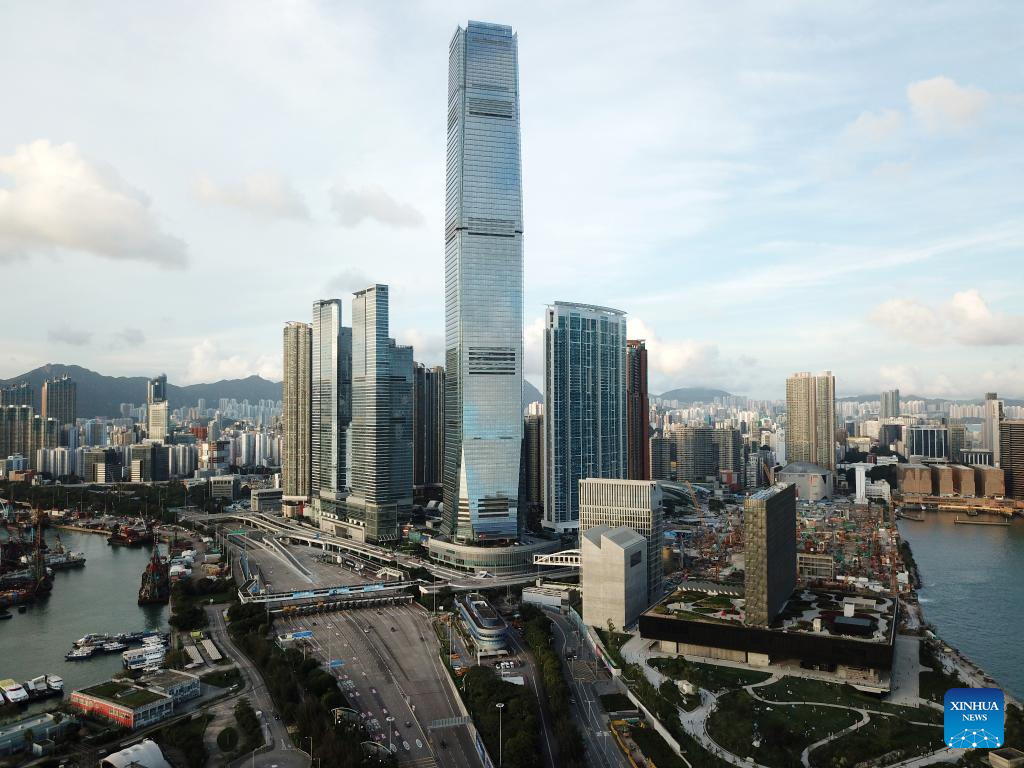 Additionally, in 2021 HKSAR government signed a record of meeting concerning the mutual recognition of and assistance to insolvency proceedings with the Supreme People's Court, establishing a new co-operation mechanism in which liquidators and provisional liquidators from Hong Kong may apply to specific courts in the mainland for recognition and assistance.

Similarly, bankruptcy administrators from the mainland may continue to apply to our High Court for recognition and assistance according to the existing common law principles in Hong Kong. It provides creditors with a mechanism between the two jurisdictions by which debts could be recovered. This will further improve the business environment and thereby attract more business investing into the mainland market through Hong Kong. Hong Kong is the only jurisdiction to enjoy such a unique co-operation mechanism with the mainland in this area.

We are keen on developing Hong Kong as a hub for international legal, dispute resolution, and deal-making services. Not only does Hong Kong have an open and transparent market providing for a level playing field that encourages fair completion, Hong Kong also has a wealth of talent with expertise which facilitates this, with around 12,500 solicitors and barristers and more than 1,500 registered foreign lawyers from 33 different jurisdictions.

Furthermore, some of our Hong Kong lawyers have been qualified to practice in certain aspects of laws of People's Republic of China in the GBA area. Lawyers in Hong Kong are multi-lingual and well-equipped in handling cross-border transactions and providing bespoke legal services for both Chinese and overseas businesses.

As one of the most competitive economies in the world, it is no wonder that in the latest World Competitiveness Yearbook 2022 published by the International Institute for Management Development, Hong Kong was ranked fifth globally, up two places from last year. Among the four competitiveness factors in the Yearbook, Hong Kong continued to rank favourably in "Government efficiency" and "Business efficiency," and has improved rankings in "Economic performance" and "Infrastructure." Hong Kong continues to top the rankings in the "Business legislation" sub-factor and was amongst the top three in "Public finance," "Tax policy," and "International investment" sub-factors.

Hong Kong's international connectivity is well protected under the Basic Law. There are freedom of communication, freedom to travel, free flow of capital and free movements of goods.Furthermore, with the authorization of the central government, Hong Kong has concluded and implemented international agreements with foreign jurisdictions in the areas of investment promotion and protection, free trade, tax, air services, etc.

As the only jurisdiction in the world that has a truly bilingual common law system and being the sole common law jurisdiction in China, we should leverage on these advantages and our proximity as well as exclusive arrangements with the mainland to further enhance our position as an international hub for business, investment, deal-making, and legal and dispute resolution services.