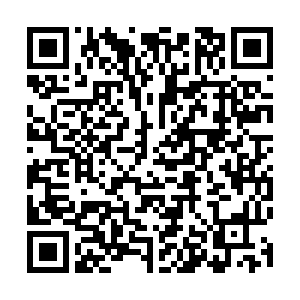 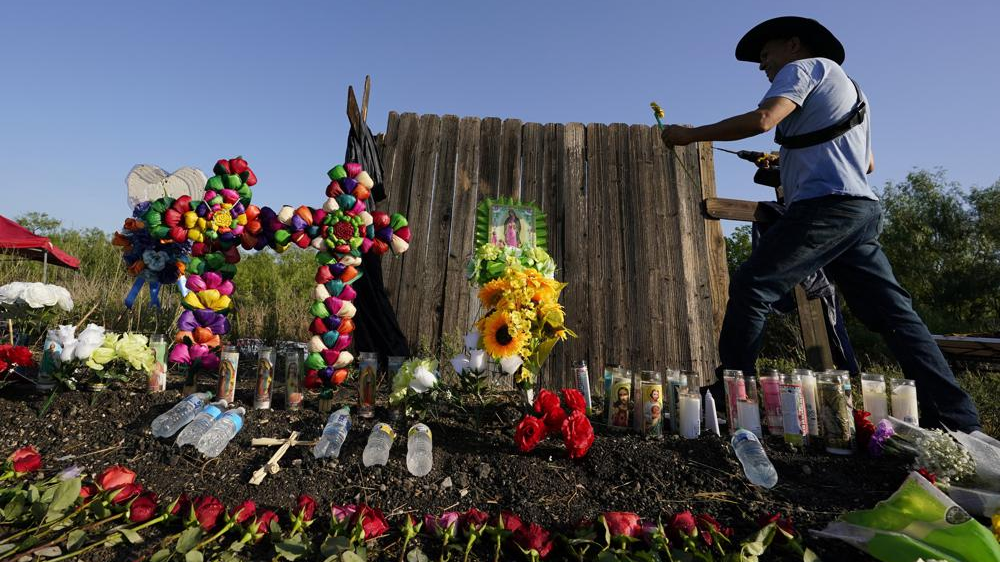 A makeshift memorial has been created at the site where officials found dozens of people dead in an abandoned semitrailer containing suspected migrants, Wednesday, June 29, 2022, in San Antonio. /AP

A makeshift memorial has been created at the site where officials found dozens of people dead in an abandoned semitrailer containing suspected migrants, Wednesday, June 29, 2022, in San Antonio. /AP

At least 53 migrants have been confirmed dead after dozens of bodies were discovered inside a sweltering semitruck container on Monday. Officials said 16 people, including four children, had been taken to the hospital.

Survivors suffered from heat strokes and were described as "hot to the touch."

The abandoned truck had been left parked next to railroad tracks on the outskirts of San Antonio, where temperatures have reached record highs of close to 40 degrees Celsius in recent weeks.

"They had families... and were likely trying to find a better life," San Antonio Mayor Ron Nirenberg said. "It's nothing short of a horrific, human tragedy."

The incident is among the deadliest human trafficking tragedies in the U.S. A majority of the victims are from Latin America, including 22 Mexicans, seven Guatemalans and two Hondurans, according to Mexican officials.

Two suspects, both Mexican nationals, have been charged with possessing firearms and residing in the U.S. illegally, according to court documents. An American citizen identified as the driver and a third suspect have also been arrested and are expected to be charged.

The gruesome discovery has once again put the country's political division over border policy under the spotlight. The Texas Republican Governor Greg Abbott, who has made immigration a focal point of his reelection campaign, put the blame squarely on U.S. President Joe Biden.

"They are a result of his deadly open border policies," tweeted Abbott. "They show the deadly consequences of his refusal to enforce the (immigration) law." Other Republicans also joined in on the verbal crusade against Biden, whose approval rating has slipped to record lows in recent weeks.

Biden quickly fired back after landing in Madrid for the NATO summit. "Exploiting vulnerable individuals for profit is shameful, as is political grandstanding around tragedy," he said in a statement. He called the deaths "horrifying and heartbreaking," and said that "this incident underscores the need to go after the multi-billion-dollar criminal smuggling industry preying on migrants and leading to far too many innocent deaths."

Since taking office, Biden has attempted to reverse many Trump-era immigration policies, including halting construction of the Mexican border wall, ending Trump's travel ban on 14 countries and issuing an executive order to reaffirm protections for DACA (eligible immigrants who came to the United States when they were children) recipients. His critics say these actions sent the wrong signals to migrants from Latin America, who are trying to enter the U.S. through its southern border in record numbers under the Biden administration.

However, many of Trump's hostile measures toward immigrants remain in place and continue to tighten border control due to judicial intervention.

In May, a U.S. district judge issued a nationwide injunction barring the Biden administration from lifting "Title 42" enacted by Trump. The policy allows U.S. authorities to turn away most migrants using the emergency context of the COVID-19 pandemic. It also includes the contentious policy known as "Remain in Mexico," which forces asylum seekers fleeing violence and persecution in their home countries to await their court dates in dangerous conditions in Mexico.

"The United States is not responsible for solving the transnational crime, migration management, and border security issues in Mexico and northern Central America," a recent Republican minority Senate Committee on Foreign Relations report on migration concluded. It recommended, instead, that the administration "use all available tools to secure the border" right now, including Trump's Title 42 move and the "Remain in Mexico" policy.

Many people attempt to cross the border over and over again, trying to go through without being detected.

"Unfortunately, every time a person crosses the border like that, they're rolling a dice and they're taking a chance that tragedy might occur," Aaron Reichlin-Melnick, policy director of the American Immigration Council, told PBS NewsHour after the tragedy.

"The reality is, the vast majority of people who come to our border and seek a better life have no legal ways to enter," he said. "And over the last 30 years, we have made the border harder and harder to cross in the safe locations, which has driven people into more and more dangerous routes."