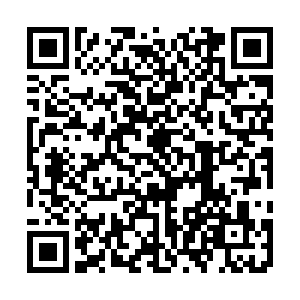 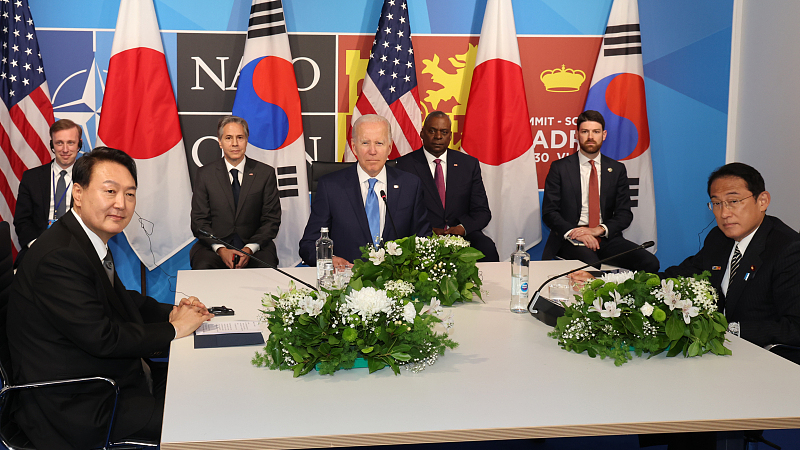 Editor's Note: Zhou Wenxing is assistant professor at School of International Studies, Nanjing University and former Asia Fellow at John F. Kennedy School, Harvard University. He writes extensively on comparative politics and international relations, with an emphasis on the Taiwan issue and China-U.S. relations. The article reflects the author's opinions and not necessarily the views of CGTN.

The North Atlantic Treaty Organization (NATO) leaders gathered in Madrid on from June 28 to 30 to discuss important issues facing the world's largest peacetime military alliance. The summit has been widely watched mainly because the military bloc appears committed to a "fundamental shift" in its deterrence and defense in the context of the Russia-Ukraine conflict. Apparently, the NATO leaders have discussed more specific measures to counter Russia and to support Ukraine.

Another trend worth paying attention to is that the summit has mentioned China for the first time and made it part of NATO's Strategic Concept, the blueprint directing the alliance's trajectory in the next decade. According to the new Strategic Concept endorsed by NATO leaders on June 29, the alliance is committed to addressing the "systemic challenges" posed by China while claiming that it would "remain open to constructive engagement" with the world's second largest economy.

As said by NATO Secretary General Jens Stoltenberg at the start of the summit, making China part of the Strategic Concept reflects "a new reality." One may wonder what the new reality is. The answer lies in an active role the U.S. plays in advocating a new "China threat."

U.S. President Joe Biden vowed to build a global anti-China united front with U.S. allies and partners before his inauguration and spared no efforts to push this agenda over the past year. Since the outbreak of the Russia-Ukraine conflict in February, the U.S. seized the chance to "bind" Russia and China as "authoritarian regimes" and called for more joint efforts from its democratic European and Asian allies to counter China's rising influence.

As a crucial step to deter China in terms of security and military, Washington has doubled down on its efforts over the Asianization of NATO, expanding the influence of the European military organization into the Asia-Pacific and transforming it into a key tool to contain China.

To this end, the Biden administration invited four Asia-Pacific countries, i.e., Japan, South Korea, Australia and New Zealand, for the first time to the NATO summit as "like-mined partners." Nevertheless, the four countries took part in the summit with different purposes. 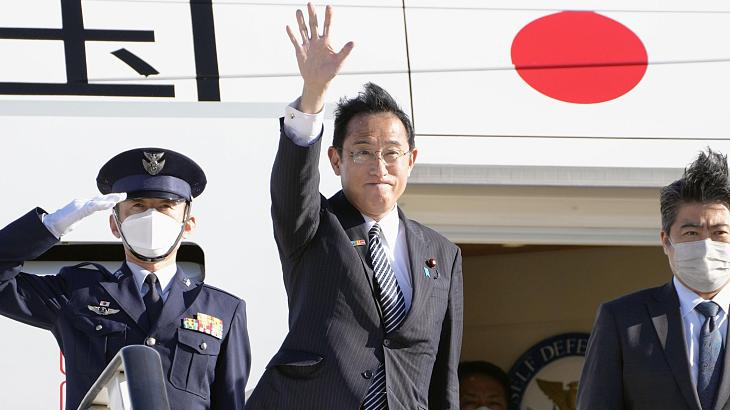 All signs indicate that Japanese Prime Minister Fumio Kishida's cabinet has already adopted a steadfast anti-China approach by following the U.S.'s China policy closely. Kishida and other senior Japanese leaders have been very vocal on the Taiwan question, claiming that "a Taiwan contingency is a Japan contingency." In order to prevent such a "contingency" in the Taiwan Straits and to enhance readiness in response to it, Tokyo has strengthened its military and intelligence cooperation with Washington. In Japan's view, attending the NATO summit would help contain China's influence and also bolster its quest for a great-power status.

As for South Korean President Yoon Suk-yeol, however the pending DPRK nuclear crisis remains the top priority on his political agenda. Yoon views his participation in the NATO summit as an opportunity to address the rising uncertainty over the Korean Peninsula situation. Indeed, Yoon has partly achieved this goal via the trilateral meeting with his Japanese and American counterparts on the sidelines of the NATO summit. The leaders of the three allies agreed on closer cooperation over the peninsula nuclear threat.

The U.S., Japan and South Korea have found countermeasures to tackle the nuclear issue and China's influence. But neither the NATO summit nor the U.S.-Japan-ROK trilateral meeting would usher in momentum to improve Japan-South Korea ties and then counter China shoulder-to-shoulder.

The two countries have different core interests despite their geographic and historic proximity. South Korea understands that without China's support and assistance, it is impossible for it to deal with the peninsula issue. This is partly why the Yoon administration adopted a less hostile China policy compared with Japan.

Besides, the development of the bilateral ties between Japan and South Korea has also suffered much from historic issues. After the Yoon administration and Kishida cabinet came to office, the two neighboring countries have not alleviated their friction over the issues of "comfort women" and forced labor during World War II. Disputes over the territory of and activities around the Dokdo/Takeshima Islands have sparked new problems.

Furthermore, acrimonious people-to-people ties between the two neighboring countries would only make it harder to develop a cooperative and sustainable bilateral relationship. According to a latest poll conducted by the Seoul-based think tank East Asia Institute and Tokyo-based Genron NPO, more than 63 percent of South Koreans hold unfavorable perceptions of Japan, while nearly half of Japanese respondents see South Korea unfavorably.

The survey suggests that the main factors are the above mentioned historic issues and territorial disputes. People should not expect that these tricky issues to be resolved in near future.

The U.S. inviting non-European partners to join the NATO summit is just the beginning. It is expected to impose growing pressure on its East Asia allies to mitigate their soured ties and consequently counter China jointly. But different diplomatic priorities, conflicting perceptions of historical events, as well as unfavorable views of each other held by the public in Japan and South Korea would make it less likely that the Biden administration could achieve this goal. These differences could never be remedied by a three-day NATO summit.