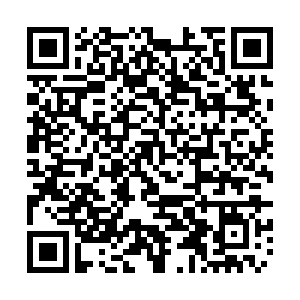 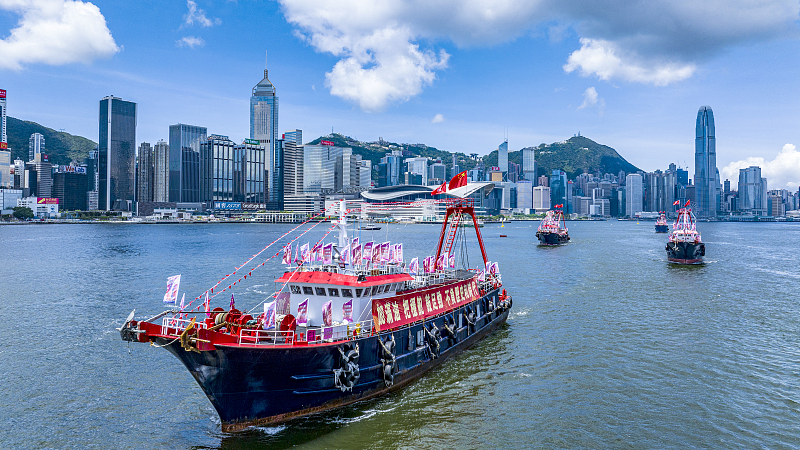 A fleet of 25 fishing boats organized by the Hong Kong Fishermen Consortium sail through Victoria Harbour to celebrate the 25th anniversary of Hong Kong's return to the motherland, June 28, 2022./CFP

A fleet of 25 fishing boats organized by the Hong Kong Fishermen Consortium sail through Victoria Harbour to celebrate the 25th anniversary of Hong Kong's return to the motherland, June 28, 2022./CFP

Since Hong Kong's return to the motherland in 1997, the special administrative region has made remarkable progress in development as a financial hub and is preparing for a more diversified economic structure.

As a global financial hub, Hong Kong's financial market has developed over the past 25 years and still topped in offshore RMB business and bond issuance in 2021 even with the impact of COVID-19. 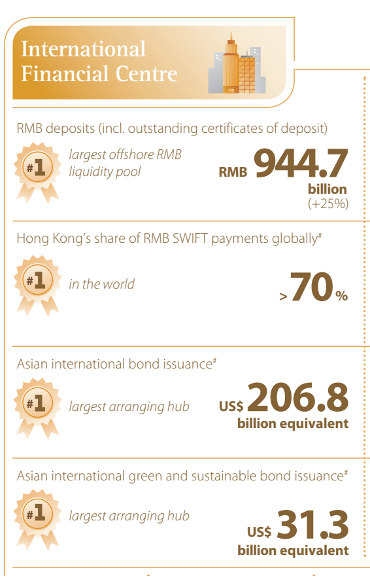 Combined assets of the banking system totaled HK$27 trillion (about $3.4 trillion) in April 2022, more than tripling the size in July 1997.

In addition to expansion in scale, Hong Kong's financial market has played a crucial role in connecting the fast-developing capital market on the mainland to global investors, with turnover of the stock and bond connect programs expanding steadily since their launch.

For instance, the Northbound Bond Connect, which began trading in July 2017, is getting increasingly popular among foreign investors seeking to participate in the mainland onshore bond market. Since then, daily turnover saw a 17-fold increase to 26 billion yuan and currently, more than half of international investors' turnover in onshore bonds is traded through this Connect scheme, according to the 2021 annual report released by Hong Kong Monetary Authority (HKMA).

"I could go on further but suffice it to say, all these figures point to the fact that Hong Kong continues to maintain a firm foothold as the global hub for offshore renminbi business." Eddie Yue, Chief Executive of HKMA said in the 2021 annual report.

Hong Kong has also emerged stronger as trade and shipping center. It has been consistently rated by global institutions as one of the freest and the most competitive economies with a world-class business environment.

Although Hong Kong's status as an international maritime center is already shipshape, HKSAR government has stepped up efforts in promoting the development of the maritime industry in recent years, including developing professional maritime services, accelerating digital transformation and seizing opportunities related to the Guangdong-Hong Kong-Macao Greater Bay Area (GBA).

While progress has been made, it's not always smooth sailing.

The financial market in Hong Kong has weathered multiple crises, including the 1997 Asian financial crisis, the 2003 SARS outbreak, the 2008 global financial tsunami, the 2019 chaos and riots undermining the region's economy, as well as the ongoing COVID-19.

Thanks to the unique position, mature business environment, and the support from the mainland, Hong Kong has successfully survived these shocks and prepared for new opportunities.

The GBA, which aims to be a world class bay area and city cluster, has become one of the most open and economically vibrant regions in China.

A growing number of young people from Hong Kong are turning to the mainland for entrepreneurial prospects, as the bay area development has brought about new opportunities.

"Hong Kong today is more stable than ever before. I'm confident that with the staunch support of the central authorities, Hong Kong will have a bright future as it focuses on economic development and leverages its unique advantages," former Chief Executive of the HKSAR Carrie Lam, said in an interview with a group of media from the mainland recently.