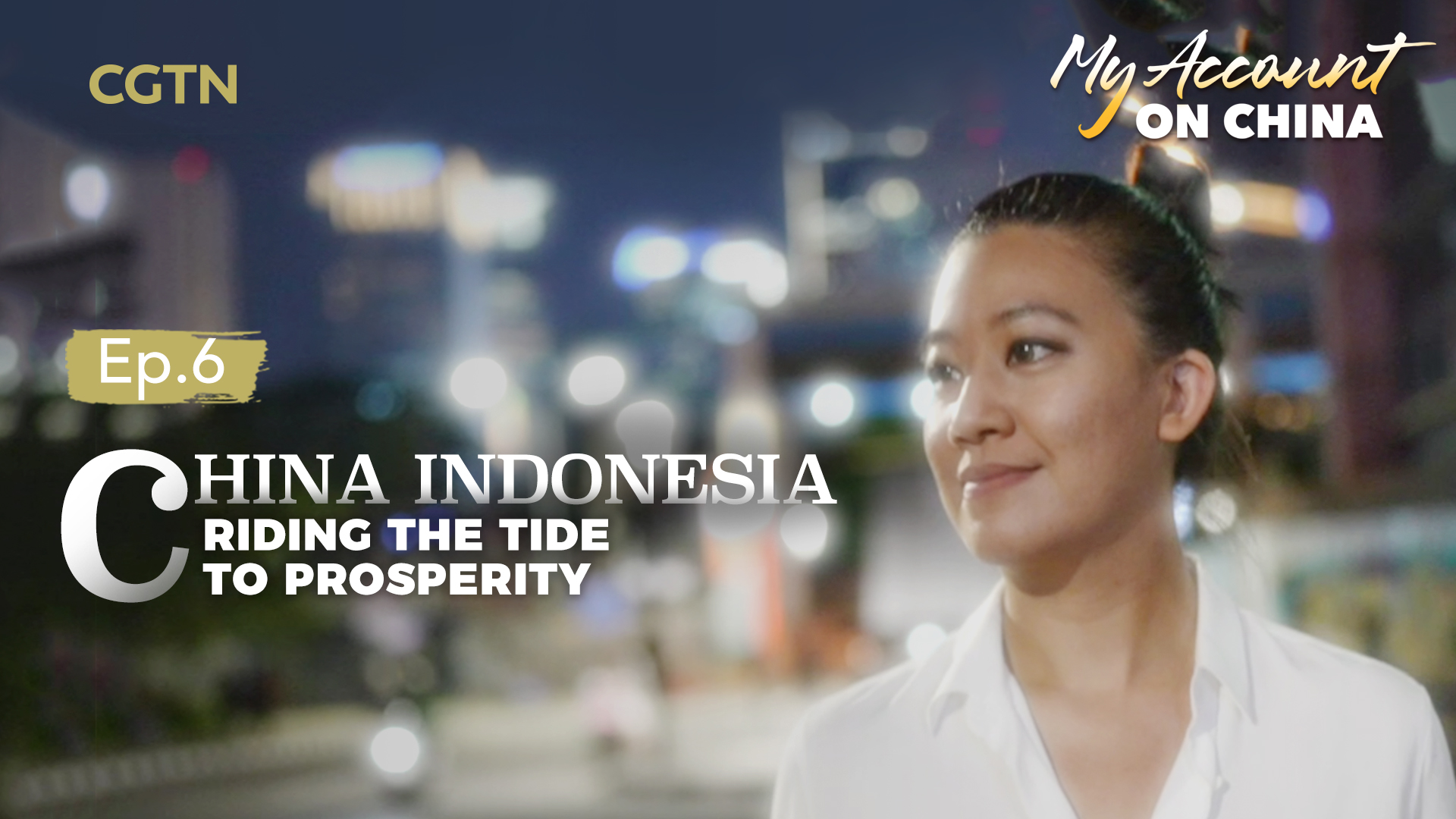 It was around ten years ago since I last visited Indonesia. Coming from Bangkok, there were many things that I expected, things that encompass many major Southeast Asian cities – the sounds, the smell, the details, the heat. But every city has a soul, a character, and the longer I stayed in Indonesia, the more I realized that beneath the obvious lay a deeper, more complex story.

Indonesia is in the throes of a rapid transformation, swept along by its position at the heart of the world's most dynamic economic region. Currently, the 16th largest economy in the world, poised to rack the global economic top 10 by 2030 – that's pretty impressive.

With considerable opportunity, there are also challenges.

Rapid urbanization and high population density have more pressure on existing infrastructure. We soon realized that it's a major problem experienced by everyone living in Jakarta. Even on an ordinary day, a commute down one of Jakarta's major thoroughfares can feel like traveling a road to nowhere. On our first day in Jakarta, my team and I were stuck in bumper-to-bumper traffic for three hours, just to travel 4 kilometers. It's hard to get anything done when a city resembles a massive parking lot. 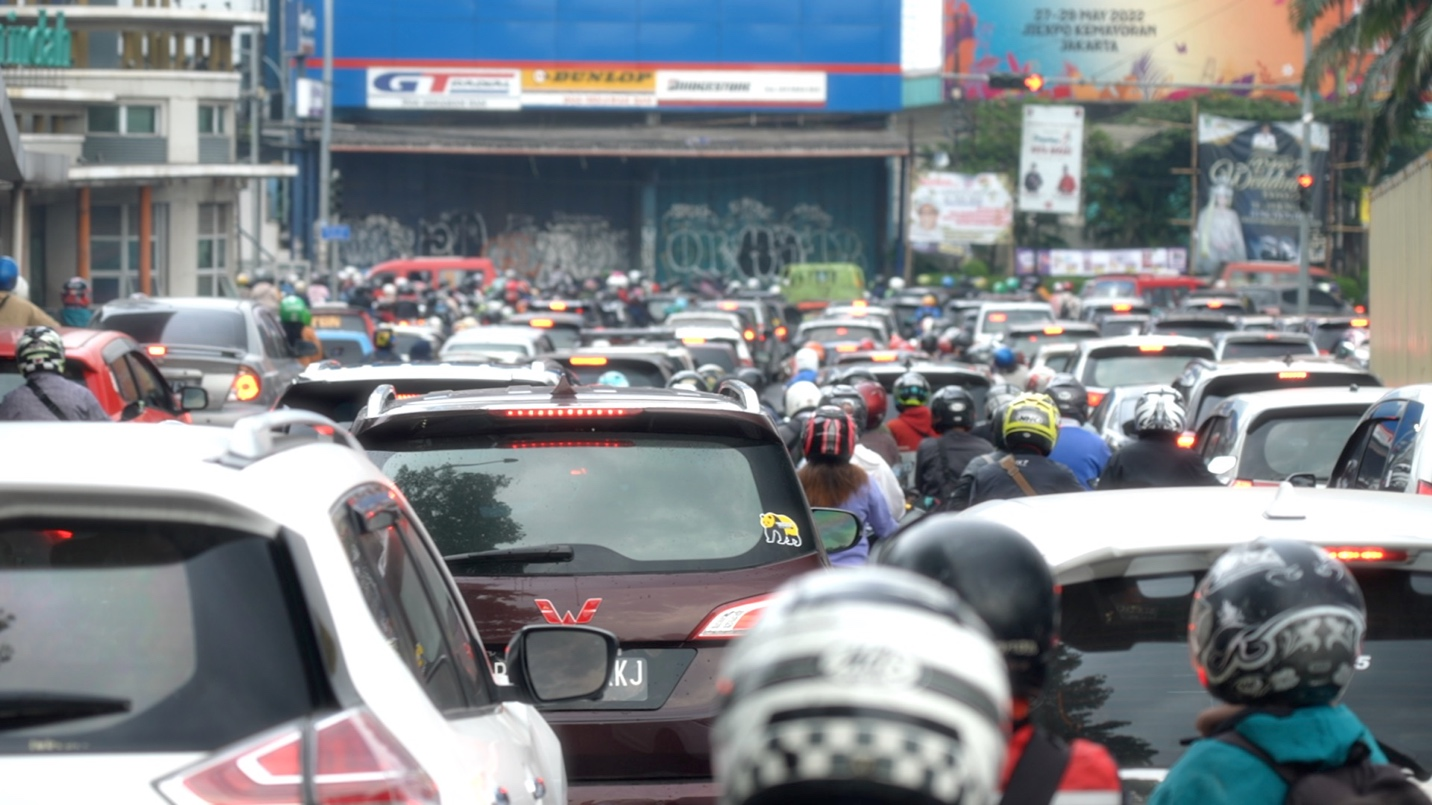 It is said that an average Indonesian spends more than 400 hours a year commuting in Jakarta. I'll go even further, that's 10 years of their life. The most compared to other major Asian cities. /CGTN

It is said that an average Indonesian spends more than 400 hours a year commuting in Jakarta. I'll go even further, that's 10 years of their life. The most compared to other major Asian cities. /CGTN

In order to understand how this impacts the lives of everyday commuters, we met up with Parasian. He lives in Bekasi. Residents here make up the largest source of commuters from outside the capital.

For Parasian, it is a 30-km trip. But the morning commute – by train, then another train, a long walk and a local minibus, ended up taking longer than one might expect on Indonesia's public transportation network. Each workday, he spends up to 5 hours commuting to-and-from work.

But change could be on the horizon.

In 2013, Chinese President Xi Jinping debuted the Belt and Road Initiative as a signature foreign policy. Paving the way to the future and re-invent cities. 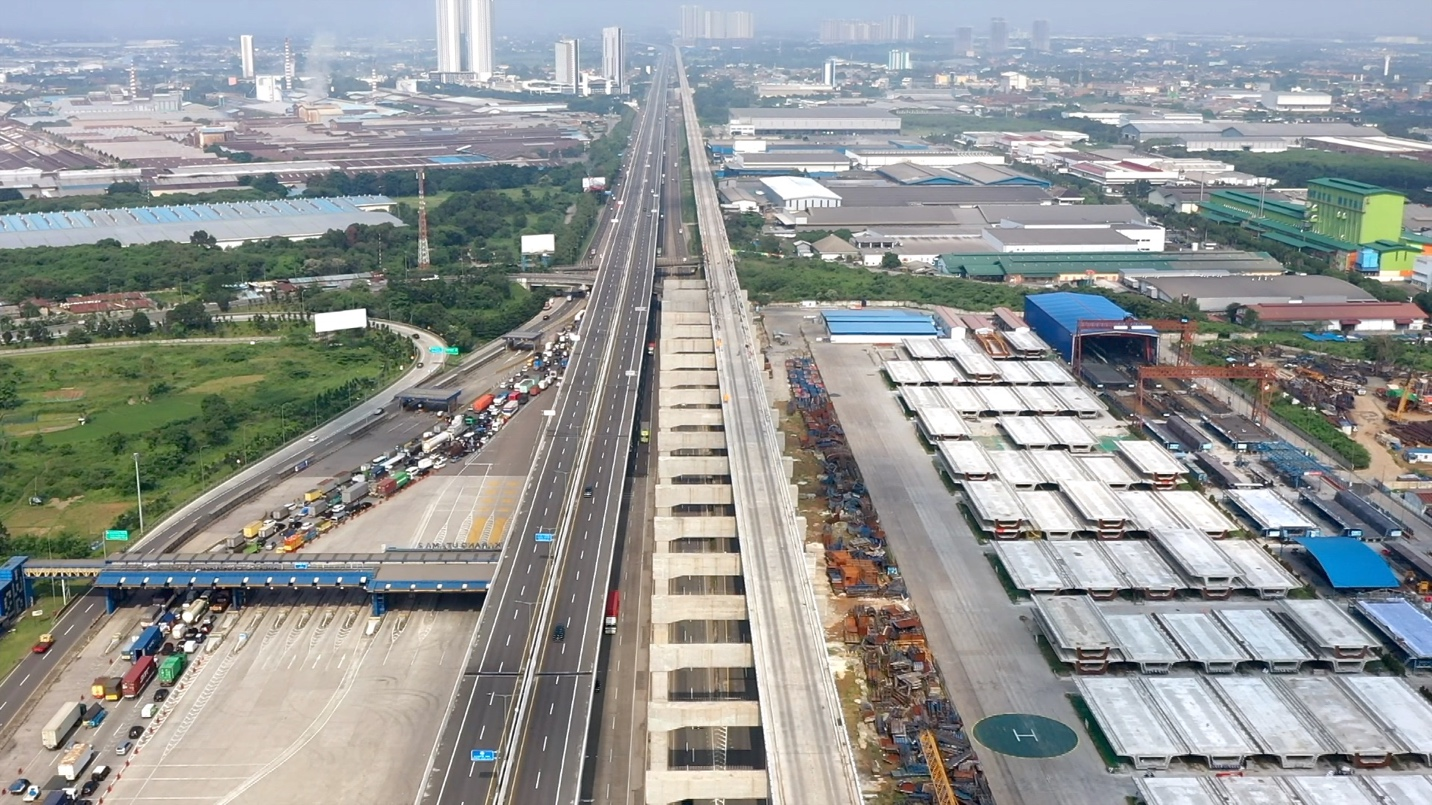 The Jakarta-Bandung High Speed Railway will likely be in operation by mid-2023. /CGTN

The Jakarta-Bandung High Speed Railway will likely be in operation by mid-2023. /CGTN

The plan for Indonesia was for a high-speed railway. The first in the country. The fastest in Southern Asia. An $8 billion infrastructure project that would link Jakarta to Bandung, Indonesia's third-largest city. The vision is for the high-speed train to be integrated with the mass transportation system in Jakarta.

Mr. Zulfikri, Director General of Railways from the Ministry of Transportation, points out that "this high-speed train will be able to provide multiplier effects, not only to facilitate the mobility and connectivity itself but also to become a competitive advantage for our country to compete with other countries." 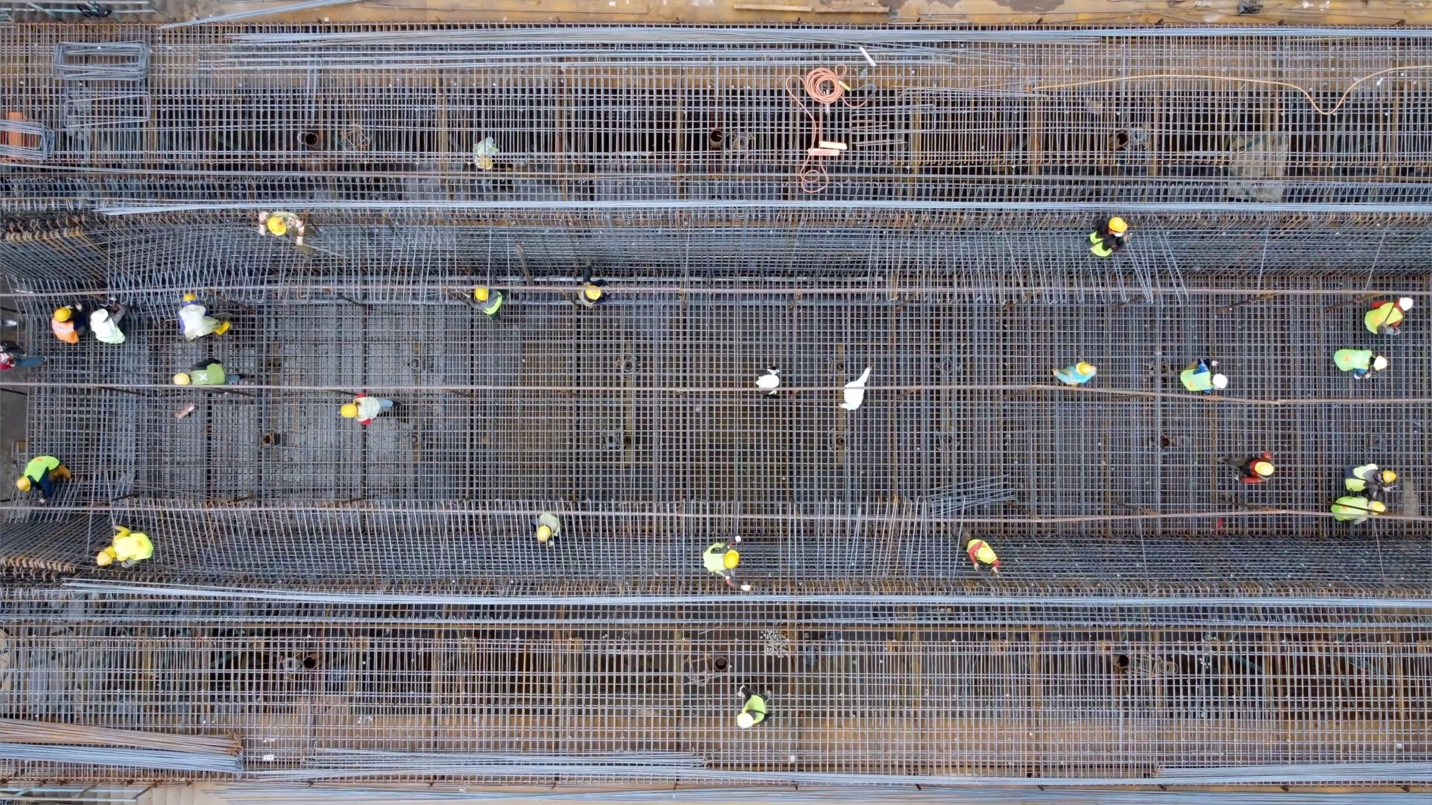 More 85 percent of the workers working on the construction of the Jakarta-Bandung High Speed Railway are Indonesian. This project alone is expected to offer as many as 30,000 jobs to local workers. /CGTN

More 85 percent of the workers working on the construction of the Jakarta-Bandung High Speed Railway are Indonesian. This project alone is expected to offer as many as 30,000 jobs to local workers. /CGTN

Given the brutal magnitude of the capital and technological outlays required for entry into the rail market, the industry is neither for the faint of heart nor those limited in ambition. But a consortium of Indonesian and Chinese companies building the railroad is prepared to get the job done.

Zhang Chao from the high-speed railway project executor PT Kereta Cepat Indonesia China (KCIC) believes that it's a win-win for both countries, stating that "the high-speed railway is one of the infrastructures related to transfer of the technology and knowledge. It will promote the level of the public service of transportation for Indonesia."

Right now, the road from Jakarta to Bandung weaves through the edges of forests, lush mountains and deep river valleys, where constant traffic means the 150 km trip can take more than 4 hours. It took us around 5 hours.

But very soon, that same trip will take less than 40 minutes. Very soon, cities connected to this network will likely explode.

Sixty-seven years ago, during the height of the Cold War, 29 nations gathered here in Bandung and laid the foundation for a nonaligned movement. They walked, joined hands, determined to carve their own future.

There's something magical about walking through the Museum of the Asian-African Conference – the images on its walls, the displays, the archives that recount what these nations experienced and what they achieved that have inevitable defined the shape of the world today, immortalized in what is known as the "Bandung Spirit." 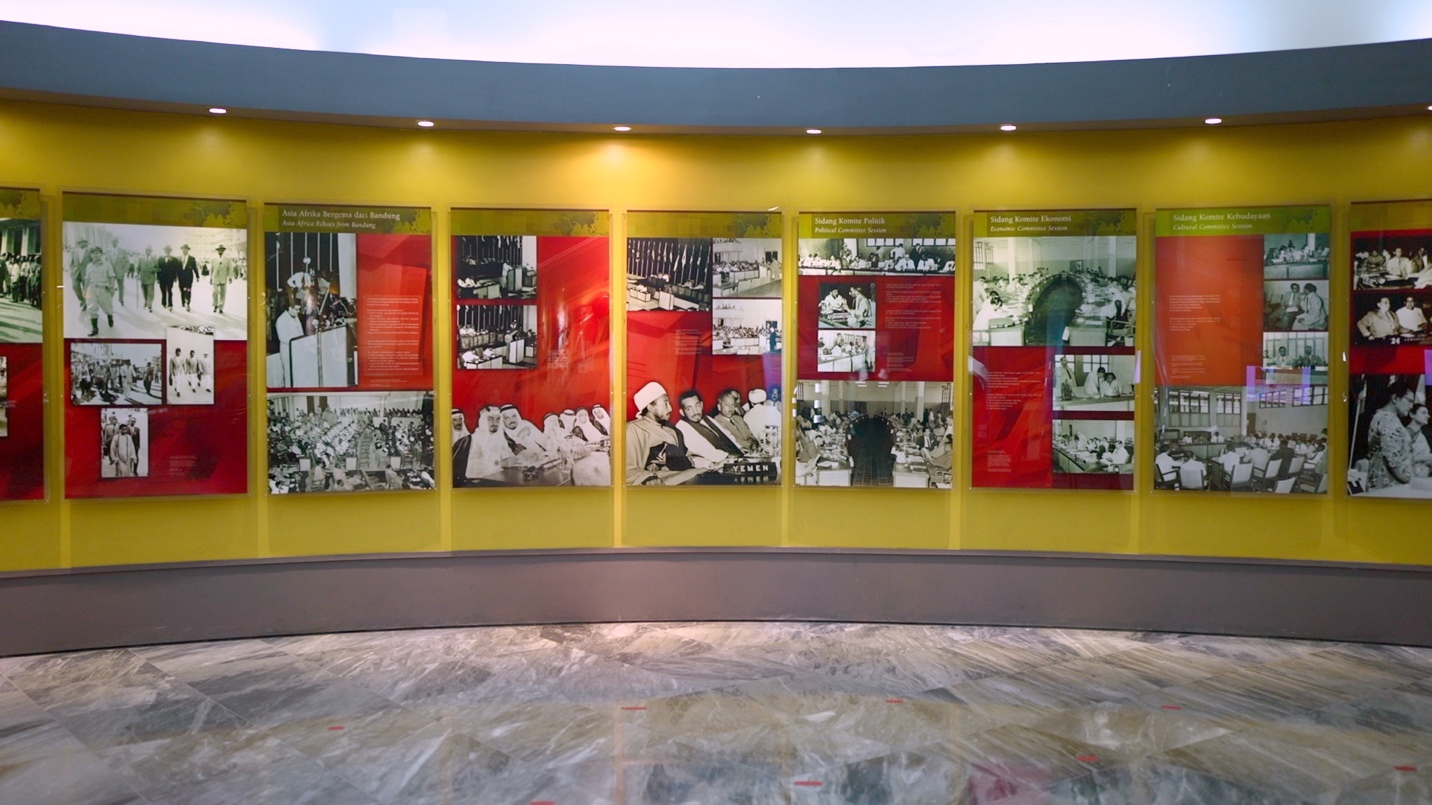 Merdeka Building in Bandung, Indonesia. Today it serves as a museum displaying collections and photographs of the Asian–African Conference, the first Non-Aligned Movement event, which was held there in 1955. /CGTN

Merdeka Building in Bandung, Indonesia. Today it serves as a museum displaying collections and photographs of the Asian–African Conference, the first Non-Aligned Movement event, which was held there in 1955. /CGTN

A spirit that was revitalized in 2015. Together, the nations followed those same footsteps that their predecessors took half a century before.

This was when President Xi urged Asian and African nations to carry forward the Bandung Spirit and work together to promote the building of a community with a shared future for mankind.

Because in today's world, these countries face new threats, new challenges, ones that are no less important than the ones they were confronted with at independence.

And for Indonesia, it's in its collaboration with China to lift millions of its citizens out of poverty.

The uneven distribution of growth across the archipelago and the rising inequality are major concerns for any developing country. Many governments around the world have tried to eliminate urban slums. But many have failed.

These poor communities form organically, a by-product of urbanization. A phenomenon of disparity and migration that persists in even rich nations.

A slum in Jakarta. Across Indonesia, more than 20 million inhabitants reside in more than 3,000 slums. /CGTN

A slum in Jakarta. Across Indonesia, more than 20 million inhabitants reside in more than 3,000 slums. /CGTN

But it is a lot more than just rebuilding or relocation. It is about providing sustainable living.

So, Indonesia implemented "The National Slum Upgrading Program," the first joint co-financing between Asian Infrastructure Investment Bank (AIIB) and the World Bank, an ambitious program that would benefit more than 9.7 million urban poor across the country.

In mid-2016, Indonesia received the first loan from AIIB and promised to disburse $216.6 million in financing into a $1.743 billion project to improve access to urban infrastructure and services in slum areas in 154 cities in central and eastern Indonesia.

We travel to Central Java, where cities are adopting new approaches and new strategies.

They must be doing something right. Central Java has managed to reduce nearly 4,000 hectares of slums since 2014 – that's around 57 percent of the total slum areas in the province.

It is impossible to deny the impact that the National Slum Upgrading Program has had on slum dwellers. All of the slums we visited no longer looked like slums. 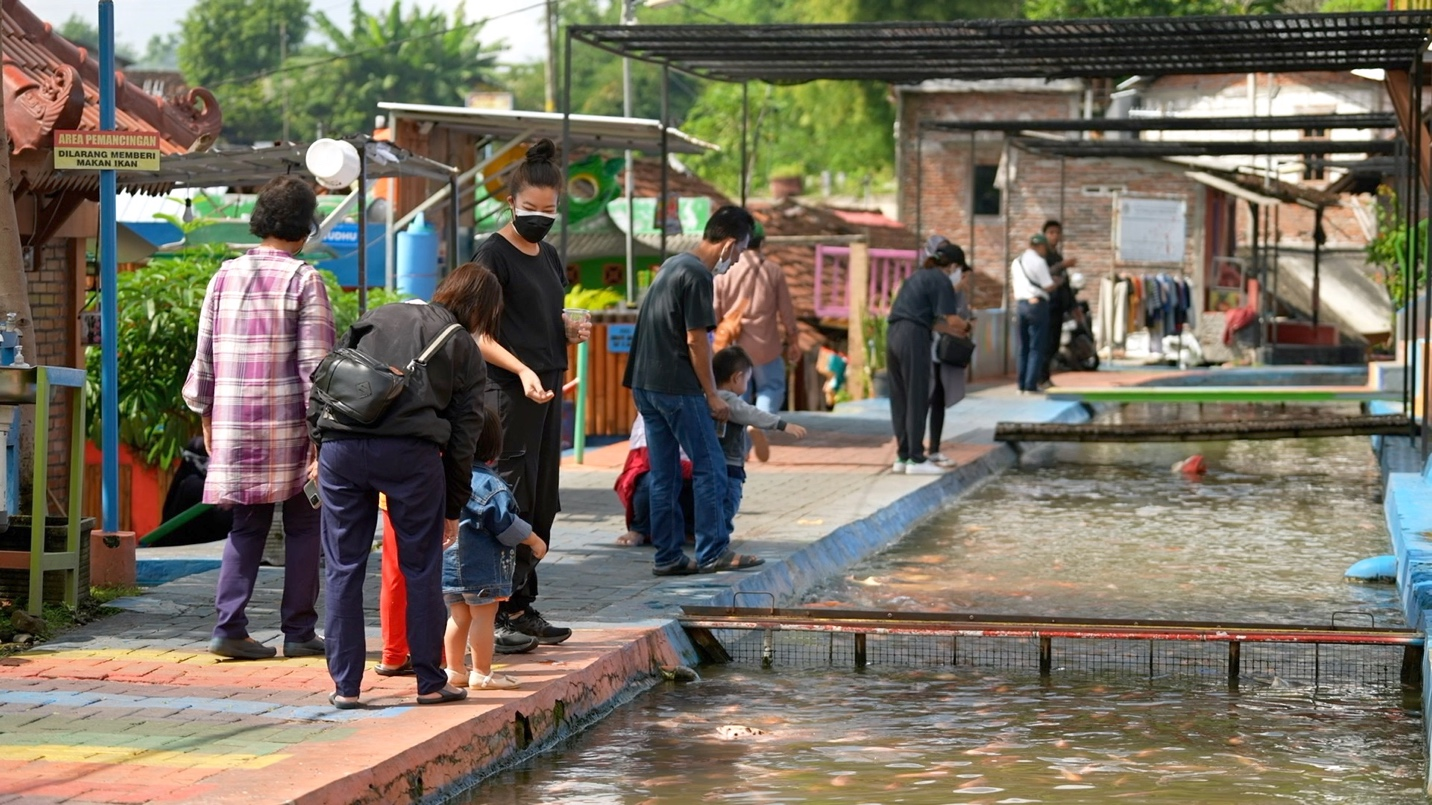 A slum in Yogyakarta has been upgraded to become a cleaner and more comfortable place to live with green open spaces and ponds. /CGTN

A slum in Yogyakarta has been upgraded to become a cleaner and more comfortable place to live with green open spaces and ponds. /CGTN

The labyrinth of pathways that wind through the chaotic landscape that only the slum dwellers can find their way through has now widened to serve as markets, walkways, and ponds. No one was dying of hunger. Instead, residents put on their weekend tour guide caps, welcoming tourists to explore the nooks and crannies that now resemble parks, which in turn feeds their local economy.

Residents have benefited from improved access to basic services, structurally sound houses and shops, a healthy local environment, and a sense of pride and ownership over their neighborhoods.

It wasn't what our team expected. These former "slums" are no longer places of degradation and hard times. No longer "poverty traps" but have transformed into a waiting room to enter a better life.

And through all the progress, development, diplomatic ties and cooperation with China, there is a sense that communities are benefiting from the growth of the cities. The growth is becoming more inclusive. After more than 70 years of ties, the bilateral relations between China and Indonesia have continued to elevate with expanding and deepening cooperation.