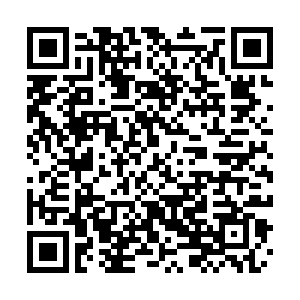 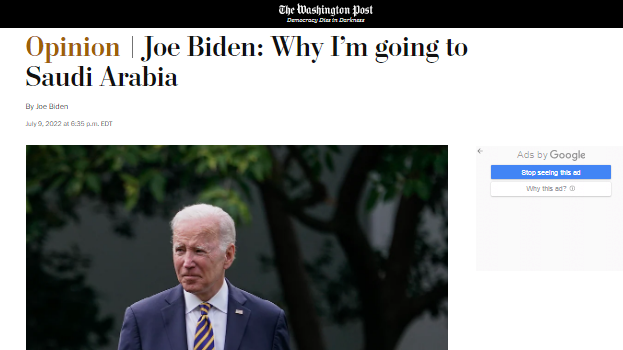 A screenshot of U.S. President Joe Biden's op-ed on the Washington Post

A screenshot of U.S. President Joe Biden's op-ed on the Washington Post

The Washington Post published an op-ed by U.S. President Joe Biden Saturday, explaining what he aims to achieve on his trip to the Middle East starting on Wednesday. Apparently, it was released in response to the immense grassroots pressure that he's received for the Saudi Arabia leg of his regional sojourn. Critics claim that the Saudi trip contradicts American values, principally due to accusations that Saudi Crown Prince Mohammed bin Salman (MBS) ordered the killing of journalist Jamal Khashoggi at the Saudi consulate in Istanbul.

Washington intends to maintain its strategic partnership with Riyadh and Biden defended his scheduled visit to Saudi Arabia by reaffirming his commitment to human rights. But that won't be sufficient to placate his rising number of critics. The rest of the op-ed amounts to him peddling a series of mischaracterizations to claim his regional policy has benefited the Middle East. Well, he's wrong on that line of argument.

According to the American leader, "The frequency of Iranian-sponsored attacks compared with two years ago has dropped precipitously." That's not due to him ordering strikes against those his government claimed were responsible. It's more connected with negotiations over the Iranian nuclear deal. He said Tehran has since become "isolated," yet this is contradicted by their 25-year strategic cooperation agreement with China signed last year.

Additionally Biden claims that he has ushered in more peace in Yemen than it's seen in the past seven years. While it's true that his administration attempted to pressure Saudi Arabia and that the recent truce in the war-torn country has held thus far, that outcome should be more attributed to all the combatants' growing fatigue over the long drawn-out conflict. It was inevitable, as many earlier predicted, since conditions would eventually calm down there. 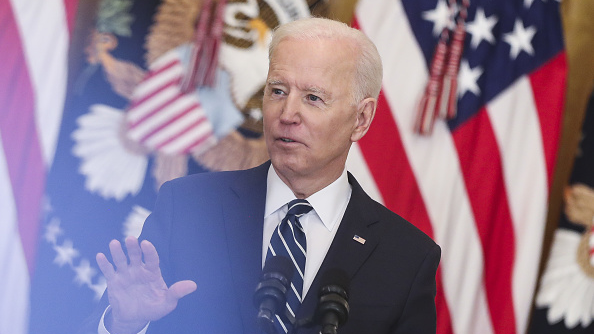 U.S. President Joe Biden speaks during a news conference in the East Room of the White House in Washington, D.C., the U.S., on March 25, 2021. /Getty

U.S. President Joe Biden speaks during a news conference in the East Room of the White House in Washington, D.C., the U.S., on March 25, 2021. /Getty

It's inexplicable why Biden also claimed credit for ending the Israel-Palestine war in Gaza. Washington had nothing to do with that outcome, yet the American leader wants to make it seem like he did something behind the scenes to pressure its ally Israel. But nothing of the sort happened. The conflict ended after both sides claimed victory and observers remain divided over who won. Either way, it was the result of the Israeli-Palestinian military dynamics and not U.S. diplomacy that ended the war.

The most ridiculous statement about his trip relates to Russia and China. He wrote, "We have to counter Russia's aggression, put ourselves in the best possible position to outcompete China, and work for greater stability in a consequential region of the world. To do these things, we have to engage directly with countries that can impact those outcomes. Saudi Arabia is one of them." This fake news can be easily debunked.

Riyadh has practiced a policy of principled neutrality, not just towards the Ukrainian conflict by defying heavy American pressure over sanctions on Russia, but also towards the U.S.' unprovoked aggression against Beijing. Instead of distancing itself from these two major countries, Saudi Arabia has continued to enhance relations with them. Both now stand as among its top partners, especially in the energy domain.

Crown Prince MBS has pioneered a place for Saudi Arabia in the global systemic transition to multipolarity. He defends its hard-earned strategic autonomy and doesn't submit to demands from anyone, not even Saudi Arabia's close American partner. The U.S. has failed to coerce this country into unilaterally conceding on issues of national interests, such as its mutually beneficial relations with Moscow and Beijing.

It's therefore expected that any such attempts will similarly fail, as they will with Israel too, which also enjoys excellent relations with both the countries. Just like Saudi Arabia, Israel also hasn't sanctioned Russia despite the American pressure to do so, nor has it deployed military equipment and weapons in Ukraine. The U.S. was also unsuccessful in getting Israel to economically distance itself from China, particularly concerning a Chinese company's operations in the Haifa Port.

Altogether, Biden's op-ed has done more harm than good to his image in the Middle East. He falsely claimed credit for several important developments in the region and said his trip is partially motivated by the wish to contain Russia and China. The American leader has lied about the first and remains delusional about the second, which should concern all of his fellow citizens and the world at large.