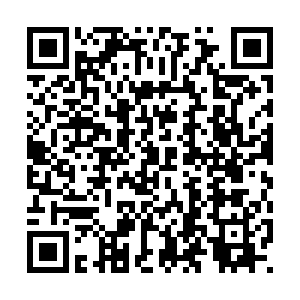 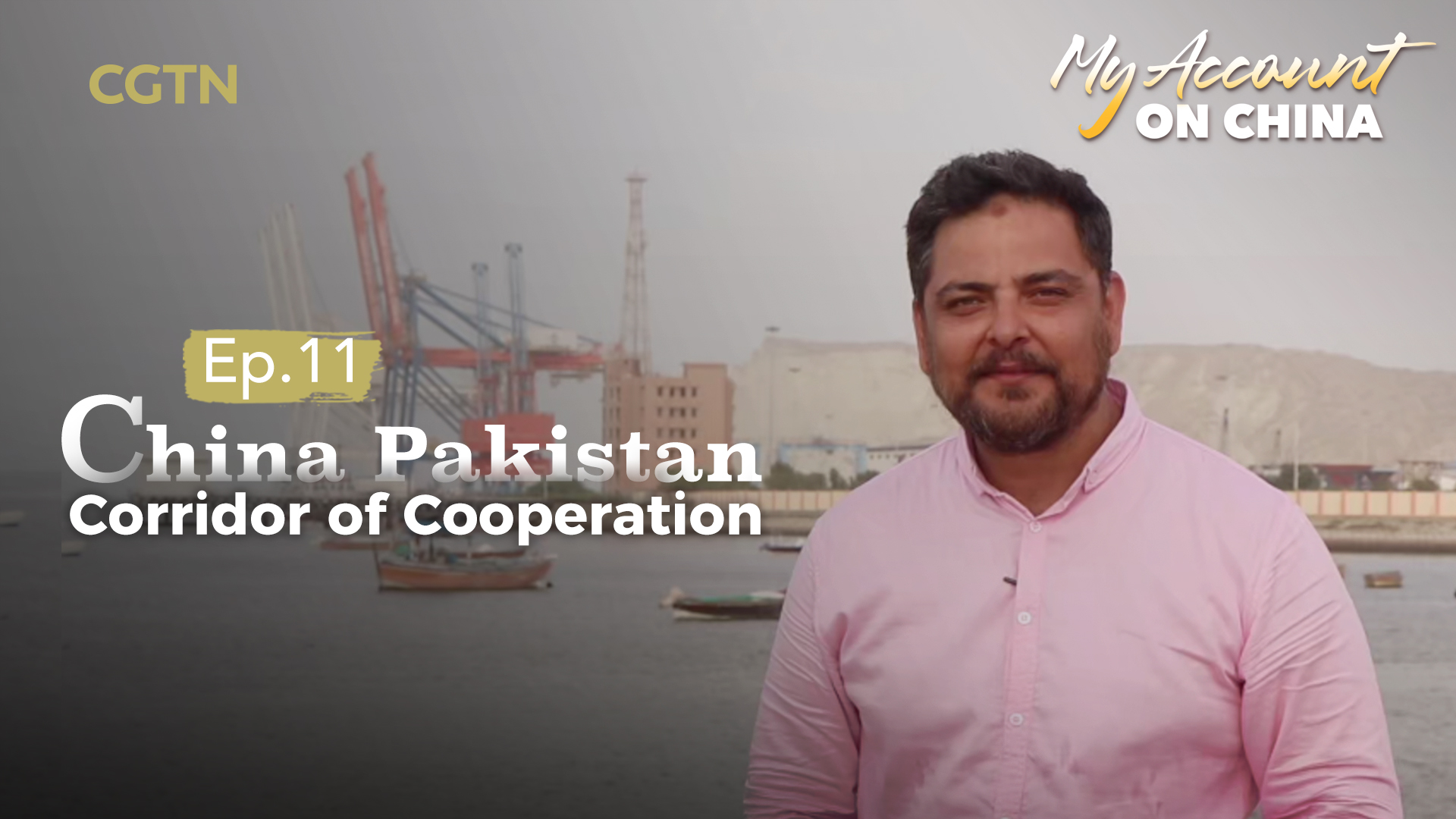 We used to travel to northern Pakistan every year. My late father, a retired government officer, was an adventurer at heart.

I remember, at the time, there were barely any roads going up the massive northern mountain ranges.

At that time, a younger me could never have imagined that I would ever see the construction of infrastructure, something my father believed would transform Pakistan.

And today, when I travel to the north, I can understand what he meant.

In the past, the border would be closed for many months, during the winter season, due to heavy snowfall, landslides and no road. But now it has become the gateway to the multi-billion-dollar China-Pakistan Economic Corridor (CPEC).

Built with Chinese assistance, many engineers from China and Pakistan lost their lives during the construction of the Karakoram highway, an unthinkable mega project. They were buried in the city of Gilgit. 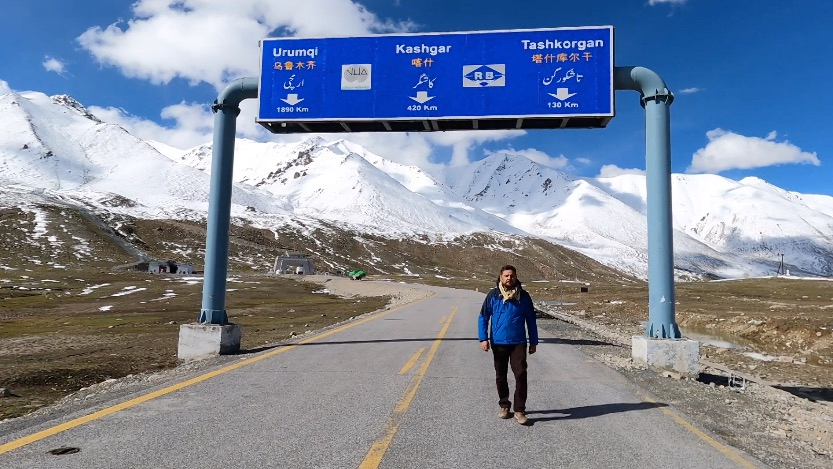 The Khunjerab pass, border between Pakistan and China, at over 15,000 feet above sea level. /CGTN

The Khunjerab pass, border between Pakistan and China, at over 15,000 feet above sea level. /CGTN

Ali Ahmad Jan, 70, has been the caretaker of the Chinese memorial graveyard for the last 44 years, since it was built in 1978.

"During the construction, 210 people were severely injured and 200 people lost their lives; 88 of the dead are buried here. The friendship between China and the people of our country is deep-rooted, and I wanted this friendship to prosper," Ali said.

"Since the Chinese have come to Pakistan, our area has become prosperous. It was cold, it has become warm, it was dark, but now it is lit," Ali said.

On April 20, 2015, when President Xi Jinping arrived in Pakistan, he conferred Ali with several awards for his service to the departed.

"When Xi Jinping came, I was awarded a gold medal, a presidential award. I am very thankful to them that they gave so much respect to a nobody like myself, I thank God, and I thank both the governments."

And this memorial, built along the Karakoram highway, is a testament to the very hardships, and it has become a reminder of friendship and mutual cooperation between China and Pakistan for generations to come. 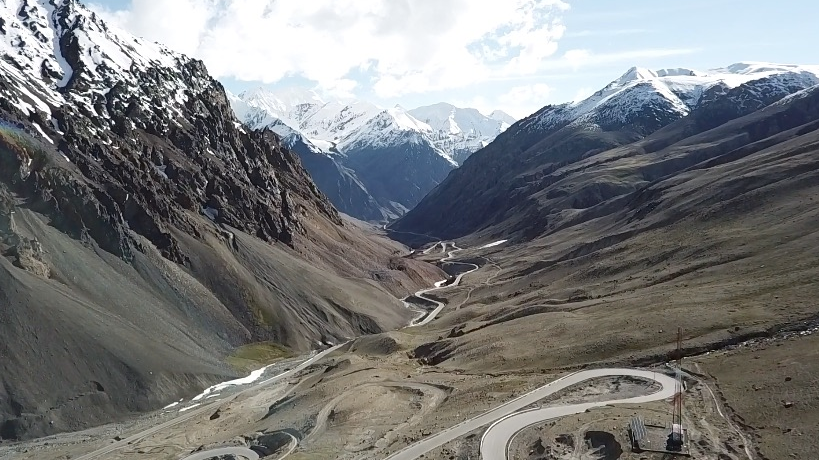 The Karakoram highway has become a symbol of friendship between China and Pakistan. It is also called the eighth wonder of the world. /CGTN

The Karakoram highway has become a symbol of friendship between China and Pakistan. It is also called the eighth wonder of the world. /CGTN

From one road to another, the largest transport infrastructure project to date in the China-Pakistan Economic Corridor and a key project of China-proposed Belt and Road Initiative is the Peshawar-Karachi Motorway (PKM).

The motorway is a shining symbol of bilateral cooperation. The 392-kilometer-long project, which is the main artery of transportation between Pakistan's north and south, uplifted local economies along its route.

More than 30,000 local workers were hired during the peak period of construction, accounting for 97 percent of total employees.

Qaisar, 34, is one of the talents recruited to build the motorway. His knowledge of Chinese also proved to be a valuable asset to overcome difficulties like security, lack of resources, high temperatures and the pandemic to complete the mega project. 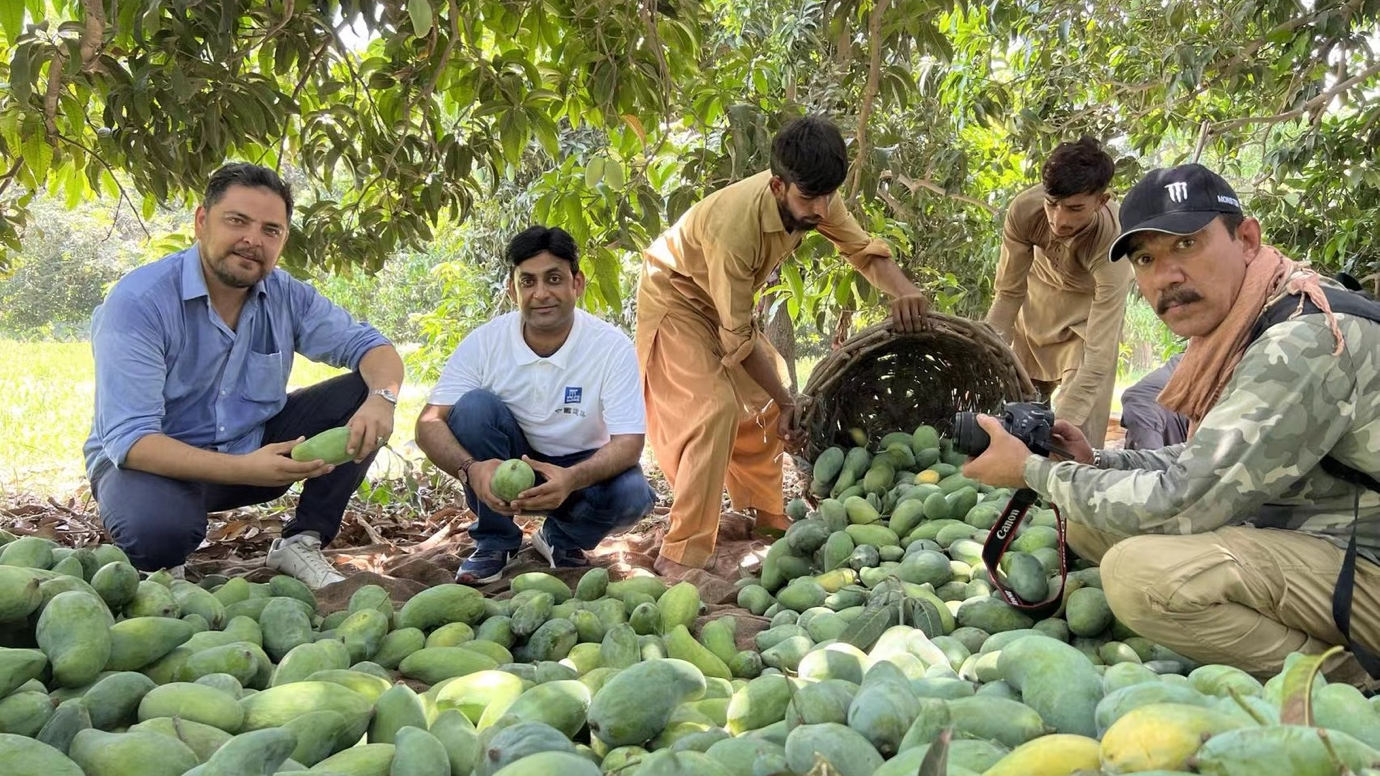 In Multan, after construction of this PKM motorway, the travel duration was shortened, now local villagers can transport mangoes from their villages to big cities. /CGTN

In Multan, after construction of this PKM motorway, the travel duration was shortened, now local villagers can transport mangoes from their villages to big cities. /CGTN

Qaisar not only personally participated in the construction of the largest transportation infrastructure project under the China-Pakistan Economic Corridor, the PKM motorway project, but also became a real beneficiary of it.

In Qaisar's hometown, he and his family own more than 150 acres of mango orchards, which are the most important local cash crops and the basis for the survival of hundreds of thousands of fruit farmers.

When it comes to harvest season, fruit farmers would use trucks to transport mangoes to Karachi, a southern port city 900 kilometers away, for sale. Before the construction of the PKM motorway, mangoes could not be shipped out in large scale when they were ripe, and the farmers could only watch it rot in the ground.

But Qaisar said after construction of this PKM motorway, the travel duration was shortened, now they can transport mangoes from their villages to big cities, that has increased the income as well as created happiness among the local villagers. 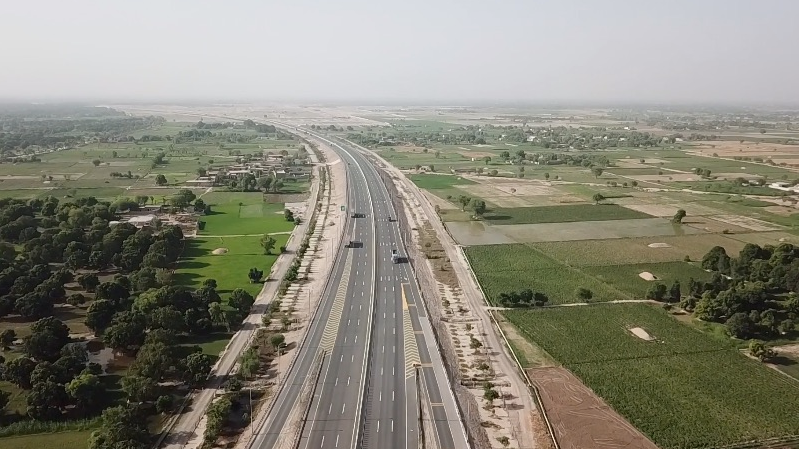 The Peshawar-Karachi Motorway which is built by China State Construction, is the main artery of transportation between Pakistan's north and south. /CGTN

The Peshawar-Karachi Motorway which is built by China State Construction, is the main artery of transportation between Pakistan's north and south. /CGTN

As we drive into the horizon, we notice patches of green alongside the arid, barren landscape. More than 300,000 trees are planted along the motorway. Along this route, new wells and canals show social responsibility of Chinese enterprises along the Belt and Road.

Travelling further south on the PKM motorway, I reach Thar.

Because other than transport infrastructure, the China-Pakistan Economic Corridor will also provide Pakistan with much needed energy infrastructure.

I had last come to the Thar Desert in 2018, when the digging was at full swing, but it was only 70 meters back then.

But after three years of laborious digging in the desert, the Thar coal mine project in southeast Pakistan is now under full operational testing.

Many believe the project could change Thar into Pakistan's electricity hub in the future.

Wang Qingzhu, the site general manager for China Machinery Engineering Corporation, told me that the Thar coal mine project is a key project of the Belt and Road Initiative and one of the most important CPEC projects. Wang said this project will reduce and relieve some pressure of the energy shortage in Pakistan, especially because more than 95 percent of Pakistan's coal energy is in the Thar Desert. 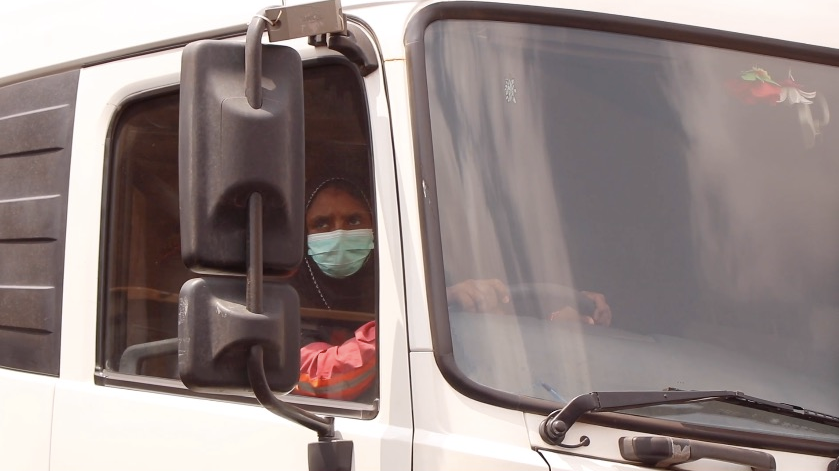 Singhari, 42, signed up to become a dump truck driver at the coal mines. /CGTN

Singhari, 42, signed up to become a dump truck driver at the coal mines. /CGTN

The discovery of a large coal reserve in Southern Pakistan is also changing the way families have lived for generations.

Singhari, 42, broke the cultural norms of her otherwise conservative Hindu community. She signed up to become a dump truck driver at the coal mines.

For many of these women, getting a job as a truck driver or engineer is not just a source of income, it is empowerment.

"The company has given us everything, they gave me work, they gave me respect, they gave me this uniform, and I feel that our working environment is better than the village life. There is no fear, I work and I'm happy," Singhari said.

Now earning a good salary, she has built her own house in the nearby town. Singhari wants to be an inspiration for the women of her community.

I left Thar with a heart filled with joy, thinking about Singhari who hopes the next generation of Thar can change their destiny and make their life better through hard work and perseverance.

Traveling further south, I reached Gwadar – a port that has a very superior geographical location.

But many years ago it was a small dock. There was no business activity, and was just like a small village, without too many people, without vehicles, it seemed to be forgotten by modern society in the 21st century.

Since the signing of CPEC projects, I have been traveling to Gwadar frequently since 2015, and over the years, I have seen the small fishing town transform into an international city, which is already experiencing a storm of construction. 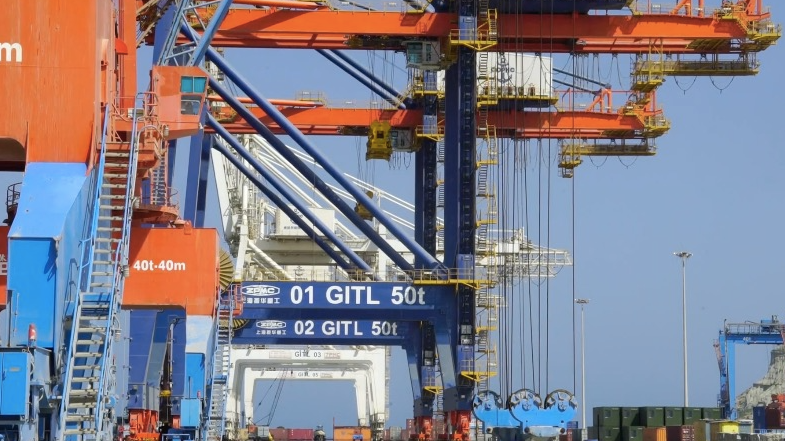 Gwadar port is the nucleus of the multi-billion-dollar project and is dubbed to become the hub of regional trade. /CGTN

Gwadar port is the nucleus of the multi-billion-dollar project and is dubbed to become the hub of regional trade. /CGTN

This time I met the administrative manager of the China Overseas Port Holding Company, Mr. Zou Yaodong, who told me that "Gwadar free zone has 923 acres along Gwadar coast and the business covers industrial manufacturing, agricultural food processing and law, insurance and other service business. And Gwadar free zone has already become a locomotive of local economic development."

Besides a brand-new container port, new hotels, 1,800 miles of superhighway and high-speed railway connect it to China's western provinces.

With rapid development on the ground in Gwadar, the life of locals is slowly turning towards progress and prosperity.

Naeem Ahmad, 47, who belongs to the local fisherfolk community, is a driver at the China Overseas Port Holding Company.

Naeem said the arrival of the China-Pakistan Economic corridor has brought new hope to the people.

"When the first agreement was signed between China and Pakistan, the local fisherfolk community was very fearful about the whole affair, they thought that the sea would be closed for them, and their livelihood would be badly affected, but when the Chinese company came to Gwadar and started working, we were happy because many people from Gwadar got jobs and this improved our livelihood."

A state-of-the-art school, vocational training institute, 50-bed hospital and recruitment of a considerable number of locals in ongoing development projects are the benefits being offered to the people of Gwadar.

I have traveled over 7,000 kilometers through Pakistan. From north to south, from snow-capped mountains, through the parched deserts to the pristine coast. Everywhere along the way, there's a visible and undeniable presence of a country miles away yet still able to enrich the lives of those even the most remote towns of Pakistan.

China and Pakistan have been "Iron brothers" since 1950. That's a testament to the strength of a relationship that transcends the changes of our time.