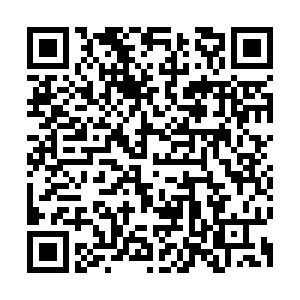 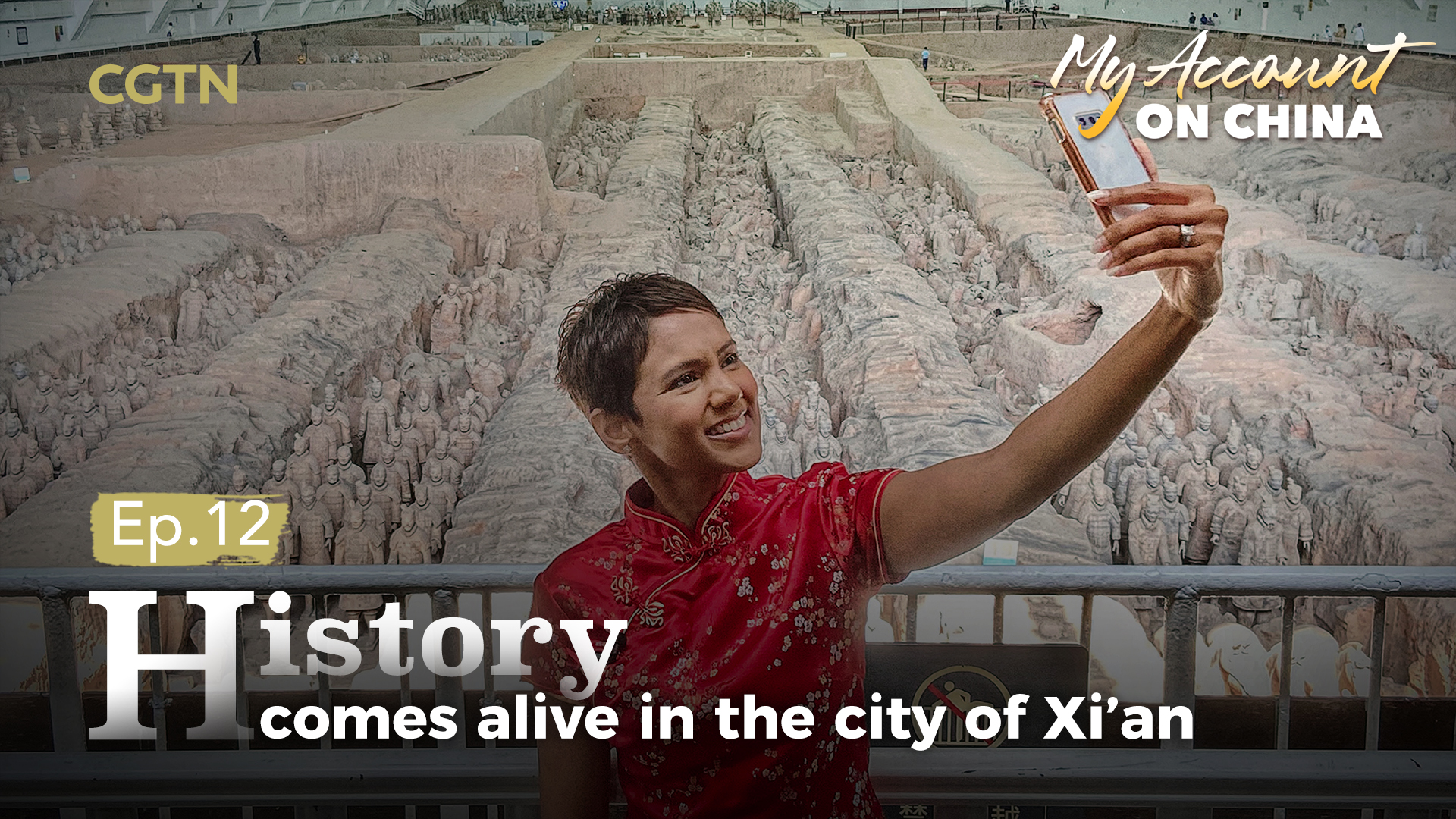 Northwest China's Xi'an is a city rich in history. It's the capital of 13 Chinese dynasties and the east end of the ancient Silk Road. I took a journey of discovery to the 3,000-year-old city to explore the stories behind its famous cultural heritages.

There was no doubt that I had to stop by the Eighth Wonder of the World! 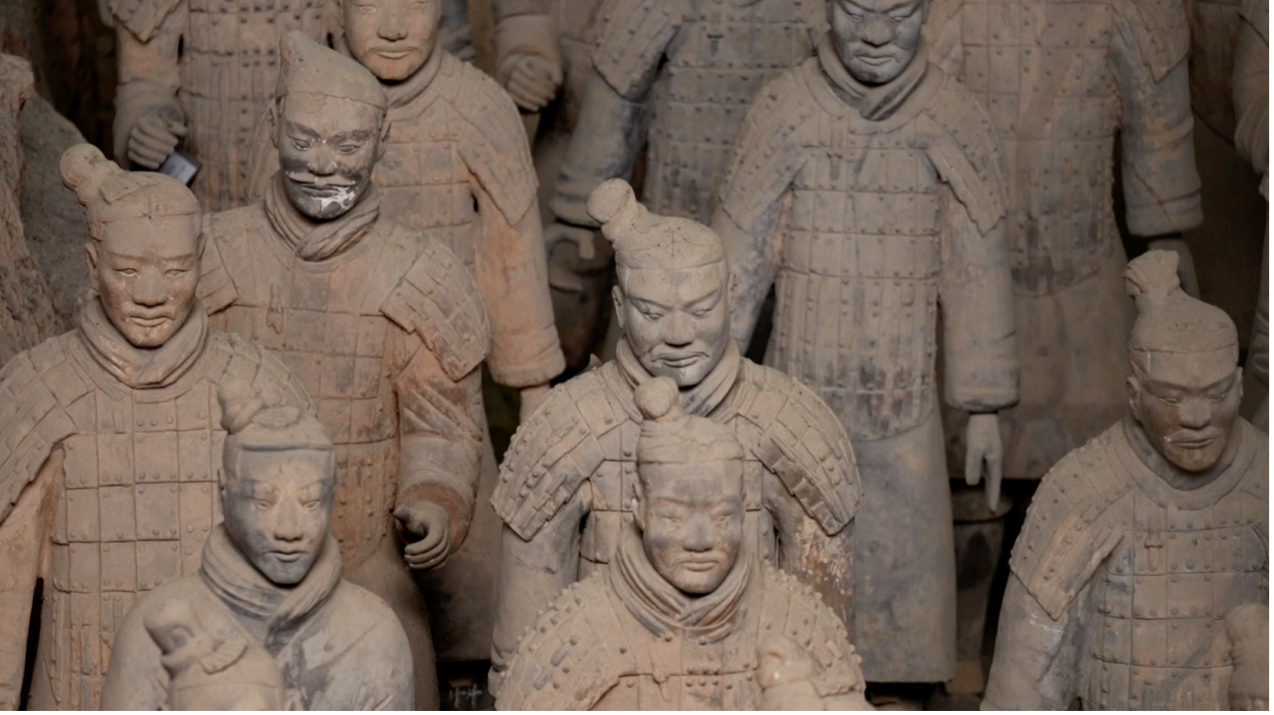 The Terracotta Army, a UNESCO world heritage, is a masterpiece of Chinese sculpture. It was discovered near the mausoleum of Qinshihuang, China's first emperor. It's one of the greatest archaeological findings in the 20th century. As Chinese President Xi Jinping rightfully said, "a visit to China will not be complete without seeing the Terracotta Warriors and Horses."

But restoring the statues has not been easy. Many were found in fragments when they were unearthed. Lan Desheng, a restorer of the Terracotta Army, invited me to a "field hospital" at the site where the statues are put back in place – piece by piece. 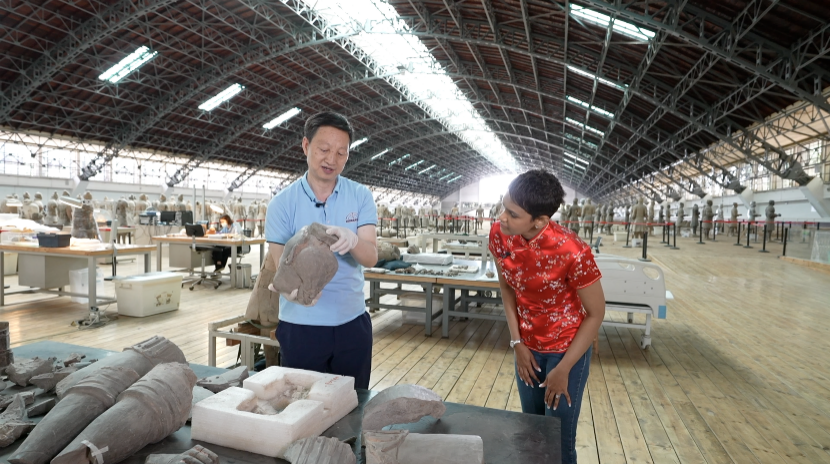 Lan Desheng shows me the head of a Terracotta Warrior, or what he calls "the center piece." /CGTN

Lan Desheng shows me the head of a Terracotta Warrior, or what he calls "the center piece." /CGTN

He told me each figure's fragments may range from 50 to 300 pieces. Restorers first take notes and photographs, then match the pieces and stick them together. A painstaking effort, but a rewarding experience for the restorers.

Restoration of each figure could take months, even years. Nearly 2,000 statues have been restored since 1974. I was impressed by their strong commitment to the job. Lan said he hopes to learn from the past and tell the story behind the Terracotta Army through restoration and pass on this world cultural heritage.

Certainly, I had to agree with Lan. Historic preservation is so important, as it helps tell the stories to the younger generation. And a good way to showcase artifacts is a museum.

And what better place to see a fascinating collection of 130,000 relics – the Xi'an Museum! Each relic tells its own story from dynasties including Qin, Han and Tang. President Xi said a museum is a big school during his visit here in 2015. He believes museums are instrumental in showing the world about past civilizations. 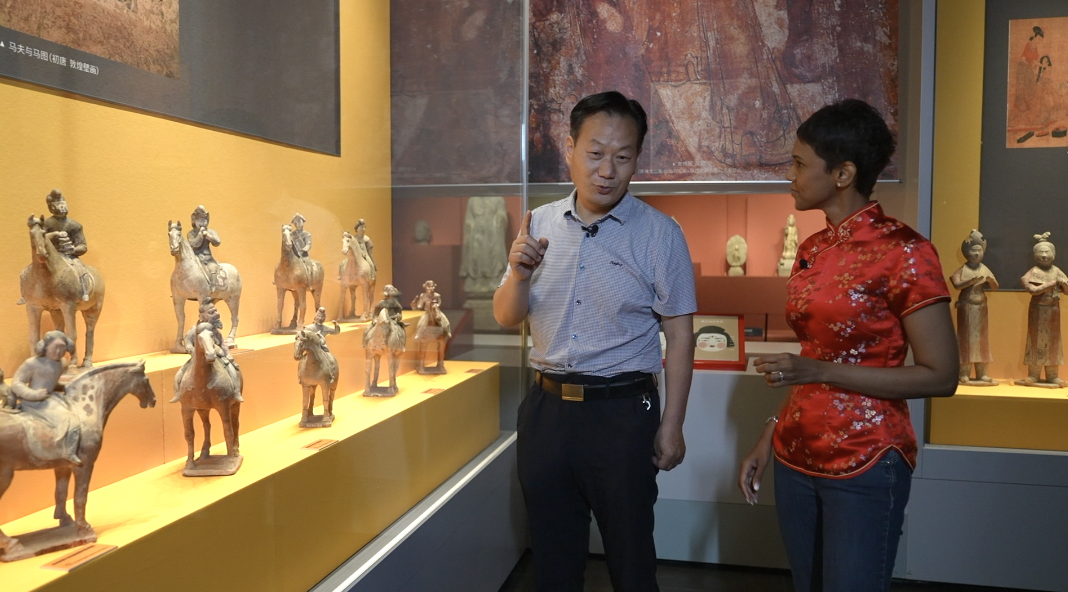 Wang Fengjun, deputy curator of Xi'an Museum, explains the history behind a set of pottery horses and riders. /CGTN

Wang Fengjun, deputy curator of Xi'an Museum, explains the history behind a set of pottery horses and riders. /CGTN

In line with the president's message, the museum now focuses more on promoting the relics. It works with schools to arrange field trips for students. Exhibitions are also held to encourage interaction with tourists.

Xi also says priority should always be given to the protection of historical and cultural heritages to benefit not only this generation, but many more to come. 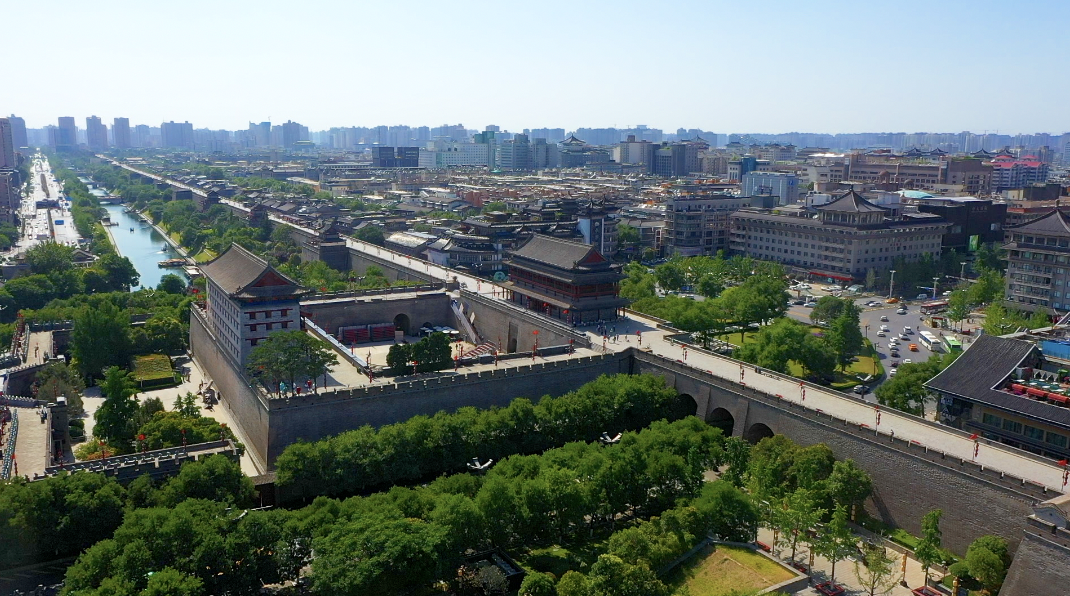 An aerial shot of the ancient city wall of Xi'an. /CGTN

An aerial shot of the ancient city wall of Xi'an. /CGTN

The Xi'an Ancient City Wall is a perfect example. Built during the Ming Dynasty about 600 years ago, it's the best-preserved city wall in China. It's an extension of the prior structure and was used as a defense system to protect the city. The wall is now a popular tourist attraction among locals.

The wall's management committee told me they monitor the conditions of the wall regularly and take preventive measures to clean up potential hazards. This is to prevent big maintenance work in the future, while keeping the relics' original charm and making them last longer.

The wall has seen the rise and fall of dynasties, yet it still stands thanks to Xi'an's protection efforts. Here, people can see that relics are not just lifeless objects, but living history. They can see the history and experience the culture up close.

Locals told me they love to walk along the wall, as they can get a spectacular view of the city. I couldn't agree more. It was like ancient and modern civilizations merging together at this wall. 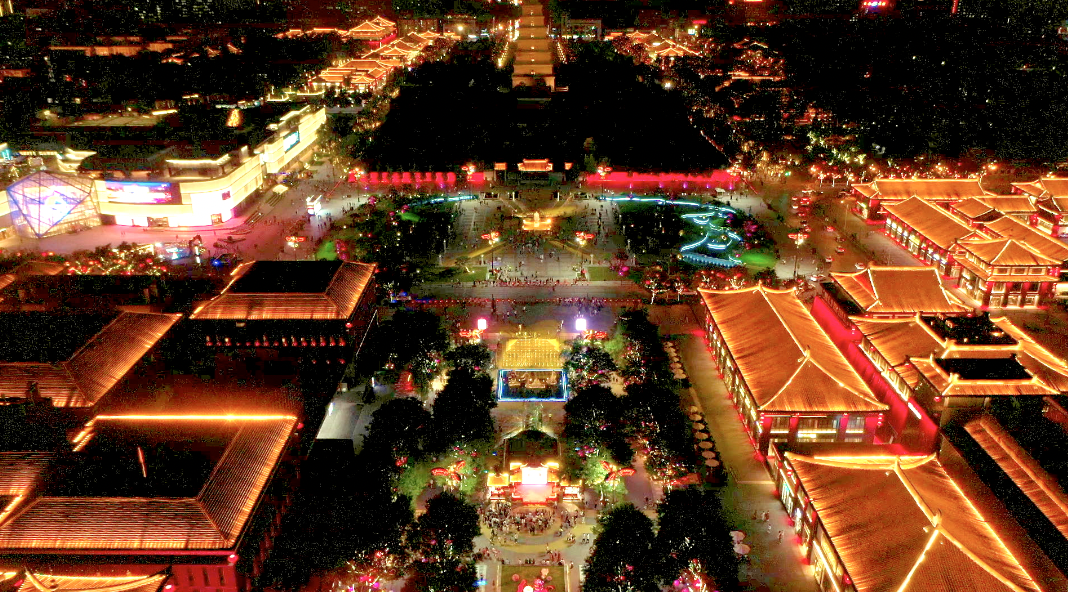 At this point, I thought I had seen everything at Xi'an. But the ancient capital just blew me away. The houses along Datang Everbright City resemble the Tang buildings a thousand years ago. It's a golden age of arts and literature in Chinese history.

I found the courage to walk down the pedestrian street in my Hanfu attire. I was glad that I wasn't alone. I found new friends or as I was told, "tongpao." I was happy to see young people wearing their traditional clothes and taking pride in their culture. 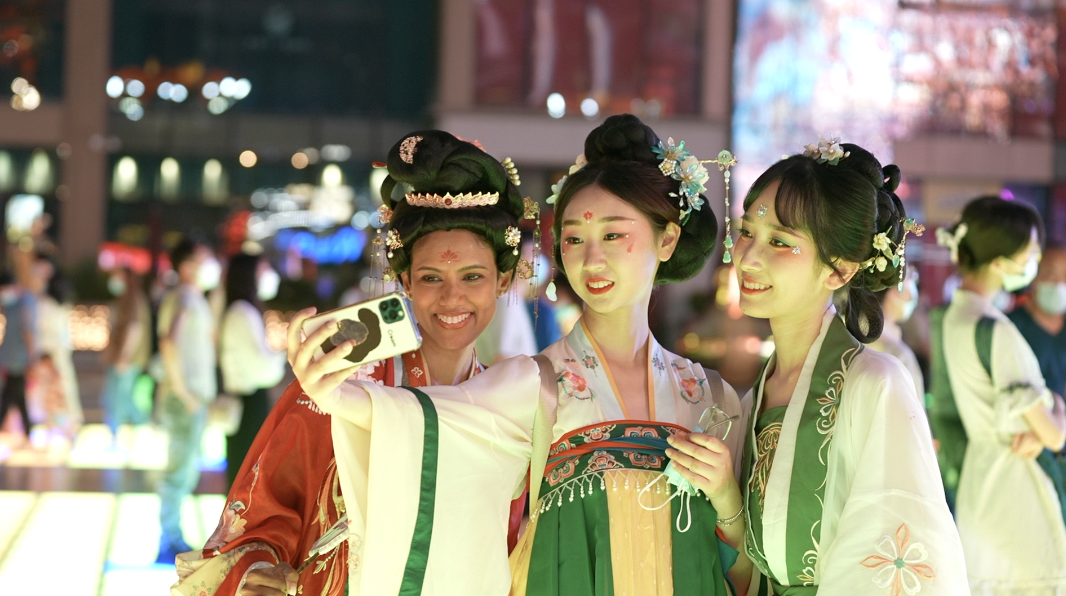 Many local brands are leveraging on this trend. They are jumping on the bandwagon to incorporate Chinese elements in their products, and create new, fashionable pieces. Today, this movement, "Guochao," is taking China by storm. Hanfu, for instance, has grown from a niche hobby to a billion-yuan industry in just a few years.

I had a wonderful time in the ancient capital of China. It was incredible to go back in time to relive the moment of the Tang Dynasty, to experience the rich Chinese culture in history, and to enjoy the beautiful night along Da Tang City. Xi'an is a city full of stories. This is where history comes alive.