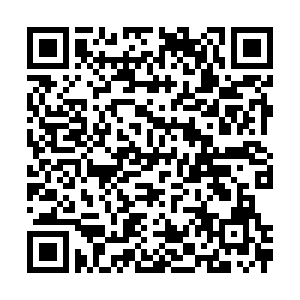 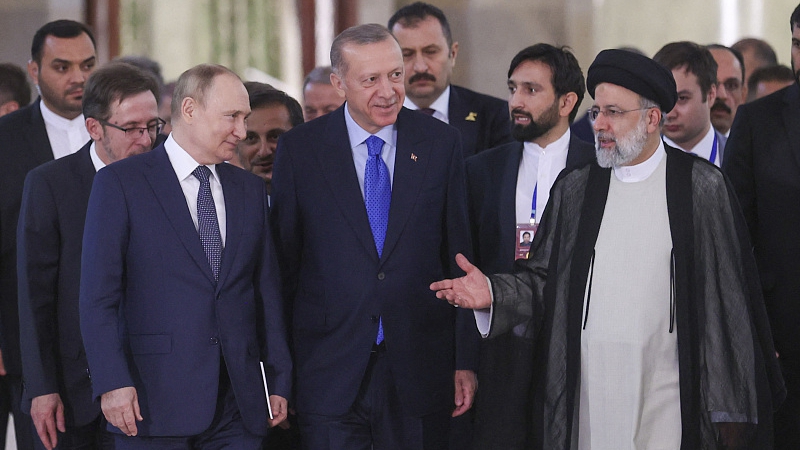 Editor's note: Nikola Mikovic is a freelance journalist based in Serbia. He covers mostly Russian, Ukrainian and Belarusian foreign policy issues. The article reflects the author's opinions, and not necessarily those of CGTN.

Türkiye did not seem to get the green light from Russia and Iran to launch a "special military operation" in northern Syria, though the Kremlin got strong verbal support from Tehran for its actions in Ukraine. While Türkiye aims to achieve its strategic goals in Syria, Moscow and Iran are seeking to strengthen bilateral relations and preserve the status quo in Syria.

In an attempt to reach a deal over Syria, the presidents of Iran, Russia and Türkiye held a trilateral summit on July 19 in the Iranian capital. But instead of an agreement on Syria, they made energy deals.

Iran's National Oil Company has announced a $40 billion strategic cooperation agreement with Russia's Gazprom, while Iran and Türkiye have agreed to start negotiations on a new gas export deal that will allow increased supply of natural gas from Iran to Türkiye for a period of 25 years, starting in 2026. In other words, quite aware of their fundamentally different interests in Syria, the leaders of Iran, Russia and Türkiye seem to have decided to focus on developing economic ties.

According to Kremlin spokesperson Dmitry Peskov, Russia and Iran plan to gradually abandon using the American dollar in bilateral trade. Although the trade between the two nations grew by 81.7 percent and reached $4.03 billion in 2021, when it comes to the economy, especially energy, they are competitors rather than partners. Now that Russia has significantly reduced gas and oil supplies to Europe and focused on Asia – which is Iran's primary market – Tehran may get strong competition in the field of energy exports.

Still, the meeting between Russian President Vladimir Putin and his Iranian counterpart Ebrahim Raisi has symbolic significance. It was Putin's first trip outside since launching the "special military operation" in Ukraine on February 24. With the Tehran summit, the two countries showed that despite Western sanctions, they are not isolated in the global arena.

Also, reports suggest Iran's Supreme Leader Ayatollah Ali Khamenei has de facto supported Moscow's actions in Ukraine. "NATO would have started a war with Russia under the pretext of Crimea if it had not been stopped in Ukraine," Khamenei told Putin. 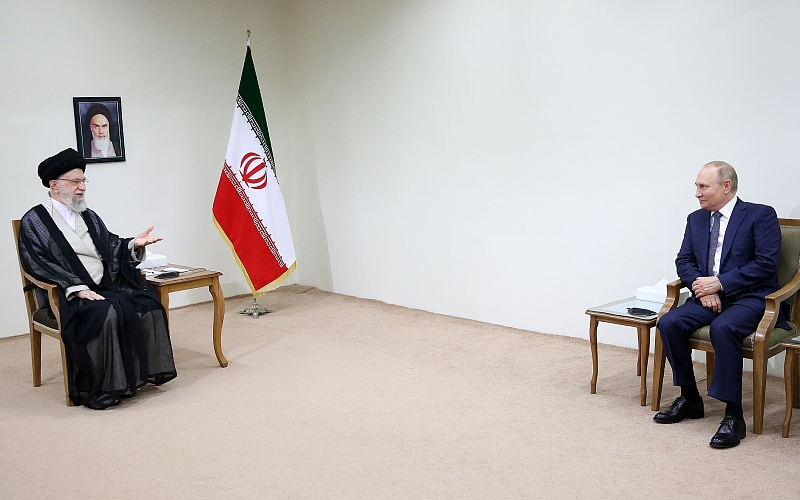 U.S. National Security Adviser Jake Sullivan recently accused Russia of trying to buy unmanned aerial vehicles (UAVs) from Iran, and U.S. State Department spokesperson Ned Price said if Iran hands over the drones to Russia, "it will entail a series of sanctions from the United States and other countries."

But although Iran has learned to live with Western sanctions, it is unlikely to rush to deepen its security ties with Russia. Instead, it will rather focus on the economic aspect of cooperation. Yuri Ushakov, Putin's foreign policy adviser, claims that the Russian and Iranian presidents did not discuss the issue. Thus, Iran's verbal support for Russia does not necessarily mean that Tehran will risk additional deterioration in its relations with the West and sell UAVs to Moscow.

In the West, Iran and Russia are often portrayed as "allies" in an anti-American coalition. In reality, the two countries enjoy good relations, but they are not even strategic partners, let alone military and political allies. In Syria, however, they both firmly back President Bashar Al Assad. The Tehran summit has shown that Türkiye is unlikely to have their blessing for another military adventure in Syria.

"Any military strike on Syria will harm the region and will benefit terrorists," Khamenei said after the meeting with Turkish President Recep Tayyip Erdogan.

This indicates that Iran does not support Turkish plans to establish a 30-kilometer-deep "security zone" in northern Syria – a region that is under the control of the Kurd-dominated People's Defense Units (YPG), and where Russia has a significant military presence. The Kremlin, on its part, "hopes that Ankara will not launch a new military operation in Syria." Türkiye, on the other hand, expects Russia and Iran to back the "fight on terror" in Syria, while Putin insists that the three countries must put an end to terrorists in Syria forever. But who are the terrorists?

As usual, the devil is in the details. For Ankara, the YPG is an extension of the Kurdistan Workers' Party that is outlawed in Türkiye, which is why it sees the group as a terrorist organization. For Moscow and Tehran, the terrorists are Türkiye-backed forces in Syria's Idlib province. Therefore, given that the three countries have diametrically opposed views on the situation in the West Asian nation, it is not very probable that they will reach a deal on Syria any time soon.

Still, despite differences, the three leaders will undoubtedly continue to hold summits on Syria, and seek to avoid potential tensions in their relations at such turbulent times.