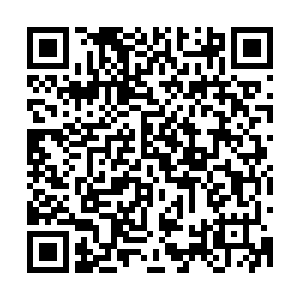 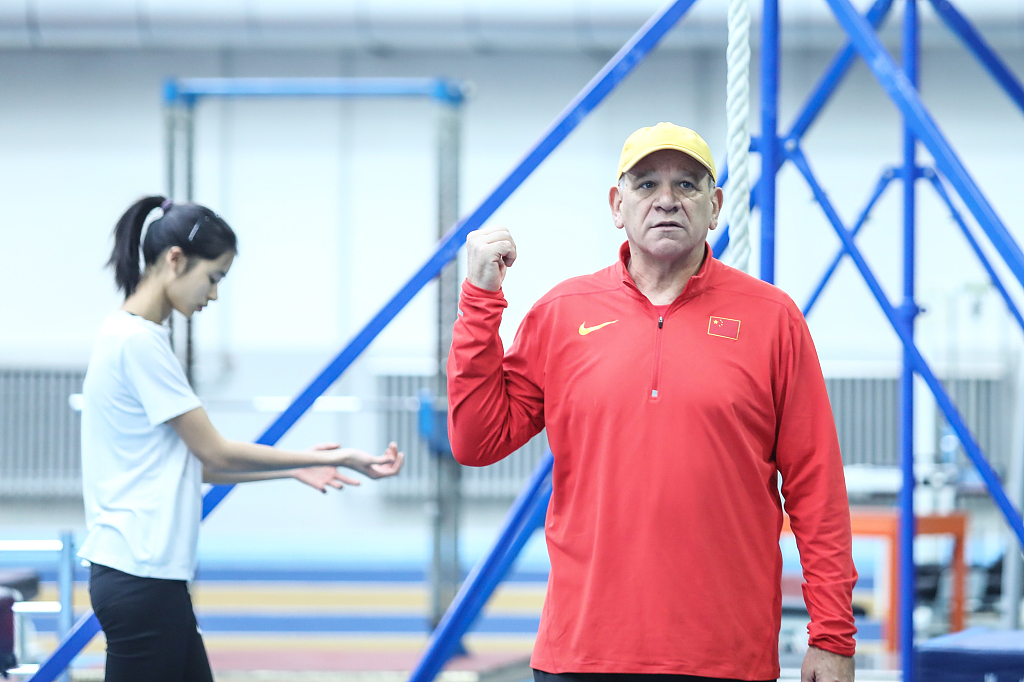 Randy Huntington, who has been a head coach with the Chinese Athletic Association for over eight years, ranks Wang Jianan as the third-best athlete he has trained after Wang won the men's long jump gold medal at the World Athletics Championships in Eugene, Oregon, last week.

In an interview with Xinhua News Agency, Huntington, 68, put Americans Mike Powell and Willie Banks, in that order, above Wang.

Powell set the men's long jump world record of 8.95 meters in 1991, and no one has ever been able to beat that performance. Banks was the first athlete to surpass 18 meters in the men's triple jump (18.20 meters), albeit wind-assisted, in 1988.

When Wang finished his last leap in the competitions in Eugene, he raised both arms and ran onto the 100-meter track to celebrate. Huntington recalled that Powell did the same in celebration 31 years ago. 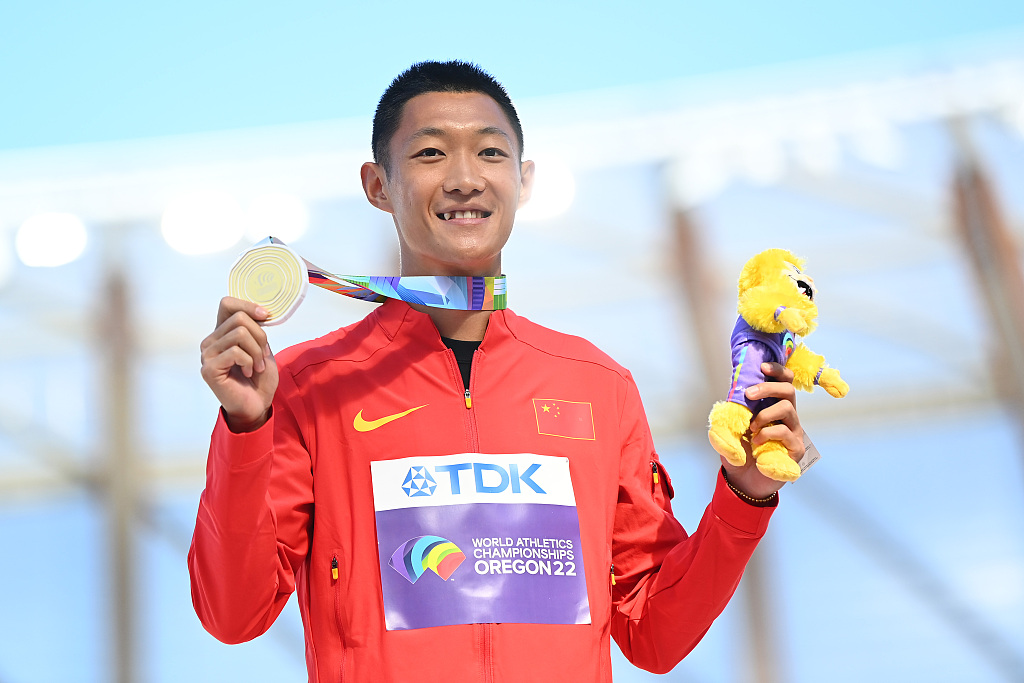 Wang Jianan of China poses with his men's long jump gold medal at an awards ceremony at the World Athletics Championships at Hayward Field in Eugene, Oregon, July 17, 2022. /CFP

Wang Jianan of China poses with his men's long jump gold medal at an awards ceremony at the World Athletics Championships at Hayward Field in Eugene, Oregon, July 17, 2022. /CFP

Wang is the first athlete to win the gold in both the World Championships and the World U20 Championships. There was an eight-year gap between the two memorable moments, but he secured the honor at the same stadium in Eugene.

Wang revealed that Huntington told him before the match: This was home for both of them – Huntington studied at University of Oregon between 1978 and 1982. Huntington confirmed the story and recalled telling Wang that nobody could defeat him in their home.

Huntington was not surprised at all at Wang's victory. He told Xinhua that Wang could have reached 8.40 or 8.50 meters if the World Championships had been held on schedule in 2021. He told Wang after the preliminary match that he would win the gold because he knew the athlete was the most fancied of Team China to do so. 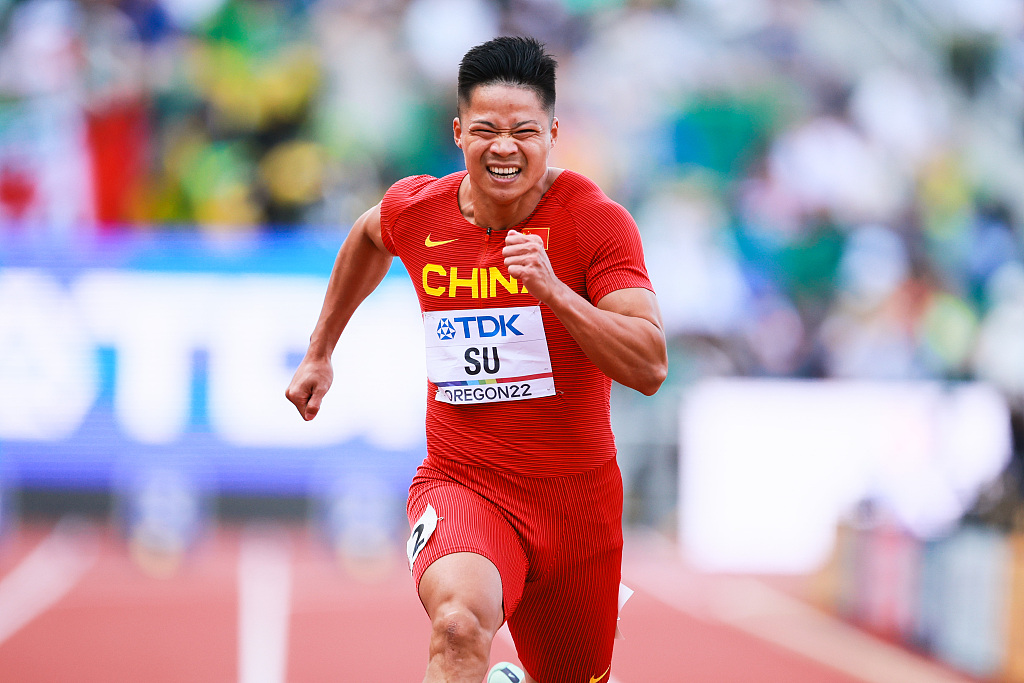 Su Bingtian of China competes in the men's 100 meters at the World Athletics Championships in Eugene, Oregon, July 16, 2022. /CFP

Su Bingtian of China competes in the men's 100 meters at the World Athletics Championships in Eugene, Oregon, July 16, 2022. /CFP

Wang is not the only top-performing Chinese athlete of Huntington's. So is sprinter Su Bingtian who set his personal best record of 9.83 seconds in the men's 100-meter event at the Tokyo Olympics.

Huntington believes Su's performance could match Wang's gold medal and may be better in the pure sense of performance. Though Su didn't repeat his success at the World Championships and Huntington had ceased to coach him, the American promised Su to help him anytime if necessary.

Huntington knew Su hadn't competed in any formal race before Eugene and that's why he didn't perform well enough this time. However, despite Su's 33-year-old age, Huntington is confident that he can finish the 100 meters within 9.80 seconds.

Su already has the top cadence in the world and he plans to enhance his strides in two years, according to Huntington. If Su meets his goal, the coach thinks he can even reach 9.75 seconds.

Huntington said he had seen a lot of promising sprinters in China, but many of them lacked the scientific way of training to do better. Athletes must change their way of training after reaching 18 or 19, according to him. They might have been able to reach 10.40 or even 10.30 seconds as children, but adults need new ways to speed up to 10.10 or 10 seconds. 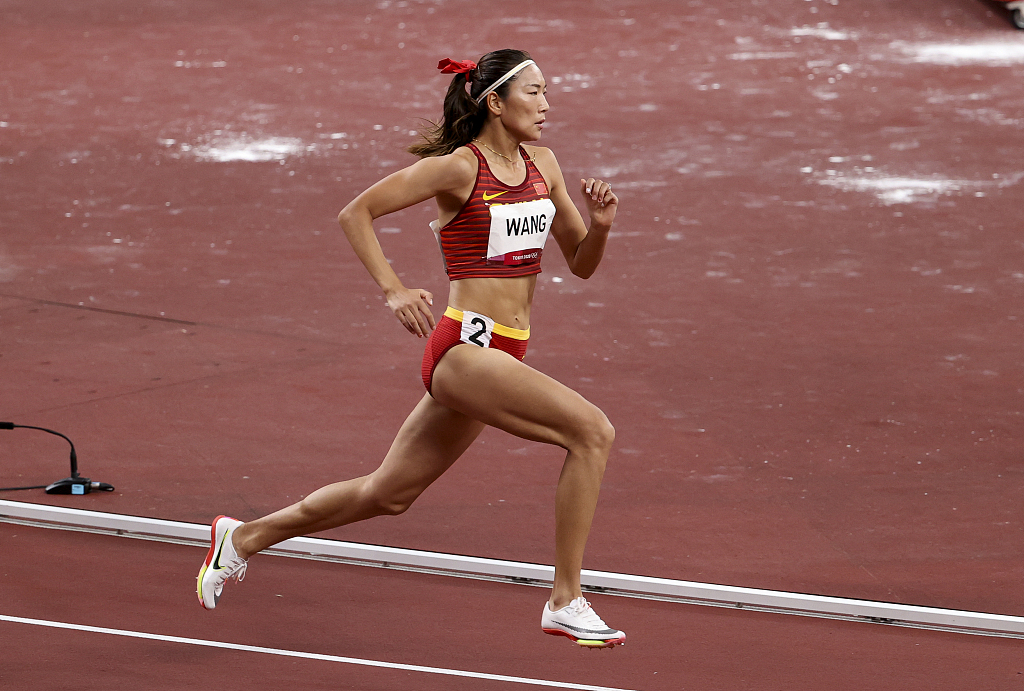 Wang Chunyu of China competes in the women's 800 meters at the Tokyo Olympics at the Olympic Stadium in Tokyo, Japan, August 3, 2021. /CFP

Wang Chunyu of China competes in the women's 800 meters at the Tokyo Olympics at the Olympic Stadium in Tokyo, Japan, August 3, 2021. /CFP

Huntington told Xinhua that getting Chinese coaches to accept modern scientific training systems is not about encouraging them to travel to the U.S. for lectures, but having them secure solid and proven knowledge.

The coach looks at Su and Wang as the best hope to develop a new generation of athletes after they retire and become coaches. Meanwhile, he admitted he will retire soon after living and working for nine years in China. After retirement, he will return to the U.S. and take care of his mother.

He is willing to offer advice to Chinese athletes remotely in the future. Huntington's most important task now is to help Wang Chunyu prepare for the women's 800 meters at the Paris Olympics in 2024.

Having worked as a coach for over 40 years, Huntington said he almost grew obsessed with helping athletes realize dreams they couldn't imagine themselves. He never married or had any children. He said he gave up everything for athletics.