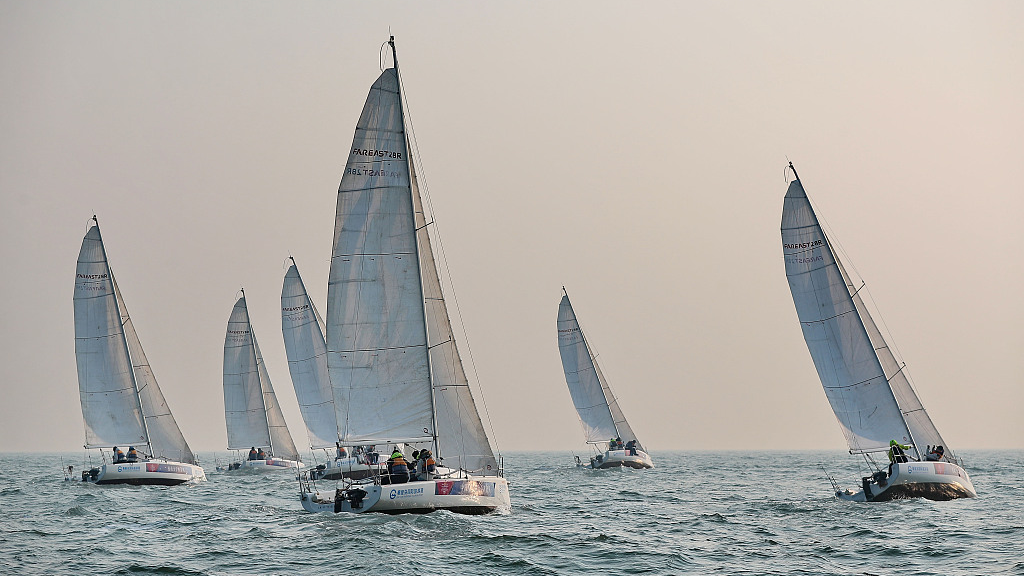 Sailing culture is growing among Chinese youth. In the coastal city of Qinhuangdao in north China's Hebei Province, a summer sailing camp, for the last 15 years, has been helping Chinese youth to get familiar with sailing.

In the southwest of Qinhuangdao is Beidaihe, where the sailing club operates. You can see dozens of dinghies are preparing to launch and steering the sails of these dinghies are kids and teenagers who are learning the basics of sailing.

These sailors are aged seven to 16. Some of them are already experienced. Over the course of the seven days, they will spend four hours at sea each day, learning skills from setting up the sail to reading winds and sailing in different wind conditions.

Isabella Yin, a senior student in the sailing camp, who came here with two of her friends said to CGTN.

"I really like sailing, I started in the summer of fifth grade, like two years ago. I first got into it because I want to go to a summer camp with my friends, and then I found out this is a very interesting sport that need you skill and concentration and a lot of technique staff so I really liked it since then," she said.

The Beijing Sailing Club in Qinhuangdao has been running this event for over 15 years. The club says the 180 students in this week's camp are among the 1,138 young people enrolled in summer sailing courses this year. That's a huge jump in students compared to 2012, when they only had 56 children who signed up.

"We have two main parts of the sailing camp. One is sailing. What we use is RYA (Royal Yachting Association) sailing scheme, which is an internationally recognized sailing scheme for youth to learn sailing. There are different stages within the scheme, the kids will challenge themselves throughout the course, not just learning the hands-on sailing skills but also learning about the weather, how to tell the current, the wind. Another part is that we have this professional counselor team that creates various activities to make a fun and interesting camp environment for the kids." said Wang Yitan, brand manager of the Beijing Sailing Center.

Despite the surge in the number of young sailors, the Beijing Sailing Club believes there's still room for the sport to grow. Its president, Li Xiaohuan is optimistic they can have a million young sailors by 2032 and the club is working with other like-minded groups to achieve this goal.

"The sport of sailing in China has a lot of room for development. With our methods and successful experience in operation, we have assisted the China Yachting Association in establishing a youth training system, a coach development program and training in basic operations. I think it's possible to expand the youth sailing population to one million within ten years." said Li Xiaohuan, president of Beijing Sailing Center.

Qinhuangdao's long coastline has made it an ideal hub for sailing. It's also the training base of China's National Sailing Team, which has won its share of medals including gold from the Beijing, London, and Tokyo Summer Olympics. In June, the Chinese Yachting Association set up its northern headquarters here.

"A few years ago, we planned to make Qinhuangdao the core area for sailing and windsurfing, mainly based on several considerations. One is high-quality natural resources, such as coastline of more than 100 kilometers. The other is access to a bigger market, such as cities with large populations like Beijing and Tianjin," said Liu Weidong, secretary-general of Chinese Yachting Association.

Sailing is still regarded as an elite sport in China. But Liu believes that by making the sport more accessible to China's growing middle class, young people will become sailing's key target market in 10 to 15 years.