Download
Who benefits from the Black Sea Initiative?
Nikola Mikovic 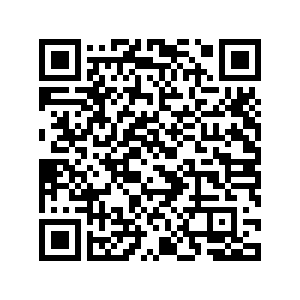 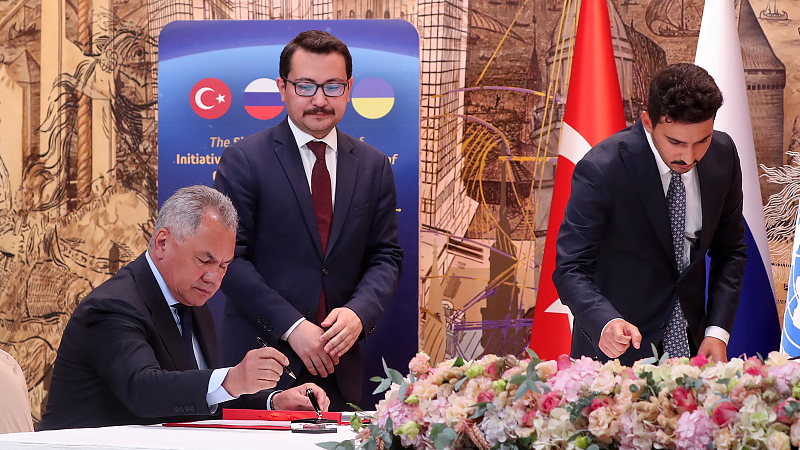 Russian Defence Minister Sergei Shoigu attends a signature ceremony of an initiative on the safe transportation of grain and foodstuffs from Ukrainian ports, Istanbul, July 22, 2022. /CFP

Russian Defence Minister Sergei Shoigu attends a signature ceremony of an initiative on the safe transportation of grain and foodstuffs from Ukrainian ports, Istanbul, July 22, 2022. /CFP

Editor's note: Nikola Mikovic is a freelance journalist based in Serbia. He covers mostly Russian, Ukrainian and Belarusian foreign policy issues. The article reflects the author's opinions, and not necessarily those of CGTN.

The United Nations-backed "historic" deal signed between Russia and Ukraine, would allow the export of millions of tons of grain from the Ukrainian Black Sea ports, could pave the way for a future ceasefire agreement between Moscow and Kyiv. But if things go wrong, the Black Sea Grain Agreement, also known as the Black Sea Initiative, signed in Istanbul on July 22, could lead to a further escalations.

Weeks before Russian and Ukrainian representatives arrived in Türkiye to sign the deal, it became apparent that Moscow was ready to participate in the unblocking of the Black Sea. Russian withdrawal from Snake Island on June 30 was a clear indication that the Kremlin does not aim to establish control over Ukraine's Odesa port any time soon, if at all.  On July 11, Turkish President Recep Tayyip Erdogan told his Russian counterpart Vladimir Putin that "it was time to act on a United Nations plan to set up a sea corridor for Ukrainian grain exports through the Black Sea." Now that the deal is signed, Türkiye will boost its role as a mediator over the Russo-Ukrainian conflict. But will Moscow and Kyiv benefit from the Black Sea Grain Agreement?

The deal will allow Ukraine to start exporting its wheat via the Black Sea ports of Odesa, Chernomorsk and Yuzhny, and earn around $10 billion from grain sales. The Ukrainian economy can recover to a certain extent, which means the West can reduce the amount of money it is sending to Kyiv. That is why Washington welcomed the Black Sea Initiative, saying, "the devil's in the details."

Indeed, according to the document, "the parties will not launch any attacks on merchant ships and other civil ships and port facilities involved in this Initiative." The deal also states that "all activities in Ukrainian territorial waters are under the jurisdiction and responsibility of Ukraine." But what if Ukraine launches attacks on the Russian forces in Kherson – a port city that is presently under Russia's control – from Odesa? If Russia responds and strikes Odesa, the West will interpret it as a violation of the Black Sea Grain Agreement, and will impose new sanctions on Moscow. 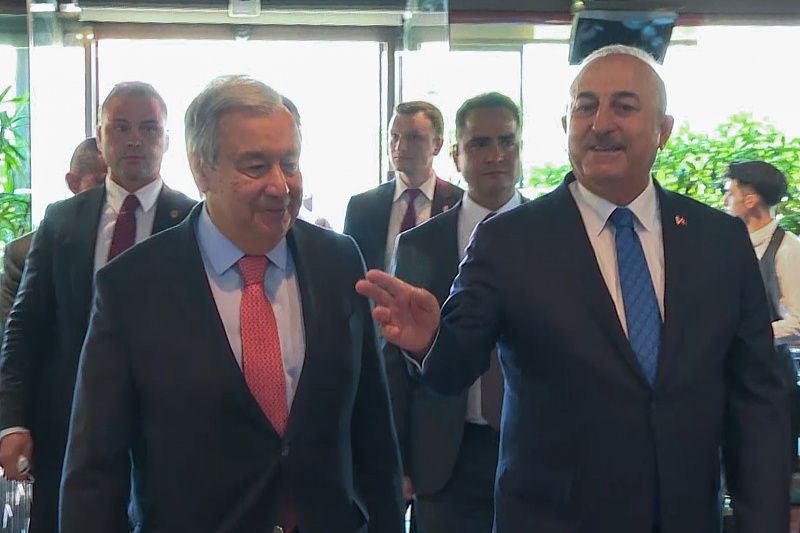 United Nations Secretary General Antonio Guterres and Turkey's Foreign Minister Mevlut Cavusoglu talk before a meeting to discuss a deal between Ukraine, Russia, Türkiye and the UN to resume exports of grain from Ukraine through the Black Sea, Istanbul, July 22, 2022. /CFP

United Nations Secretary General Antonio Guterres and Turkey's Foreign Minister Mevlut Cavusoglu talk before a meeting to discuss a deal between Ukraine, Russia, Türkiye and the UN to resume exports of grain from Ukraine through the Black Sea, Istanbul, July 22, 2022. /CFP

Moreover, it is doubtful if Russia can control the Ukrainian ships on their way back to Odesa, Chernomorsk and Yuzhny. It will be Türkiye that will play the role of major inspector, but there is no guarantee that the NATO member can turn a blind eye and allow weapons smuggling to Ukraine. Thus, the agreement could help Ukraine get more weapons, this time via the Black Sea.

On the other hand, according to the UN Secretary-General Antonio Guterres, the deal will "help avoid a food shortage catastrophe for millions worldwide." From a humanitarian aspect, the Black Sea Initiative could help vulnerable countries that are heavily important of the grain import from Ukraine and Russia. Politically, however, the deal means that the Kremlin has made yet another concession to the West by de facto giving up its plans to – as the Russian General Rustam Minnekaev emphasized in April – to create a land corridor to Moldova's breakaway region of Transnistria. In other words, the Odesa region, as well as a significant portion of the Black Sea coast, will remain in Ukraine’s hands for the foreseeable future.

Nonetheless, Russia has gotten certain concessions from the West in return. Moscow and the UN have signed the Memorandum of Understanding on exports of agricultural products, which means that Russia can sell its food and fertilizers abroad for the next three years. Additionally, NATO member Lithuania has reportedly lifted a ban on the rain transit to Russia's semi-exclave of Kaliningrad on the Baltic Sea. More importantly, Washington has announced that it does not plan to supply Kyiv with ATACMS surface-to-surface missile, with a range of 300 kilometers. Thus, it is entirely possible that the Black Sea Grain Agreement is part of a wider deal between the Kremlin and Washington.

The coming days and months will show if and how the Black Sea Initiative will be implemented. If both sides stick to the deal, it will represent a de facto local ceasefire in the Odesa region of Ukraine. As such, it could usher in a positive impact for Kyiv, as well as for countries that are dependent on their grain imports, but it could prevent Russia from achieving it strategic goals in the Eastern European country.