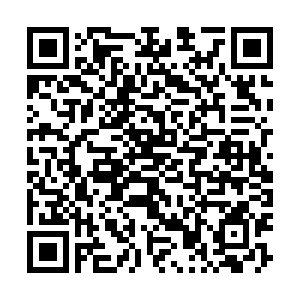 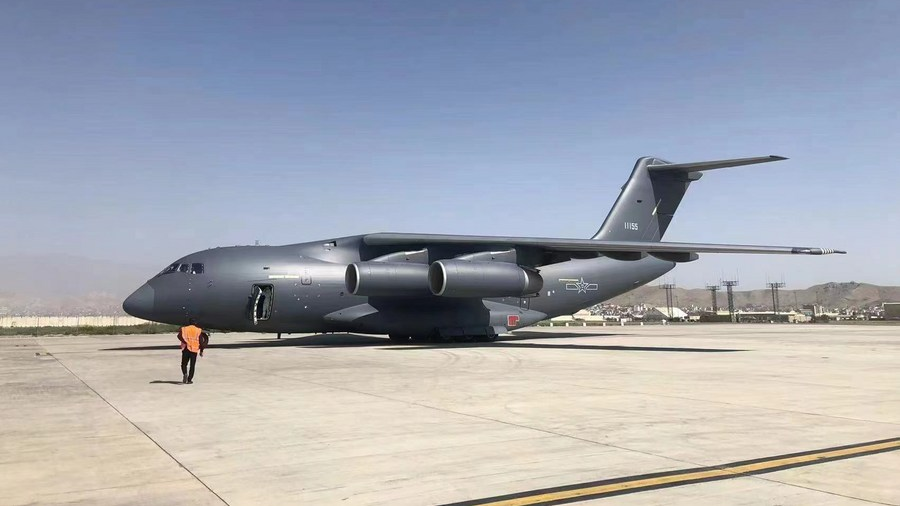 A Y-20 large transport aircraft carrying the second batch of earthquake relief supplies donated by the Chinese government arrives at Kabul International Airport in the capital of Afghanistan, June 28, 2022. /Xinhua

A Y-20 large transport aircraft carrying the second batch of earthquake relief supplies donated by the Chinese government arrives at Kabul International Airport in the capital of Afghanistan, June 28, 2022. /Xinhua

On August 16, 2021, a U.S. Air Force C-17 transporter was taxiing on the runway with throngs of people desperate to flee the country running along with it. Amid the chaos, some climbed on the fairing above the wheel. When the plane finally took off, video captured two people falling through the sky. The two victims of the incident, Zaki Anwari, a young football player, and Fada Mohammad, a dentist, didn't survive. They were found lying lifeless outside the Kabul International Airport. The U.S. left Afghanistan with tragedies.

On the morning of June 28, 2022, China's Y-20 cargo plane arrived at the same airport, carrying disaster relief supplies including tents, blankets, and folding beds for people hit by a deadly earthquake.

10 months apart, at the same airport, two different planes: one leaving with tragedies and one coming with hope.

Many compare the people falling off the military plane of the Kabul Airport with the falling man of the Twin Towers, both being incidents that left a dent on the two eventful decades in the history of Afghanistan. They also symbolize the brutalities of the conflicts. The rest is history in which the U.S. played a part: imposition of values on other countries, violation of human rights, and abuse of financial hegemony.

Forcing its own values on other countries without considering national realities will not bear any desirable fruits. In 2002, the U.S. launched the Middle East Partnership Initiative. Then President George W. Bush vowed to build Afghanistan as a role model of democracy and claimed to be a partner in pursuit of peace, prosperity, stability, and democracy. Two decades later, the U.S. walked back on its pledges as President Joe Biden said the mission of the U.S. in Afghanistan has never been nation-building. In fact, what the U.S. did over the decade was forcing its will on the sovereign country through the so-called tyranny of democracy. Afghanistan is a country with diverse ethnic communities. The U.S., arrogant about its own values, installed a presidential system in the traditionally tribal country against the will of the Afghans. It has been proved that a transplanted political system cannot ease the tension within the country. It only worked in the opposite way, tearing at the fragile social fabric. A report by the Office of the Special Inspector General for Afghanistan Reconstruction, an organization founded by the U.S. Congress, points out that "the U.S. government did not understand the Afghan context" and "lack of knowledge at the local level meant projects intended to mitigate conflict often exacerbated it". It was no surprise that the U.S. approach failed in the country.

American soldiers watch over Afghan refugees waiting in line to be processed for an exit flight out of Kabul, Afghanistan, August 25, 2021. /VCG

American soldiers watch over Afghan refugees waiting in line to be processed for an exit flight out of Kabul, Afghanistan, August 25, 2021. /VCG

Peter Michael McKinley, former U.S. ambassador to Afghanistan, once revealed that officials of the Afghan government were handpicked by the U.S., which undermined the legitimacy and independence of the Afghan government. In 2019, only two million out of the 32 million people in Afghanistan voted in the presidential election. As Tamim Ansary, an Afghan-American writer, said, Afghans have their own story and different powers that invade the country will never be the main character of the story.

Abuse of human rights in Afghanistan also explains why the U.S. didn't win the hearts and minds of the people. There were countless pains and tragedies over the past 20 years in Afghanistan. Airstrikes were the nightmare of many civilians and atrocities shocked the world. In 2002, in Oruzgan Province, an airstrike took dozens of lives and left hundreds wounded at a wedding ceremony. In 2010, in Kandahar, American soldiers killed an unarmed 15-year-old boy, Gul Mudin. One of the soldiers, Jeremy Morlock, took photos to celebrate, and Calvin Gibbs cut Mudin's finger and gave it to Andrew Holmes to "mark" his first kill of an Afghan. In 2012, online footage showed four U.S. Marines humiliating three bodies of Taliban members by peeing on them. In 2016, the U.S. Department of Defense released nearly 200 photos of prisoner abuse. Media believed it was only the tip of the iceberg.

The presence of the U.S. in Afghanistan did not bring the peace and prosperity it promised. It is estimated that the war in Afghanistan severely damaged the economy. The country has long been among the least developed countries and over half of the population live below the poverty line.

The story didn't end with the withdrawal of the U.S. forces from Afghanistan, as the U.S. leveraged financial hegemony to undermine the country's ability to rebuild itself. President Biden signed an executive order, freezing seven billion dollars belonging to Afghanistan's central bank, to "compensate the victims of the 9/11 attacks" for "the benefit of the Afghan people." Simply put, the U.S. took Afghans' savings in the U.S. and decided to spend it. An ensuing earthquake only worsened the problem. What Afghans need now is food, water, blankets and other humanitarian aid. International Rescue Committee, an organization headquartered in New York, called for the release of the seven billion dollars of the Afghan central bank. What the U.S. did also set a bad precedent of controlling overseas assets of another sovereign country with presidential executive orders of the U.S. No one is sure which country might be the next.

Over 12,000 cans of Afghan pine nuts that sold out in three hours in China stand as a good example of how to help a country in need in the right way, a sharp contrast with the fund backed by the frozen assets. Over the past 20 years, the C-17 and the Y-20 are only two of the countless planes that flew over the sky of the Kabul International Airport, but they are a small reflection that shows the bigger picture of Afghanistan's situation in the world. That should leave the U.S. some time to ponder its actions in Afghanistan and the rest of the world.