Download
U.S. CHIPS act: To compete with or to contain China?
CGTN 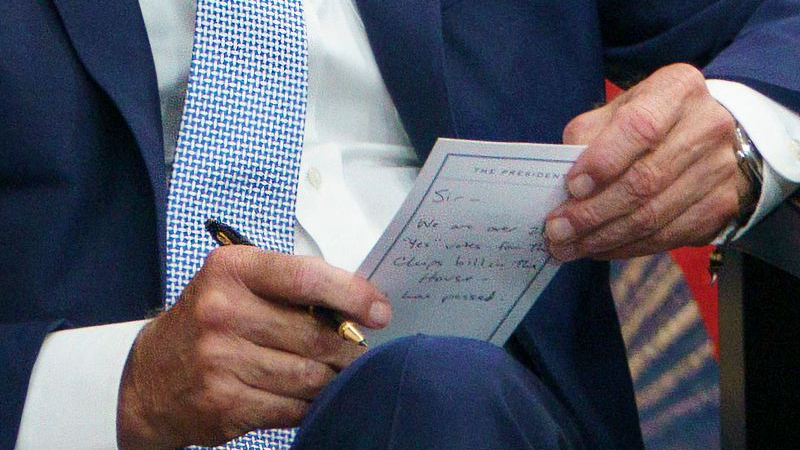 U.S. President Joe Biden holds the note given to him saying that the "CHIPS-plus" bill has received enough votes to pass the House during a meeting with CEOs about the economy in the South Court Auditorium of the Eisenhower Executive Office Building, next to the White House, in Washington, DC on July 28, 2022. /CFP

U.S. President Joe Biden holds the note given to him saying that the "CHIPS-plus" bill has received enough votes to pass the House during a meeting with CEOs about the economy in the South Court Auditorium of the Eisenhower Executive Office Building, next to the White House, in Washington, DC on July 28, 2022. /CFP

The U.S. Congress on Thursday pushed forward a major bill to boost its chip manufacturing capabilities and "compete with China," which now goes to the White House, where President Joe Biden is expected to sign it into law as soon as early next week.

The CHIPS and Science Act, a $280 billion package that includes $52 billion in funding for U.S. semiconductor production, came after more than a year's wrestling between the Senate and the House of Representatives.

The approving process for the act, which is nicknamed "CHIPS-plus" bill, has been significantly accelerated in the past week, after Joe Biden met virtually with U.S. business leaders and labor leaders on Monday, during which he pushed for the fast legislation by Congress.

The Senate voted 64-32 on Tuesday to advance the bill, and the House voted 243-187 on final passage on Thursday.

What's in the bill?

The newly-passed bill provides about $52 billion in government subsidies to incentivize companies to produce semiconductors in the United States.

"This money is for companies to incentivize them to build in America, to help make up for the fact that it's much, much, more expensive to build a huge factory in the United States than it is in Taiwan or Malaysia or [elsewhere in] Asia," said U.S. Secretary of Commerce Gina Raimondo in an interview with Marketplace's Marielle Segarra, which was published on July 27.

It also includes a new, four-year 25 percent tax credit to encourage companies to build new chip factories in the U.S., which is estimated to be worth about $24 billion.

Notably, the legislation prohibits companies from building or expanding chip manufacturing plants in China for a decade if they take the U.S. grants to build factories in the country. In another word, it's forcing companies to pick one out of two choices – business expansion in China, the world's largest semiconductor market, or subsidies from the American government to build plants in the U.S.

It would also authorize $200 billion over the next 10 years to boost U.S. scientific research in cutting-edge tech areas such as artificial intelligence (AI), robotics and quantum computing, to "better compete with China."

The Chinese Embassy in Washington said China "firmly opposed" the bill, adding it was entrenched in the Cold-War and zero-sum game mentality and against the common aspiration of people from all sectors in China and the U.S. to strengthen exchanges and cooperation.

Chinese Foreign Ministry spokesperson Zhao Lijian also pointed out on Thursday that "certain provisions in the act restrain normal sci-tech cooperation between China and the U.S.," and China is "firmly against it."

It is up to the U.S. how it wants to develop itself, Zhao said, "but it should by no means create hurdles for normal technological and people-to-people exchanges and cooperation with China, still less deprive China of or undermine China's legitimate development rights and interests."

He said China-U.S. science and technology cooperation serves the interests of both sides and promotes the progress of humanity. "Imposing restrictions and seeking decoupling will only hurt others and oneself alike."

In addition to the legislation, the U.S. has also been lobbying South Korea, Japan and China's Taiwan to form a so-called "Chip 4" semiconductor alliance, aiming at excluding the Chinese mainland from global semiconductor value chains.

Although U.S. officials have repeatedly justified the bill with "national security" or "America's future," they did not hide their intention of containing China's development in the chip sector.

Explaining what a company would need to do to access the federal subsidies, the U.S. commerce secretary said that "there will be a lot of strings attached," among which is that "[It] can't be used for investments in China or any other country."

Gao Lingyun, an expert at the Chinese Academy of Social Sciences (CASS) in Beijing, told the Global Times on Wednesday that the bill is eyeing containing China's development and giving an edge to U.S.' technological advance.

Echoing Gao's idea, Wang Peng, a research fellow at the Beijing Academy of Social Sciences, said the U.S. is using the bill "to force companies in countries and regions of key status on the global chip supply and industrial chains to play by U.S. rules," according to Global Times.

Some companies, including U.S. chip manufacturer Intel, have been lobbying lawmakers to ease standards for qualifying for the CHIPS fund for companies doing business with China, Wall Street Journal reported earlier this month, citing people familiar with the matter.

The Chinese market makes up for 20 to 30 percent of Intel's total annual revenue.

China is highly concerned about the passage of the bill, a spokesperson for the Chinese Ministry of Commerce said in a statement published on its website, noting that the act "should be in compliance with WTO's relevant requirements and comply with the principles of openness, transparency and non-discrimination."

"The bill provides huge subsidies to the domestic chip industry in the United States, which is a typical differentiated industry support policy," said the spokesperson.

"Some provisions restrict the normal trade and investment activities of relevant companies in China, which will distort the global semiconductor supply chain and disrupt international trade," the spokesperson said, adding that China will take measures to protect its legitimate rights and interests when necessary.

Wang Peng, a researcher at the Intelligent Social Governance Research Center of Renmin University of China, told National Business Daily that the legislation is not conducive to the optimal configuration of the global industrial chain and supply chain of chips, as it deliberately adds many restrictions, which may lead to worsening inflation.

Weng Guanxing, a lawyer with Wintell & Co. who specializes in international supply chain issues, said the restrictions in the bill targeting China are against basic market laws as the bill uses government power to forcibly change the international division of labor and resources in the semiconductor sector.