Download
Tornadoes in numbers: Big data reveals how they work in China
By Liu Tianwen 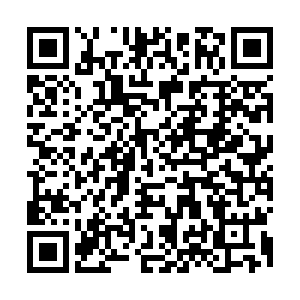 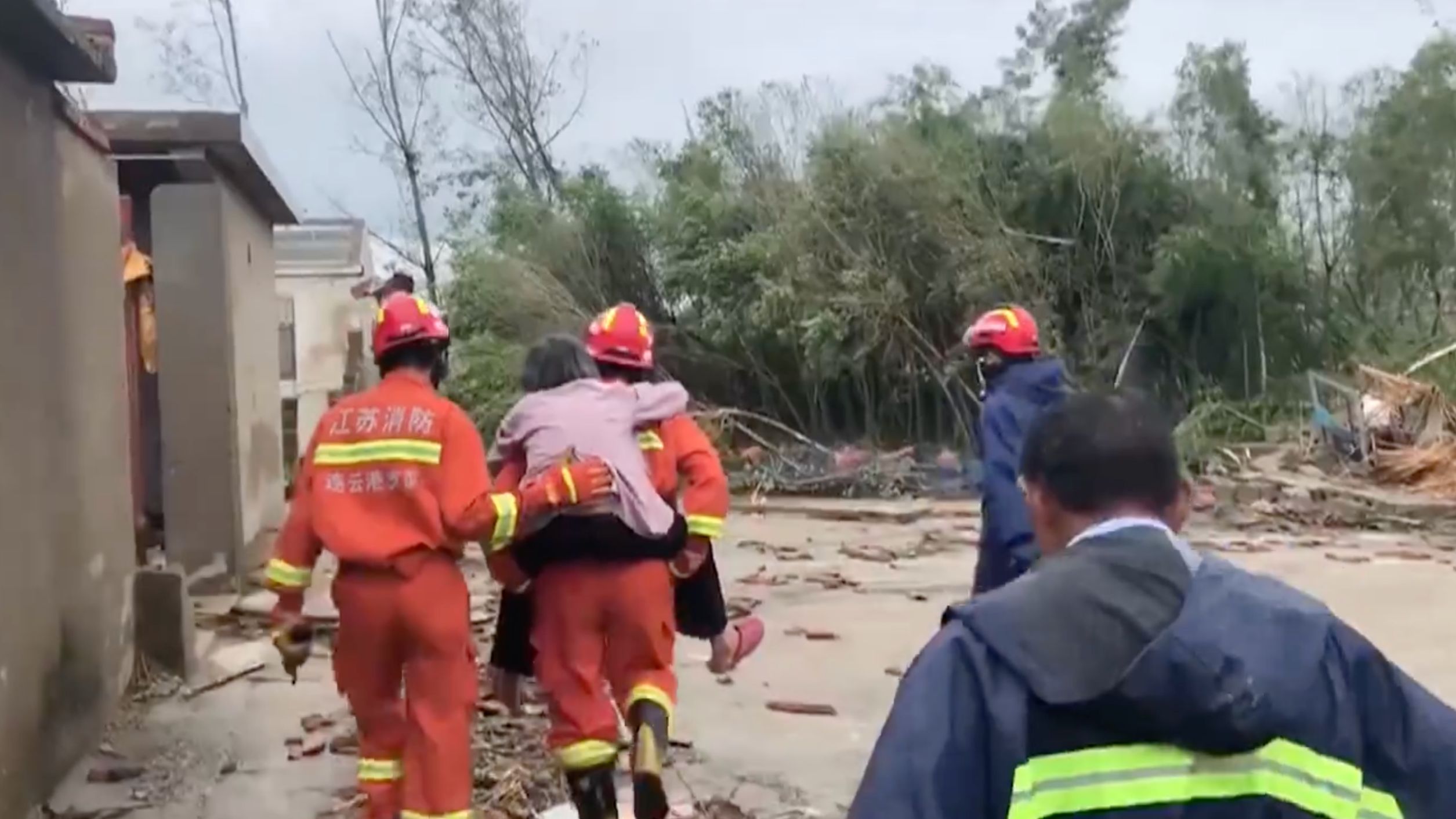 A tornado is a column of air rotating at immense speed that extends from a thunderstorm and connects to the ground.

Unless a tornado forms a condensation funnel made up of water droplets, dust and debris, it cannot be seen as wind is invisible.

Most tornadoes are relatively small and weak, but the few that grow into large ones are quite violent and destructive.

Tornadoes can be several meters or hundreds of meters wide, while the wind speed inside ranges from 50 to 150 meters per second. They can stay on the ground for a few minutes to several hours.

1. How are tornadoes formed?

The sun heats the ground and warm, moist air rises, making clouds grow into a sufficient height and turn into a thunderstorm.

As the thunderstorm matures, a supercell formed, which is known as a rotating thunderstorm. Scientists believe tornadoes form from supercells.

Moisture drawn into the rotating updraft, or a mesocyclone, starts to form a funnel cloud until it touches the ground, a tornado is born, according to National Geographic. 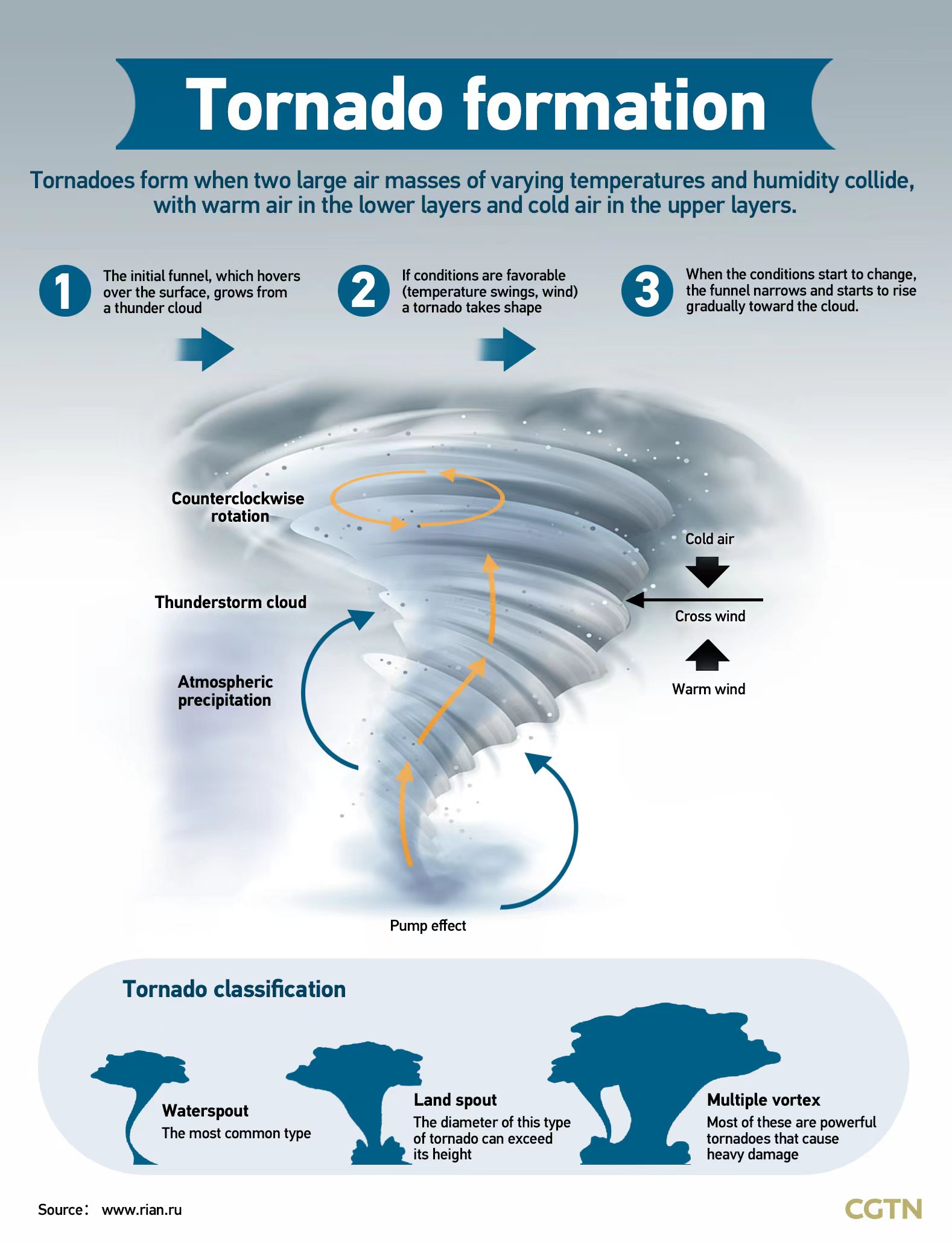 2. What type of damage can tornadoes do?

Scientists estimate a tornado's intensity with the Enhanced Fujita scale (EF scale), using units 0 to 5, based on wind speeds and damages they cause.

Tornadoes at EF2 and above are strong tornadoes, at EF2 itself large trees get uprooted. 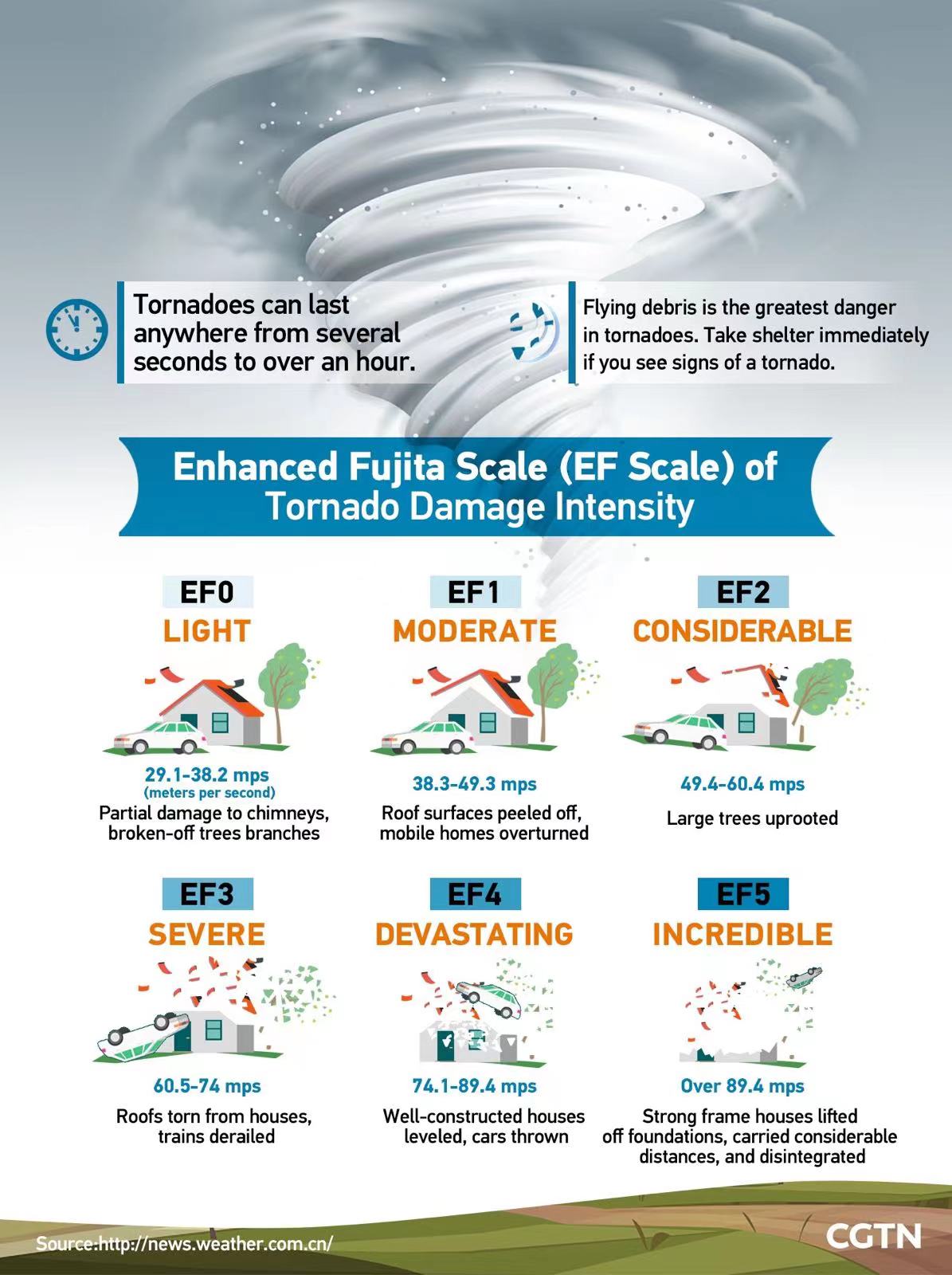 3. Where do tornadoes occur in China?

Tornadoes occur in many parts of the world, including the United States, Russia, China, Japan and Australia, among which the U.S. has the most tornadoes. There were over 1,000 tornadoes as of July this year in that country, according to its National Oceanic and Atmospheric Administration.

In China, tornadoes are most frequent and attain the highest intensities in the middle and lower reaches of the Yangtze River area. East China's Jiangsu Province has the most tornadoes, with an average of 4.8 tornadoes each year, south China's Guangdong Province follows, according to statistics from China's National Climate Center (NCC) from 1991 and 2020. 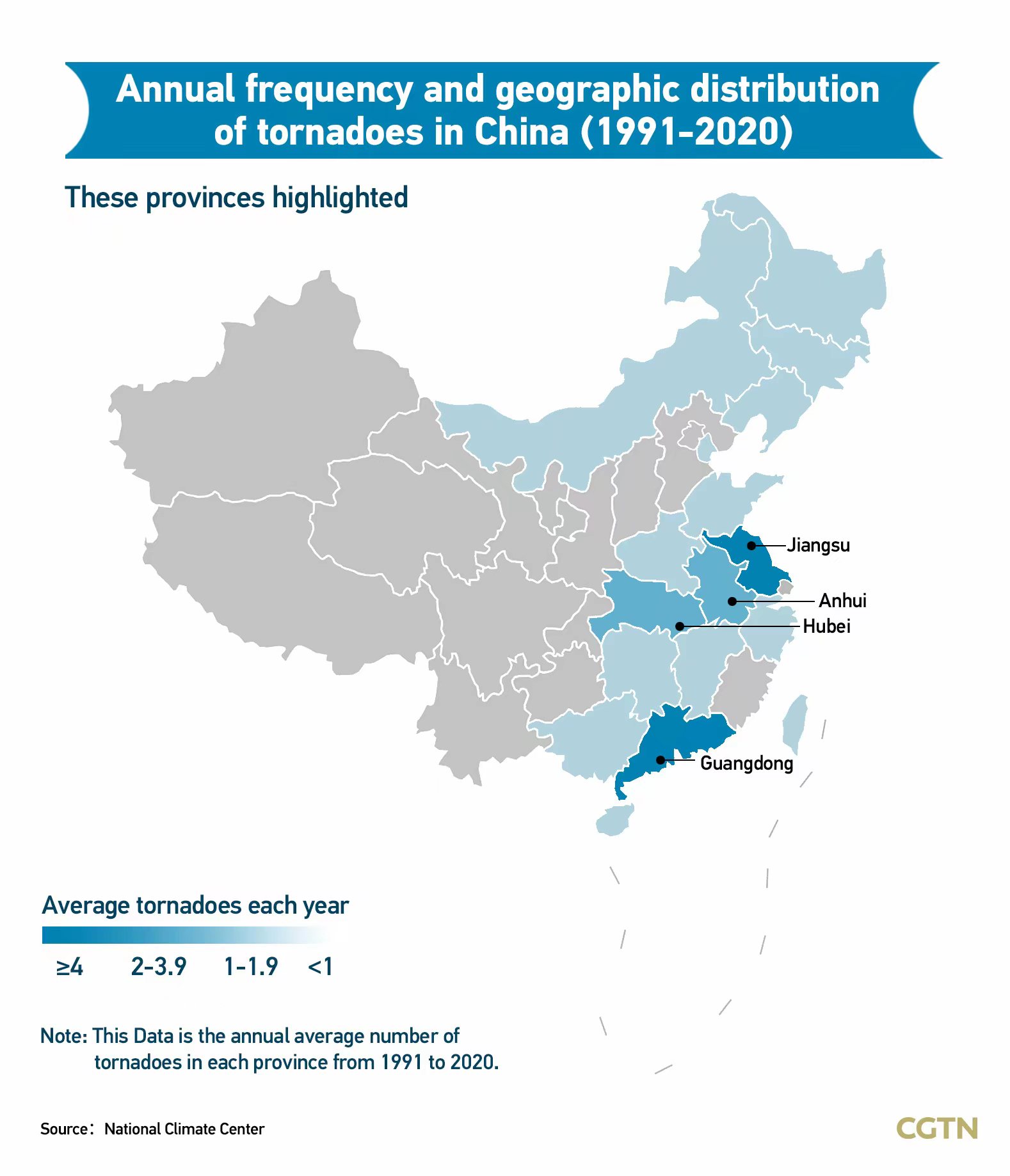 4. When do they occur in China?

Of the 165 tornadoes that occurred in China between 1961 and 2010, most tornadoes developed in spring and summer, with 92 percent occurring between April and August, according to a study published in Meteorological Monthly.

Peak months are July (28 percent) and April (19 percent) in the country, with most occurring at EF2 and above. 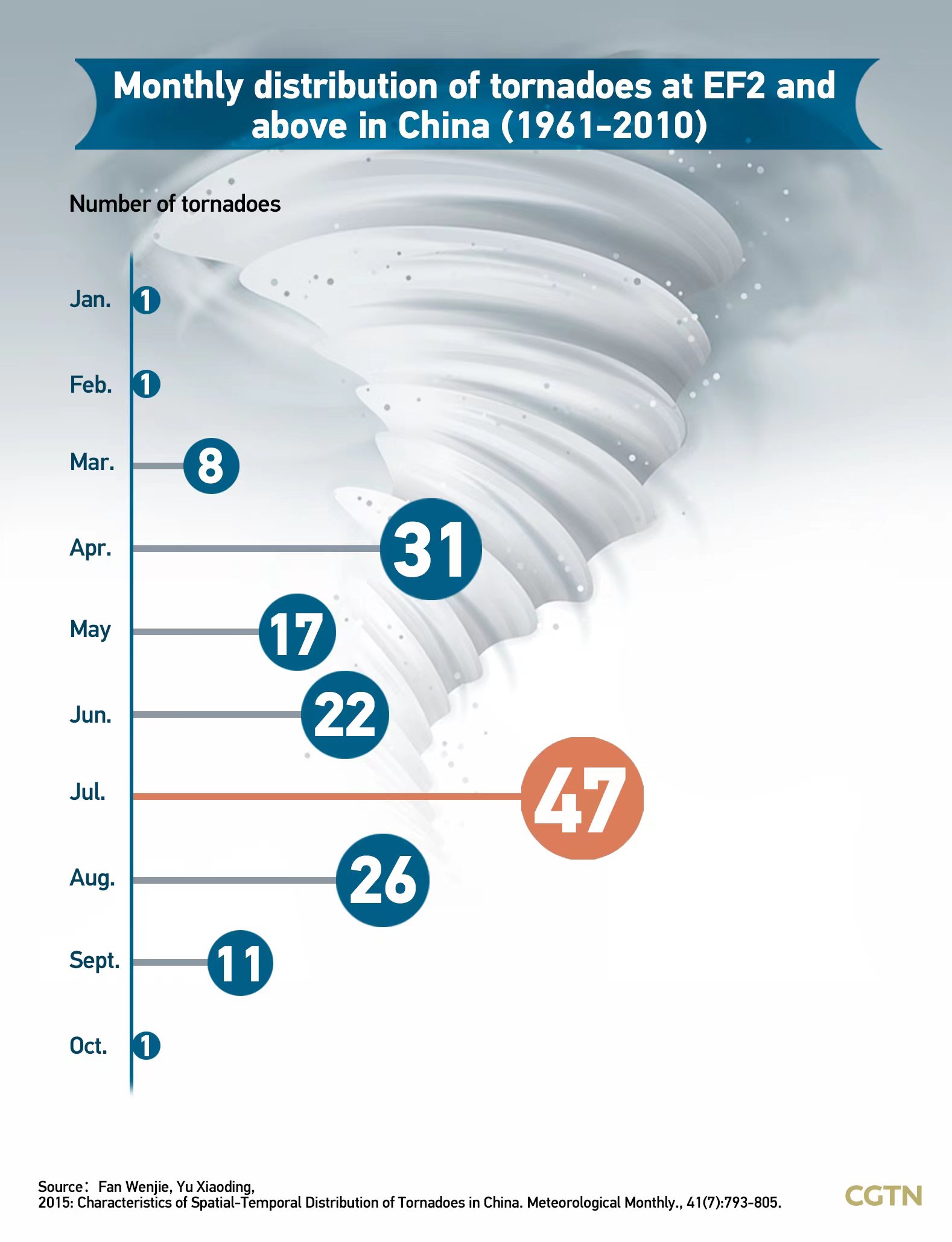 Although tornadoes can occur at all times of the day, they are most frequent in the afternoon.

According to the study, tornadoes of EF2 scale and above occurring  between noon (12:00) and 8 p.m. have accounted for 70 percent of the total number.

Weather China said the reason for tornadoes occurred most during this period is that after the sun heats the ground and surface layer of the atmosphere strongly in day time, severe convective weather is induced and sustained, thus tornadoes are likely to be born.

In addition to the afternoon peak, tornadoes often appears in the early morning. 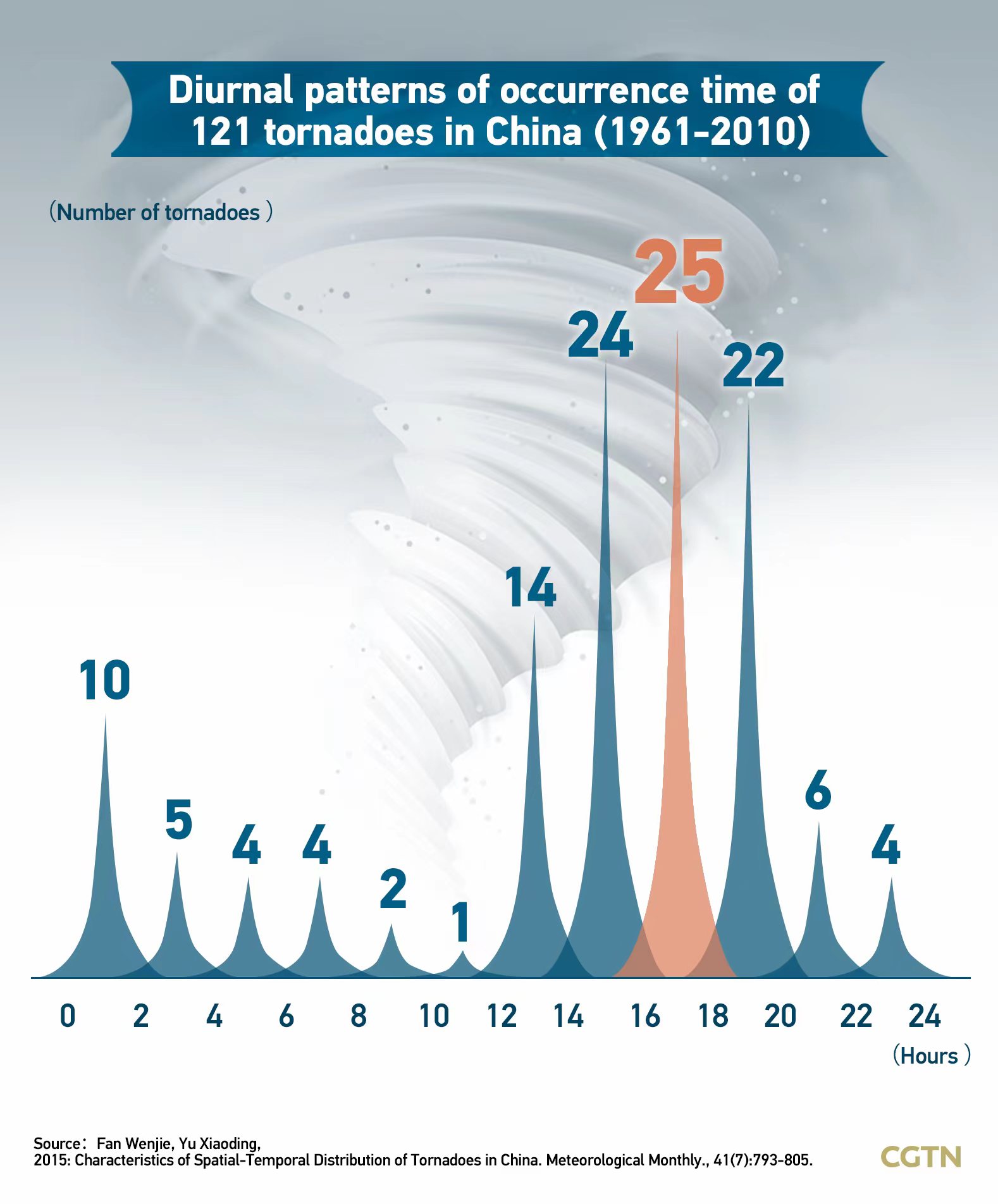 According to statistics released by NCC, from 1991 to 2020, an average of 38 tornadoes were reported per year in China.

Statistics show that there were relatively more tornadoes from the mid-1990s to 2008, with 2005 having the highest number of 75 tornadoes.

5. What's the difference between a tornado and typhoon?

Typhoons are tropical cyclones that form on water bodies, which last from hours to months. They are the same weather phenomenon as hurricanes and cyclones.

A typhoon can produce tornadoes.

As reported by China Media Group, at least three tornadoes, one a waterspout spawned from Typhoon Chaba across coastal cities of Guangdong Province on July 2. 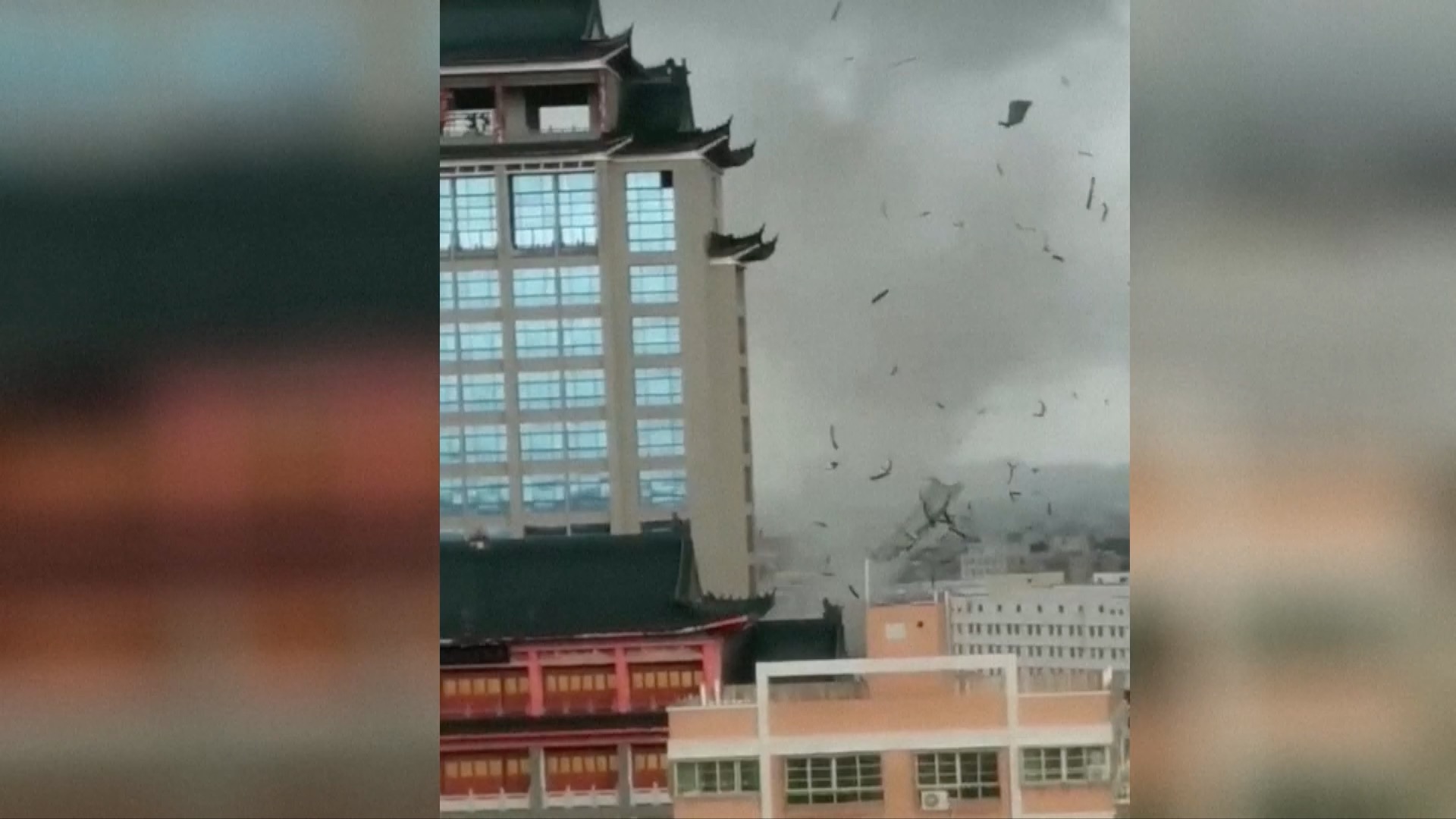 "It is not uncommon for a typhoon to produce at least one tornado," said Zhang Ling, chief forecaster of China's National Meteorological Center.

"The right front of a tropical cyclone is ideal for tornadoes. A typhoon can generate a supercell and favorable conditions for a tornado formation," Zhang added.

It is not easy to monitor tornadoes worldwide with existing meteorological observation equipment, and a weather radar is often limited by curvature of the earth, radar blind spots and terrain occlusion, according to China Meteorological Administration (CMA).

China has carried out tornado monitoring and early warning since 2017 in tornado-prone provinces, and launched a special work program last year, said CMA.

Jiangsu Province at present has established a tornado warning technical processes with cities and counties integrated as one, to predict and post warning effectively.

The graphic below maps the paths of typhoons that posed threats to China in the past five years. The thicker the lines, the higher the wind speeds. Combining these typhoon tracks, scientists can do more with tornadoes.

China's first tornado research center, Foshan Meteorological Service, which was established in 2013, has revealed the tracks of typhoons and tornadoes in Guangdong Province by studying their tracks in southern China, said Huang Xianxiang, chief engineer of the center.

7. How to stay safe during a tornado?

Falling and flying debris causes most injuries and deaths during a tornado. Go to the basement or an inside room without windows on the lowest floor, be sure to stay away from doors and windows of the house.

People outside should go to a low-lying area such as a ditch and lie flat. Avoid areas with trees, poles, billboards and walls.

If people are in a vehicle, it's best to seek shelter in the closest structure. If that is not possible, scientists advise to buckle the seat belt and crouch down in the car, or just abandon the vehicle and lie in a nearby ditch, according to CNN.