Download
The Spotlight: Battle to be Britain's next PM
CGTN 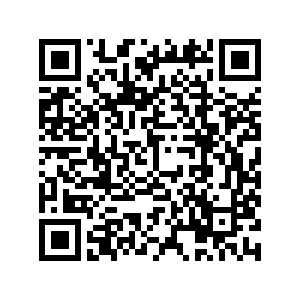 In one month, the identity of the UK's next prime minister will be revealed.

Ahead of the September 5 announcement, the race between Liz Truss and Rishi Sunak to be Boris Johnson's successor as leader of the Conservative Party, and by extension the new prime minister, continues to be hard fought in debates and hustings across the country – but key indicators suggest one candidate has a solid lead. 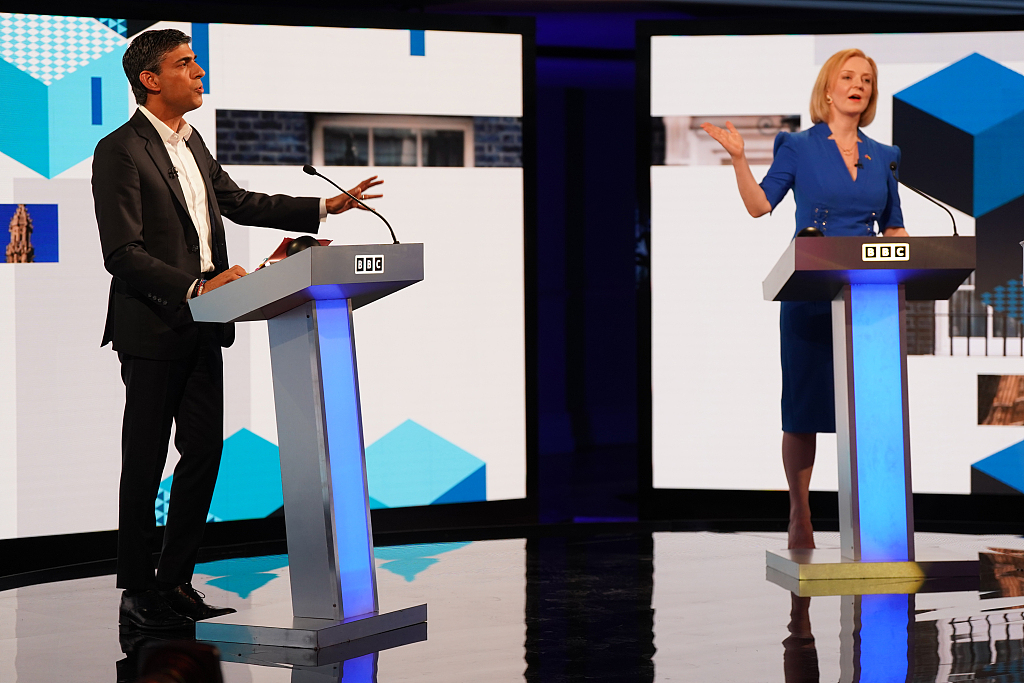 From polls to endorsements, the momentum is with Truss, the current foreign secretary, and with the estimated 160,000 Conservative members – about 0.3 percent of the total UK electorate – already starting to cast their ballots, former chancellor Sunak faces an uphill battle.

Polls are only a snapshot in time, but two carried out in recent days tell a consistent story as voting gets underway. YouGov put Truss on 60 percent to Sunak's 26 percent, while ConservativeHome, a popular blog for members, gives the foreign secretary a lead of 58 to 26.

Sunak's team argues that the reception he receives on the ground suggests a much closer race: Polling a party membership is notoriously difficult, and a new private poll by Techne puts his deficit at just five points.

However, endorsements are also flooding in for Truss. Former leadership rivals hopeful of securing government jobs, including Penny Mordaunt, Tom Tugendhat and Nadhim Zahawi, as well as party favorite Ben Wallace, the defense secretary, have backed the frontrunner in recent days, a sign of the direction they think the race is heading. 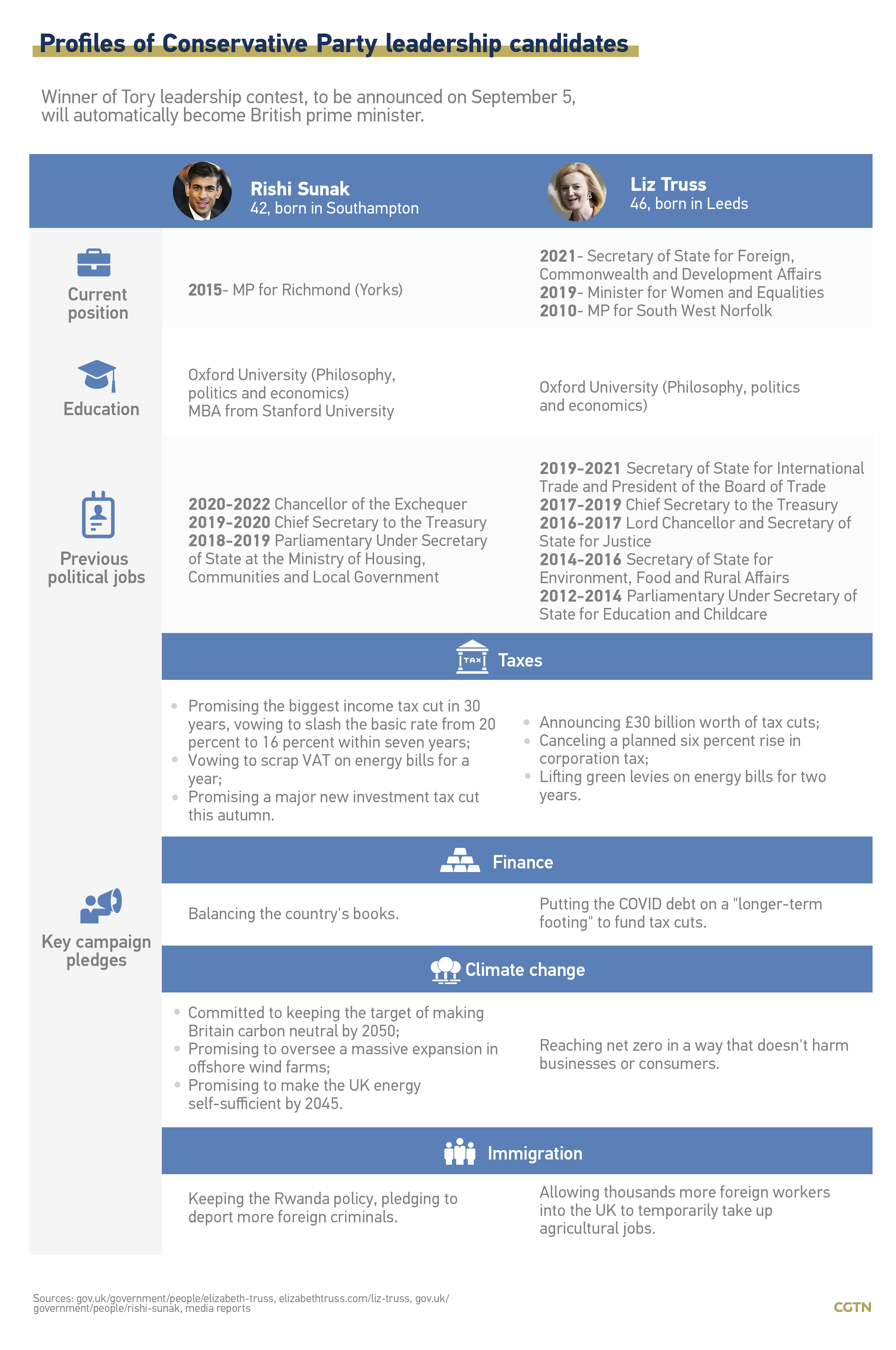 Three factors behind the state of the race

The campaign has exposed genuine policy and ideological clashes within the Conservative Party, but the momentum behind Truss and against Sunak – who received the support of the highest number of MPs in the first phase of the contest – has turned on three key factors.

Sunak should, on paper, be a compelling candidate to the Conservatives. He's a committed Brexiteer, a believer in low taxes and was an important early supporter of Johnson's leadership bid – all big ticks with the largely aging, eurosceptic, financially secure members.

Truss has been on a longer political journey, from a Liberal Democrat opposed to the monarchy to a keen supporter of the UK remaining in the EU and now a flag bearer for the Conservative right. Until a misstep this week on public sector pay, the 46-year-old has made promises with little blowback – though they may cause her problems if she does become prime minister. 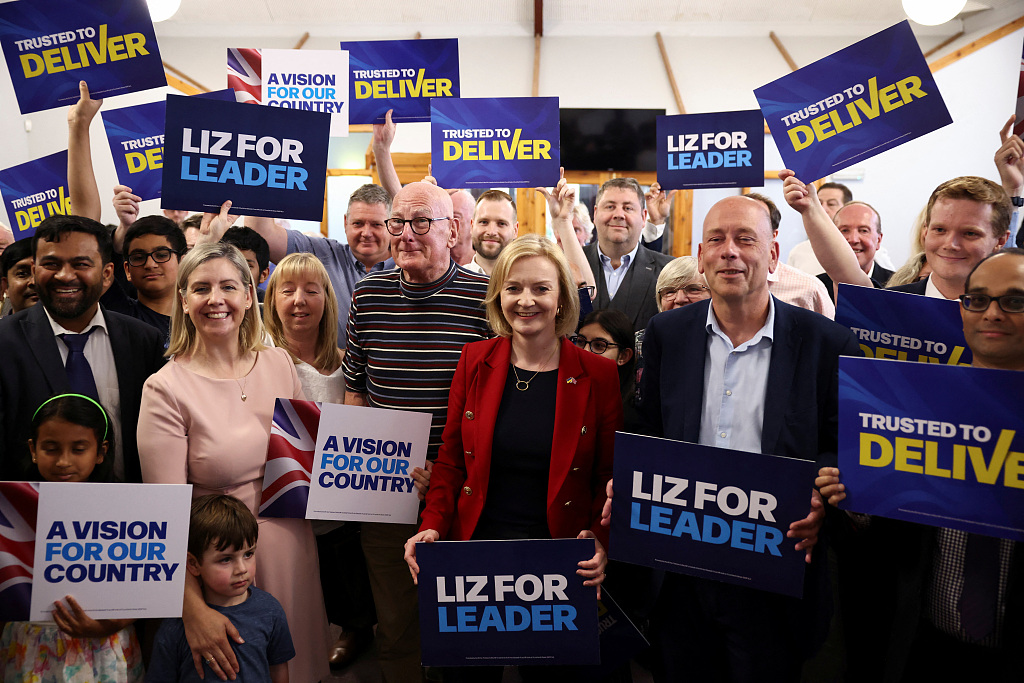 Liz Truss with supporters ahead of a hustings event, part of the Conservative Party leadership campaign, in Morley, England, July 28, 2022. /CFP

Liz Truss with supporters ahead of a hustings event, part of the Conservative Party leadership campaign, in Morley, England, July 28, 2022. /CFP

By contrast, Sunak has suffered from his legacy in government and in particular as chancellor, a job in which he had to make tough and often unpopular decisions. He was the man who sometimes had to say no, and like many former high profile chancellors is now having his record used against him.

Over the course of the COVID-19 pandemic he raised taxes significantly, an approach he says was fiscally responsible. As chancellor, he increased national insurance and announced a large rise in corporation tax.

Truss repeatedly says Sunak increased the tax burden to its highest point in 70 years, that this is damaging the economy, and that in government she argued against much of his agenda. She has promised an array of tax cuts, including on corporation tax, national insurance and a green levy on energy bills, worth around 30 billion pounds on entering office.

The proposals seem popular with the membership, but experts question whether her economic policy takes into account the difficult situation the UK economy is in. The Bank of England on Thursday warned that inflation could hit 13 percent in October, a 42-year high, and that the country was headed for a long recession.

Sunak's initial attempts to argue that he had taken the responsible path have made little impact, and he is now promising cuts when inflation, which he says is the root of the UK's economic problems, is under control. He says Truss' tax policies would only fuel inflation. 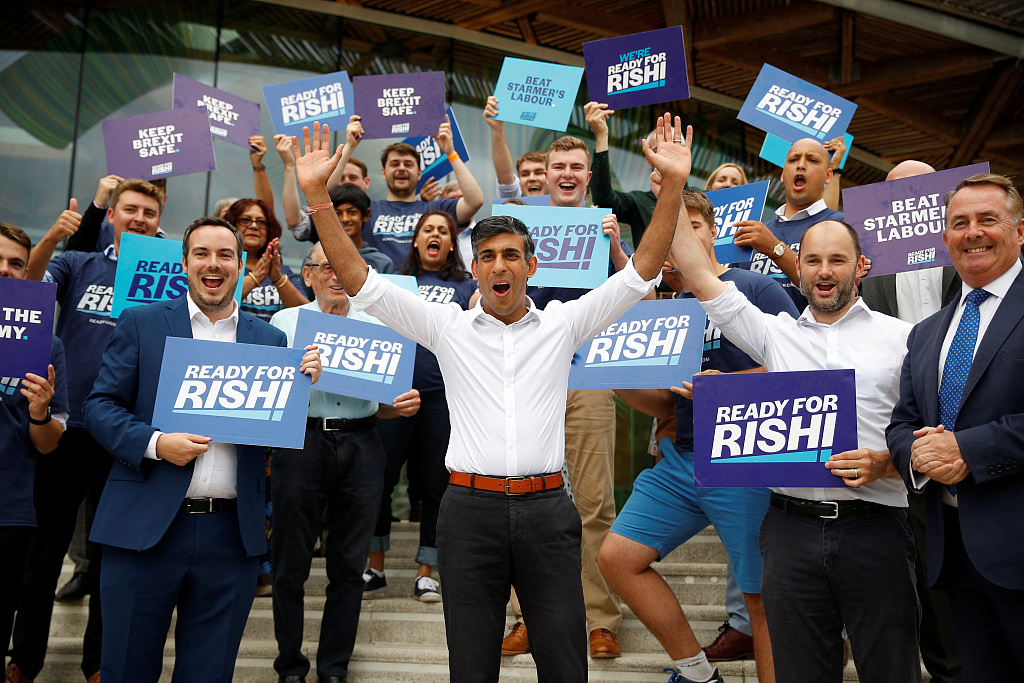 Rishi Sunak with supporters ahead of a hustings event, part of the Conservative Party leadership campaign, in Exeter, England, August 1, 2022. /CFP

Rishi Sunak with supporters ahead of a hustings event, part of the Conservative Party leadership campaign, in Exeter, England, August 1, 2022. /CFP

Brexit remains a key issue for the membership and the right of the party.

Sunak's consistent support for leaving the EU would seem to give him an obvious advantage over the Remain-voting Truss. However, it's the foreign secretary who has the support of most members of the European Research Group, the hardline eurosceptic grouping within the Conservative Party.

Her commitment to overriding parts of the original deal struck between the UK and the EU via the Northern Ireland Protocol Bill has been hugely controversial, but also extremely popular with the right of the party.

Sunak, by contrast, is accused of not making the economic case for Brexit in government, and has cautioned against taking too aggressive a stance on the Northern Ireland protocol over fears of a trade war with the EU. 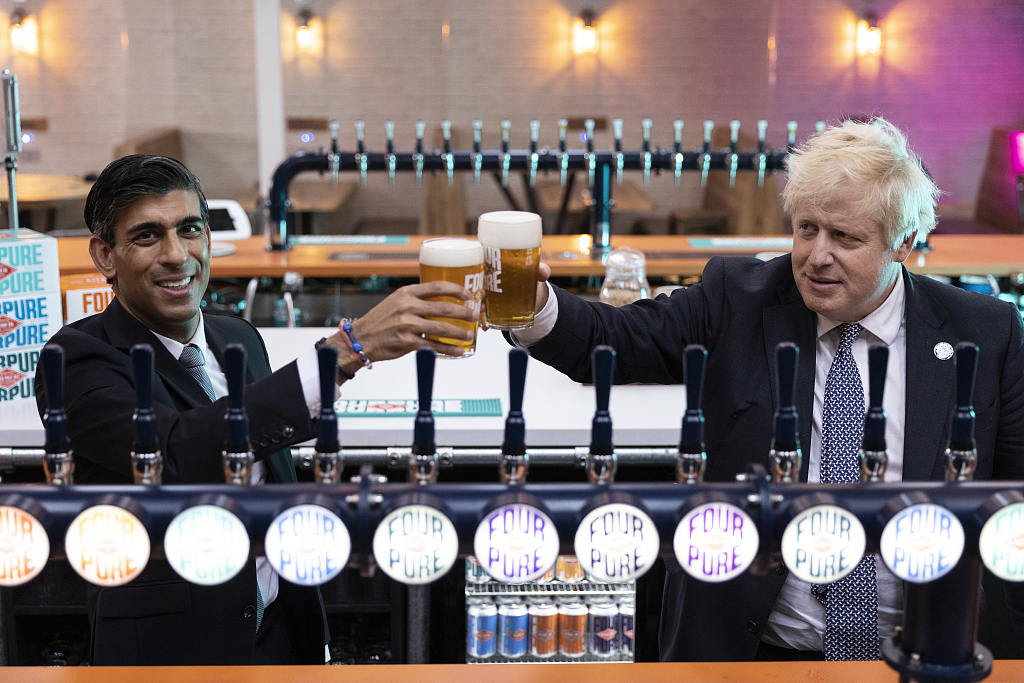 Rishi Sunak and Boris Johnson during a visit to Fourpure Brewery in Bermondsey, London, April 12, 2022. /CFP

Rishi Sunak and Boris Johnson during a visit to Fourpure Brewery in Bermondsey, London, April 12, 2022. /CFP

The third factor is the outgoing prime minister. Sunak was a strong supporter of Boris Johnson's leadership bid, but now stands accused of having “betrayed” Johnson – who remains popular with the membership – by resigning and helping giving momentum to attempts to force him out.

Sunak argues “enough was enough” after the scandal involving Chris Pincher, the former deputy chief whip, but the bad feeling his resignation caused has led to a strong “anti-Rishi” element in the contest driven by Johnson supporters.

Truss, by contrast, remained tight-lipped and in the cabinet as many around her resigned. She regularly praises Johnson in meetings with members, and that perceived loyalty is paying off with support from the outgoing leader's allies and donors helping push her towards Downing Street.