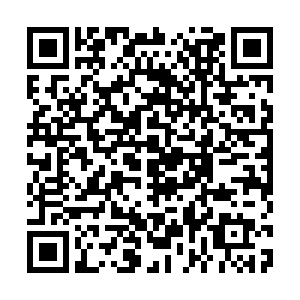 Huang Yongyu is a legendary Chinese artist who has made tremendous achievements in various realms of art, including ink painting, woodblock prints and literature.

With his artistic career spanning over half a century, the 98-year-old always empowers his artworks to convey the deep meaning of life in a light and natural way. 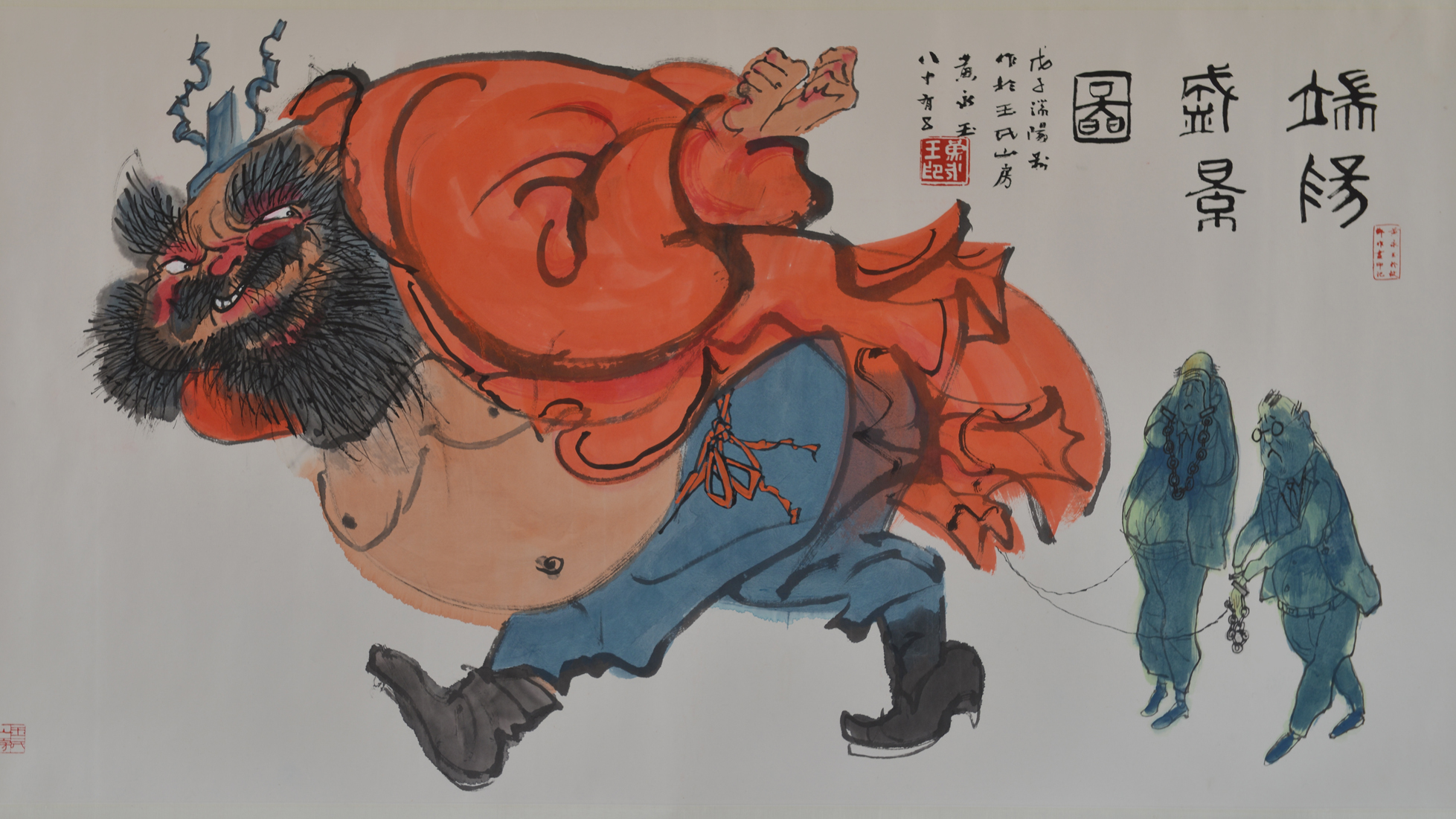 His carefree outlook and childlike innocence influence his work, which is full of life and vigor.

"Get up and move on. Don't bemoan that place" is Huang's philosophy about retaining his innocence in both his life and works.

"Some people remember that pit all their life and do not walk further, always scolding. People should get up quickly and move on," Huang said.
"To judge whether one person is interesting, we can see how he treats himself or whether he can tell his own jokes. 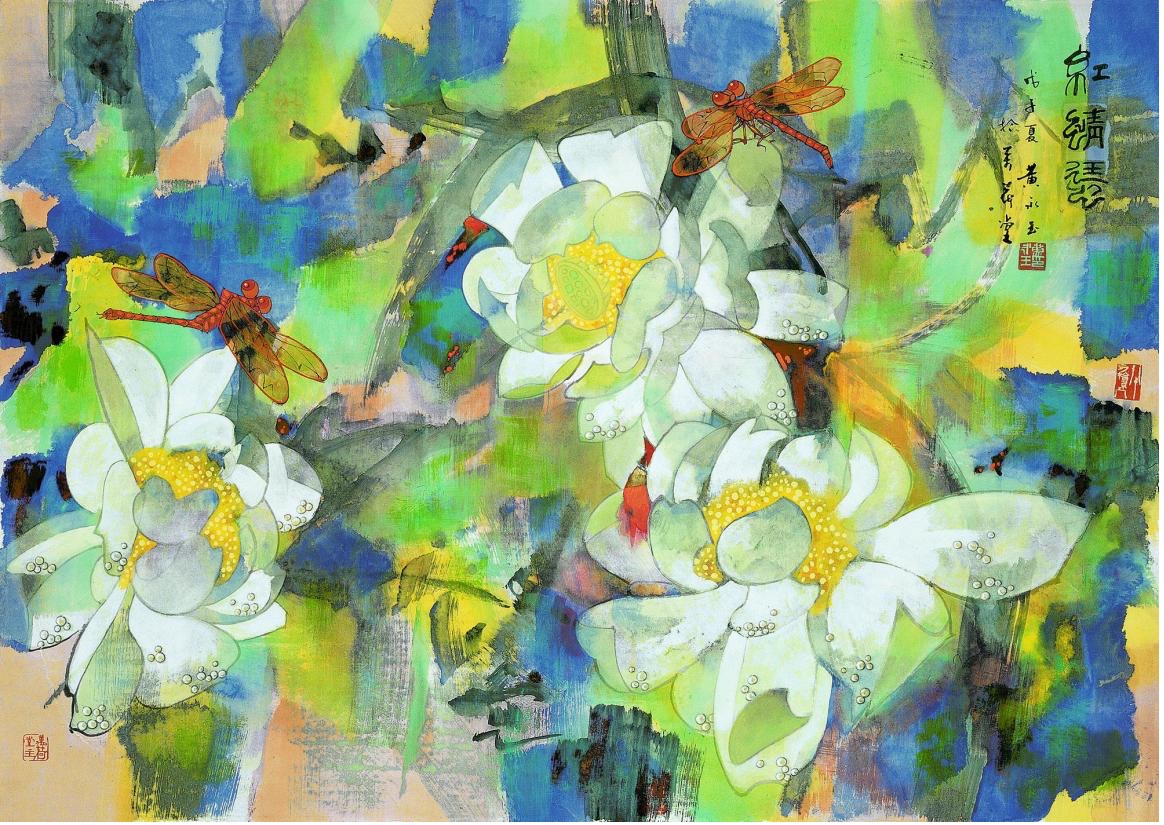 Huang embarked on his artistic journey at the age of 14.

Since then, he has brought his talents and creativity into full play and produced numerous renowned artistic pieces that exert far-reaching influences on different generations.

For Huang, art exhibitions are the most direct way to interact with his fans and art aficionados alike.

Having held art exhibitions at the age of 80 and 90, Huang's latest ambition is to hold a new exhibition when he turns 100.

"I have worked in art for decades. The only wisdom I gained is not to flaunt one's seniority," the self-taught veteran artist said. "God bless if I can live past 100 years old. When the time comes, I will hold an exhibit of my latest pieces."

Two years in the making, the preparations for his centennial exhibition are underway.

Scheduled on the ninth day of the seventh month in the Chinese lunar calendar in 2024, the upcoming exhibition is described by Huang Yongyu with one word – "good." 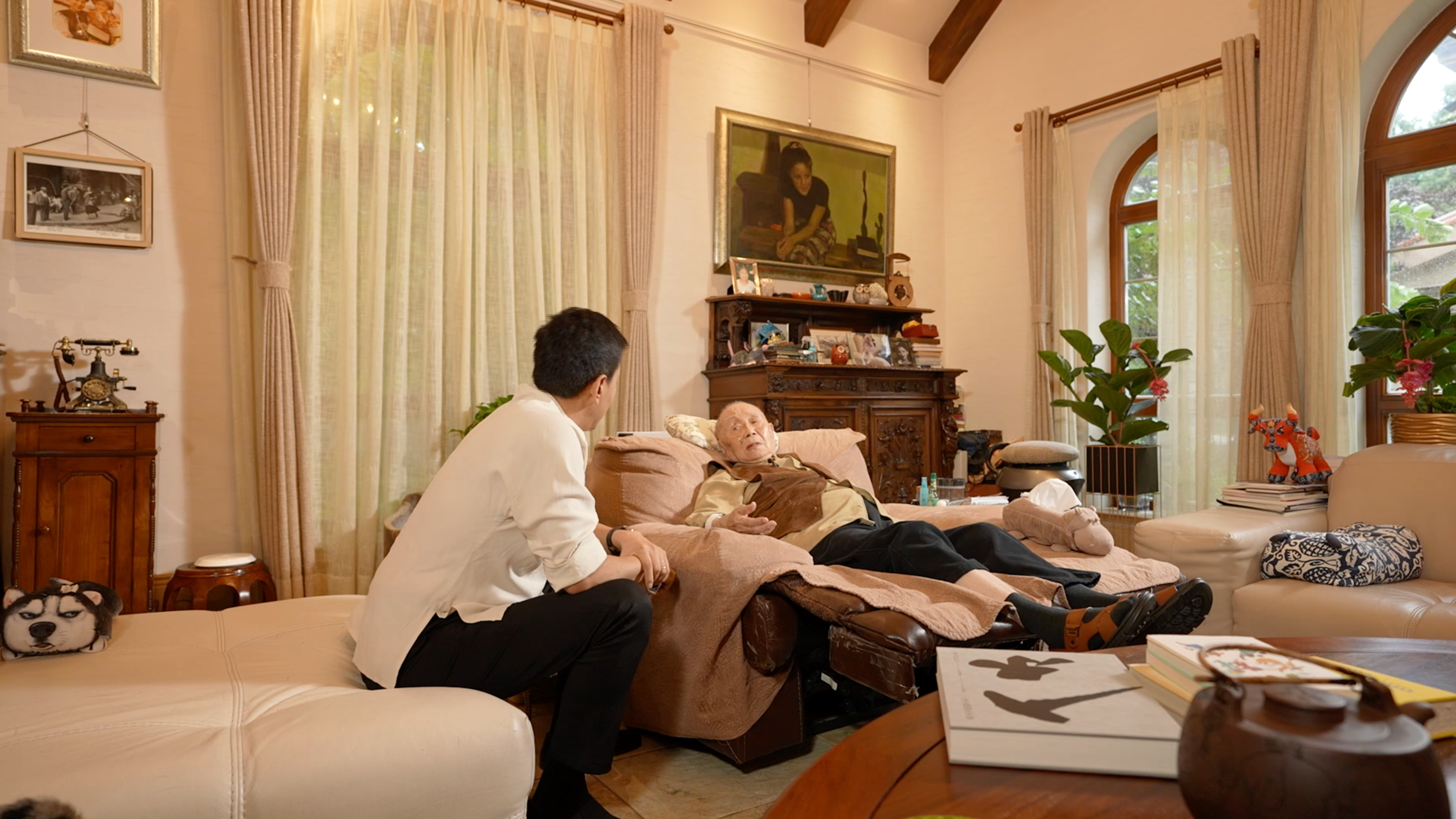 A frame from a video interview of Huang Yongyu at his home. /CGTN

A frame from a video interview of Huang Yongyu at his home. /CGTN

"It is good because it contains deep thoughts, and I think I can draw better than before," Huang explained.

His paintings are "about two things. One is painting with care. The other one is to express ideas."

His goal is always to " draw carefully, work hard, even if it is not good," he said, adding, "I'm not saying that I have to realize an ideal through my painting, not that at all."

"Sincerity is always more important than technique; that's why birds always sing better than humans," he wrote in an article once.

Despite the ups and downs in life, Huang always finds something to laugh about.

Born in 1924 in central China's Hunan Province, Huang left his hometown of Fenghuang in his teens.

In 1937, Huang started his personal journey. He said he survived "by picking up leftovers from the roadside."

Despite sorrow and suffering in his early years, he still has a positive attitude toward life and is not scared of death.

"I am not afraid to die, and I don't want to leave anything such as ashes or be put into some ancestral temple," he said. "I don't need that. So, I joke, after I die, please tickle me to see if I laugh." 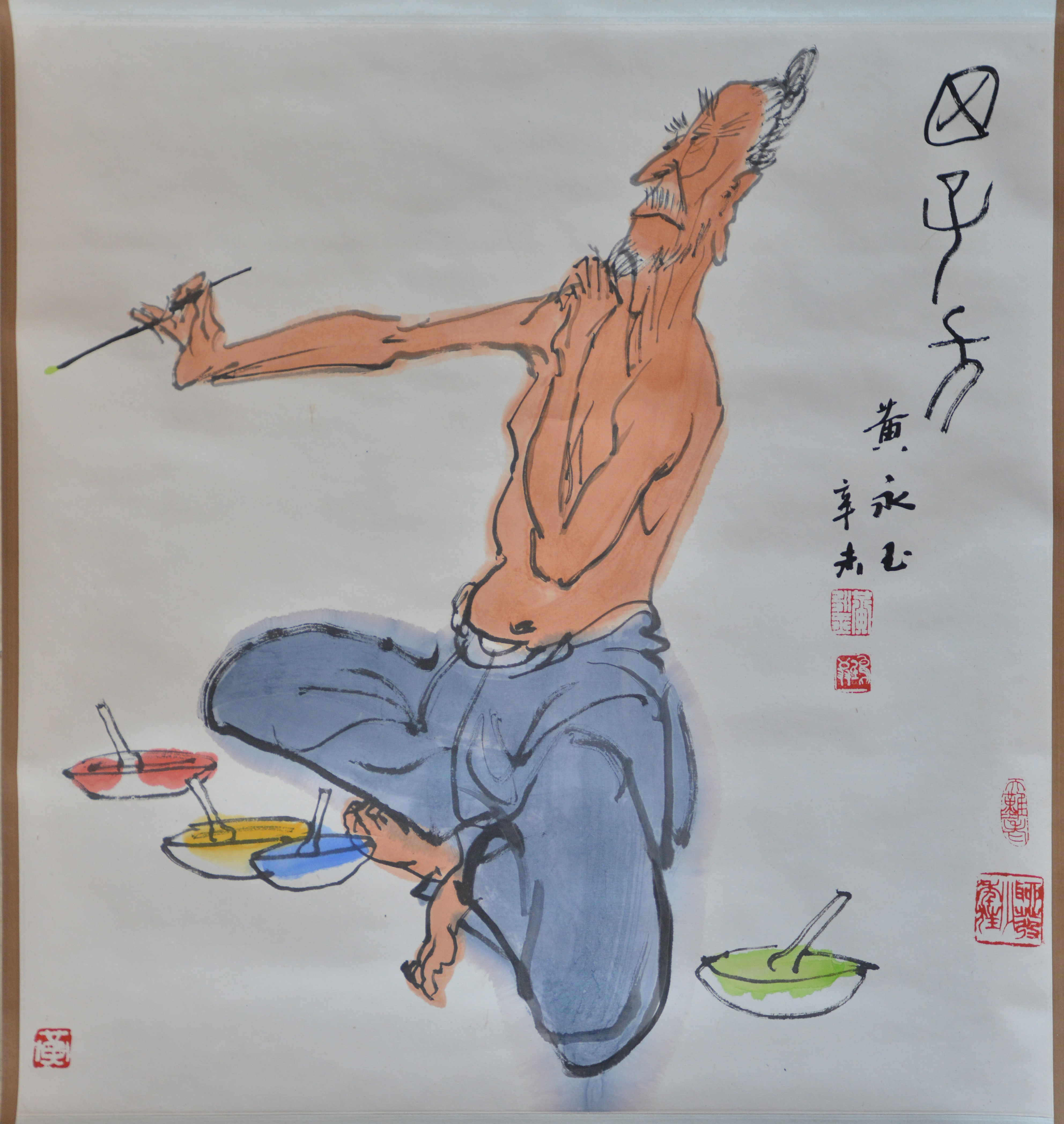 Huang studied literature and art on his own.

He took on a variety of jobs and learned all kinds of artistic skills along the way.

At 28, Huang became a professor at the Central Academy of Fine Arts, the leading fine arts academy in China.

He also designed the first monkey stamp at the age of 56.

In the 1990s, Huang went to Europe, visiting cities like Paris and Florence and depicting all kinds of people and scenery along the way.

In 2007, at age 83, Huang appeared on the cover of the fashion magazine "Mr. Fashion" as the oldest model to do so in the magazine's history.

Sharing his understanding of life through books

Huang's rich life experience gave him a deep understanding of life, which he wrote about in his books.

In 2021, Huang published more than 150 poems in "A Collection of Things that Incur Ridicule," or "Jian Xiao Ji."

On his 98th birthday, Huang announced the launch of a new 480,000-word book, "Day Reading"or "Zou Du," the third part of his long autobiographical novel "A Wanderer from the Carefree River." 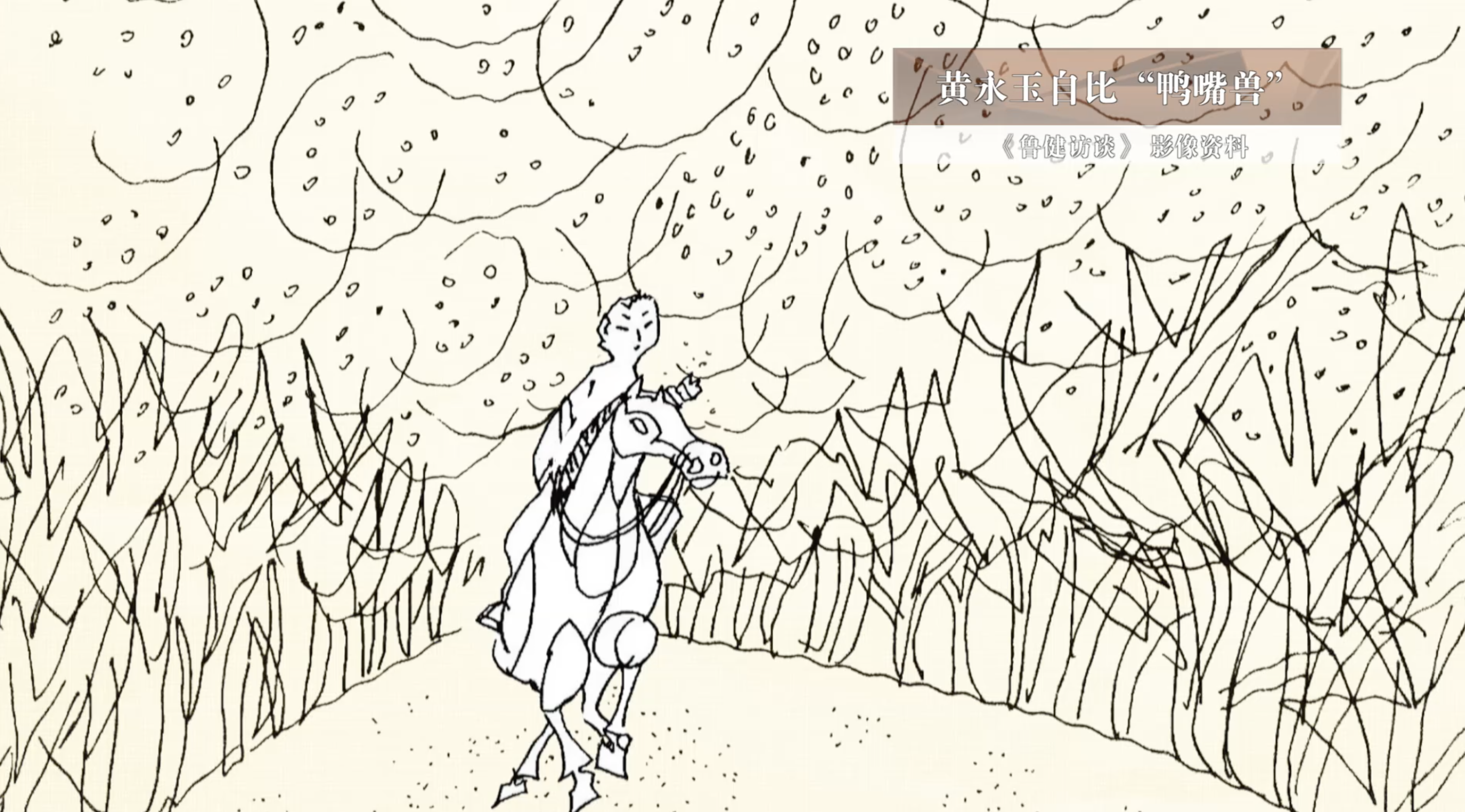 One of the illustrators from Huang Yongyu's book "Day Reading." /CGTN

One of the illustrators from Huang Yongyu's book "Day Reading." /CGTN

The protagonist of Huang in the book is Zhang Xuzi, who he describes as looking like a platypus.

"He is destined to live next door to the 'fairy tale' in his life. He is not a lone goose, and he has never let anyone abandon it. It's not a donkey; no one has ever 'chewed it.' Not a wolf, he is alone ... Zhang Xuzi is an animal that looks nothing but like a platypus. Duck beak, amphibious, full-body hair, oviparous, breastfeeding ... it is the most mischievous biologist," wrote Huang.

The character can be said to mirror Huang himself.

Huang believes that people need to stay low-key and humble no matter who they are.

For him, "It is good that people are willing to use, to see, and to listen" what he has created; the style of the painting is not that important.

"You have to come up with some new ideas, then do it. Do it with care. For painting, you cannot draw the same thing. An artist should not repeat in his life," he said. 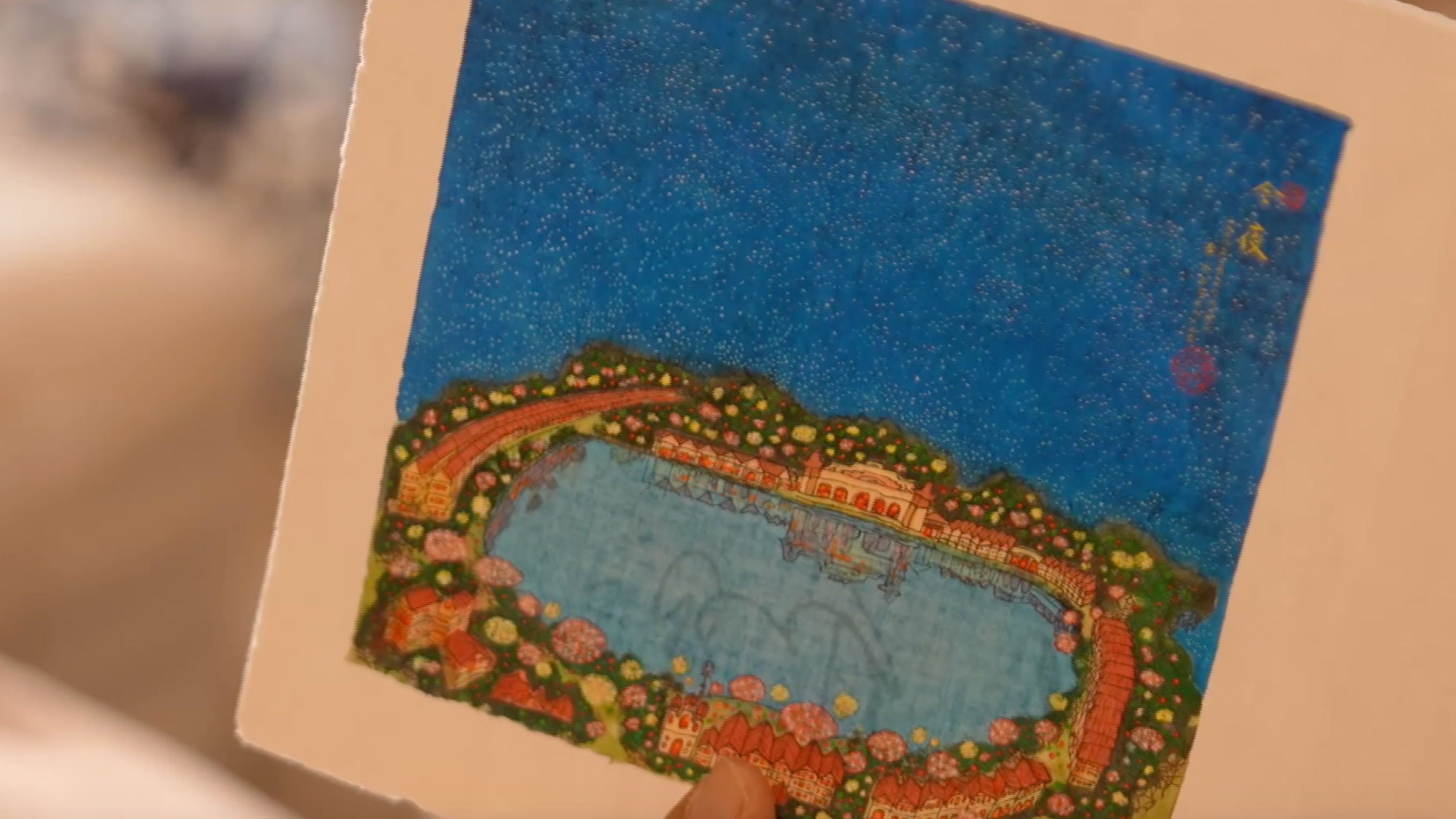 "Be happy and less sad"

In Huang's artwork, people can feel the weight of time but told in an easy and humorous way. In his eyes, the world is still vigorous and full of life.

"Everyone lives a normal life. Be happy and less sad," he said. "I drew a picture, painting the night view of our city. A starry night, with the title 'Tonight.' I hope all the people in the world can spend tonight like this. So sweet. So peaceful."