Download
UFC 279: Against all odds, Nate Diaz gets a fairytale ending
Josh McNally 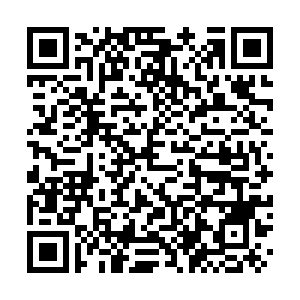 When two fighters go head to head in the UFC – or any sport for that matter – regardless of the result, there are two things at play: the fight and the story of the fight, and the main event of UFC 279, Nate Diaz vs. Tony Ferguson, has probably the longest and most convoluted story in MMA history.

The complete story of Nathan Diaz would require a Dostoyevskian tome. The shorthand begins on June 23, 2007, when Diaz beat Manny Gamburiyan to win the lightweight division of the reality show The Ultimate Fighter’s fifth season. At the time, this was a great opportunity; in the long run, it was clear he was locked in an allegedly exploitative and low-paying contract.

He spent almost a decade on the roster, becoming a fan favorite for his unique fight style and putting together a hit-and-miss 12-8 record. However, he still sometimes got paid less than half of his opponents – then in 2016 Conor McGregor needed a last-minute opponent.

Diaz stepped in. Diaz won. Overnight the fan favorite became a star and demanded to be treated like one. Although he lost the rematch at UFC 202, he was paid $500,000 plus pay-per-view points, significantly higher than the $15,000 he was paid to fight Rafael dos Anjos two years prior. 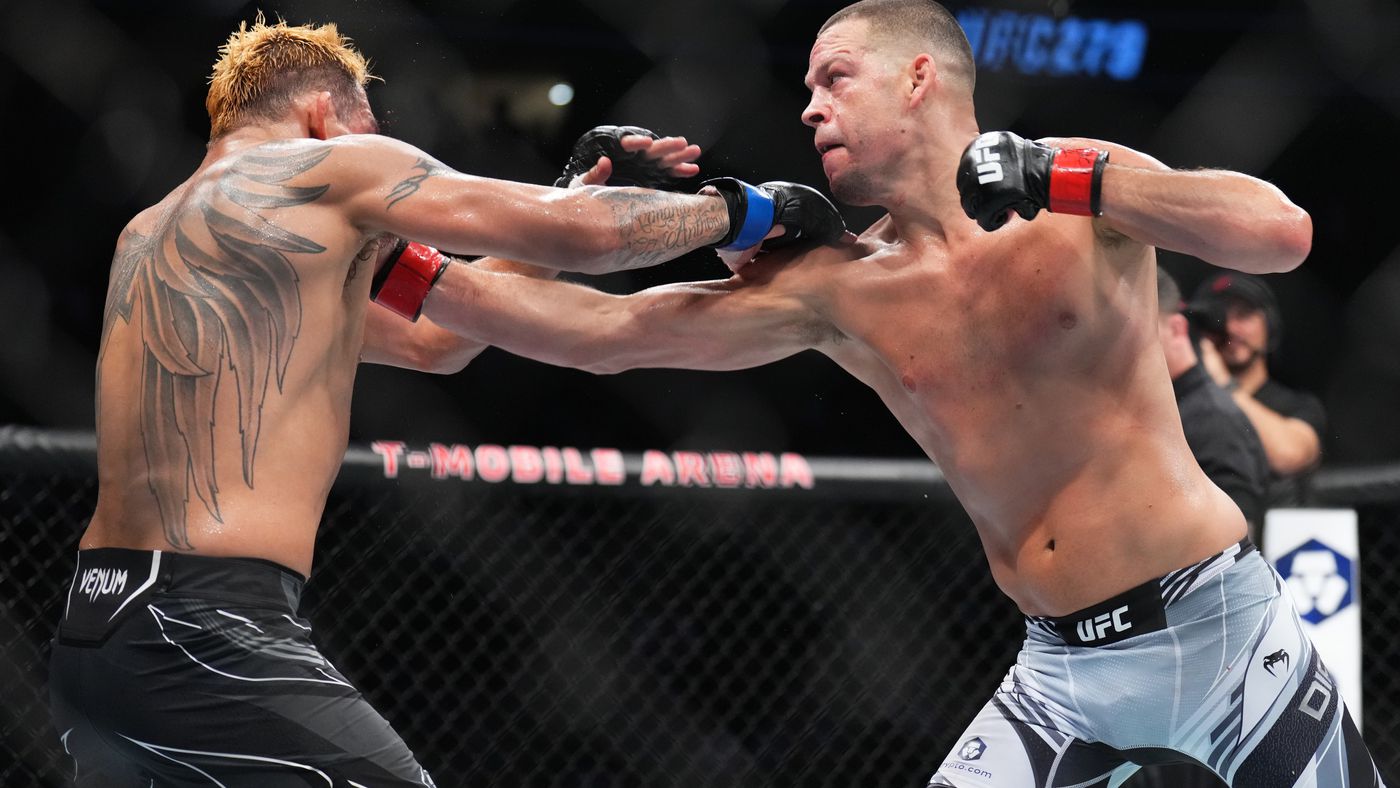 But the UFC refused to pay the man his money and Diaz sat out for three years until more main event fights with commensurate pay could be negotiated. If there’s one thing UFC President Dana White hates, it’s playing hardball, so even after making lots of money at UFC 244 with the BMF title bout with Jorge Masvidal and a comprehensive loss to current welterweight champion Leon Edwards, the UFC went out of their way to screw with Diaz in his final contracted fight.

After almost nine months of Diaz being very vocal in trying to get fights with Dustin Poirier, a trilogy with Conor McGregor and more, but claiming the UFC were ignoring him – even after he went and urinated on the front lawn of their Las Vegas head office – they finally matched 37-year-old Diaz with Khamzat Chimaev.

The 11-0 Chimaev is a decade younger than Diaz and defeated his first four UFC opponents in a combined 12 minutes and 52 seconds – a full non-title MMA fight is 15 minutes – and beat three of those without taking a meaningful punch.

All talk of Diaz’ chances at UFC 279 read like an obituary, and somehow got worse when the pre-event press conference was cancelled because of a backstage brawl involving Diaz, Chimaev and Kevin Holland.

And then 24 hours before the show, Chimaev weighed in seven pounds over the agreed welterweight limit and the main event was scrapped. To avoid the fate of UFC 151, Dana snapped into action and mixed around the top three fights on the card, creating the new main event: Nate Diaz vs. Tony Ferguson. 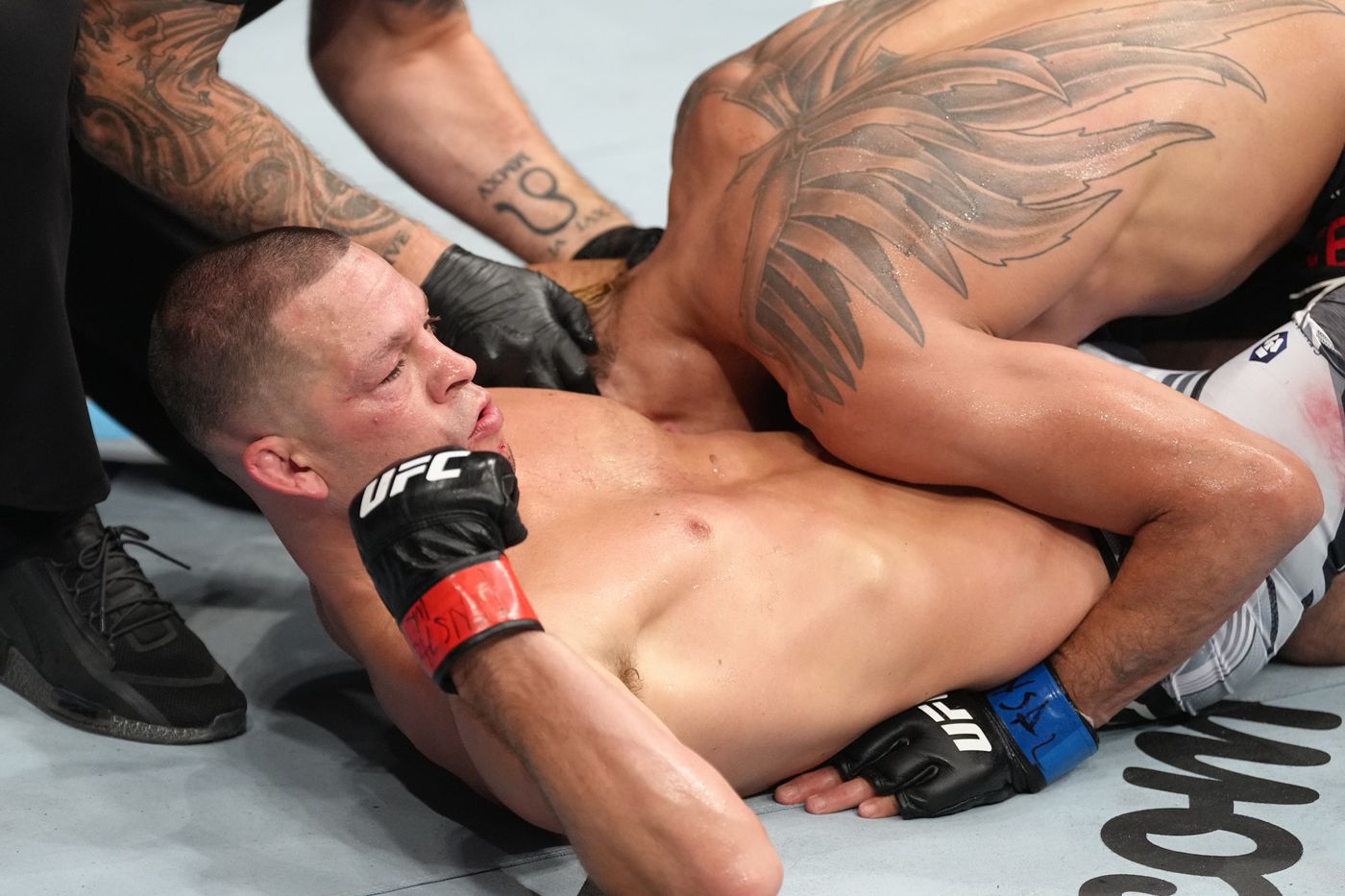 Nate Diaz flexes his bicep after forcing Tony Ferguson to tap out to a guillotine choke. /Zuffa

Nate Diaz flexes his bicep after forcing Tony Ferguson to tap out to a guillotine choke. /Zuffa

Once a maverick at lightweight, Ferguson is now a 38-year-old welterweight who has lost his last four, each in brutal fashion. He used to be able to hit anything on anyone from anywhere at any time, now he throws Hail Mary spinning elbows from the start and walks backwards into his opponent à la Dr Bosconovitch in Tekken 3.

With the exception of Ferguson’s shin being torn open by Diaz checking a low kick, for two rounds, that’s exactly how it played out. Ferguson moonwalking into Diaz’ boxing range and repeatedly coming out of it worse for wear.

Then in the third, things took a turn; Diaz, out of nowhere, stopped fighting, started walking away from Ferguson and was gesturing to the crowd as if to say his opponent was boring him. This used to be his way of aggravating his opponent, now it was clearly him taking breaks, and Ferguson let him.

Refreshed from all that crowd work, Diaz got back into things in the fourth round and, again, he was letting Ferguson come inside and then piecing him up with boxing, only now he was pushing forward with his final flurries. Backed into a corner, Ferguson shot in for the first takedown of the fight and immediately got choked out.

The crowd went nuts as Diaz flexed with his left bicep while holding onto Ferguson’s neck with his left. With all the terrorising on the feet and taunting to his face, Tony Ferguson forgot that Nate Diaz was Gracie Jiu Jitsu original, and leaving your neck out like that is a recipe for disaster.

It took years of being a fly in the ointment, hours of luck and a moment of skill to take the Nate Diaz UFC story from being an epic tragedy to a fighting fairytale