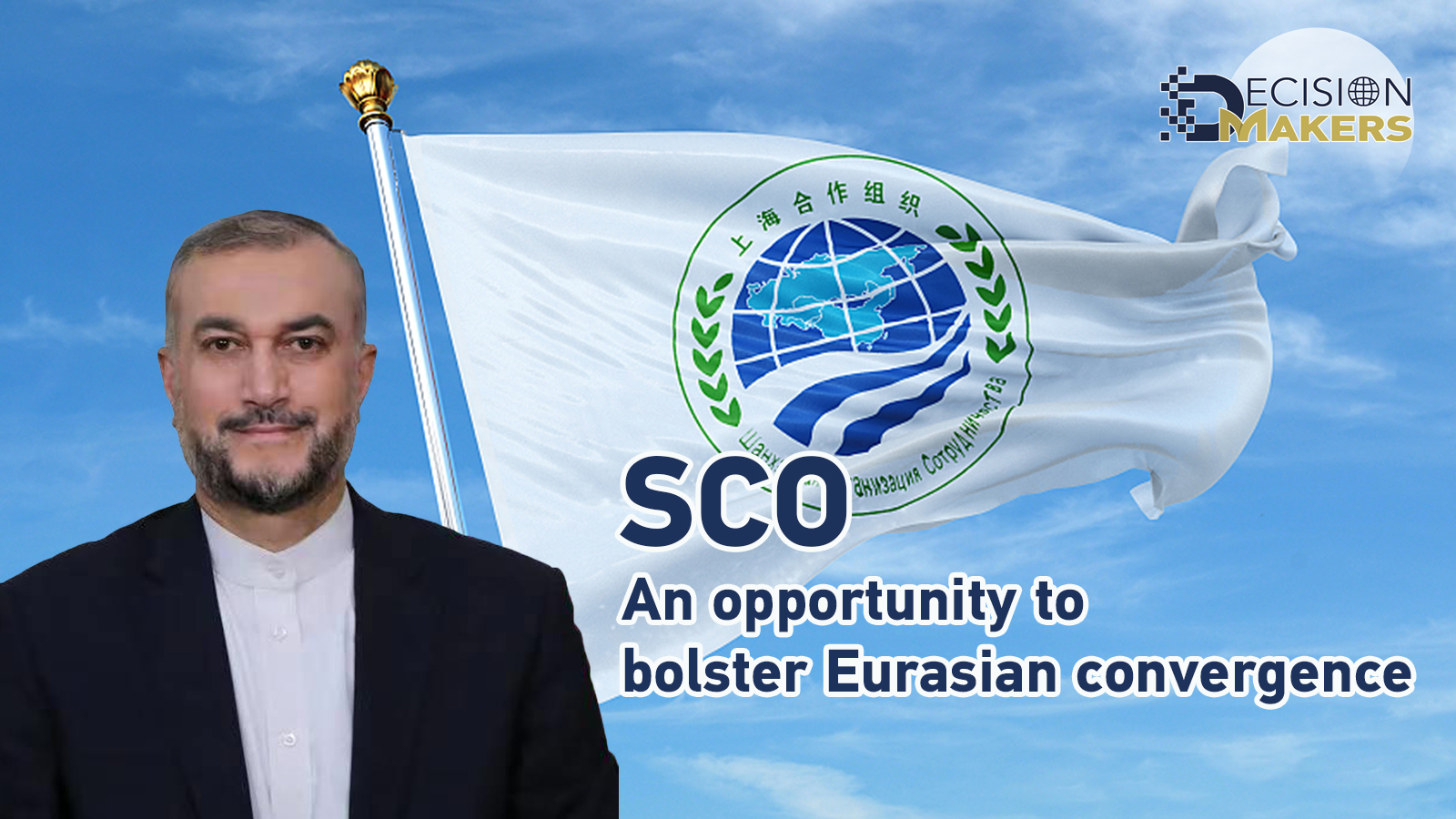 Editor's note: "Decision Makers" is a global platform for decision makers to share their insights on events shaping today's world. Hossein Amir Abdollahian is Minister of Foreign Affairs of the Islamic Republic of Iran. The article reflects the author's opinions and not necessarily the views of CGTN.

In today's world, East and West have lost their traditional implications and, in a way, have been replaced by regionalism or even continentalism. Hegemonic control and unilateralism are waning and the international community's transition towards a multipolar world and the redistribution of power in favor of independent countries are becoming inevitable trends.

In such a situation, maintaining peace and strengthening stability in our continent, Asia, is not only a choice, but a necessity. In fact, the Shanghai Cooperation Organization(SCO) could be considered as one of the most successful examples of regional cooperation. This organization is formed by a group of like-minded countries that seek to maintain order and the new Asian identity without interference from extra-regional powers.

As the world's largest regional organization, the SCO plays an outstanding role in covering more than 40 percent of the world's population, and generating about 25 percent of global GDP.

The total value of economic transactions among the SCO member states is around $20 trillion, which has increased 13 times compared to the period in which it was first established.

Since the Islamic Republic of Iran welcomes dialogue, negotiation and diplomacy and rejects unilateral approaches in its relations with other countries, in view of compliance with the basic principles of international law such as mutual respect for sovereignty, independence and territorial integrity, Tehran prioritized, as an important foreign policy objective, joining the SCO. This was realized in the first year of the presidency of Ayatollah Raisi when Iran became a full member of the SCO.

In this respect, approval of Iran's membership to the SCO during President Raisi's visit to Dushanbe, Tajikistan, by the SCO Heads of State Council in September 2021, was a diplomatic triumph which proves our dedication in pursuing a "balanced, smart, active and dynamic" foreign policy approach and the idea of ​​"Asian multilateralism." This achievement also marks a milestone in the development of our cooperation with the SCO member states in all bilateral, regional and international dimensions.

It is time for the SCO member states to furnish a promising future for the region's nations by taking advantage of the huge capacity and opportunities of multilateral cooperation. These capabilities could strengthen and fortify the organization and its members against political, security, economic, commercial and cultural challenges.

Investment facilitation and expansion of economic cooperation and mutual trade, that lead to sustainable development and stable security in the region, would not be feasible without providing security prerequisites. Therefore, in order to achieve this goal, security threats and challenges in the region, such as the critical situation in Afghanistan, should quickly be brought to the attention of its neighbors and member states of the SCO.

The considerable economic capacities and comparative advantage in each and every member state of the organization have grabbed the attention of the international community and provided remarkable opportunities for strategic partnership and extensive interaction among the members. 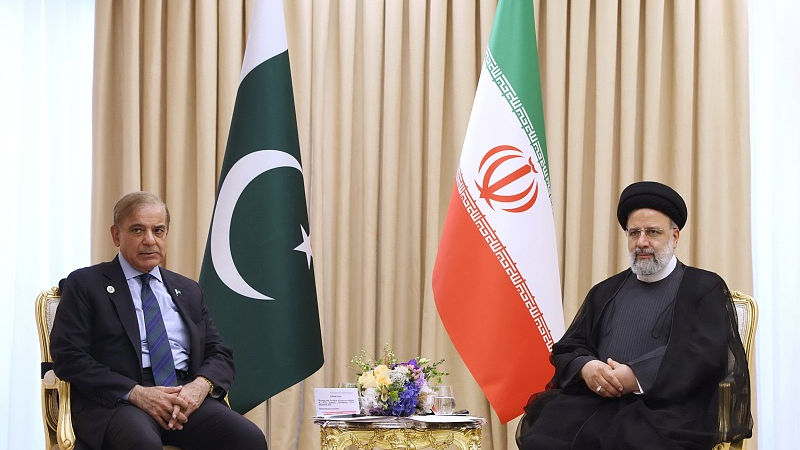 Among the valuable spheres of strategic cooperation between Iran and the SCO could be connectivity in the light of geographical advantages of Iran in proximity of two important bodies of water, i.e. the Caspian Sea and the Persian Gulf which enable member and observer states of the SCO to connect to the global supply chain and transfer and transit goods and energy to other parts of the world through the territory of the Islamic Republic of Iran.

As the potential hub of the Eurasian transit and transport corridors and connectivity of the region's infrastructure projects, the Islamic Republic of Iran can play a vital role in bolstering the North-South Corridor and linking Central Asia and Russia to India. Iran is located on the route of one of the most important and efficient corridors of the Belt and Road Initiative, namely the China-Central Asia-West Asia Economic Corridor which bridges East to West Eurasia. Throughout the past years, this route has been activated by both rail and road or combined transport.

The Islamic Republic of Iran in the character of a responsible member in the region, and across the international community, enjoys numerous capacities and capabilities in terms of  regional cooperation such as sustainable security and stability, rich energy resources, unique tourist attractions, the advantage of geographic coherence and national solidarity, extensive historical and cultural bonds with the SCO member states and observers, as well as rich cultural values that can prevent the growth of extremism throughout the region.

Among Iran's top ten export partners, China, India, and Pakistan are respectively ranked first, fifth and eighth. China and India are placed as first and fourth among Iran's top five import partners. In 2021, Iran's trade with the SCO member states surpassed $37 billion, which accounts for about 30 percent of the country's total foreign trade. During the same period, Iran's exports and imports with the SCO member states stood at $20.5 billion and $16.5 billion respectively.

Enhancement of relations and cooperation with the SCO countries constitute one of the main pillars of President Raisi's foreign policy, especially with regard to boosting and facilitating transport and transit corridors.

Iran provides safe, stable and reliable routes on the North-South Corridor and at the same time enjoys remarkable infrastructure in its southern port, especially the oceanic port of Chabahar. These are among Iran's strategic policies for the development of regional cooperation and the expansion of dynamic trade exchanges with neighboring countries.

Iran's full membership of the Shanghai Cooperation Organization is in line with the consideration of the principles of the Islamic Revolution enshrined in the Constitution, and represents the manifestation of the country's independence while serving to secure our national interests in view of dignity, wisdom and expediency.

In this respect, during the past year, the Ministry of Foreign Affairs of the Islamic Republic of Iran has employed all its specialized capabilities in coordination with other relevant domestic organizations and the Secretariat of the SCO to complete the legal and administrative process of full membership in the shortest possible time.

President Raisi's trip to Uzbekistan to participate in the Council of Heads of State of the Shanghai Cooperation Organization provides a pivotal opportunity to advance the Eurasian diplomacy of the Islamic Republic of Iran. Of course, the official visit to Uzbekistan and the signing of 19 important documents of cooperation, as well as visiting the historical city of Samarkand, the birthplace of Roudaki, the father of Persian poetry, will be considered as a memorable occasion for the Iranian delegation.