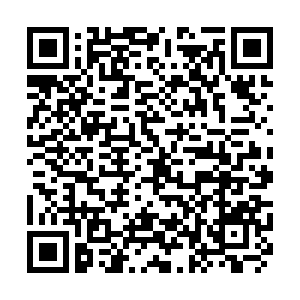 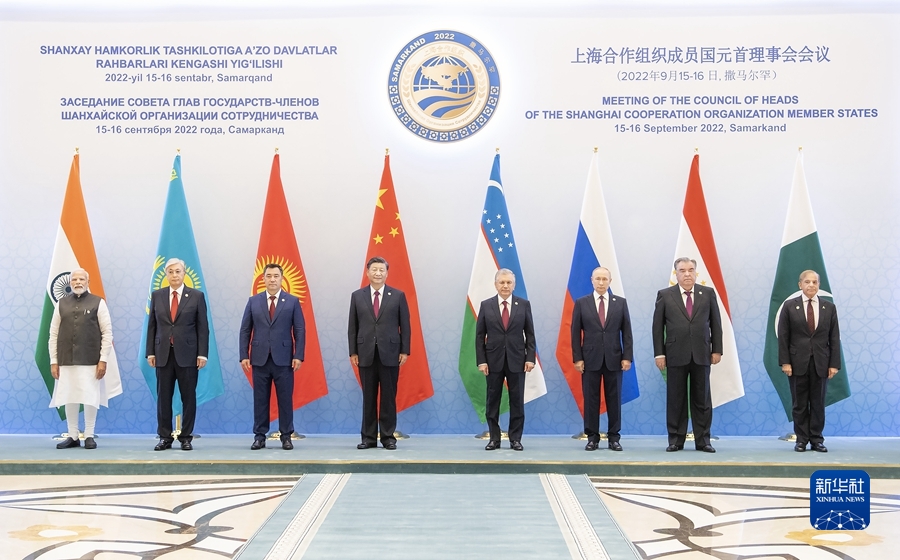 Leaders of Shanghai Cooperation Organization members states pose for a photo before the restricted session of the 22nd Meeting of the Council of Heads of State of the SCO in Samarkand, Uzbekistan, September 16, 2022. /Xinhua

Leaders of Shanghai Cooperation Organization members states pose for a photo before the restricted session of the 22nd Meeting of the Council of Heads of State of the SCO in Samarkand, Uzbekistan, September 16, 2022. /Xinhua

Chinese President Xi Jinping on Friday urged Shanghai Cooperation Organization (SCO) member states to keep the SCO on the right course, deepen cooperation in various fields, and continue to foster a favorable environment for the development and rejuvenation of member states.

Xi made the remarks when attending the restricted session of the 22nd Meeting of the Council of Heads of State of the SCO.

Since the founding of the SCO more than 20 years ago, it has upheld the Shanghai Spirit and succeeded in exploring a new path for the development of international organizations, Xi said, adding that there is much we can draw on from its rich practices.

Besides highlighting the importance of forging political trust, pursing win-win cooperation and treating each other as equals, Xi stressed in his speech that it is important to advocate openness and inclusiveness.

We stand for harmonious coexistence and mutual learning between different countries, nations and cultures, dialogue between civilizations and seeking common ground while shelving differences, said Xi, adding that, we are ready to establish partnership and develop win-win cooperation with other countries and international organizations that share our vision.

As the world nowadays faces more acute rivalry between two sets of policy choices - unity or division, cooperation or confrontation, Xi called on SCO member states to stay committed to the Shanghai Spirit and enhance solidarity and cooperation.

It is important that the SCO stay true to its founding mission, increase mutual trust, and join forces to cope with the complex changes in the external environment, said Xi, urging that member states need to continue to support each other on matters concerning each other's core interests and major concerns and serve as a strong backing for each other's development and rejuvenation. 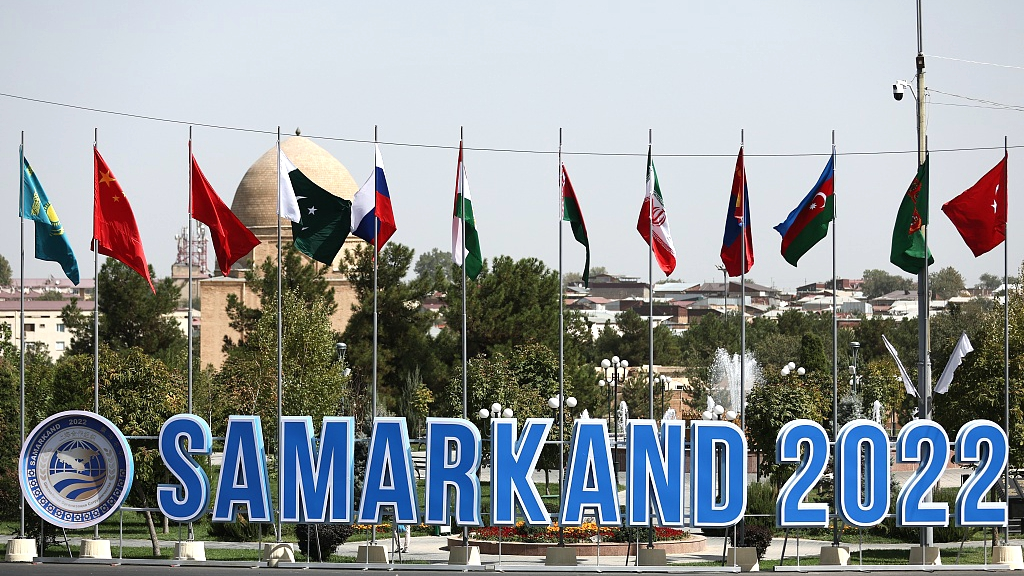 National flags fly in Samarkand, Uzbekistan, where the 22nd Meeting of the Council of Heads of State of the SCO is being held. /CFP

National flags fly in Samarkand, Uzbekistan, where the 22nd Meeting of the Council of Heads of State of the SCO is being held. /CFP

Member states need to advocate the vision of common, comprehensive, cooperative and sustainable security and reject any attempt to create bloc confrontation and damage regional stability, he said, adding that the SCO should enhance its law enforcement cooperation and prevent terrorist and extremist forces from jeopardizing regional security.

It's important for SCO member states to pursue inclusiveness and shared benefits in promoting development cooperation, he said.

Member states should actively promote trade and investment liberalization and facilitation, ensure the stable and smooth functioning of industrial and supply chains, and encourage the orderly flow of resources and factors of production, so as to realize greater economic integration and development in the region, said Xi.

They should redouble efforts to promote complementarity between the Belt and Road Initiative and other national development strategies and regional cooperation initiatives to stimulate the dynamism for growth in participating countries, Xi added.

Noting an increasing number of countries have applied to join the SCO family, Xi stressed the importance of advancing the SCO expansion process and strengthening SCO institutions.

The SCO should seize the opportunity and step up its work to expand the ranks of cooperation and augment the effective force for international equity and justice, said Xi.

Speaking of the upcoming 20th National Congress of the Communist Party of China, Xi said China will remain firm in its commitment to peaceful, open, cooperative and common development, and continue to see the SCO as a priority in its diplomacy.

China stands ready to draw on its own development to contribute to the development of countries in the region and to a better life for the people in the countries, Xi said.