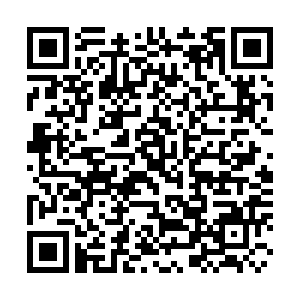 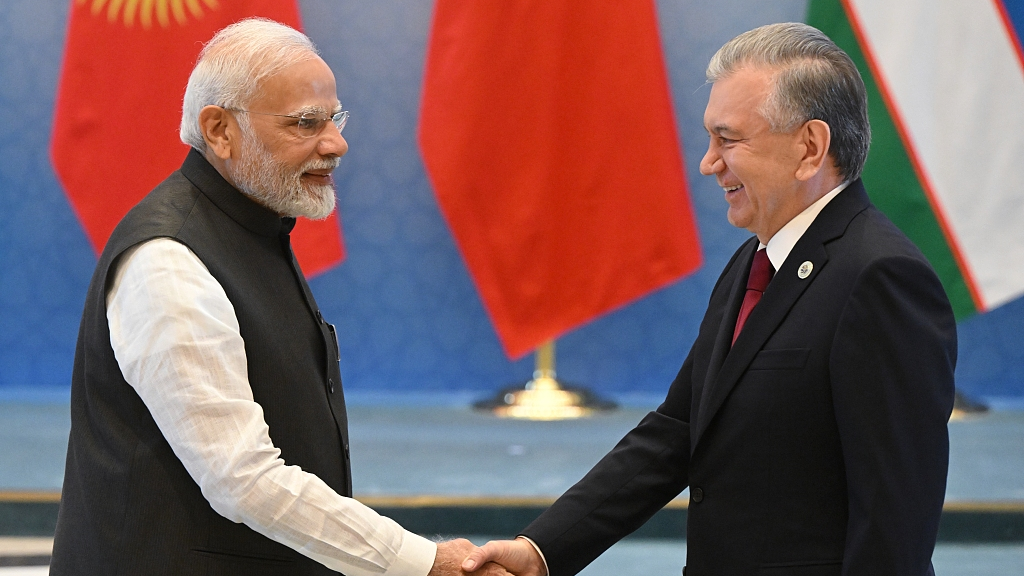 Indian Prime Minister Narendra Modi and Uzbek President Shavkat Mirziyoyev shake hands before a family photo at the 22nd Meeting of the Council of Heads of State of the Shanghai Cooperation Organization, in Samarkand, Uzbekistan, September 16, 2022. /CFP

Indian Prime Minister Narendra Modi and Uzbek President Shavkat Mirziyoyev shake hands before a family photo at the 22nd Meeting of the Council of Heads of State of the Shanghai Cooperation Organization, in Samarkand, Uzbekistan, September 16, 2022. /CFP

Editor's note: Ayanangsha Maitra is a foreign affairs correspondent for The New Indian and doctoral scholar. The article reflects the author's opinions and not necessarily the views of CGTN.

Known for her elegant past, majestic and idyllic setting coupled with intense cultural, civilizational, and economic links with rest of the world, Uzbek city of Samarkand convened the 22nd Summit of the Council of Heads of the Shanghai Cooperation Organization on September 15 and 16. The Beijing-headquartered SCO has Russia, China, India, Kazakhstan, Uzbekistan, Kyrgyzstan, Tajikistan, Pakistan and Iran as members and three observer members Afghanistan, Belarus and Mongolia. As the trans-regional international bloc SCO has turned 21, it has shown a gesture to expand herself inducting Western sanction-torn Iran as a member and accepting the fervid desire of Belarus for future consideration.

The SCO arranges two annual summits, one at the heads of state level and the other at the heads of government level. The Samarkand summit of 2022 is being watched and wrangled around the world for a variety of reasons. In the post-pandemic century, the high-level conclave has brought the issue of flow of economy on the table. It was the first in-person summit of the SCO since the outbreak of COVID-19.

Amid the war in Ukraine, the energy security and supply chain were top priority for the member states. Prime Minister Narendra Modi of India has stressed on role of the SCO in ensuring food security and especially cultivation, as well as consumption of millets. While in Samarkand, Chinese President Xi Jinping has vouched for a bonhomie among SCO nations. Together the assembled state leaders have come up with the Samarkand Declaration.

The attendance of state leaders in person including President Vladimir Putin of Russia, President Xi and Prime Minister Modi will boost their respective country's connections and engagements with the Eurasian geography. Prior to the 15th SCO summit in 2015 in Ufa, Russia, India was represented by the Minister of External Affairs Vijay Kumar Singh instead of the state leader. Participation of the head of the government, Prime Minister of India, reflects the organization's loftier status and its importance to India.

India is taking the baton of the SCO presidency from Uzbekistan for the year September 2022 to September 2023. Varanasi, an Indian historic town in Uttar Pradesh is the first Cultural and Tourism Capital of the SCO. Such an announcement may attract more flow of tourists from the SCO nations and strengthen people-to-people contact among the SCO fraternity. That's how arts and culture radiate and travel from origin to aesthetic estuary! 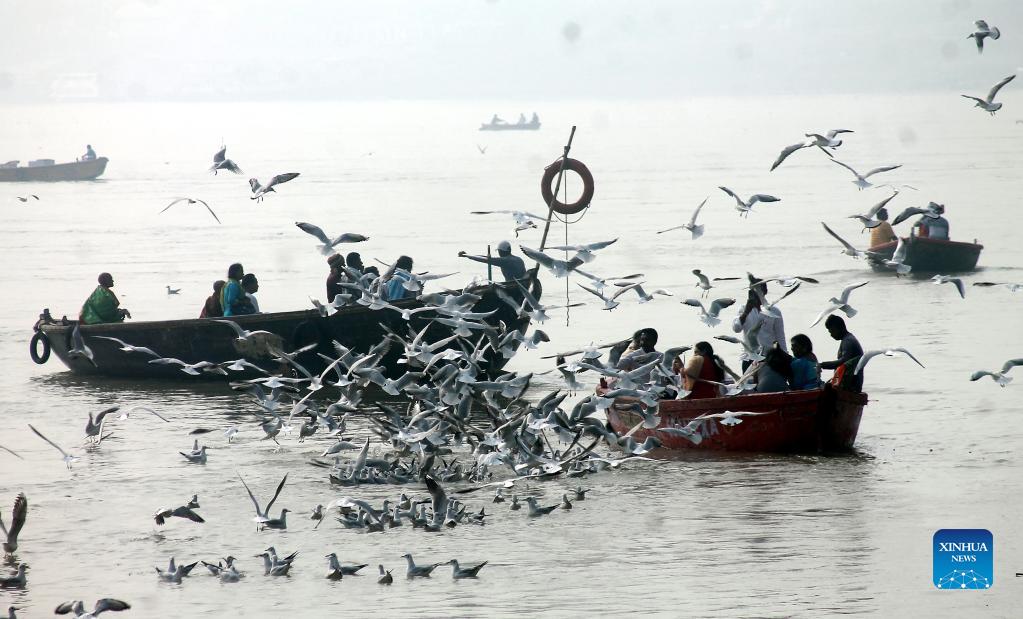 Central Asia is a reservoir of untapped energy resources. India can explore the opportunity to access Central Asia's minerals and energy, as well as market access to Russia and ultimately Europe. The club SCO presents India tremendous opportunities to engage with the Central Asian Republics Kazakhstan, Kyrgyzstan, Tajikistan and Uzbekistan. With Iran on board, India and other interested partners can find the route to prosperity through the International North-South Trade Corridor or Chabahar Portin Southeast Iran. Similarly, the China-Kyrgyzstan-Uzbekistan railway project is destined to change the lives in the Eurasian habitat.

The SCO, the evolving plurilateral forum may open a vista to the Indian enterprises for lucrative commercial opportunities. India's premier trade body, the Federation of Indian Chambers of Commerce and Industry, has represented India at the SCO Business Council earlier. The business bodies are slated to identify the interested companies and individuals in both sides. Through the SCO, India and China can spread their chains of traditional medicine. At the Samarkand SCO Summit, giving a reference to the WHO Global Center for Traditional Medicine in Gujarat, India, PM Modi urged the leaders of SCO states for setting up a SCO Working Group on Traditional Medicine.

Powered by a $3 trillion economy, India with her economic might and ambitious rise will utilize the SCO to archive an equilibrium in balancing the West and the East. Among the SCO members, there are shared interests. For example, Uzbek President Shavkat Mirziyoyev's goal of "Region First" is very similar to PM Modi's "Neighborhood First" policy.

Terrorism in the regions pricks and pains the triumvirate Beijing, Moscow and New Delhi frequently. The SCO Declaration of 2001 and the Charter of 2002 advocate greater cooperation in curbing terrorism, and extremism emanating from several frontiers. When the Islamist extremist frictions like ISIL, ISIL-K, and Al-Qaeda are spreading their tentacles, the SCO has greater responsibilities to assume. The Regional Anti-Terrorist Structure, one of the significant parts of SCO has earned trust, as well as credibility. Islamic-Sufi clergy in India, Afghanistan, and Central Asia should be vocal on de-radicalization in the Eurasian landscape.

Despite her exceedingly large geography and demography, China has eliminated absolute poverty over the past few years. The SCO members, especially the aspiring members in penurious condition, should find avenues toward prosperity through this organization. Poverty alleviation, bringing more citizens under universal healthcare and education should be a priority for the developing state members in the SCO. Ensuring the same values in neighbor Afghanistan, will be nothing but accountability for the SCO. Otherwise, a devastating ripple effect will hamper each nation in the club.

The SCO has evolved to be an intergovernmental organization for making and executing decisions. The forum, housing members of multi tongues and mosaic of interests should amend a few functions.

India earlier requested the SCO to make English an official language. Russia and Kazakhstan both have supported India's plea to make English a working language. At present, Russian and Mandarin are the official languages, despite states like India and Pakistan not fluent in either. To accomplish pride, the multilateral and multi-ethnic club should try to embrace more possibilities.

At a time when the South Asian Association for Regional Cooperation is dysfunctional, the SCO is successful to accommodate two arch-rival New Delhi and Islamabad in the same room. At the Samarkand SCO summit, President Putin and Belarusian President Alexander Lukashenko's suggestion to initiate a SCO Athletics body will not just warm up the chilling ties of member states but make SCO a healthy and full-functional body. Prime Minister Modi's proposal to set up a Special Working Group on Start-ups and Innovation will hatch a new breed of entrepreneurs and risk takers. The roar of the SCO is nothing but Asia's desire for a multi-polar world order and revolt against a hegemonic power.