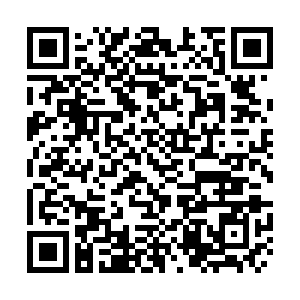 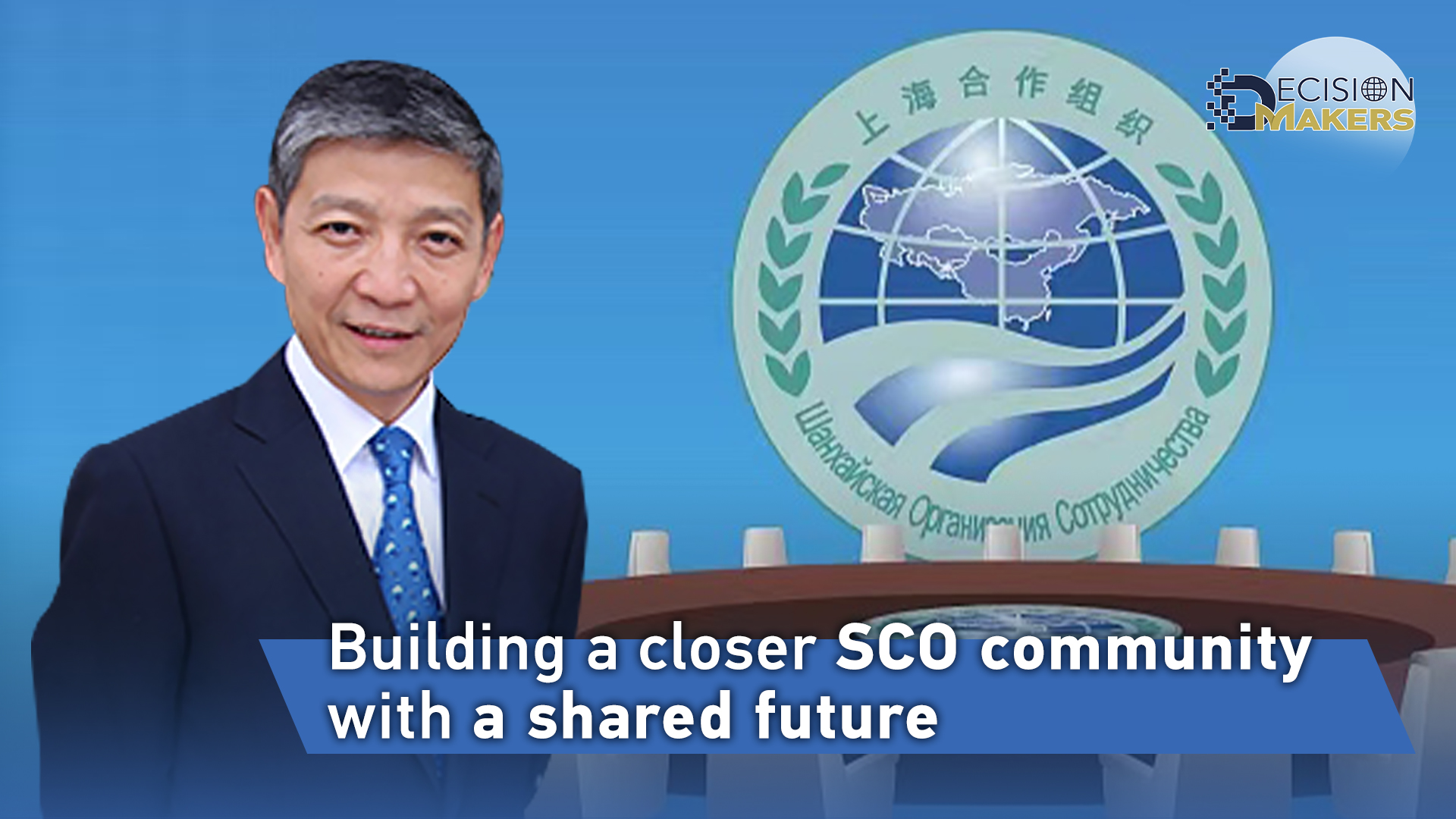 Editor's note: Decision Makers is a global platform for decision makers to share their insights on events shaping today's world. Liao Liqiang is Chinese Ambassador to Egypt. The article reflects the author's opinions and not necessarily the views of CGTN.

On September 16, the 22nd meeting of the Council of Heads of State of the Shanghai Cooperation Organization (SCO) was held in Samarkand, the "Pearl of the Silk Road." The SCO member states, leaders of observer countries, guests of the presidency and representatives of regional and international organizations attended the meeting. Chinese President Xi Jinping attended the meeting and delivered an important speech.

This year marks the 20th anniversary of the signing of the SCO Charter, and the 15th anniversary of the signing of the Treaty on Long-term Good Neighborliness, Friendship and Cooperation between the SCO Member States. Since its establishment in 2001, the Shanghai Cooperation Organization has carried forward the Shanghai Spirit featuring mutual trust, mutual benefit, equality, consultation, respect for the diversity of civilizations and pursuit of common development, and developed to be the world's largest and most populous comprehensive regional organization with important influence and authority. It has played an active role in and made contributions to Eurasian and international affairs.

Meanwhile, today's world has witnessed the rising challenges of unity vs division and cooperation vs confrontation. The SCO is faced with various tests in safeguarding regional peace and security. Its member states face serious challenges in upholding their own security and stability. Bearing in mind the new circumstances, tasks and difficulties facing the SCO and its member states, President Xi Jinping delivered an important speech at the Samarkand Summit. The speech focuses on the importance of this milestone year to the SCO in the course of its development, provides insights and guidance on the future of the SCO from a strategic and overall perspective, and puts forward major initiatives and proposals on greater unity among the member states and the future development of the SCO.

President Xi Jinping gave an insightful review of the success of the SCO, attributing it to the organization's commitment to political trust, mutually beneficial cooperation, equality, openness and inclusiveness, and equity and justice, and said these five points fully embody the "Shanghai Spirit," which is the source of strength for the development of the SCO, and the fundamental guide that the SCO must continue to follow in the years to come.

As for the future development of the SCO, President Xi Jinping pointed out that under the new circumstances, the SCO, as an important constructive force in international and regional affairs, should keep itself well-positioned in the face of changing international dynamics, ride on the trend of the times, constantly enhance strategic independence, consolidate and deepen solidarity and cooperation and build a closer SCO community with a shared future. To this end, President Xi put forward five suggestions, emphasizing that we need to enhance mutual support, expand security cooperation, deepen practical cooperation, enhance people-to-people and cultural exchanges, and uphold multilateralism. These suggestions draw a road map for the progress of the SCO and a new blueprint for its cooperation.

With the joint efforts of President Xi Jinping and the leaders of the participating countries, the Samarkand Summit has become the summit with the largest number of leaders and the richest outcome documents in the history of the SCO. The summit adopted over 40 outcome documents covering economy, finance, technology, culture, institution-building, external exchanges and so on. 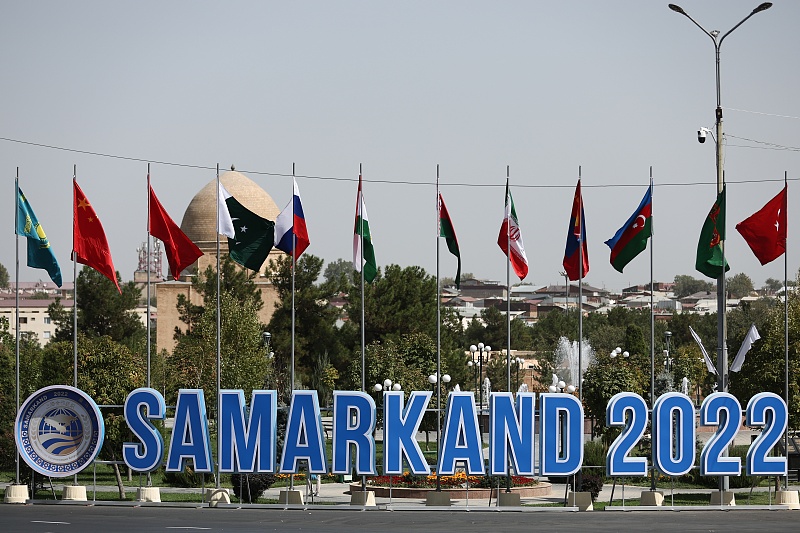 National flags fly in the city's center ahead of the 22nd Summit of the Council of Heads of State of the Shanghai Cooperation Organization, Samarkand, Uzbekistan, September 15, 2022. /CFP

National flags fly in the city's center ahead of the 22nd Summit of the Council of Heads of State of the Shanghai Cooperation Organization, Samarkand, Uzbekistan, September 15, 2022. /CFP

Particularly, under the initiative of the Chinese side, heads of state of the SCO member states adopted four major statements on international energy and food security, tackling climate change, and keeping supply chains secure, stable and diversified. The Chinese side also announced that it is ready to establish a China-SCO base for training counter-terrorism personnel, host a forum on industrial and supply chains, set up a China-SCO Big Data Cooperation Center, and provide developing countries in need with emergency humanitarian assistance of grain and other supplies worth 1.5 billion yuan. These tangible measures meet the needs of various countries, and show that China has not only presented the Global Development Initiative and the Global Security Initiative, but also carried out the initiatives with real actions.

It is particularly noteworthy that before the summit, an increasing number of countries had applied for joining the SCO. China and other member states of the SCO together adopted a holistic approach to these applications and conducted equal-footed consultations. At the summit, the SCO accepted Iran as a member state, supported the starting of the procedure for the accession of Belarus, granted Egypt, Saudi Arabia, and Qatar the status of SCO dialogue partners, and reached agreement on admitting Bahrain, the Maldives, the UAE, Kuwait and Myanmar as new dialogue partners.

This is a new and the largest round of expansion for the SCO. It helps consolidate the standing and influence of the SCO as an organization for regional cooperation with the largest population and the largest landmass in the world, and demonstrates once again the dynamism, ability to unite, and appeal of the Shanghai Spirit. The expansion also fully shows that the SCO is not an isolated and exclusive "small circle," but an open and inclusive "big family." The SCO, as a new type of international organization consisting of 26 countries, has shown stronger vitality and more promising prospects.

Egypt is a major Arab, African, Islamic and developing country and plays an important role in regional and international affairs. The Chinese side welcomes and congratulates Egypt on joining the "big family" of the SCO, and is willing to cooperate with Egypt in various fields within the framework of the SCO.

China is willing to work with relevant countries, including Egypt, to vigorously promote the "Shanghai Spirit,", continuously strengthen strategic independence, consolidate and deepen solidarity and cooperation, and promote the building of a closer SCO community with a shared future. It will inject more positive energy and new impetus into safeguarding peace and prosperity of the Eurasian continent and the world, and play an exemplary role in promoting the building of a new type of international relations and a community with a shared future for mankind.