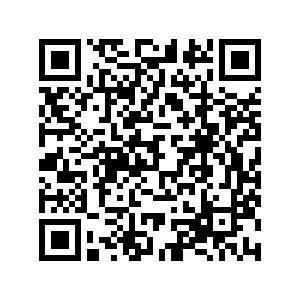 Three years after walking free from prison, Lula is making a strong comeback in Brazilian politics.

In less than two weeks before the country's general election scheduled on October 2, the former leftist president reached 47 percent of voters' support against 31 percent for his main rival, incumbent President Jair Bolsonaro in the latest poll released on Monday by IPEC, formerly known as IBOPE.

With Lula pulling ahead in the polls, Brazil could become the latest Latin American country to shift to the political left, following recent elections in Colombia, Chile, Honduras and others.

The 76-year-old former president owes part of his success to Bolsonaro's unpopularity, but also to his ability to stitch together a diverse electorate coalition, according to Matthew Richmond, research fellow focused on Brazilian politics at the London School of Economics.

Lula left office in 2011 with record approval ratings and his Worker's Party (PT) continues to maintain a loyal base of about a quarter of the electorate.

"He goes beyond this to reach a broader population, especially among low-income voters, many of whom see him as one of them. But in this election, Lula's moderate messaging is also allowing him to reach parts of the middle class who opposed the PT in previous elections," Richmond wrote in an email to CGTN.

In Brazil, if no candidate gets more than 50% of the total vote, it triggers a head-to-head competition between the two frontrunners, almost certainly this year Bolsonaro and Lula. Right now, the big question is whether Lula can amass enough votes and take the election in the first round or would the election move to run-off on October 30, in which Lula would likely to win with a "comfortable margin," Richmond explains. 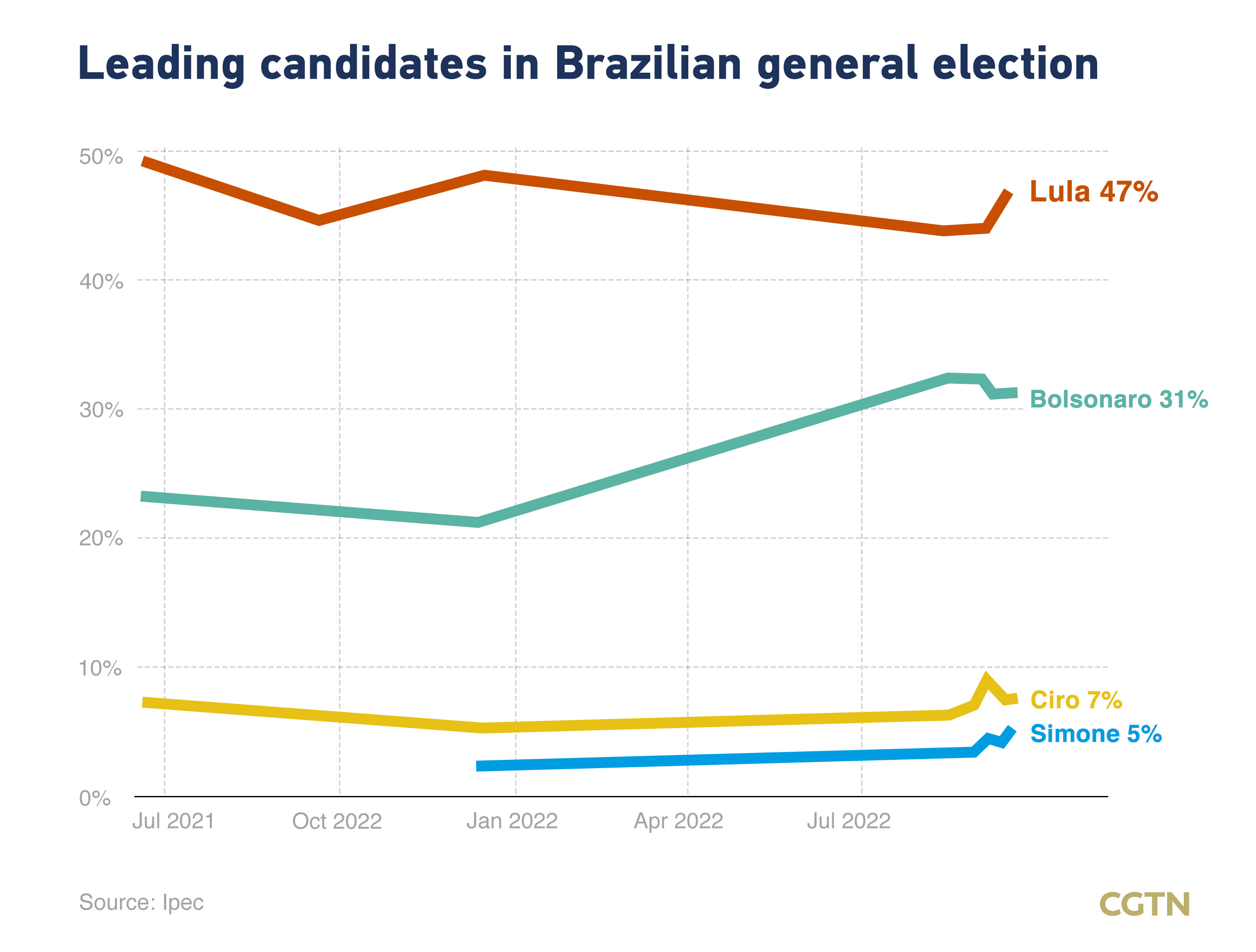 From rags to power

In 1945, Luiz Inácio Lula da Silva was born to a family of dirt farmers and didn't know what bread was until he turned seven. In that same year, he climbed onto the back of a flatbed truck with his family and the little they possessed for a life in the slums of São Paulo thousands of miles away.

As a child, he dropped out of primary school and worked various jobs, from shining shoes to selling peanuts on the street for a living. Later, he lost his little finger at a lathe while working the graveyard shift in an auto-parts plant. After the accident, Lula had to run to several hospitals before receiving medical attention. The experience motivated him to join the Worker's Union and later founded the Worker's Party – a platform that eventually propelled him to Brazil's presidency.

During his two terms as president, he introduced sweeping social programs such as Bolsa Familia that effectively combated the country's deep poverty.

The leftist leader also raised Brazil's international reputation through involvement in negotiations related to climate change, the Iran nuclear program and joining the BRICS group. These accomplishments made Lula one of the most popular politicians in Brazilian history and even the world at the time, according to Newsweek magazine.

Yet, the glory of his various political achievements came to a halt in 2017 when he was convicted on charges of corruption and money laundering in a controversial trial. Lula received a sentence of nine and half years that later was increased to 12. The investigation was proved to be politically motivated and he was released after spending 580 days in prison.

Experts have pointed to the chaotic management of COVID-19 being responsible for Brazil's troubled economy in recent years.

More than one third of Brazilian families are dealing with food insecurity, according to a study published in May by the Getulio Vargas Foundation (FGV), a Brazilian academic institution. The number of Brazilians facing severe food insecurity nearly doubled between 2018 and 2020, to 19.1 million, or almost 10% of the population, the same level as nearly two decades ago when Lula first became president, according to a report titled Olhe para a Fome (Look at Hunger) produced by several organizations including Oxfam Brazil. 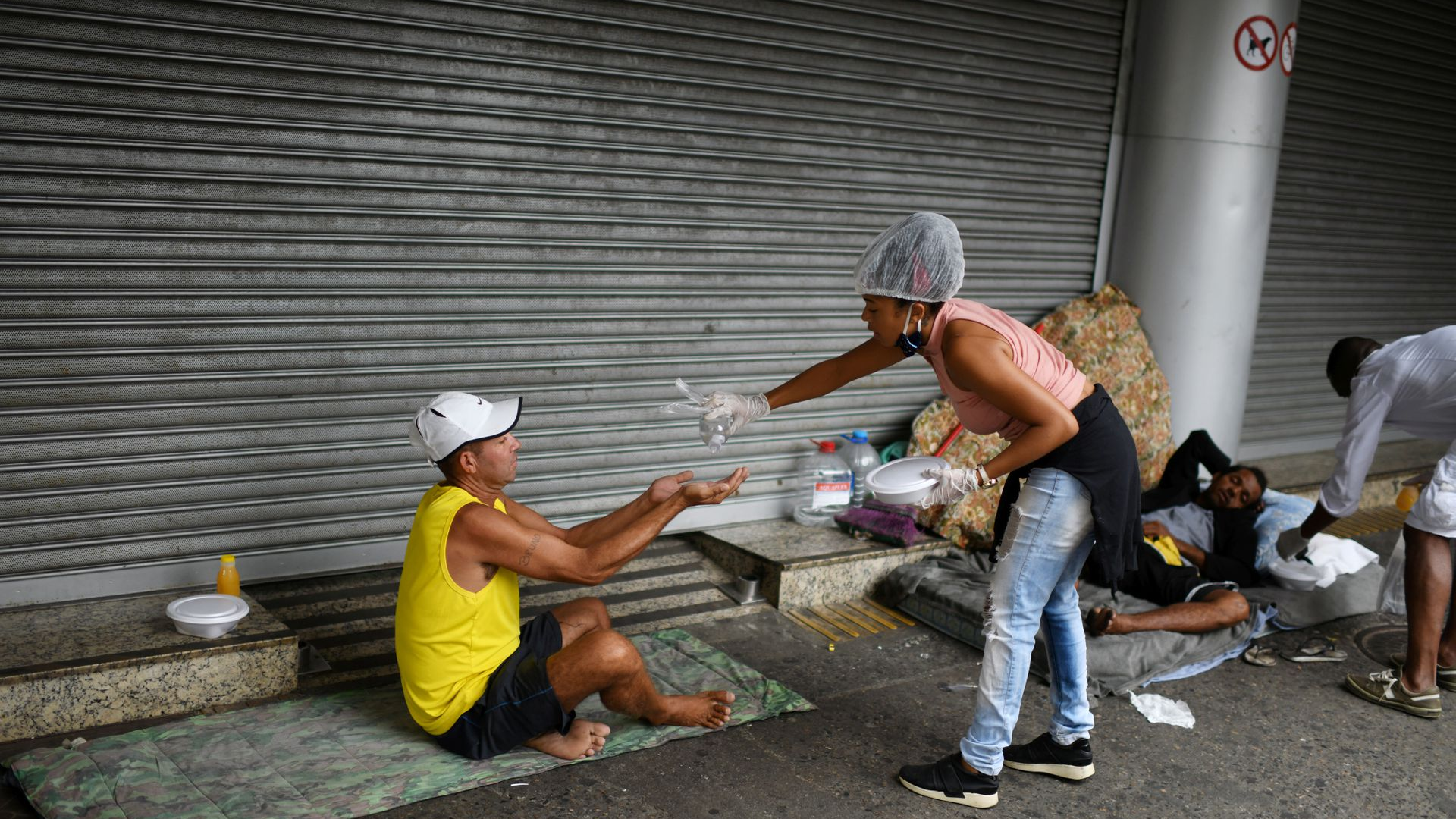 A member of a group of residents of the Chapeu Mangueira slum, sprays alcohol on the hand of a homeless person as she delivers him food during the coronavirus disease (COVID-19) outbreak, at Copacabana beach in Rio de Janeiro, Brazil, April 11, 2020. /Reuters

A member of a group of residents of the Chapeu Mangueira slum, sprays alcohol on the hand of a homeless person as she delivers him food during the coronavirus disease (COVID-19) outbreak, at Copacabana beach in Rio de Janeiro, Brazil, April 11, 2020. /Reuters

Increasing social inequality in education, health, environment and other areas, have pushed Brazilians to opposite ends of the political spectrum. The sharp contrast between this year's high concentration of support around the two leading candidates reflects the trend of increasing polarization between left and right that has gripped this particular election.

"It is important to highlight that the situation in Brazil is not a sub-product or an immature version of what is happening on the global stage," said Dário Souza e Silva, sociologist and political analyst at Rio de Janeiro's State University.

"We are experiencing what is going on in the rest of the world. What we need to do is give an original response and choose what kind of society we desire."