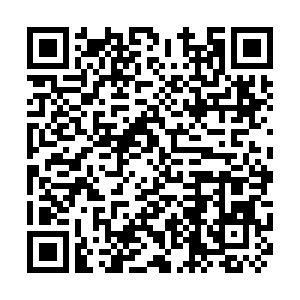 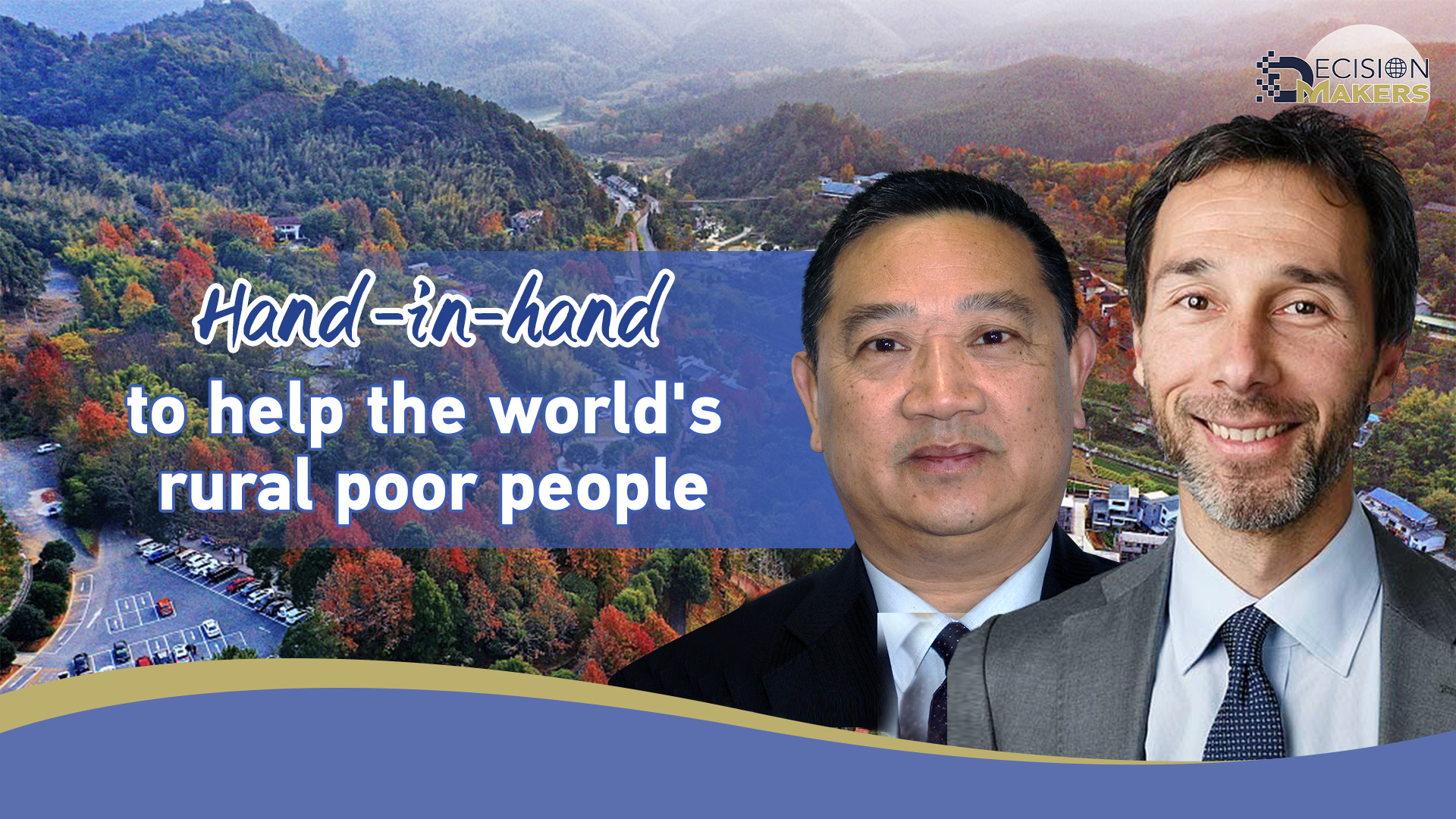 Editor's note: Decision Makers is a global platform for decision makers to share their insights on events shaping today's world. Tian Ya is the Regional South-South and Triangular Cooperation Manager for the International Fund for Agricultural Development (IFAD)'s Asia and the Pacific Division. Matteo Marchisio is the country representative of IFAD in China. The article reflects the authors' opinions and not necessarily the views of CGTN.

Back in mid-December 2019, a team of Chinese agricultural experts had arrived in Islamabad at the invitation of the International Fund for Agricultural Development (IFAD), an agency of the United Nations and an international financial institution. They came for a special knowledge exchange event on climate-resilient agriculture to share China's good practices and experience in tackling deforestation/desertification and water management – two areas that are highly relevant for Pakistani agriculture.

The Chinese experts' interactions with their Pakistani counterparts and government officials led to the formulation of concrete proposals for agro-technical cooperation, technical demonstrations and piloting, and sectoral policy support for smallholder agricultural development in Pakistan.

The initiative was considered successful by many local practitioners, and was subsequently selected by the United Nations Office for South-South Cooperation as a good practice, and published in its 2020 publication entitled "Good Practices in South-South and Triangular Cooperation for Sustainable Development."

As IFAD and others have witnessed over the years, such an anecdote is merely one of numerous cases in which China has shared its development solutions with other developing countries, either bilaterally or through multilateral organizations like IFAD.

Indeed, the China-IFAD partnership over the last four decades has kept pace with the times and advanced significantly, evolving initially from a main focus on project-level interventions into comprehensive cooperation through which China contributes to global poverty reduction and sustainable development.

Poverty has remained a formidable challenge for human society since time immemorial. It is, however, only over recent decades that the world has seen tangible progress in the reduction of extreme poverty.

In 1990, for instance, about 36 percent of the world's population lived in extreme poverty; this was drastically reduced to 10 percent by 2015, the last pre-pandemic year for which comparable data is available. Such an impressive achievement wouldn't have been possible without the unparalleled level of international cooperation over the last 30 years or so in the fight against poverty, and for sustainable development at large.

The international community's commitment for sustainable development is fundamentally embodied in the United Nations' Agenda 2030 for Sustainable Development. The Agenda is key to the future of the world's poor people: The first two of the 17 Sustainable Development Goals (SDGs) to be achieved by 2030 – namely SDG 1 "no poverty" and SDG 2 "zero hunger"– are directly relevant to them.

Both SDG 1 and SDG 2 are also at the core of IFAD's mandate. Indeed, IFAD's establishment in 1977 was in itself an outcome of international cooperation and multilateralism. Over the years, the Fund has consistently targeted the root causes of rural poverty toward achieving long-term sustainable development results.

In fulfilling its mission of transforming rural economies and food systems, IFAD tackles "the last mile" of the development process and aims to reach the remotest rural areas so as to "leave no one behind." Its pro-poor investment has achieved remarkable impact, leading to an estimated increase in production for 15 million small-scale producers every year and value of sales for another 16 million, and significantly raising the income of some 20 million rural women and men.

In May 2021, IFAD was ranked first among 49 major bilateral and multilateral development agencies by the Quality of Official Development Assistance Report on quantitative indicators that matter most to development effectiveness and impact.

China joined IFAD in 1980, and the IFAD anti-poverty project portfolio in China has grown ever since as one of IFAD's largest among its developing member states. Aligned closely with the government's strategies for agricultural development and rural poverty reduction, the IFAD project portfolio in China has helped improve the livelihoods of more than 20 million rural women and men in poor and remote rural communities.

Moreover, China's projects have piloted many pro-poor innovations that have potential for sharing with and replicating in other developing countries. For example, the on-farm biogas technology introduced in south China's Guangxi Zhuang Autonomous Region by the IFAD-funded West Guangxi Poverty-Alleviation Project was later introduced and adopted in various African countries through IFAD-funded projects in those countries. Through project-level and other forms of collaboration, IFAD has had the opportunity to witness China's remarkable success in eradicating extreme poverty, which represents a great contribution to the global poverty reduction endeavors. 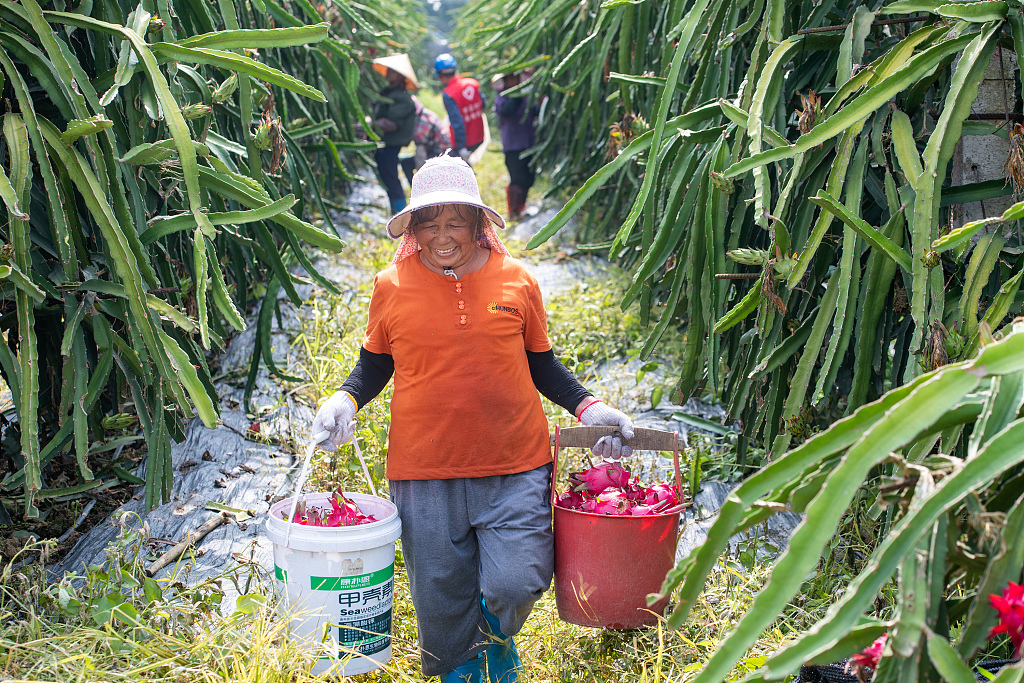 Over recent years, China has played an increasingly important role in strengthening IFAD's resource base and in enhancing the institutional governance of IFAD, while simultaneously promoting policy dialogue, knowledge management, South-South and Triangular Cooperation (SSTC), and human resource cooperation.

Taking the promotion of SSTC as an example, China was the first member country to set up in 2018 a dedicated SSTC Facility at IFAD with a contribution of $10 million, aimed at accelerating the exchange of expertise, knowledge and resources, and promotion of business-to-business links and investments across developing countries. The Facility has supported South-South Cooperation projects in more than 30 African, Asian and Latin American countries in collaboration with a diversified range of international and national institutions.

The "Climate Resilience Value Chain Best Practice Promotion" project led by the Vietnam Academy of Agricultural Sciences, with the participation of scientific research institutions from Cambodia, China and Laos, generated more than 30 best climate-resilient agricultural value chain practices and applicable technologies that have potential for scaling up in the Mekong sub-region. The China-IFAD SSTC Facility's experience will contribute to a greater mainstreaming of SSTC in IFAD's poverty reduction operations.

Meanwhile, China and IFAD have actively promoted the exchange and sharing of development experiences and solutions among developing countries with targeted initiatives. Between 2009 and 2018, China and IFAD jointly organized a South-South Cooperation seminar every year, for a total of more than 230 participants from 40 developing countries. In addition to training and capacity building, the seminars offered participants valuable opportunities to exchange practices and experiences in rural poverty alleviation, agricultural cooperation, comprehensive agricultural development, agricultural policy systems, and smallholder industry chains.

These and other innovative forms of joint work have demonstrated that the IFAD-China partnership may serve as a model for fruitful collaboration between IFAD and its developing member states toward sustainable development.

The COVID-19 pandemic has created unprecedented development challenges worldwide, with profound impacts that threaten to roll back years of development progress. At a time of radical global changes, IFAD, with support from partners like China, will endeavor to ensure the recovery, rebuilding and resilience of rural people's livelihoods. Only through working together can the international community help the world's poor people realize the dream of a life without poverty and hunger.