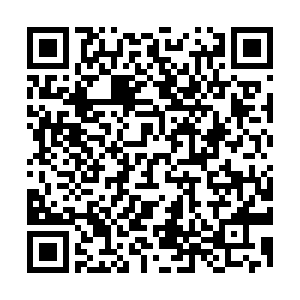 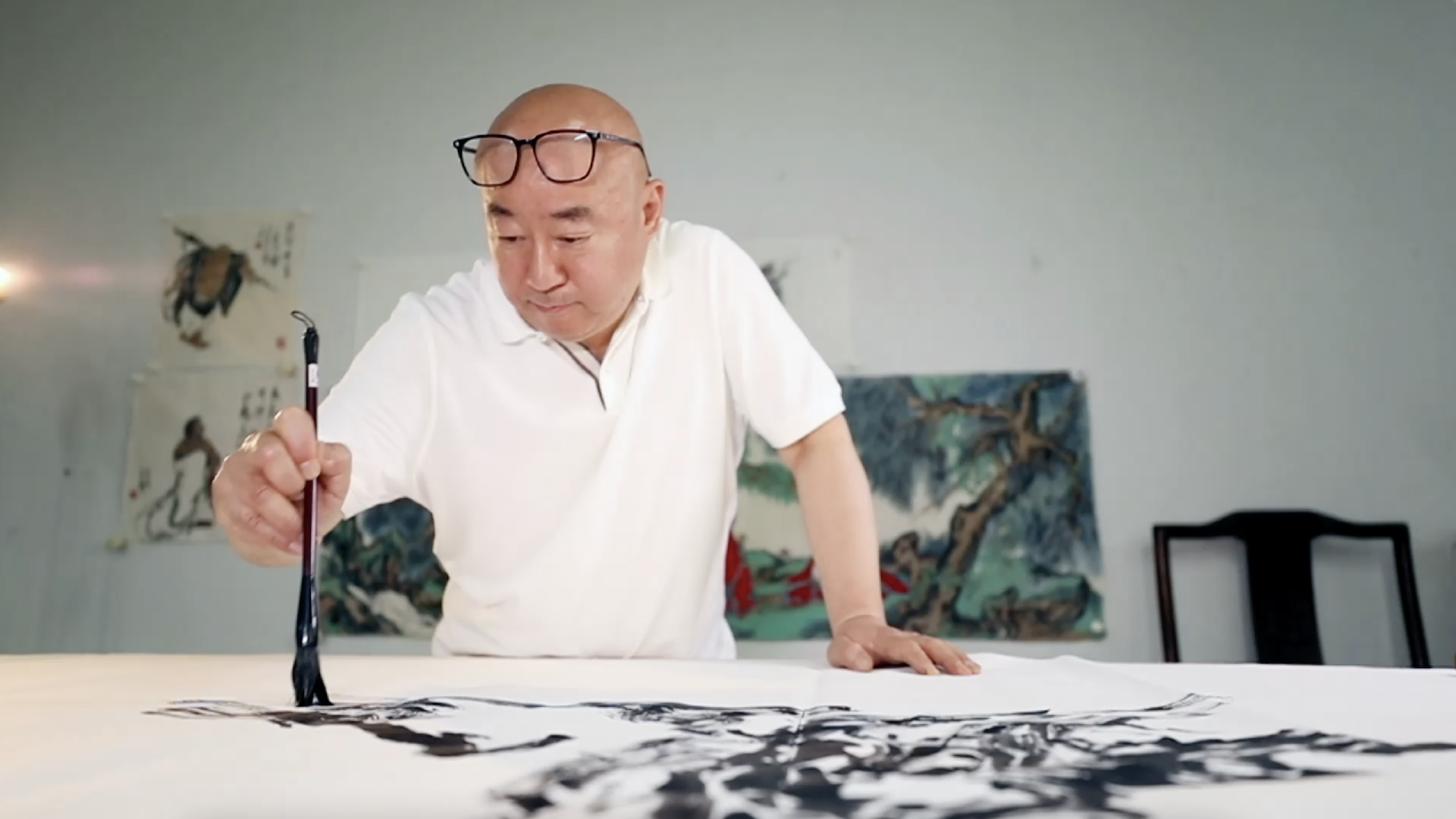 Fan Yang is one of the top contemporary Chinese painters majoring in landscapes. Over the past decades, he has used the traditional forms of Chinese painting to portray major historical events in the country, using his brush to record the sweeping changes.

He credits the guidance and support of his uncle Fan Zeng, a contemporary master of traditional Chinese painting, for his decision to embark on the road of fine arts.

Fan Yang grew up in Nantong of east China's Jiangsu Province, a city abundant in cultural riches dating back to ancient times. He hailed from a famous literary family, whose influence grounded in him a solid foundation and love of traditional culture and painting. 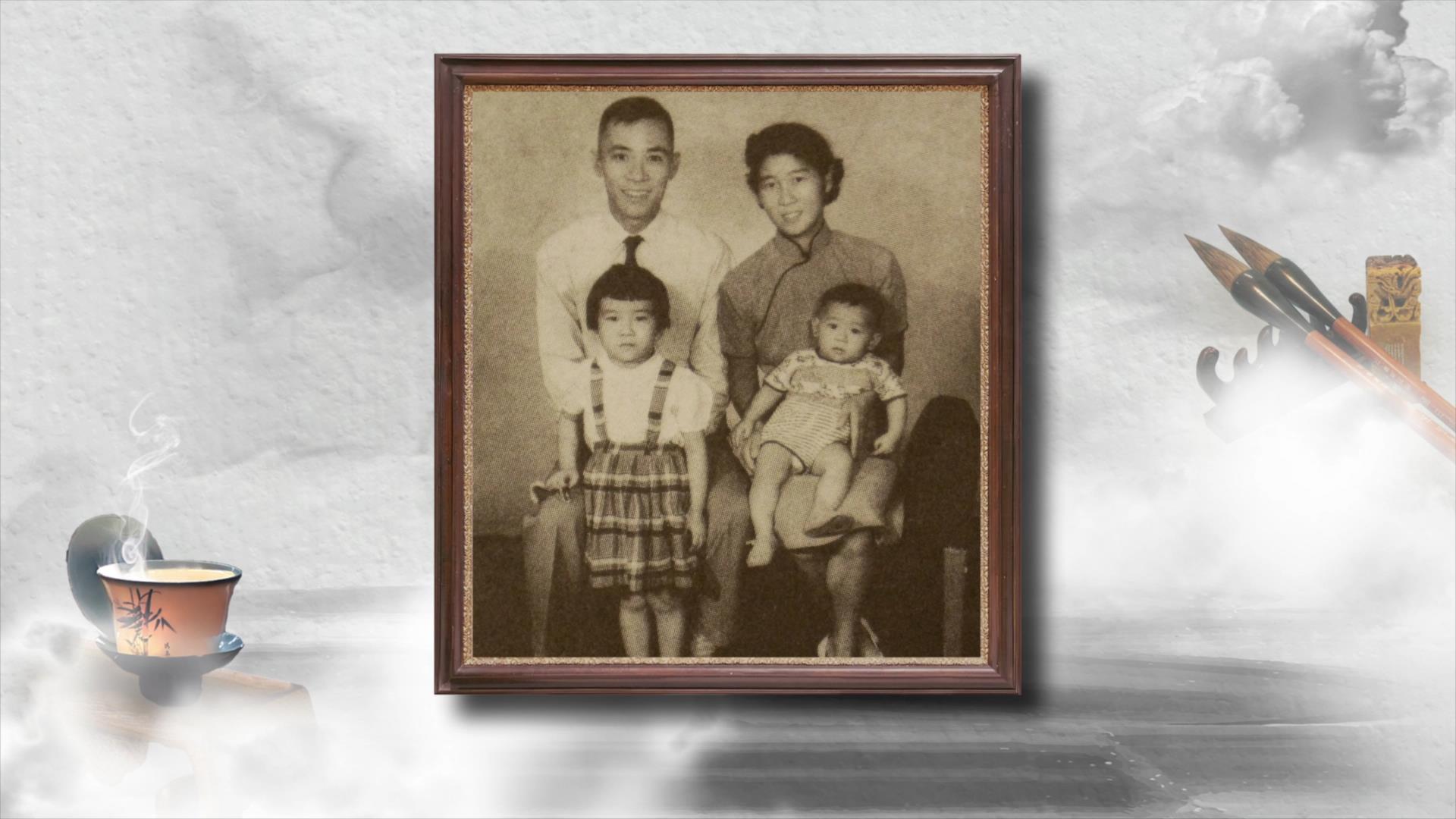 Fan Yang poses with his parents and sister for a family portrait. /CMG

Fan Yang poses with his parents and sister for a family portrait. /CMG

After graduating from high school, Fan gave up a stable job in a factory and chose to work at the Nantong Arts and Crafts Research Institute. He studiously applied himself to learning about folk art, which played a significant role in his future development.

In 1978, Fan Yang was admitted to the Art Department of Nanjing Normal University, a school with a 120 year history. Over the past century, it has cultivated many Chinese artists such as outstanding Chinese artist known for horse paintings, Xu Beihong (1895–1953), revolutionizing Chinese ink painting master, Fu Baoshi (1904-1965), pioneer of 20th-century Chinese oil painting Lyu Sibai (1905-1973) and China's famous painter, fine art historian and educator Qin Xuanfu (1906-1998) .

During his four years of college life, Fan absorbed the skills and knowledge of his predecessors before going on to form his own painting style. 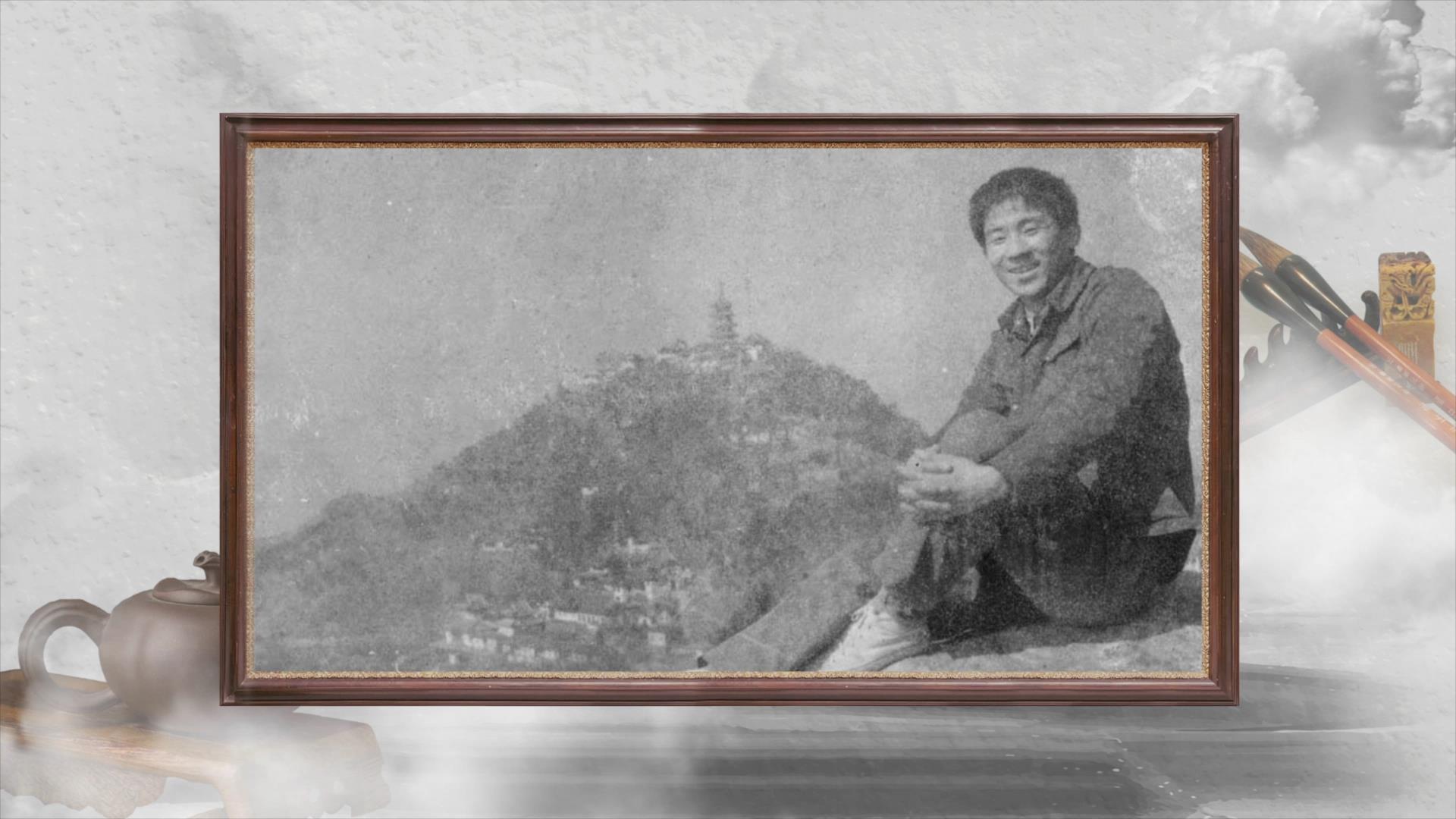 After many years of creative experimentation, Fan gained a strong reputation among contemporary Chinese painting circles.

Since one of his masterpieces, "Supporting the Frontline," claimed the Bronze Award at the 6th National Art Exhibition in 1984, his passion as an artist has remained undimmed for decades as he keeps exploring new themes and ideas. This medal-winning artwork depicts the Huaihai Battle, a decisive victory for the Communist Party of China at the end of the nation's civil war. 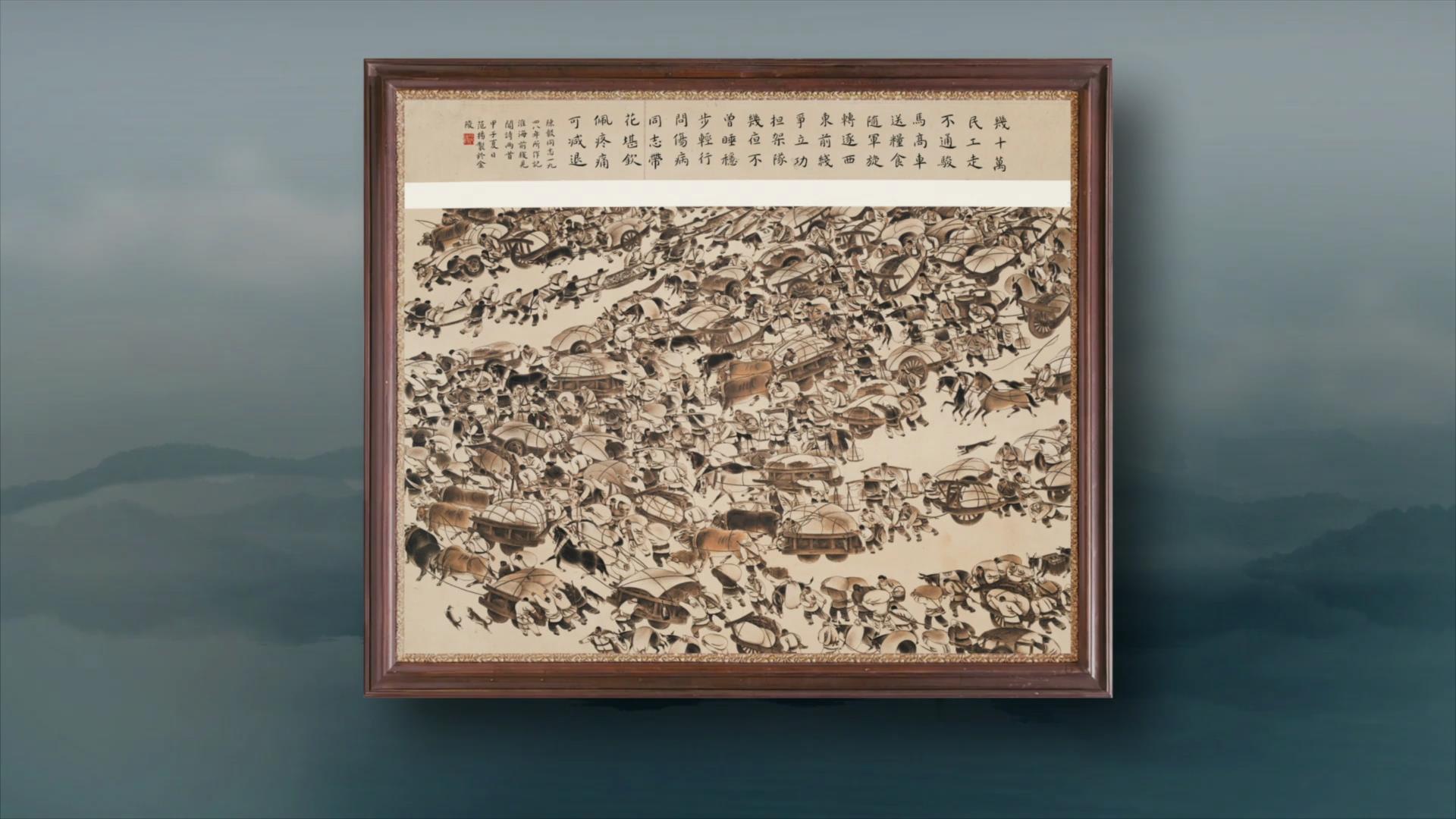 "Supporting the Frontline," a representative work of Fan Yang. /CMG

"Supporting the Frontline," a representative work of Fan Yang. /CMG

Fan Yang has created a wide variety of paintings. In addition to his landscape works, flower-and-bird paintings and depictions of people, he is also well versed in sketch art and calligraphy.

Fan's works have long been praised as precious possessions, a tribute to his outstanding skill at traditional Chinese painting and innovative ideas. For example, his landscape paintings inherit the tradition of rendering mountains and rivers from the Song (960-1279) and Yuan (1271-1368) dynasties while also inclining toward the aesthetic style of "thick pen and heavy ink."

Moreover, he does not restrict himself to the natural scenery or pastoral scenes but also likes to paint villages, towns and even cities.

In recent years, Fan has paid closer attention to subjects drawn from Chinese and world affairs.

He believes contemporary painters should create outstanding works in line with their era. And in his works, the diversity of forms and the inner unity of spirit are the distinctive features; all things flourish, compete with each other freely, and the world is brimming with color and vitality.

What's more, Fan has used his brushes to record the stories of the times. For example, after the Beijing 2022 Winter Olympics wrapped up, viewers could relive the crowning achievements of Team China and other inspiring stories that captured the Olympic spirit in the scores of artworks he produced about the Games. 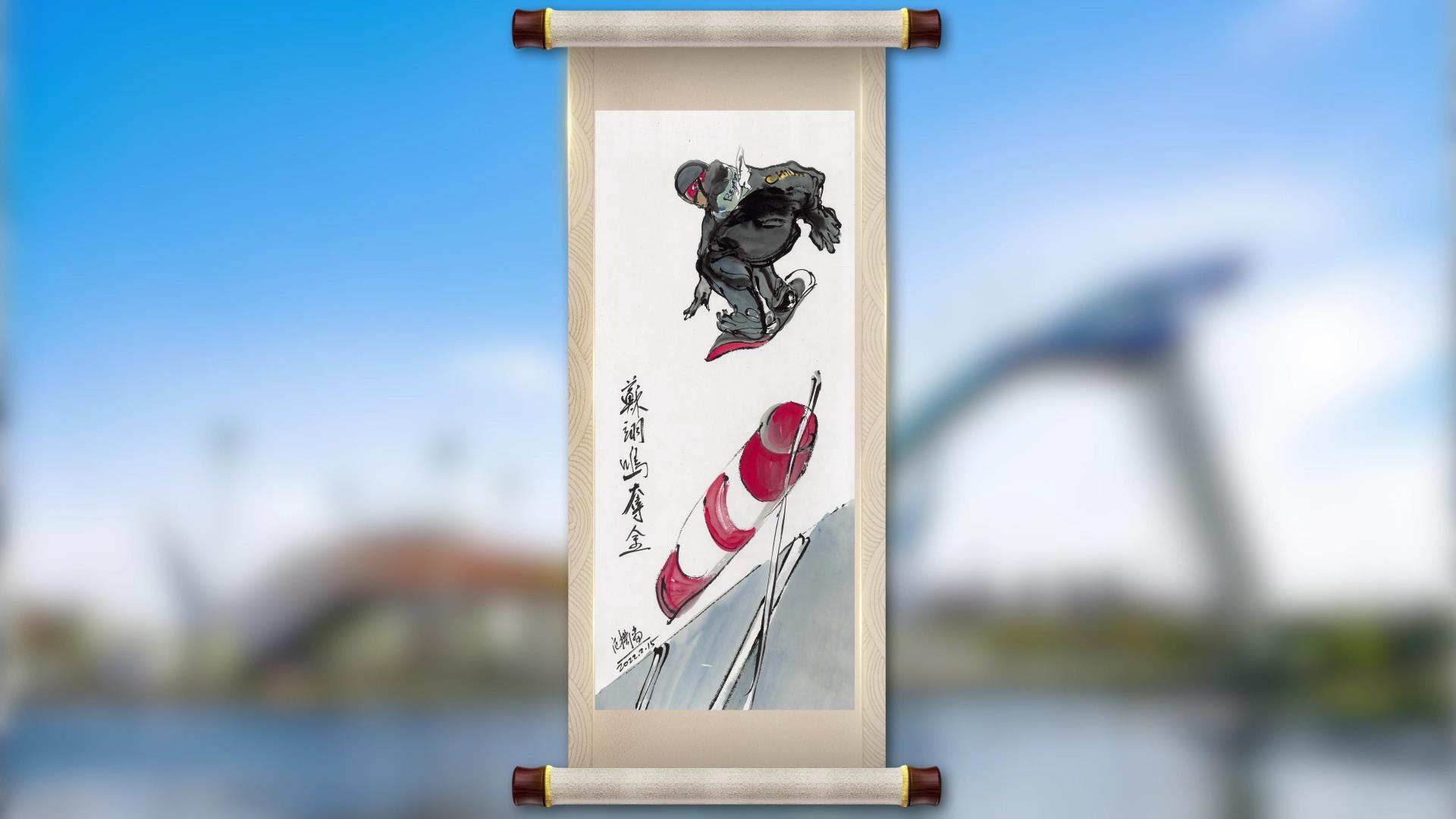 "The speed and sense of power required by Chinese brush and ink paintings reflect the spirit of the Olympics. Let audiences feel the excitement of the Olympic Games through my paintings and look forward to the (future) performances of the athletes," he said.