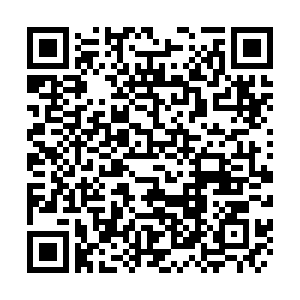 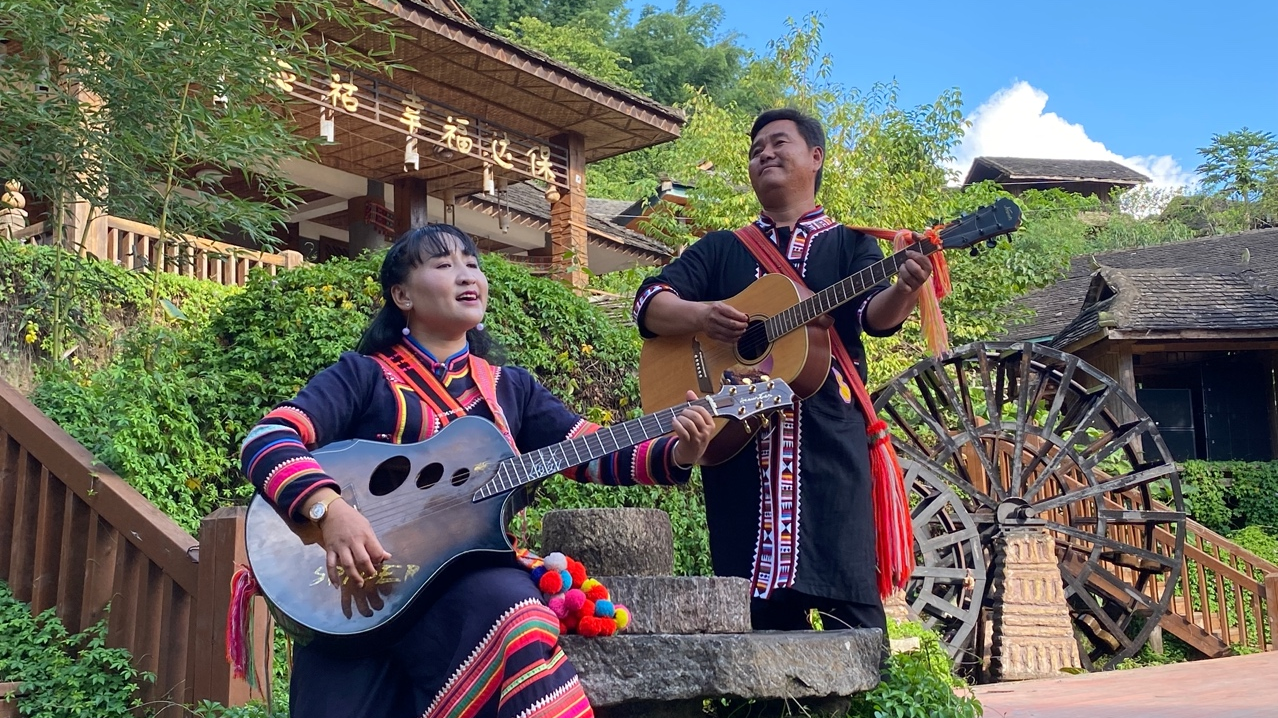 Li Naluo and her husband perform a song she writes in their village. Yang Jinghao/CGTN

Li Naluo and her husband perform a song she writes in their village. Yang Jinghao/CGTN

Performing their culture's songs and dances for visitors is an important part of the farmers' routine in Laodabao, a small village that's home to Lahu people in Lancang County, southwest China's Yunnan Province, bordering Myanmar in the west.

Many of the songs were created by 39-year-old Li Naluo, who has been dubbed a "lark" of the ethnic group. She told CGTN that her father taught her to play the guitar when she was 12. Five years later, she began to write songs in the Lahu language.

"I wrote happy songs when I was in a good mood, and some love songs when I was sad. We have some special festivals, and I've also created some for these occasions, including one for our Gourd Festival," said Li. 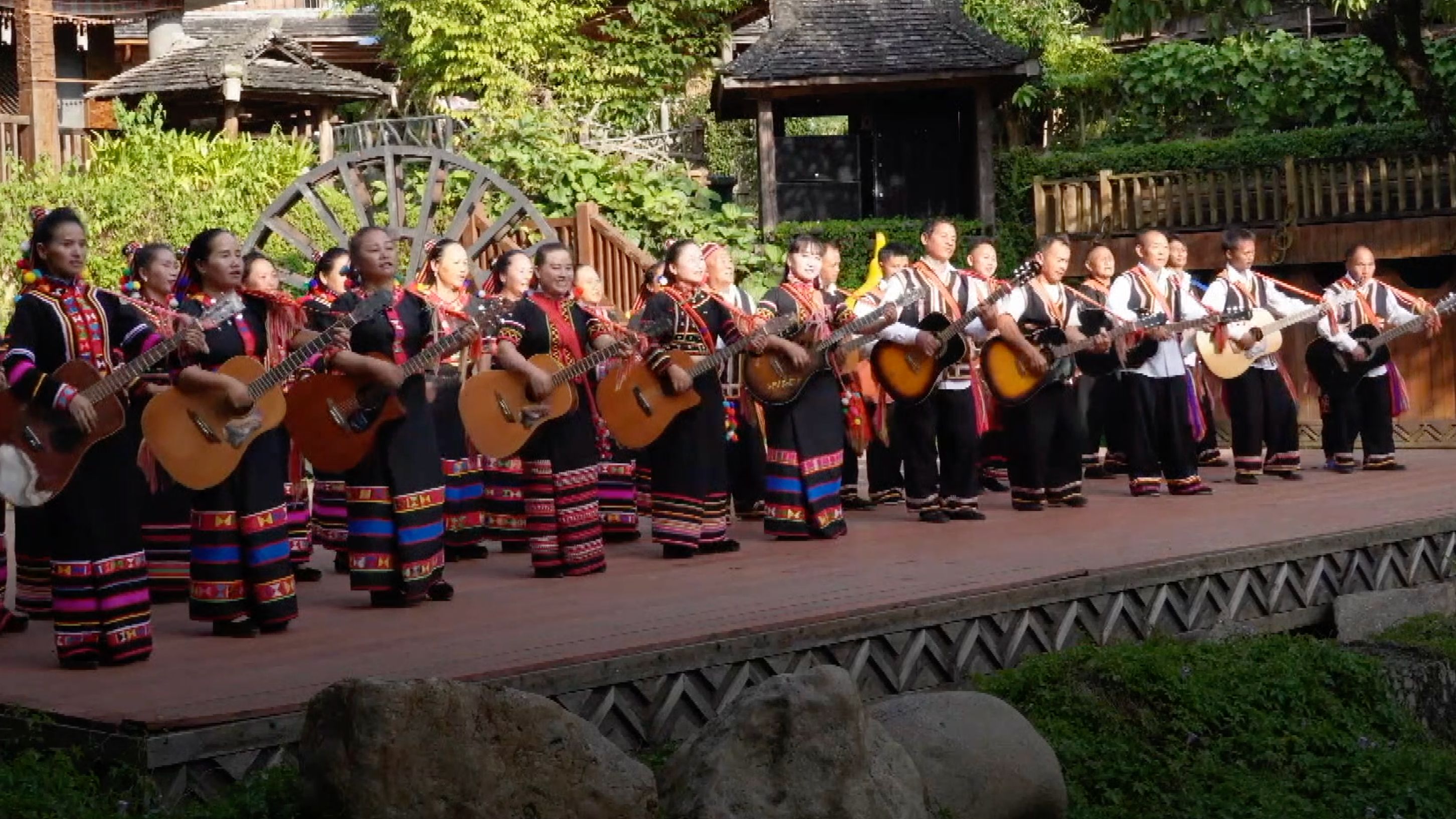 The Lahu used to be among the most underprivileged groups in China. In Li's memory, her village was once isolated and locals lived off traditional crops like rice and sugarcane.

"We all lived in thatched houses before. There were no roads leading to our village. Electricity and tap water were also inaccessible. It was difficult to make a trip to the urban area," she recalled.

But the hardships of life have never dented the farmers' passion for music. Li persisted with composing her own songs despite her limited education.

The song called "Happy Lahu," which was created by Li, has become a symbolic song of the group, and almost every one of the villagers can sing it. 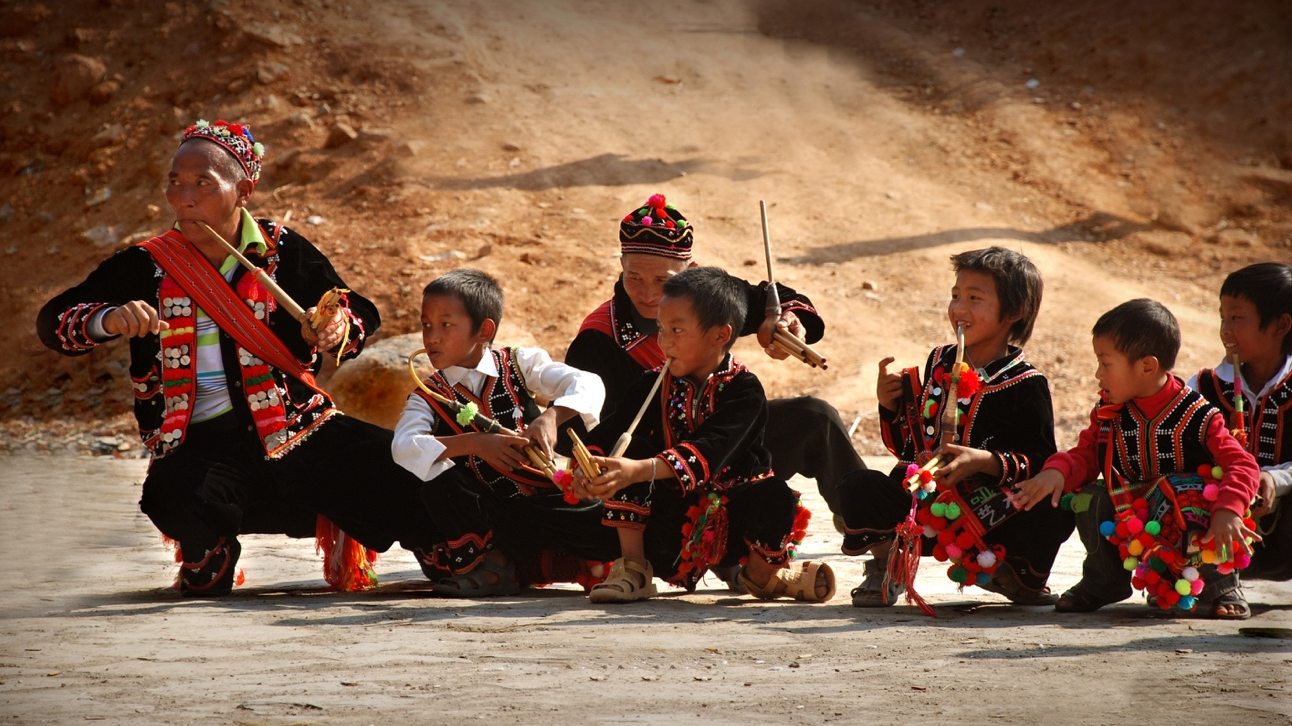 Some elderly villagers in Laodabao teach children to play the Lusheng, a kind of reed-pipe instrument played by the Lahu ethnic group. /Photo courtesy of Zhang Hua

Some elderly villagers in Laodabao teach children to play the Lusheng, a kind of reed-pipe instrument played by the Lahu ethnic group. /Photo courtesy of Zhang Hua

As the country's poverty alleviation drive was implemented, she decided to play an active part. In 2013, she took the lead to establish a performing arts company, engaging more than 200 villagers from children to those even in their 80s.

"Before we founded the performing arts company, we mainly did farm work, and sometimes performed outside," Li said.

"After that, more visitors came to our village, especially during holidays. We spent much time greeting them and showing our ethnic culture to them." 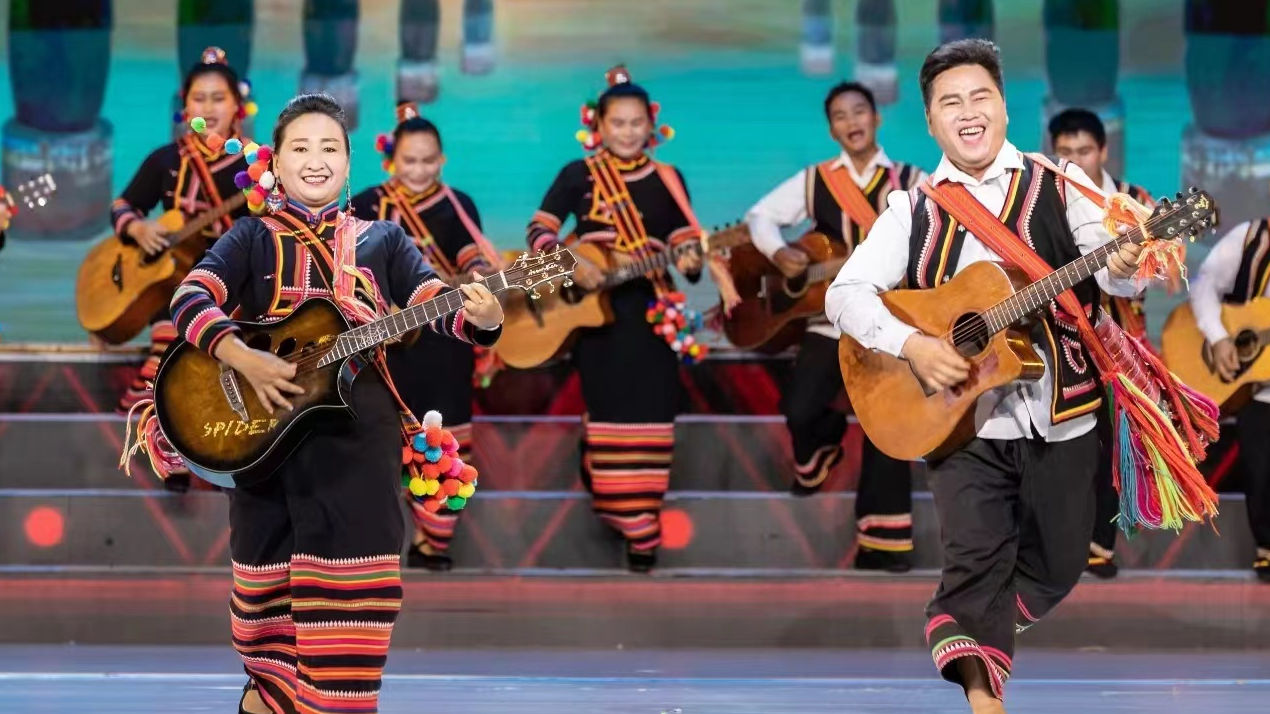 Li Naluo and her fellow villagers perform on stage in Beijing. /Photo courtesy of Li Naluo

Li Naluo and her fellow villagers perform on stage in Beijing. /Photo courtesy of Li Naluo

The villagers' hands aren't just skilled at farm work or weaving. They're also dexterous when it comes to playing the guitar, which they learned from each other.

Li shared a story. In 1984, her father Li Shikai sold a pig at 60 yuan ($8.3) and bought a guitar. That was how the villagers' bond with the Western-style instrument began. Today, most of them are good at it.

Developing their cultural performances turned out to be a rewarding undertaking. From an individual family income of at most 2,000 yuan (about $300) a year, performing helped increase each family's income tenfold.

They have even brought their vibrant performances from their small but lush village in Yunnan to grand, gala performances in the Chinese capital Beijing.

"I never thought that our life would get better through singing and dancing," said Li Zhasi, a local villager. 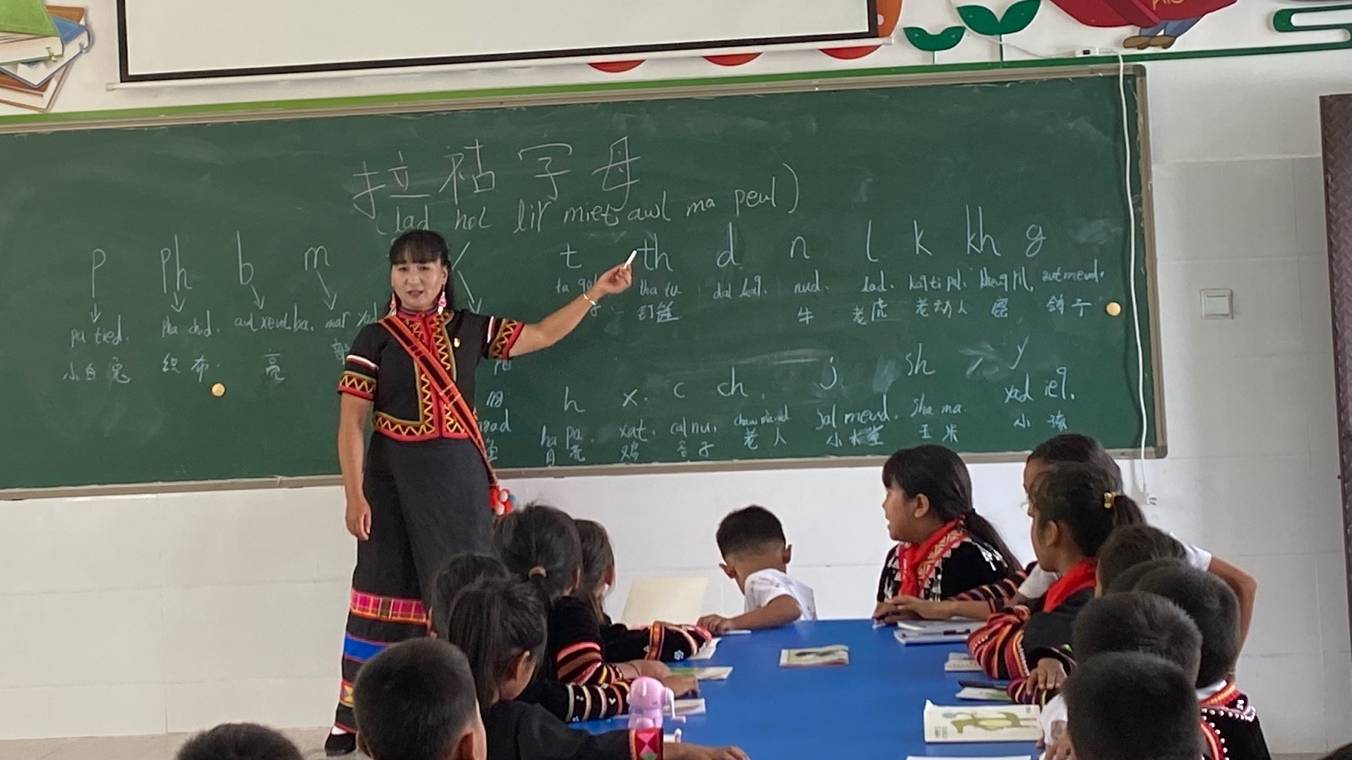 For the gifted grassroots musician, performing isn't just a way of making money. She also hopes the unique local culture can be preserved and passed on to future generations. To this end, she also teaches the Lahu language, music and culture at a nearby elementary school.

As a delegate to the 20th National Congress of the Communist Party of China (CPC), Li Naluo said she would bring forward two proposals on behalf of the Lahu people – further protection of their ancient traditions and villages, and their way of life.

"We have some inheritors of different intangible cultural heritage items, including three at the national level, so I want to establish a big training base for our ethnic culture," she said.

To diversify the source of income, she has set up a cooperative for their handicraft, where they mainly make Lahu ethnic costumes and some accessories.

"When there are orders, I would ask some elderly craftsmen to join. The cooperative has benefited more than 50 people so far," said Li.

Li also attended the 18th CPC National Congress in 2012. She said over the decade, her hometown has witnessed huge changes, but it's her dedication to explore paths towards prosperity both materially and culturally, which will never change.