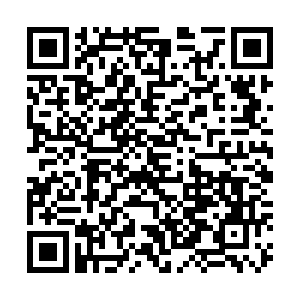 These are the six most frequently used words in the English-language version of the report to the 20th National Congress of the Communist Party of China (CPC), which assesses China's achievements and sets out the country's objectives and challenges over the coming five years.

The 25,000-word report goes into great depth, but the top six words offer a reasonable shorthand: the report charts a future for China whereby the people are at the center, the Party has a critical role, security is vital at all levels, and the governance and law-based systems will be strengthened to allow a new development philosophy to flourish. 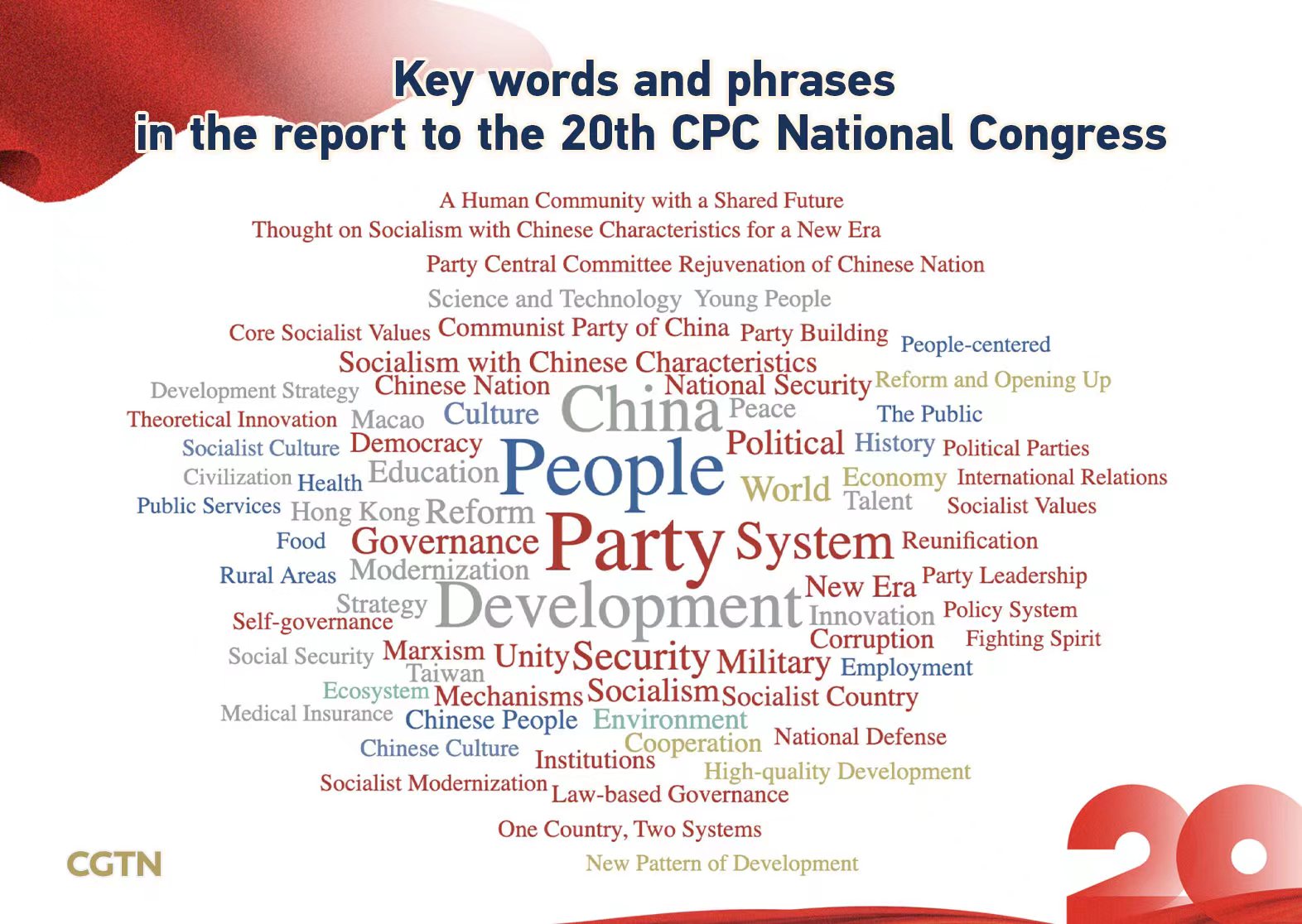 Having built a moderately prosperous society and eliminated absolute poverty, completing the first centenary goal, the Party is now working towards the "second centenary goal of building China into a great modern socialist country in all respects and to advance the rejuvenation of the Chinese nation on all fronts through a Chinese path to modernization."

We trawled the terms used in the report to discover the key emphases, identify new trends and assess what it indicated about China's next steps.

The report charts a roadmap for building a modern socialist China in all respects over the next five years and beyond, outlining measures to boost and share the proceeds of the country's economic development.

"Development" is a clear priority in various areas: from high-quality, sustainable and green development to people-centered, economic and social development, and the new development philosophy, it is the most used keyword in the document other than "Party" and "people."

The goal of achieving common prosperity – ensuring that everyone receives a fair share of China's economic success – also features in the report. Reducing inequality is a key part of the agenda for the next five years, and a variety of policy solutions are advocated.

"We will continue to improve the system of income distribution, implement the employment-first strategy, improve the social security system, and advance the Healthy China Initiative," the report reads, adding that part of the goal over the coming years is to "ensure personal income grows basically in step with economic growth and pay rises in tandem with increases in productivity." 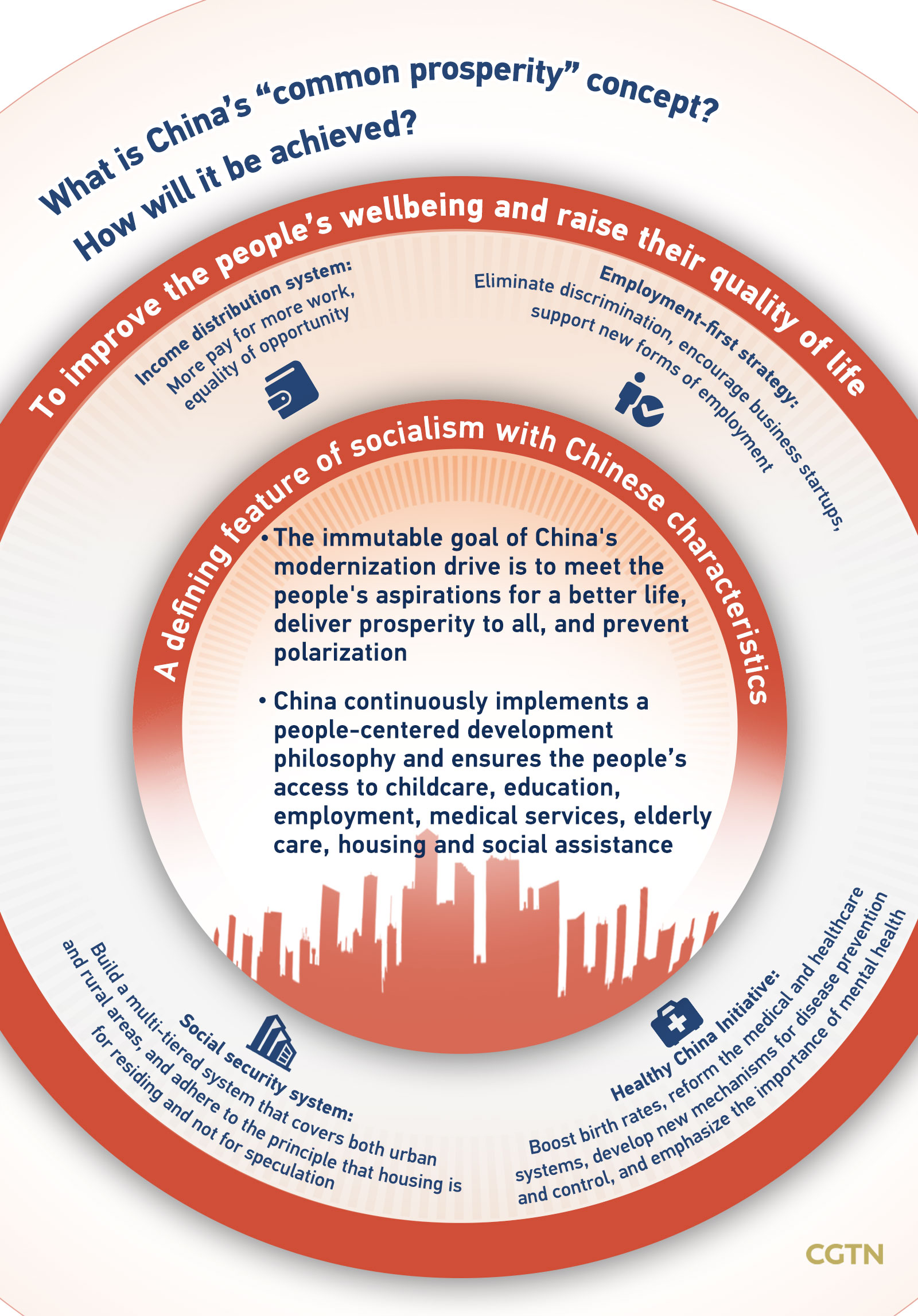 The report also runs through some of the areas in which China leads the world: forex reserves, trade in goods, grain output, manufacturing output and number of research and development (R&D) personnel – and notes that China's GDP now makes up 18.5 percent of the global total.

Given the focus on innovative growth, the report, which stresses the need to build China's "self-reliance and strength in science and technology," also notes the huge increase in spending on R&D between 2012 and 2021, with the total spend up from 1 trillion yuan ($140 billion) to 2.8 trillion yuan. 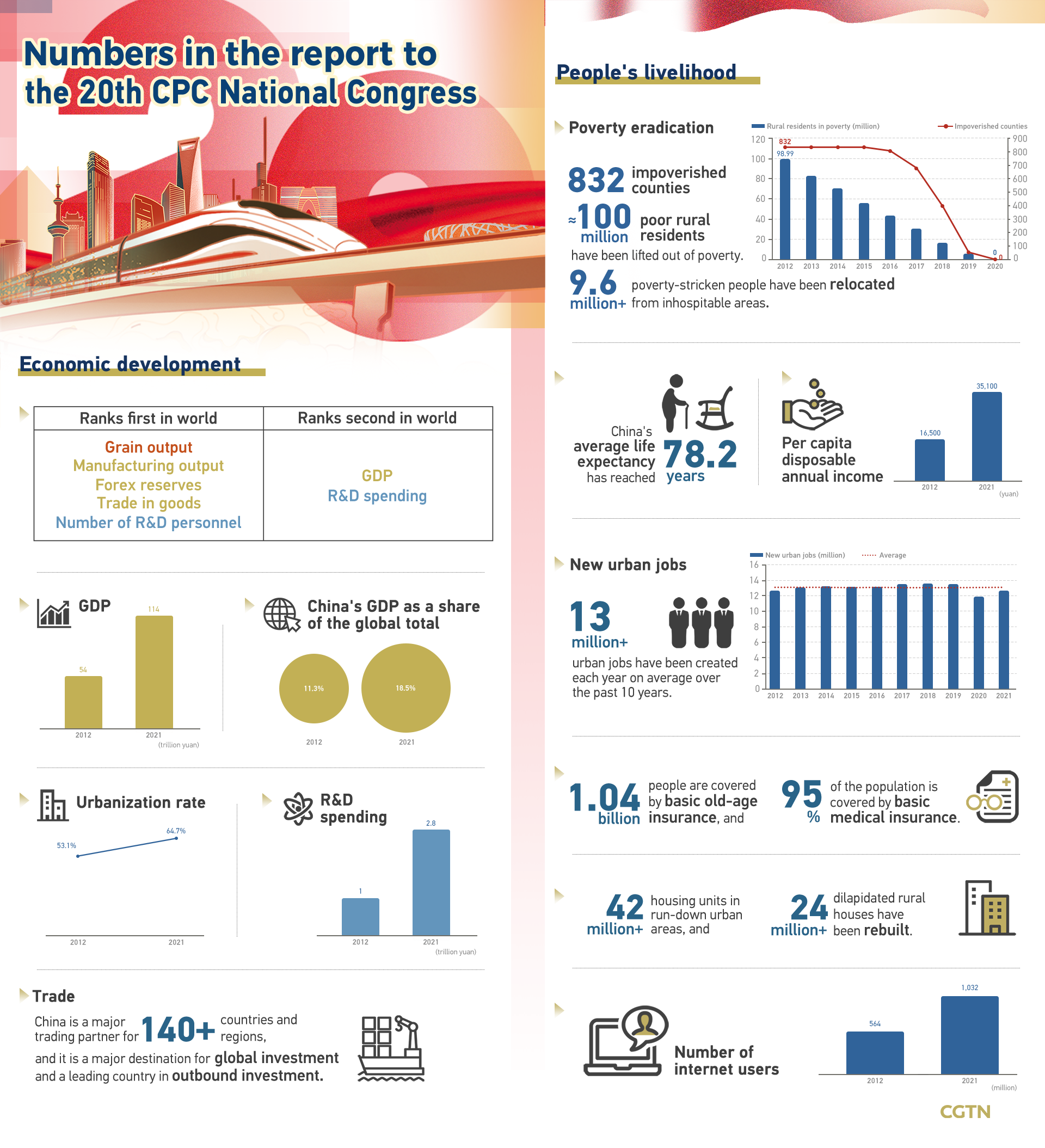 2. Security in all areas

The report focuses heavily on the importance of national security, as is reflected by the 80 mentions of the term "security," which is described as the "bedrock of national rejuvenation," in the English text.

It calls for a "holistic" approach to national security and for it to be promoted "in all areas and stages of the work of the Party and the country."

The reports warns that the current systems for protecting national security are inadequate, and calls on Party members to "promote national security in all areas and stages of the work of the Party and the country," and also emphasizes the importance of food and energy security as well as the protection of industrial and supply chains.

The continued modernization of China's military features heavily, with the goal of becoming a "world-class military" by 2050.

The central role of the CPC in achieving national rejuvenation is stressed in the report, which also contains warnings that the Party must not rest on its laurels.

"With full confidence, the CPC and the Chinese people are driving the great transformation of the Chinese nation from standing up and growing prosperous to becoming strong," it reads.

Key phrases related to the Party include "strengthen," "strategic plans" and "Socialism with Chinese Characteristics." The report praises the role of the party "in effectively responding to grave, intricate international developments and a series of immense risks and challenges."

It also emphasizes the importance of adherence to "adapting Marxism to the Chinese context and the needs of the times," and "uphold the unity between Party leadership, the running of the country by the people, and law-based governance."

"Uphold" and "unity" are frequently recurring terms, indicating the importance placed on the strength of institutions and stability.

The report also makes clear that the Party must continue to evolve. It introduces the idea of improving the systems for exercising full and rigorous self-governance, and emphasizes the importance of self-reform.

4. Challenges conquered and ahead

The report features an assessment of the challenges the Party has faced down, and warnings about about those that lie ahead for China – it cautions that the path to national rejuvenation is beset by "high winds, choppy waters, or even dangerous storms."

"The Central Committee has brought together the entire Party, the military, and the Chinese people and led them in effectively responding to grave, intricate international developments and a series of immense risks and challenges," the report says.

It also warns that the challenges facing the Party and the country will be long-lasting: "the tests the Party faces in governance, reform and opening up, the market economy, and the external environment will exist for a long time to come, as will the dangers of a lack of drive, incompetence, disengagement from the people, inaction, and corruption."

The report adds there have been "drastic changes in the international landscape, especially external attempts to blackmail, contain, blockade, and exert maximum pressure on China," warns that in "strategic opportunities, risks, and challenges are concurrent" for China in the current environment, and calls for an alertness to "black swans… and gray rhinos."

China is aiming to realize socialist modernization by 2035, after which it plans to build China into a great modern socialist country that is prosperous, strong, democratic, culturally advanced, harmonious and beautiful by 2050. 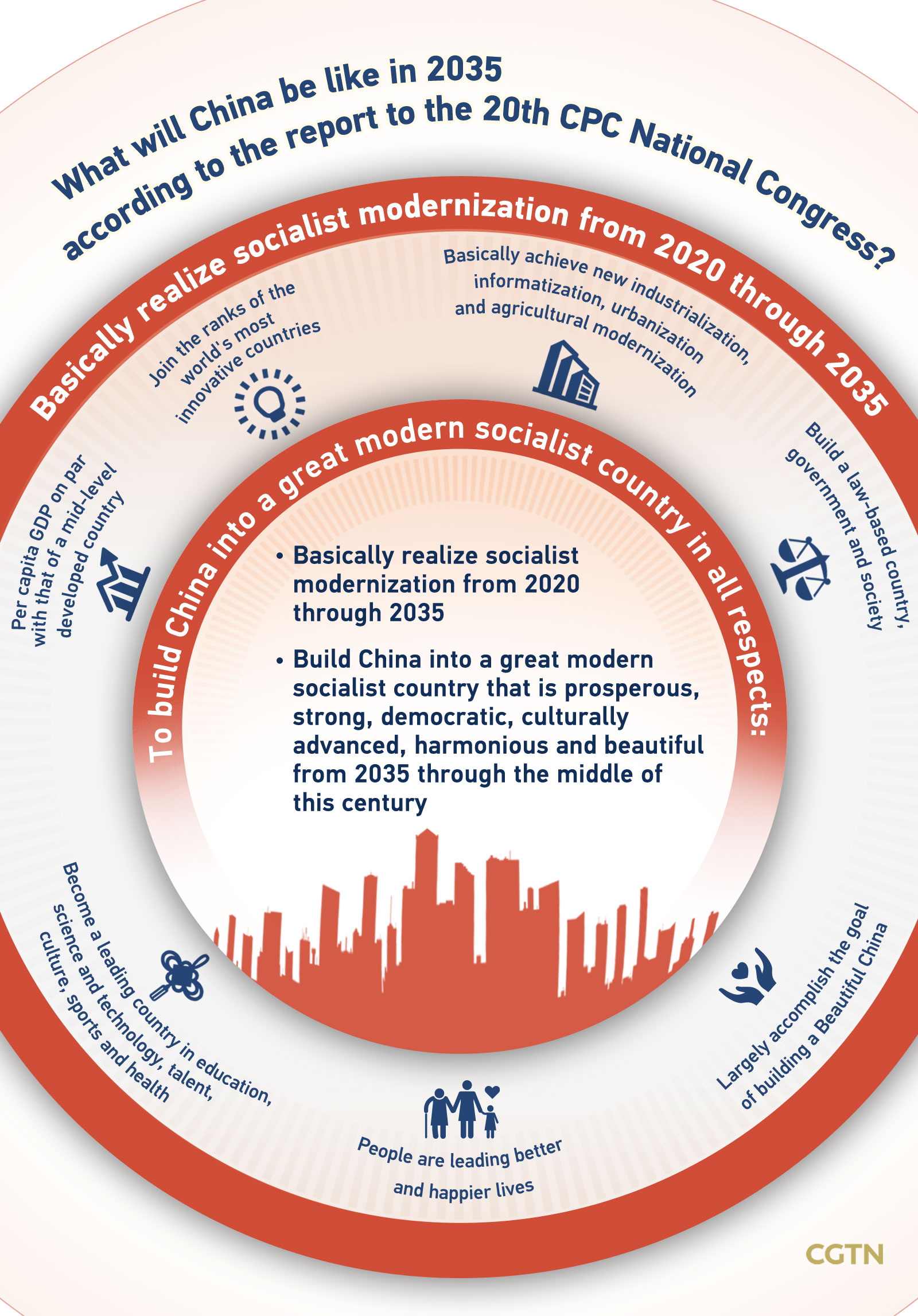 The vision of China for 2035 set out in the report includes per capita GDP being on a par with a mid-level developed country, building a law-based society and joining the ranks of the world's most innovative countries – all with the aim of creating a society where the people are leading better and happier lives.

The next five years will be crucial in getting the aim of building a modern socialist country in all respects off to a good start, the report notes.

"On the journey ahead, we must firmly adhere to the following major principles: upholding and strengthening the Party's overall leadership; following the path of socialism with Chinese characteristics; applying a people-centered development philosophy; remaining committed to deepening reform and opening up; and carrying forward our fighting spirit."