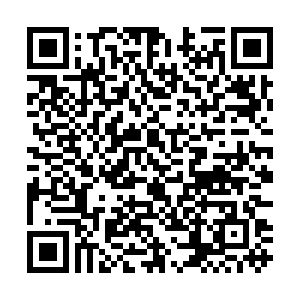 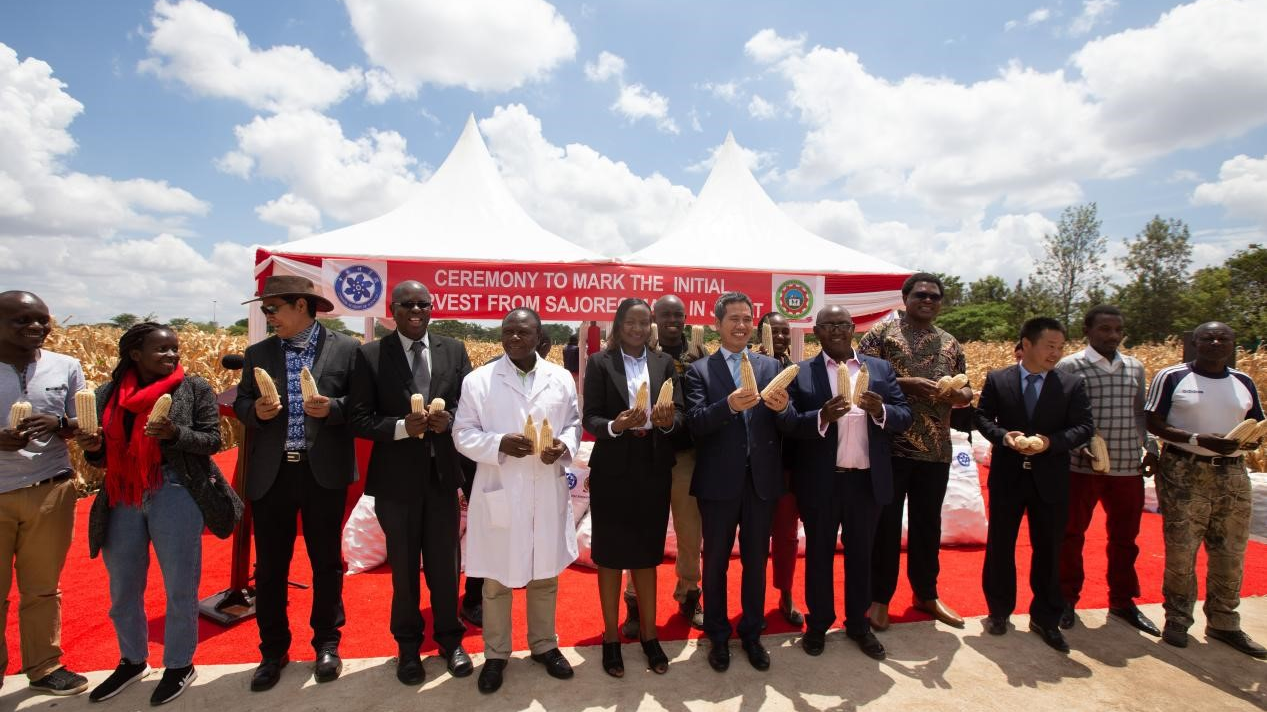 Chinese and Kenyan scientists unveil the first harvest of a high-yielding maize variety at the Jomo Kenyatta University of Agriculture and Technology in Nairobi, Kenya, November 5, 2022. /China Media Group

Chinese and Kenyan scientists unveil the first harvest of a high-yielding maize variety at the Jomo Kenyatta University of Agriculture and Technology in Nairobi, Kenya, November 5, 2022. /China Media Group

The first harvest of a high-yielding maize variety conceived through joint research between Chinese and Kenyan scientists was unveiled on Friday amid expectations that it will help tackle food insecurity affecting local small-holder farmers.

David Mburu, a lecturer at the College of Agriculture and Natural Resources at Jomo Kenyatta University of Agriculture and Technology (JKUAT), said the Chinese and Kenyan researchers identified the local maize variety and conducted research on viable agronomic practices like weeding, spacing, pest and disease control that would boost its yield without altering its genetic make-up.

"This maize that we are celebrating today is a local variety, and we only conducted research on agronomic practices that can lead to better yields. It is a variety that can grow well in low rainfall areas," said Mburu.

Planted in May at a Modern Agricultural Demonstration Area adjacent to Sino-Africa Joint Research Center (SAJOREC) domiciled within JKUAT, the maize matured at the right time, recording 2,700 kilograms yield per acre in the demonstration area, about 50 percent higher than the yield in the surrounding area, said Mburu. 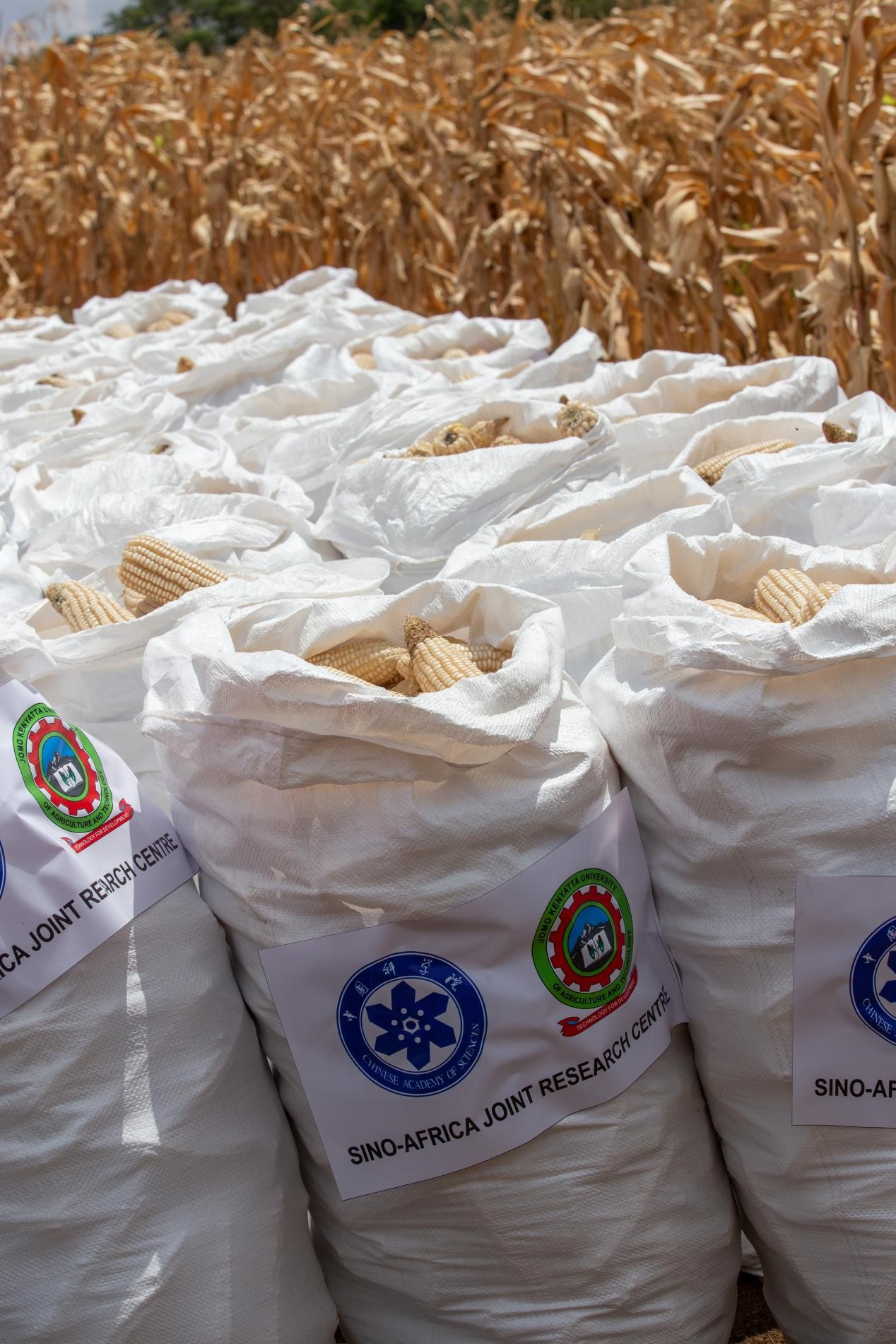 The first harvest of a high-yielding maize variety planted at a modern agricultural demonstration area adjacent to the Sino-Africa Joint Research Center at the Jomo Kenyatta University of Agriculture and Technology. /China Media Group

The first harvest of a high-yielding maize variety planted at a modern agricultural demonstration area adjacent to the Sino-Africa Joint Research Center at the Jomo Kenyatta University of Agriculture and Technology. /China Media Group

According to SAJOREC, the university allocated 10 acres of land as the core demonstration area, and the Chinese Academy of Sciences provided project funds, high-yield germplasm resources and technical support. Both sides participated in the management and shared agricultural scientific research results.

Maize is one of the staple foods for Kenyans. However, the country is suffering from drought, which has led to a reduction in maize production.

"We have also done a number of experiments not only within the university, but we have done field trials in the farmers' fields; some are the arid and semi-arid areas. So this harvest means a lot to African countries," Mburu said.

"We hope we're going to continue this project so that farmers can benefit from the research. We hope with SAJOREC facilities, there will be more scholarships for students so that we can impact the farming communities in Kenya for food security," he added.

Yan Xue, executive director of SAJOREC and director of the International Cooperation and Education Division of the Wuhan Botanical Garden of the Chinese Academy of Sciences, said the center will expand its maize planting scale and carry out in-depth research on improving yield, taste, and disease and pest resistance.

According to Yan, high-yield maize varieties suitable for Kenya's climate will be selected for promotion.

Yan noted that China's soil moisture monitoring system and ultrasonic bird removal system will be introduced into SAJOREC to explore a set of agricultural development paths suitable for Kenya's climate and national conditions and help Kenya achieve food security, adding that the main focus of Chinese and Kenyan scientists was to research about production technologies leading to improved maize harvest per acreage as opposed to utilizing genetic engineering.

Kenyan botanist Robert Wahiti Gituru has hailed the China-Kenya scientific cooperation, which has made tangible achievements. "We are training continually young African scientists through our friends and collaboration with the Chinese side. SAJOREC is the best example of China-Kenya cooperation on agricultural technologies, biodiversity and food safety," said Gituru, co-director of SAJOREC, based at JKUAT.

SAJOREC has carried out substantive cooperation with universities and research institutions in more than 10 African countries, including Kenya, and trained hundreds of graduate students and management and technical training personnel for African countries.