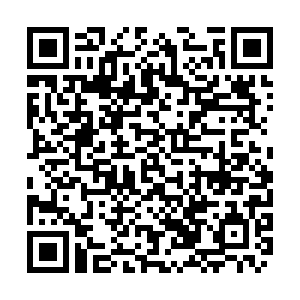 National flags of China and Germany are seen in Tian'anmen Square in Beijing, capital of China, November 4, 2022. /CFP

National flags of China and Germany are seen in Tian'anmen Square in Beijing, capital of China, November 4, 2022. /CFP

Editor's note: Belunn Se is a senior industry observer based in Shenzhen, China. The article reflects the author's opinions and not necessarily the views of CGTN.

China has been Germany's largest global trade partner for six consecutive years. The bilateral trade volume between the two reached a new high of 245.3 billion euros ($240 billion) in 2021.

As of today, more than 5,000 German enterprises are operating in China. Furthermore, German companies are increasing their investments in China this year. Earlier this September, German chemical giant BASF began the construction of an integrated petrochemicals project in China's southern province of Guangdong, with a total investment of about 10 billion euros. The project, based in the city of Zhanjiang, is the single largest project of German enterprises investing in China. In October, Volkswagen announced that it would invest about 2 billion euros ($1.99 billion) in a joint venture in China for software production.

Moreover, in recent years, Sino-German investment has been upgrading from "one-way" to "two-way." Chinese investment in Germany has grown significantly as well. The number of Chinese investment projects in Germany in 2021 was 149, holding the third place. Germany is also becoming a favorite investment destination for Chinese enterprises, especially new energy corporations such as CATL, Gotion Hi-Tech and EVE Energy that have built facilities in Germany one after another.

From global market perspective, China is an important growing large single market, and also the critical source of commodity supply. From long-term perspective, multinational companies are intensifying their investment and deployment in China by weathering the comparative advantage of comprehensive cost and profitability. On one hand, it would bring convenience to be close to the market and make full use of China's huge market demand; and on the other hand, they could benefit from China's efficient industrial system. In addition to the short-term factor, during the energy crisis in particular, China's lower energy costs and mature supply chain advantages more prominent.

This year is the 50th anniversary of the establishment of diplomatic relations between China and Germany. Successive German leaders have been investing much effort in cultivating solid Sino-German relations.

Former German Chancellor Angela Merkel visited China 12 times during her 16-year tenure in keeping with the tradition of pragmatic friendship laid down by former Chancellor Helmut Kohl and nurtured by his successor, and Merkel's predecessor, Gerhard Schroder. Ever since, the Sino-German relationship has continued to flourish and was upgraded to an all-round strategic partnership in 2014.

German Social Democratic Party gained the most votes in the election, Olaf Scholz acceded as the German Chancellor in December, 2021 leading a three-party coalition government. The other two parties, especially the extremely ideological Greens that control Germany's economy and diplomatic apparatus, are imposing implication of uncertainty in the volatile international circumstance, advocating a "values-oriented" approach to Sino-German relations.

On April 28 this year, the incumbent German Chancellor Scholz made his first stop in Asia to Japan, which was seen as a break with the diplomatic practice set by Merkel.

Later, Chancellor Scholz made a clear statement in favor of globalization when he attended a Mechanical Engineering Summit in Berlin on October 11, underlining his points that globalization "makes a lot of prosperity possible." At the same time, he also firmly opposed decoupling, stressing that decoupling would be a completely wrong path.

Scholz believes that Germany and the EU must establish a broader and more robust trade relationship, not only with individual countries, but also with multilateral countries, including China, and with emerging countries in Asia, Africa and Latin America.

At the invitation of the Chinese government, Scholz visited China on November 4. For some time now, although there have been some voices in German politics about "decoupling" from China, the German enterprises have been very firm and vocal in support of a better bilateral ties between the two nations. 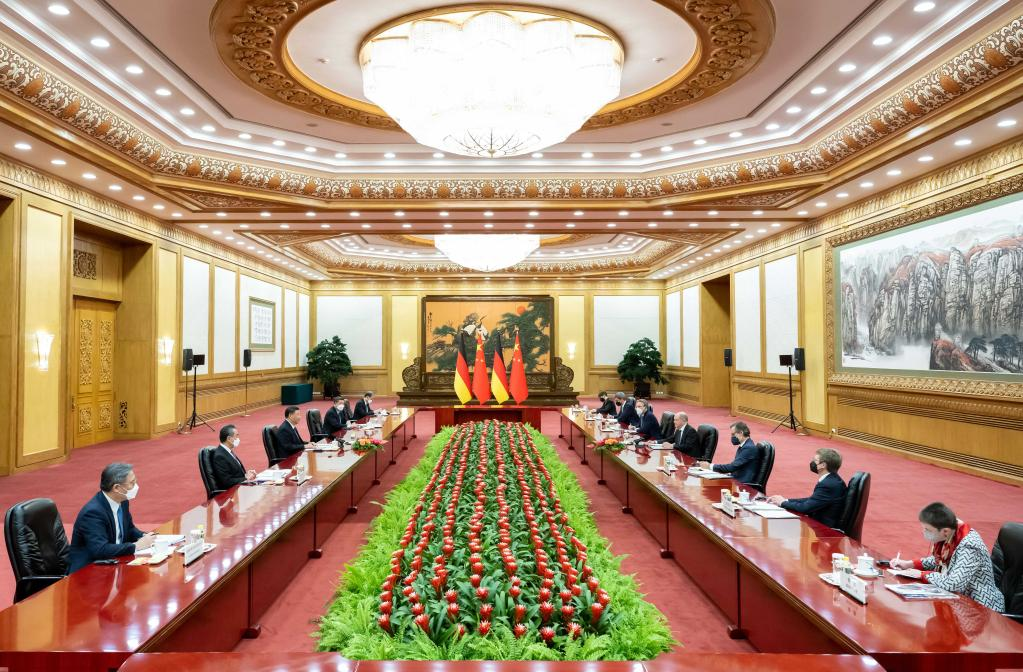 Chinese President Xi Jinping meets with German Chancellor Olaf Scholz on his official visit to China at the Great Hall of the People in Beijing, capital of China, November 4, 2022. /Xinhua

Chinese President Xi Jinping meets with German Chancellor Olaf Scholz on his official visit to China at the Great Hall of the People in Beijing, capital of China, November 4, 2022. /Xinhua

And the Association of German Chambers of Commerce and Industry (Deutscher Industrie- und Handelskammertag, abbreviated "DIHK") clearly expressed its support for German Chancellor Scholz to lead a delegation to China on November 4. Martin Wansleben, General Director of DIHK, said that Scholz's visit to China was the right decision, that Germany cannot decouple from China, and "without China, Germany will become poorer."

The close economic ties between Germany and China are the consequence of globalization that is in accord with the market mechanism, and this complementarity of economic resources is beneficial to the companies and peoples of both countries, and both sides benefit greatly from the pragmatic cooperation.

Scholz's visit to Beijing and the congenial conversations that the two sides engaged in will further inject new impetus to the in-depth development of the all-round strategic partnership between China and Germany.