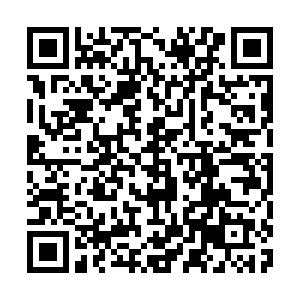 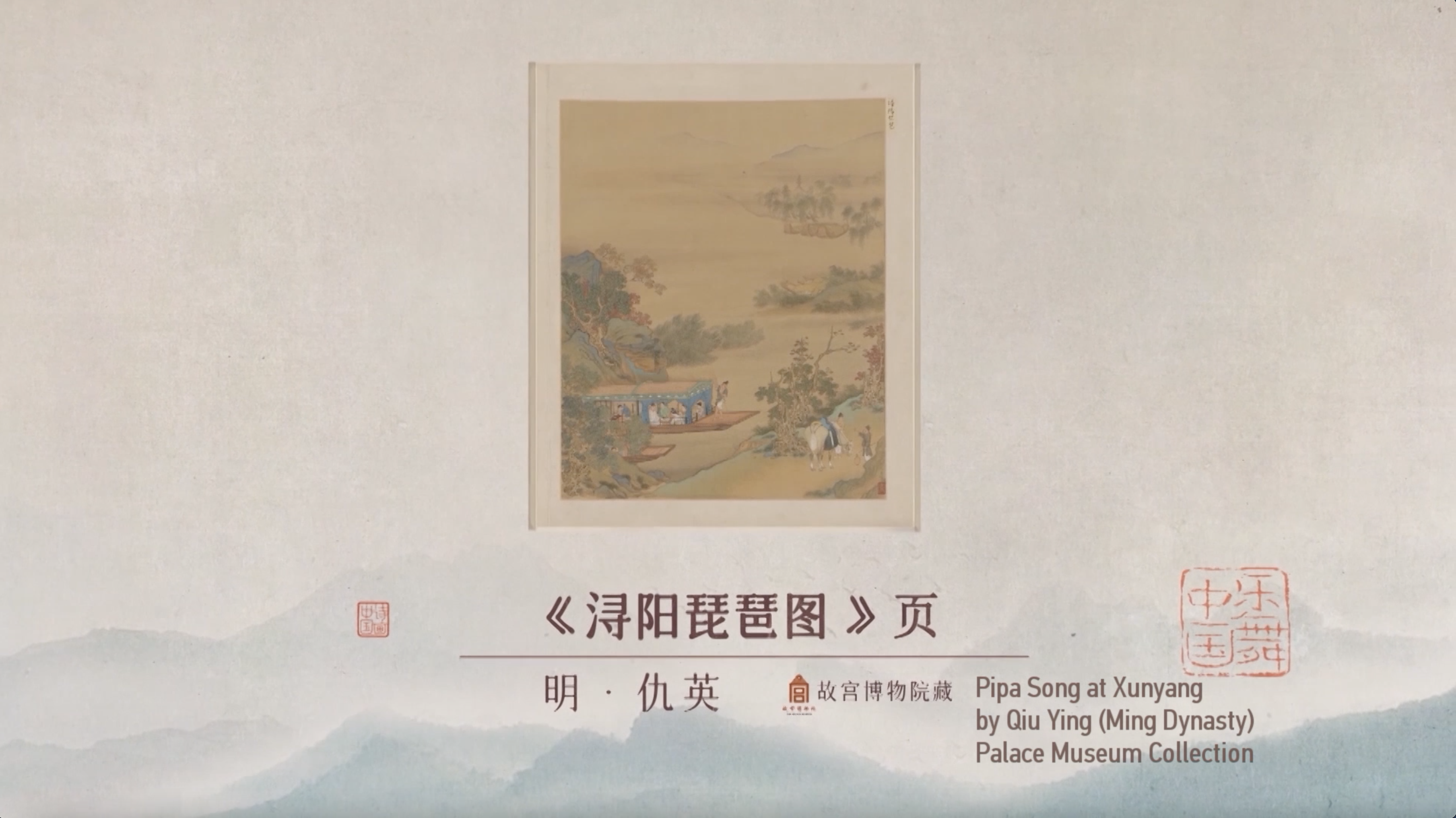 "Pipa Xing," a poem written by Bai Juyi of the Tang Dynasty (618-907), is an outstanding narrative that has earned its place in the history of Chinese poetry. Hundreds of years after its creation, Qiu Ying of the Ming Dynasty (1368-1644) used the poem as an inspiration to create a masterpiece of landscape painting, "Pipa Song at Xunyang." Qiu transformed the poem into a panoramic image with meticulous brushwork and vibrant colors, suffusing it with a dreamlike atmosphere.

In "Pipa Xing," Bai skillfully combined a sense of narrative, lyricism and scenic beauty, expressing sorrow for the tribulations of his life and the challenges of his time. It is this atmosphere or the soul of the poem that the painting "Pipa Song at Xunyang" reflects. Amid the mountains and rivers, a boatman is shown steadying his vessel and keeping it in place, while a woman onboard plays the pipa.

In front of some old trees on the river bank, two servants, one holding a lamp and the other leading a horse, await their master to send their guests back. The picture recreates the classic image depicted in "Pipa Xing," while also expressing the poetic sentiment of the phrase "the sound of pipa breaks people's hearts." 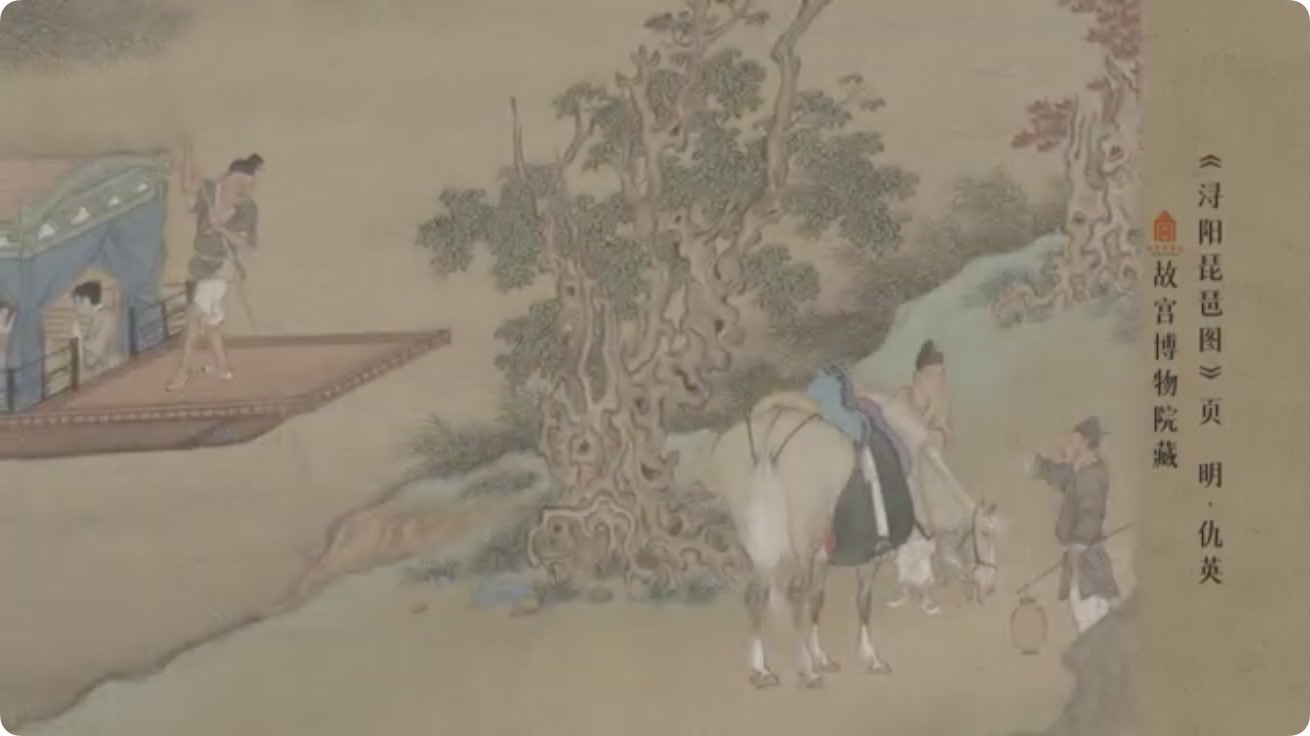 According to Pu, the painting is not just an exemplary display of freehand brushwork, but rather an innovative work of art striving for realism.

In the picture, the figures, boat and horses are drawn with great verisimilitude, while the plants and rocks are depicted in a more imaginative style. This combination of styles reflects the painter's desire to record life accurately before the advent of photography while still adhering to the artistic fashions of the times.

According to Yu Yang, a professor at the Central Academy of Fine Arts, "Pipa Song at Xunyang" presents a panoramic view of the poetic sense expressed in "Pipa Xing." The translucent colors and scenery cast the landscape in such a way that recreates the original poem's lamentation of life. 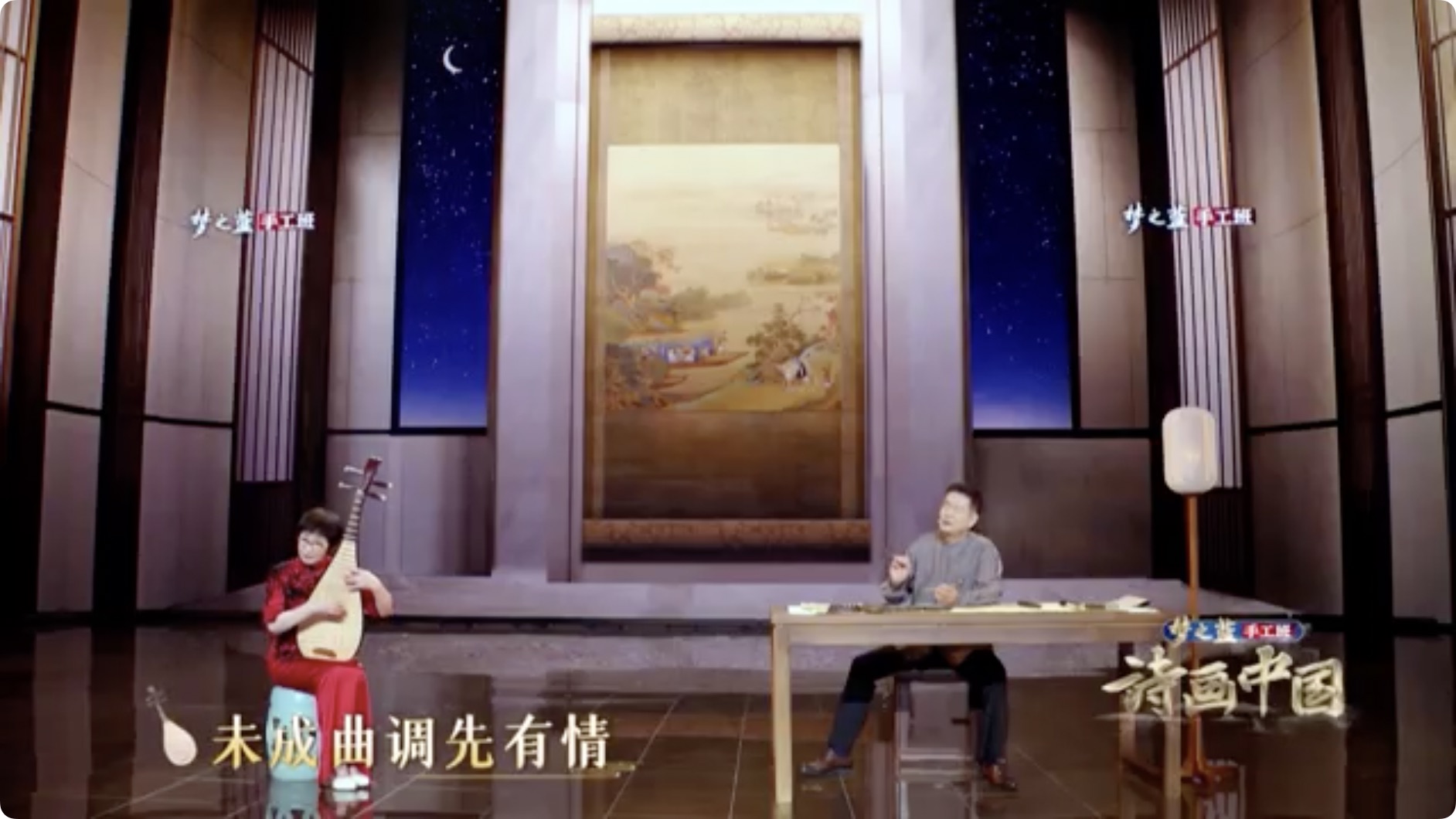 Qiu was among the "Four Renowned Artists of the Ming Dynasty." His subjects are all firmly rooted in real life, elegant and embody a scholarly style. His works seldom express cold or bleak moods, as was the fashion at the time among literati painters; rather, they convey a bright and uplifting atmosphere.

"Pipa Song at Xunyang" ranks highly among Qui's collection of paintings known as "Stories," all famous for their delicate landscapes, fluid figures and accurately drawn clothing. Qiu's arresting arrangement of the scenery and clever compositions are particularly well put together in this painting.

From the soulful prose and musicality of "Pipa Xing" to the hauntingly beautiful scenes rendered in "Pipa Song at Xunyang," not to mention the collaborative efforts of these two highly acclaimed artists on a contemporary stage, the artistic values of yore are given a new lease of life by fresh generations of artists, inspiring more Chinese talents to contribute to this cultural treasure trove.