Download
A new benchmark for the Bandung Spirit
Qian Feng 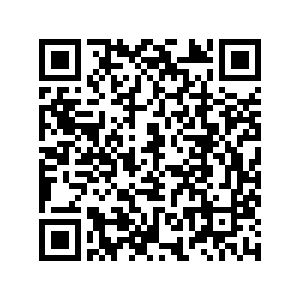 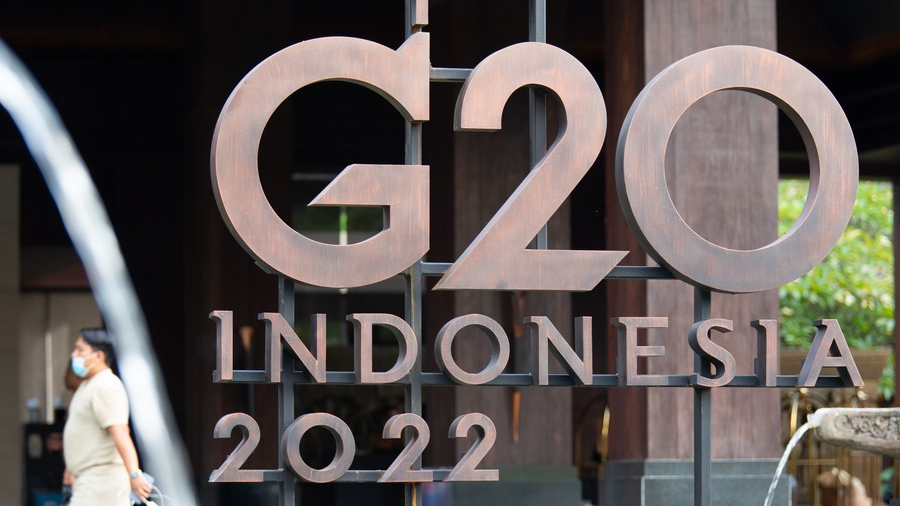 The logo for the upcoming 17th Group of 20 (G20) Summit outside Apurva Kempinski, the main venue for the summit in Bali, Indonesia, November 12, 2022. /Xinhua

The logo for the upcoming 17th Group of 20 (G20) Summit outside Apurva Kempinski, the main venue for the summit in Bali, Indonesia, November 12, 2022. /Xinhua

Editor's note: Qian Feng is the senior research fellow of the National Institute of Strategic Studies, Tsinghua University and Taihe Institute. The article reflects the author's views and not necessarily those of CGTN.

On November 15-16, the G20 Summit will be held in Bali, Indonesia. The Indonesian government announced the Jakarta-Bandung High-Speed Railway (JBHSR) will be tested and operated during the summit, while the railway high-speed comprehensive test train (CIT) is scheduled to be launched on June 16, 2023, marking a new page for strategic cooperation between China and Indonesia.

As a landmark project for the Belt and Road Initiative (BRI), the 142.3 kilometers-long JBHSR is a joint venture connecting Jakarta, the capital of Indonesia, and Bandung, the nation's fourth largest city. It's the first high-speed railway in Indonesia and Southeast Asia. The JBHSR can improve local traffic conditions, boost industrial development and spur ahead Indonesia's economic and social development.

The JBHSR project started in January 2016 with Chinese President Xi Jinping delivering a congratulatory letter to Indonesian President Joko Widodo. The project has set a new benchmark for bilateral cooperation in various fields, especially in infrastructure and production capacity.

President Widodo believes the JBHSR can upgrade efficiency and share advanced technologies in the manufacturing sector, while helping the two countries enhance their international competitiveness. JBHSR construction started in June 2018 with the two sides overcoming various challenges such as the complex geographical environment, difficult construction technology, and COVID-19 prevention and control. The overall progress of the Jakarta-Bandung high-speed railway project has reached about 90 percent to the point of completion.

The JBHSR can drive the regional "economic growth belt." Its maximum design speed is 350 km per hour. The travel time between Jakarta and Bandung will be shortened from more than three hours to 40 minutes, which can better facilitate the flow of nearly 20 million people in the region in order to enhance the development of manufacturing, power, electronics and logistics. 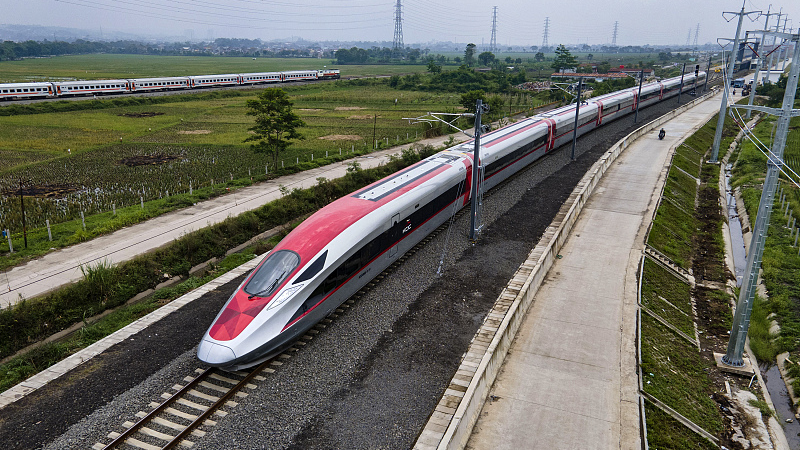 The electric multiple units are being tested for hot-running on the Jakarta-Bandung High-Speed Railway trial section in Bandung, Indonesia, November 9, 2022. /CFP

The electric multiple units are being tested for hot-running on the Jakarta-Bandung High-Speed Railway trial section in Bandung, Indonesia, November 9, 2022. /CFP

The accelerated logistics speed can reduce the transportation cost of Bandung textiles. There are also many industrial parks built along the JBHSR, including the China-Indonesia Economic and Trade Cooperation Zone, which can boost the development of emerging industries.

And despite the lack of qualified high-speed rail construction personnel in Indonesia, the Chinese construction team has trained the locals from the beginning. The Indonesian staff hove gotten skilled at relevant technologies, and they will engage in the operation and maintenance of the JBHSR in the future.

The JBHSR is also a demonstration of high-speed rail cooperation among Asian countries. As the first order of China's high-speed railway to go global, the JBHSR has adopted China's railway technology and standards, which are tailored for Indonesia according to the local climate, route conditions, cultural traditions and living habits of the people.

After its completion, the JBHSR will introduce the Internet ticketing, wireless network coverage, face brushing station, self-service ticketing and other world advanced transportation service technology for added convenience and comfort. China's high-speed railway has strengthened the international community's confidence in the BRI, along with future cooperation with China.

As emerging and populous countries in Asia, both China and Indonesia are pursuing economic development and improving people's livelihood. As early as ancient times, China and Indonesia were attached to the ocean, and the ancient Maritime Silk Road closely connected the two countries. In today's era, the BRI is compatible with Indonesia's national development strategy.

When taking office in 2014, President Widodo proposed the "Global Ocean Fulcrum" strategy, which resonates with the BRI. In 2018, the two governments signed a memorandum of understanding on jointly promoting the "Belt and Road" and "Global Ocean Fulcrum", putting the BRI on the fast track, and the JBHSR has promoted the two countries to achieve common development and prosperity together. The two great nations have formed a new pattern of "four-wheel drive" of political, economic, cultural and maritime cooperation, while building a community with a shared future.

Bandung was the host of the first Asian-African Conference in April 1955. Back then, the leaders of Asian and African countries have put forward the ten principles for handling international relations here, forming the Bandung Spirit with "unity, friendship and cooperation" as the core.

Accordingly, China and Indonesia support the JBHSR and other cooperation projects to practice the Bandung Spirit and continue on with a friendly chapter of peace and cooperation, openness and inclusiveness, mutual learning and mutual benefit, thus injecting "positive energy" into regional development and world economic recovery.