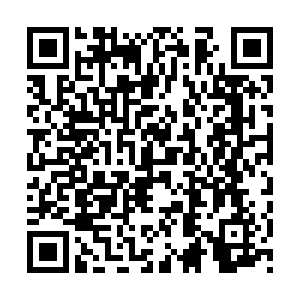 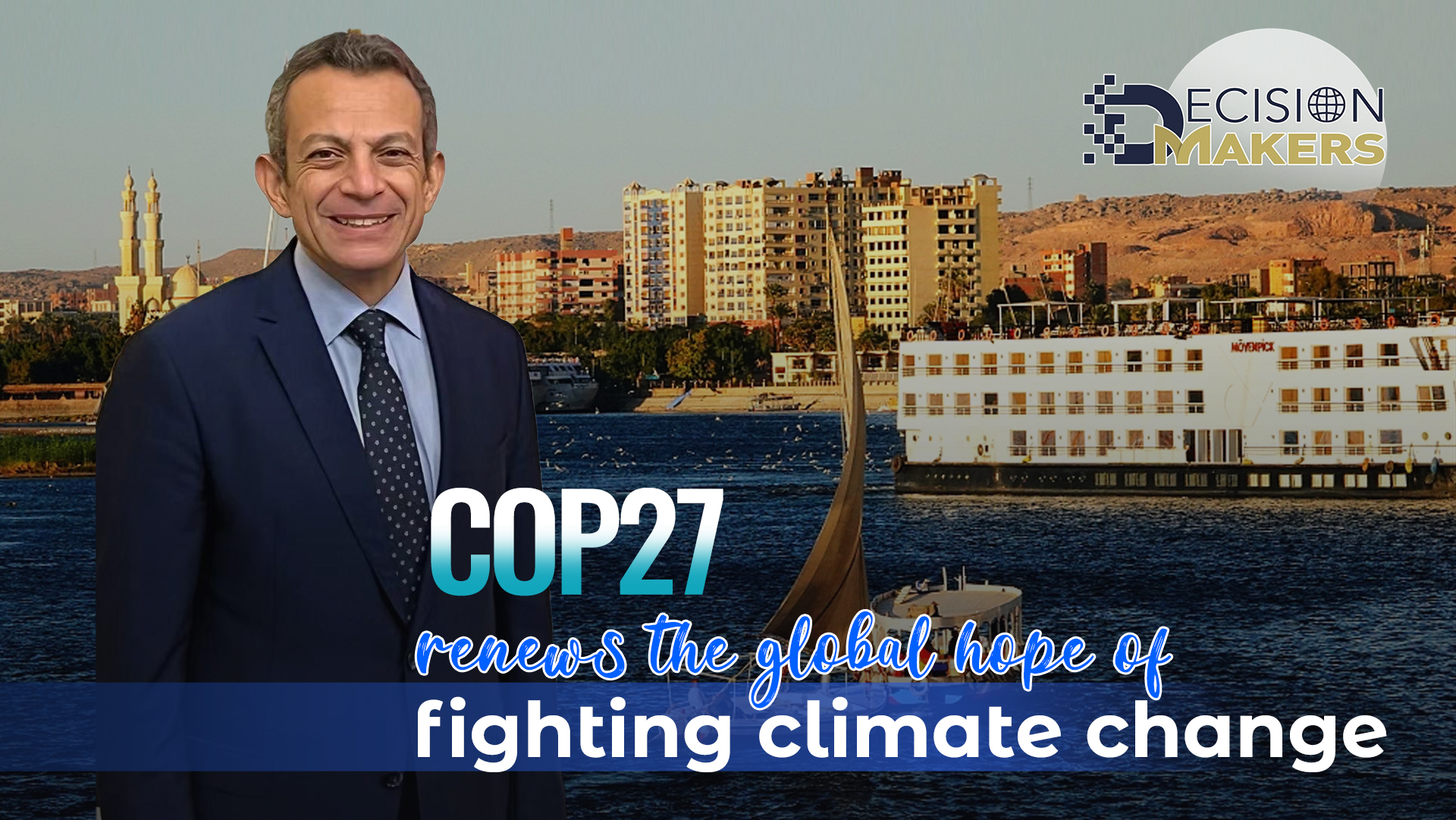 Editor's note: Decision Makers is a global platform for decision makers to share their insights on events shaping today's world. Assem Hanafi is the ambassador of the Arab Republic of Egypt to China. The article reflects the author's views and not necessarily those of CGTN.

The city of Sharm El-Sheikh, Egypt, is currently hosting the 27th Conference of the Parties to the UN Framework Convention on Climate Change (COP27), and a plethora of climate related events, where Egypt demonstrates its belief in the necessity of urgent actions addressing the climate crisis and the importance of a swift and urgent shift from negotiations and planning to implementation and tangible action.

Egypt's vision for COP27 can be outlined by what the Egyptian Minister of Foreign Affairs and COP27 President-Designate, Sameh Shoukry, said: "We must accelerate climate action on all fronts including mitigation, adaptation and finance in addition to adopting more ambitious mitigation measures to keep the 1.5 degree Celsius within reach. There can be no room for delay in the fulfilment of climate pledges or backtracking on hard earned gains in the global fight against climate change. We must work together for implementation. We need to act, and act now, to save lives and livelihoods." Moreover, Egypt believes that in order to strengthen the quality of climate action, current geopolitical challenges should not hinder international communities' efforts and joint actions.

In July 2022, Egypt updated its Nationally Determined Contributions (NDC), upon the directives of Egypt President Abdel Fattah Al Sisi, in which it announced its emission reduction objectives for 2030, where it pledges to reduce its greenhouse gas (GHG) emissions in the power generation, transmission and distribution sector by 33 percent. To attain this goal, Egypt intends to accelerate the scale-up of on-grid renewable energy by reducing coal capacity and replacing inefficient thermal power plants. As for the oil and gas sector, Egypt pledges a 65 percent reduction in emissions in 2030 by extension of the natural gas pipeline network to help households switch towards cleaner fuels.

For the transport sector, Egypt plans a 7 percent reduction in emissions, and planning to drive low fossil fuel modal shift from private passenger and freight vehicles into mass transit thanks to the expansion of the Cairo underground network, the development of the Alexandria Metro, the development of several rail lines, the transformation of public buses to operate on lower carbon intensive fuels (i.e. natural gas), and greening of the civil aviation sector through the introduction of 2 percent biofuels for aircraft, which was used for the first time to operate an EgyptAir's flight transporting a delegation attending COP27. In addition, Egypt has expanded the construction of wind power plants, as well as solar farms as demonstrated by the construction of "Benban" solar park, one of the largest solar power plants in the world.

However, in order for Egypt and for most developing countries to achieve their NDCs and to successfully fight against climate change, it is crucial to have an adequate and predictable climate finance model. To this end, Egypt calls for enhanced transparency of finance flows and facilitated access to meet the needs of developing countries especially those in Africa, Least Developed Countries (LDCs), and Small Island Developing States (SIDS). 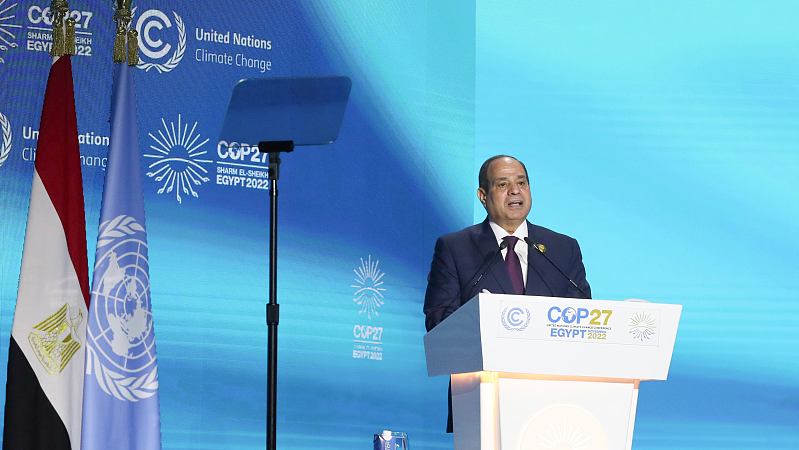 In fact, a report commissioned by the current and previous climate summit hosts, Egypt and Britain, was released ahead of talks on climate change finance at the COP27. It stated that "The world needs a breakthrough and a new roadmap on climate finance that can mobilize $1 trillion in external finance that will be needed by 2030 for emerging markets and developing countries."

The report also highlighted that the majority of the increase in financing should be provided by the private sector, both domestic and foreign, while annual flows from development banks should be tripled. Concessional loans for environmental goals, which offer more favorable terms than markets, should also be stepped up. The report also calls on governments of developed countries to double their grants and low-interest loans to developing countries from $30 billion annually to $60 billion by 2025.

The COP27 is also a display of the strong cooperation between Egypt and China.There is a mutual vision between the two countries when it comes to the necessity of continuing the global effort to mitigate climate change impacts. This was clear in the latest China's Policies and Actions on Climate Change report in which the Chinese government repeatedly calls on developed countries to fulfilling existing commitments, particularly in the areas of financing and adaptation, as well as the report of the 20th National Congress of the Communist Party of China, presented by Xi Jinping, which pointed out the necessity of protecting the environment, fighting climate change and accelerating green economy transformation. This was also clearly demonstrated with the success story of the Chinese authorities in drastically reducing the air pollution rates in the city of Beijing.

Being a partner in multi-billion-dollar ecofriendly projects, China works hand in hand with Egypt on important projects including Egypt's first light railway train, first electric bus, in addition to investments in Egypt's solar farms. It is important to mention that fighting climate change requires collective efforts and continuous dialogue between all stakeholders, both developing and developed countries. Furthermore, the high-level cooperation between China and the Egyptian presidency of COP27 continues to become stronger and assumes a crucial role within the upcoming months.

There is a reason for hope, this year's conference will add new milestones to the ongoing positive steps towards climate action which cannot be overlooked, such as the development of technology and satellite imaging which allows us to monitor any changes to the climate to a greater accuracy, and boosts our resilience in the fields of agriculture and offsetting desertification, in addition to the existence of early warning systems which provide protection against extreme weather conditions. Another cause for optimism is the ascendancy of science-based research on climate and environment, gaining access to global policy makers with climate change deniers on the wane, and the remarkable increase of youth engagement in climate awareness and action.