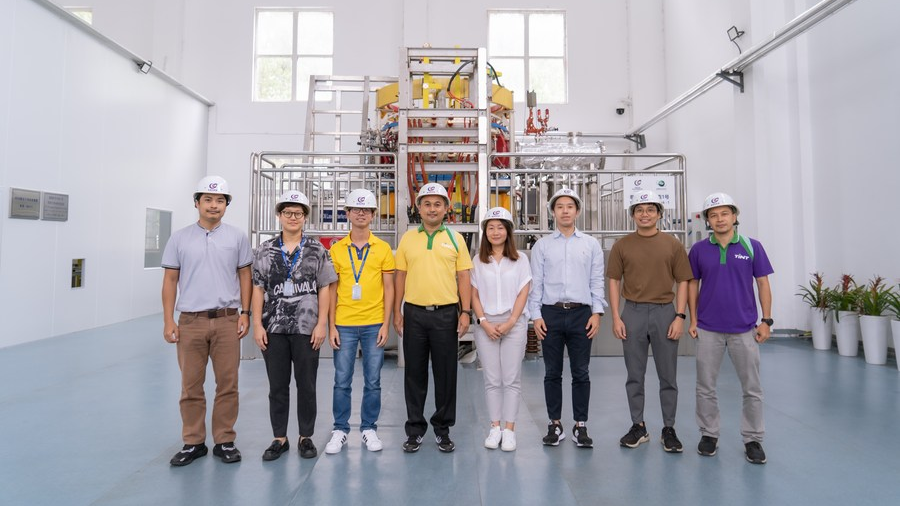 Scientists and engineers from Thailand pose for a photo in front of the Thailand Tokamak 1 (TT-1) machine in Hefei City, east China's Anhui Province, August 24, 2022. /Xinhua

Scientists and engineers from Thailand pose for a photo in front of the Thailand Tokamak 1 (TT-1) machine in Hefei City, east China's Anhui Province, August 24, 2022. /Xinhua

A giant tokamak, an experimental machine in which an ultra-high temperature plasma can be created to simulate the conditions for fusion reaction, has been dismantled and well-packaged in Hefei City, the capital of east China's Anhui Province. It is scheduled to be shipped to Thailand in mid-December.

The facility, renamed Thailand Tokamak 1 (TT-1), was developed by the Institute of Plasma Physics of the Chinese Academy of Sciences (ASIPP).

According to a cooperation agreement signed in 2017, the ASIPP would donate the tokamak to the Thailand Institute of Nuclear Technology (TINT) and help the country install and operate this facility and cultivate talent in the domain of fusion energy research and development.

"The whole facility is composed of 462 major parts, weighing over 84 tonnes. They will be shipped to Thailand in six containers," said Huang Yiyun, a key member of this project from ASIPP.

The facility is expected to arrive in Thailand in early January 2023. Three batches of Chinese staff, about 60 people in total, will be sent to Thailand to help assemble, adjust and test the machine before its official launch.

The ultimate goal of this kind of research is to create nuclear fusion like the sun, using deuterium abound in the sea to provide a steady stream of clean energy. It is estimated that the deuterium in one liter of seawater can produce, through fusion reaction, the amount of energy equivalent to 300 liters of gasoline.

To gain adequate theoretical knowledge and harness the operation of the tokamak, a group of nine scientists and engineers from Thailand came to Hefei in late June for an intensive training program, which lasted for over three months.

"We're all excited to see the coming of the TT-1 device. A new building has been specially designed to accommodate the facility in Thailand," said Dr. Nopporn Poolyarat, head of the Fusion and Plasma Division of TINT, in an email to Xinhua.