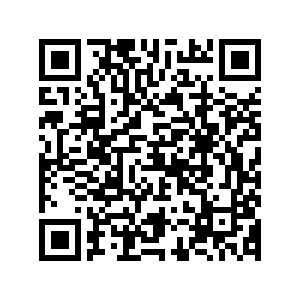 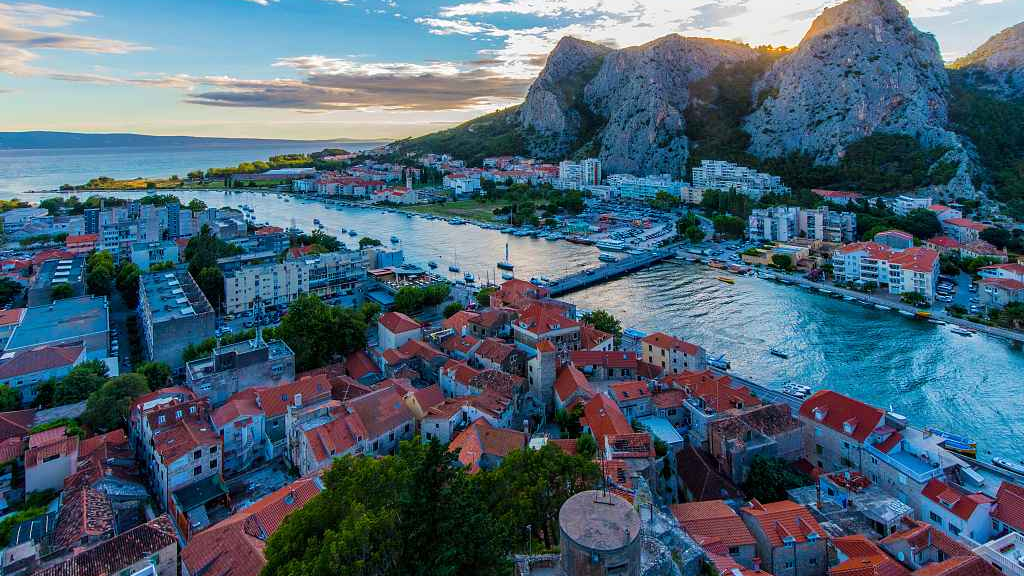 An aerial view of Omis Town near Split, Croatia. /VCG

An aerial view of Omis Town near Split, Croatia. /VCG

Editor's note: Zvonimir Stopic is a professor at Beijing's Capital Normal University and an associate of Zagreb School of Economics and Management, specialized in history and current affairs of China and Southeast Europe. He is an author of "Revolutionaries, Revisionists, Dogmatists, Dogs and Madmen: China and Yugoslavia from 1948 until 1971 (2022)." The article reflects the author's opinions and not necessarily the views of CGTN.

This New Year's Day is especially important for Croatia. On that day, by becoming the 27th member of the Schengen Area and 20th member of the Eurozone, Croatia has completed its decades-long voyage of becoming a full member of the European Union (EU). With January the 1st, 2023, as a part of the Schengen Area, remaining border control between Croatia and its EU neighbors ceased to exist, thus making Croatia's southeastern border the EU's border. By officially entering the Eurozone on the same day, Croatia has also adopted euro as its currency, and as such tied itself even more tightly to the EU's monetary and financial policies.

Croatia's road to the EU was long and, in many ways, a unique one. Besides Greece, Croatia was the only case of EU's enlargement which did not involve a cluster of countries. In January 2007, for example, Bulgaria was accepted together with Romania as EU member, while in May 2004, in its most extensive enlargement, Cyprus, Czech Republic, Estonia, Hungary, Latvia, Lithuania, Malta, Poland, Slovakia and Slovenia all became EU members.

Croatia is also a "special case" because it was the first country that had to undergo a special process of evaluation based on the higher demands for regional cooperation and political and economic transparency, stipulated by the Stabilization and Association Agreement (signed by Croatia in October 2001).

Other countries and regions that are to follow Croatia on this path include Albania, Bosnia and Herzegovina, Kosovo, Montenegro, North Macedonia and they would make the (EU's) political regional category of so-called Western Balkans.

Finally, since it was accepted to the EU in July 2013 – for almost a full decade – Croatia still holds the title of being the last country that joined EU, each year establishing itself as a stronger and more desired "role-model" for its neighboring "Western Balkans" candidates.

Croatia's road to the EU was also not a smooth one. Due to the complications regarding Croatia's cooperation with the Hague International Court of Justice considering prosecution of war crimes, at the time supervised by former Chief Prosecutor of two United Nations international criminal law tribunals Carla Del Ponte, it took around three years for negotiation for candidacy to begin in the first place. Another six years was needed for Croatia to gain an official "candidate status," during which Croatia faced many other challenges.

The largest coming from abroad was the unsolved border issue Croatia shared with Slovenia, which, until the two countries finally agreed to solve through an international arbitrary court, resulted in Slovenia's year-long "blockade" of Croatia's EU candidacy negotiations.

On the inside, Croatia was struggling with a series of corruption affairs which in the end toppled down the Croatian government, including former Prime Minister Ivo Sanader. Peculiarly, and perhaps even amusing to an extent, these affairs emerged after this same government implemented several anti-corruption laws so that it would appease EU's candidacy requirements for political and economic transparency.

Finally, Croatia's road to the EU has an interesting historical dimension. Speaking from the perspective curbed by the carefully molded historical narrative around which Croatian identity had been shaped in 1990s, Croatia's accession to the EU is nothing but its final return to Europe after for 100 years it had been kept out either by devastating wars or the two attempts to form Yugoslavia. 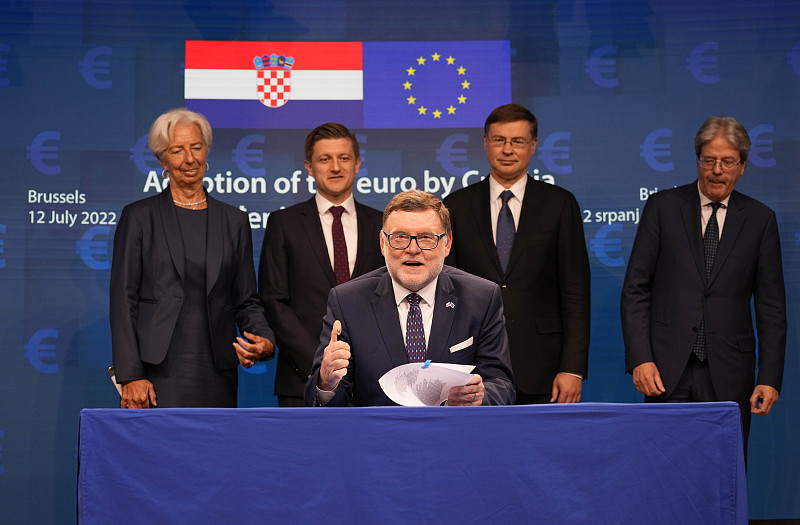 Signing ceremony for Croatia to join the euro in Brussels, July 12, 2022. /CFP

Signing ceremony for Croatia to join the euro in Brussels, July 12, 2022. /CFP

Other, equally narrow narratives pointed that Croatia's accession to EU can be seen as proof that "Croats" cannot exit independently. Because after "Croatian lands" had for almost 1,000 years been ruled by the Western powers, appetite of which had not been diminished in the post-First World War period. Croatia did not run for sovereignty and independency but sought a refuge from Europe in a Balkan multiethnic Yugoslavia.

Later, once this did not work twice, in 1990s Croatia broke off from Yugoslavia through a bloody war, only to quickly relinquish its hard-earned independency for another "master from the outside" – Europe, the same entity from which it attempted to run away one century ago.

Whichever narrative we chose, either these two or any other that stand between them, Croatia, as a small country of some 3.8 million people, famous predominantly for its tourism and national football team's achievements, on New Year's Day in political, financial, and legal terms, fully become a part of the EU.

For Croatians, who are already accustomed to traveling and working in the EU (since 2013, hundreds of thousands of Croatians migrated to EU countries in search of healthier working opportunities), the largest novelty is the adoption of euro as their new official currency.

However, even this will not turn to be any kind of dramatic change since Croatia's economy had been well accustomed to euro in every way but the official one, just as before euro it was accustomed to Germany's deutschmark.

Even though economically, Croatia's acceptance to Schengen Area and Eurozone will not bring any crucial economic changes to the EU, this will somewhat help to consolidate EU's territory, solve several security issues, and, most importantly, compel the EU to bring more attention to its soft belly – the "Western Balkans."