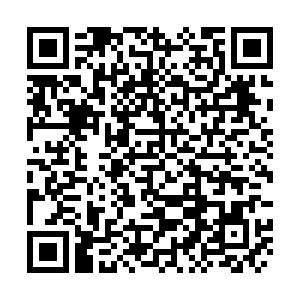 We spotted a lot of pictures on his bookshelves, and some of them were seen for the first time. Here, let's take a look at the stories behind the pictures.

President Xi took a solemn oath to the Constitution of the People's Republic of China (PRC) at the first session of the 13th National People's Congress at the Great Hall of the People in Beijing on March 17, 2018.

This was the first time China's top leader took the oath to the country's Constitution since the founding of the PRC on October 1, 1949.

The photo has been on Xi's bookshelf since his 2019 New Year Address. 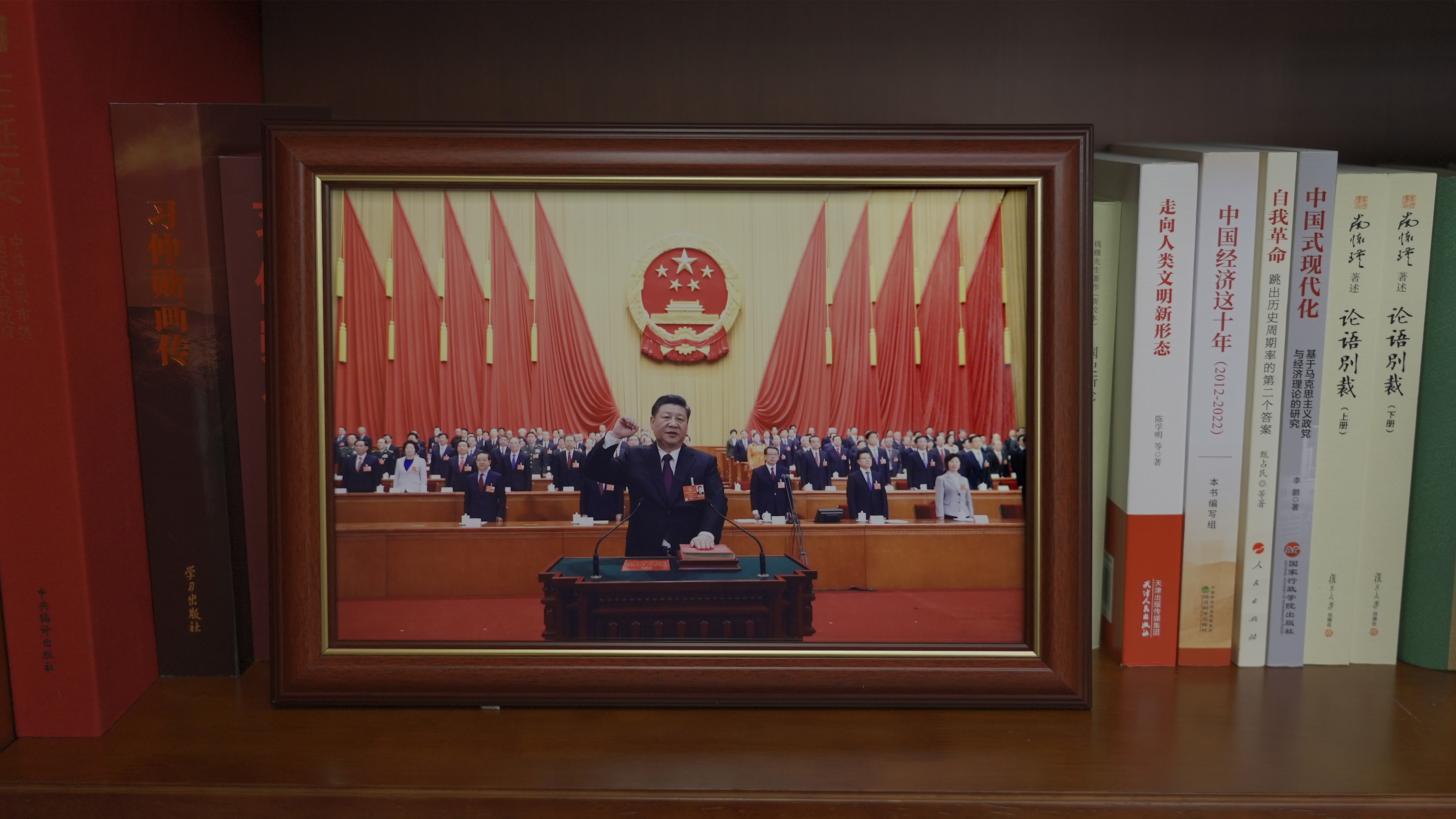 2. Xi in Indonesia for the G20 summit

President Xi attended the 17th G20 Summit in Bali, Indonesia, on November 15, 2022, which is the first multilateral summit he attends after the conclusion of the 20th National Congress of the Communist Party of China.

Xi delivered a speech titled "Working Together to Meet the Challenges of Our Times and Build a Better Future" at the first session of the summit, which helped build consensus and indicate a new path for world economic recovery. 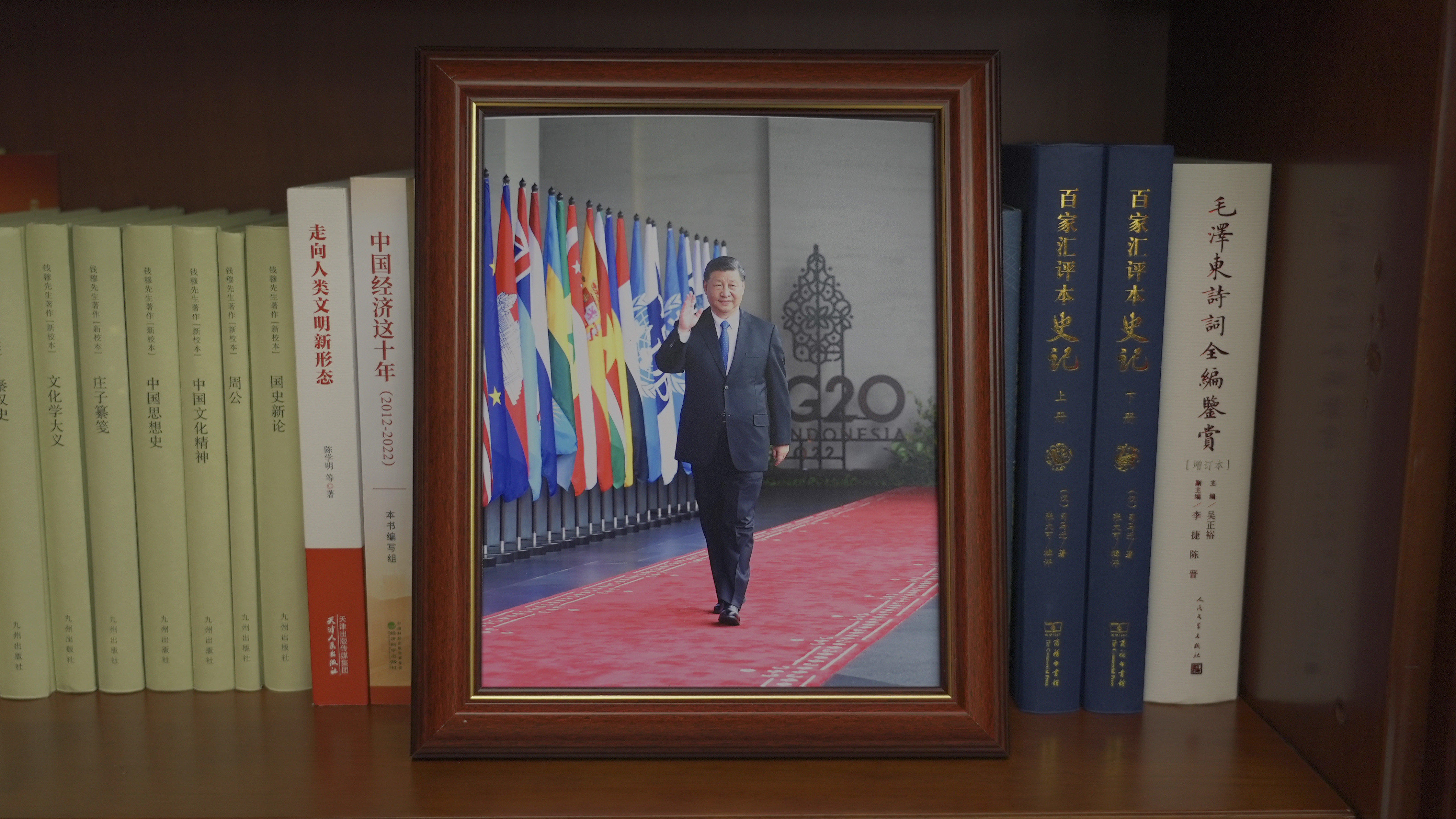 Before Beijing 2022 Winter Olympics and Paralympics review and awards ceremony, President Xi and other State leaders met with representatives of outstanding sports groups and individuals at the Great Hall of the People in Beijing on April 8, 2022. 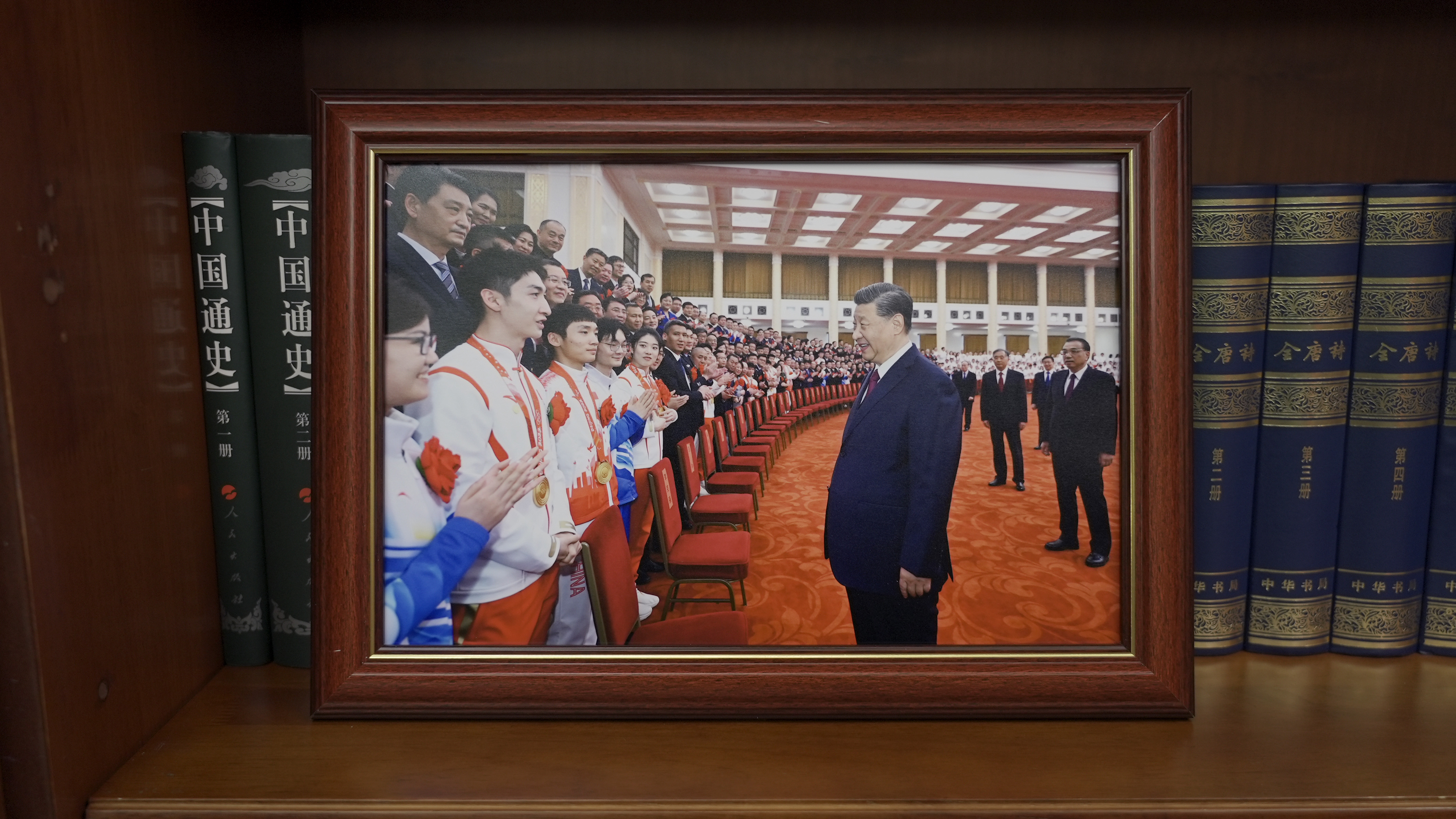 Xi takes photos with the recipients of the August 1 Medal, the highest military award in China, on July 27, 2022, in the capital Beijing. On the day, he also conferred an honorary flag to a military battalion for their outstanding service ahead of the 95th anniversary of the founding of the Chinese People's Liberation Army. 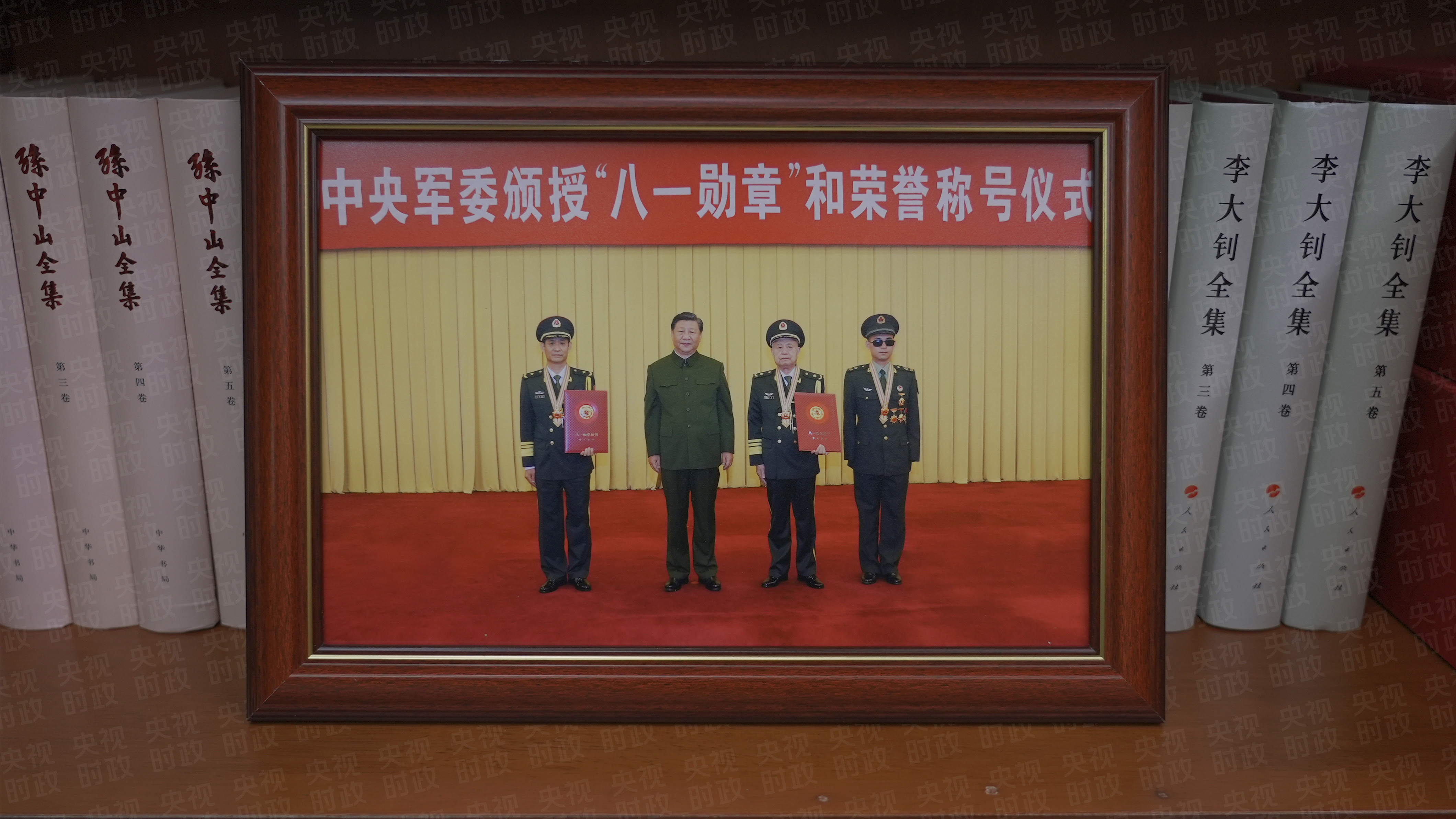 Xi inspected a local village in Turpan, northwest China's Xinjiang Uygur Autonomous Region on July 14, 2022. He visited officials and the general public of different ethnic groups during his four-day inspection. 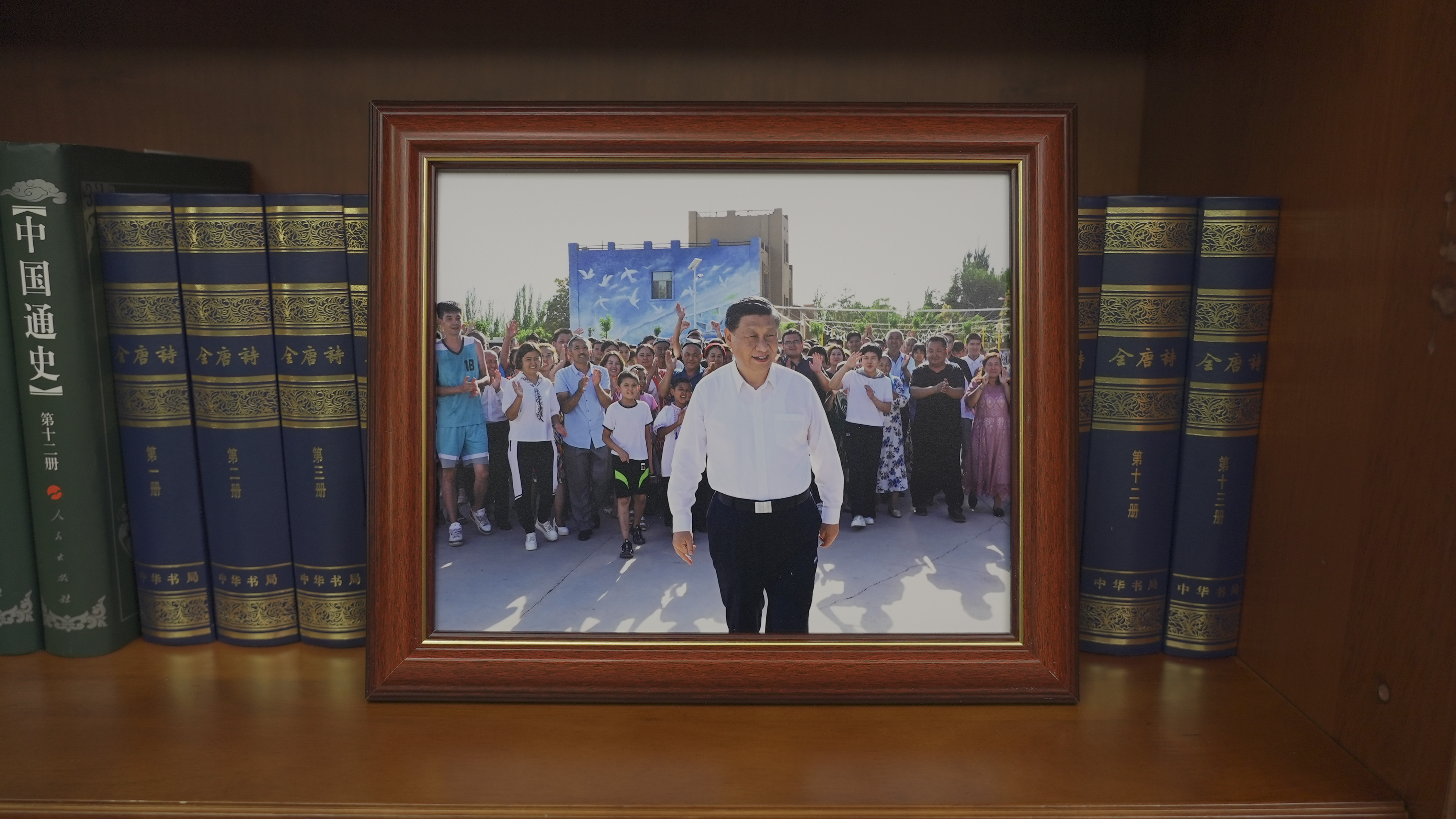 Xi and his wife Peng Liyuan wave to the welcoming crowd upon their arrival in Hong Kong, south China, on June 30, 2022. In the following days, he would attend a meeting celebrating the 25th anniversary of Hong Kong's return to the motherland and the inaugural ceremony of the sixth-term government of the Hong Kong Special Administrative Region (HKSAR) on July 1. He would also inspect the HKSAR. 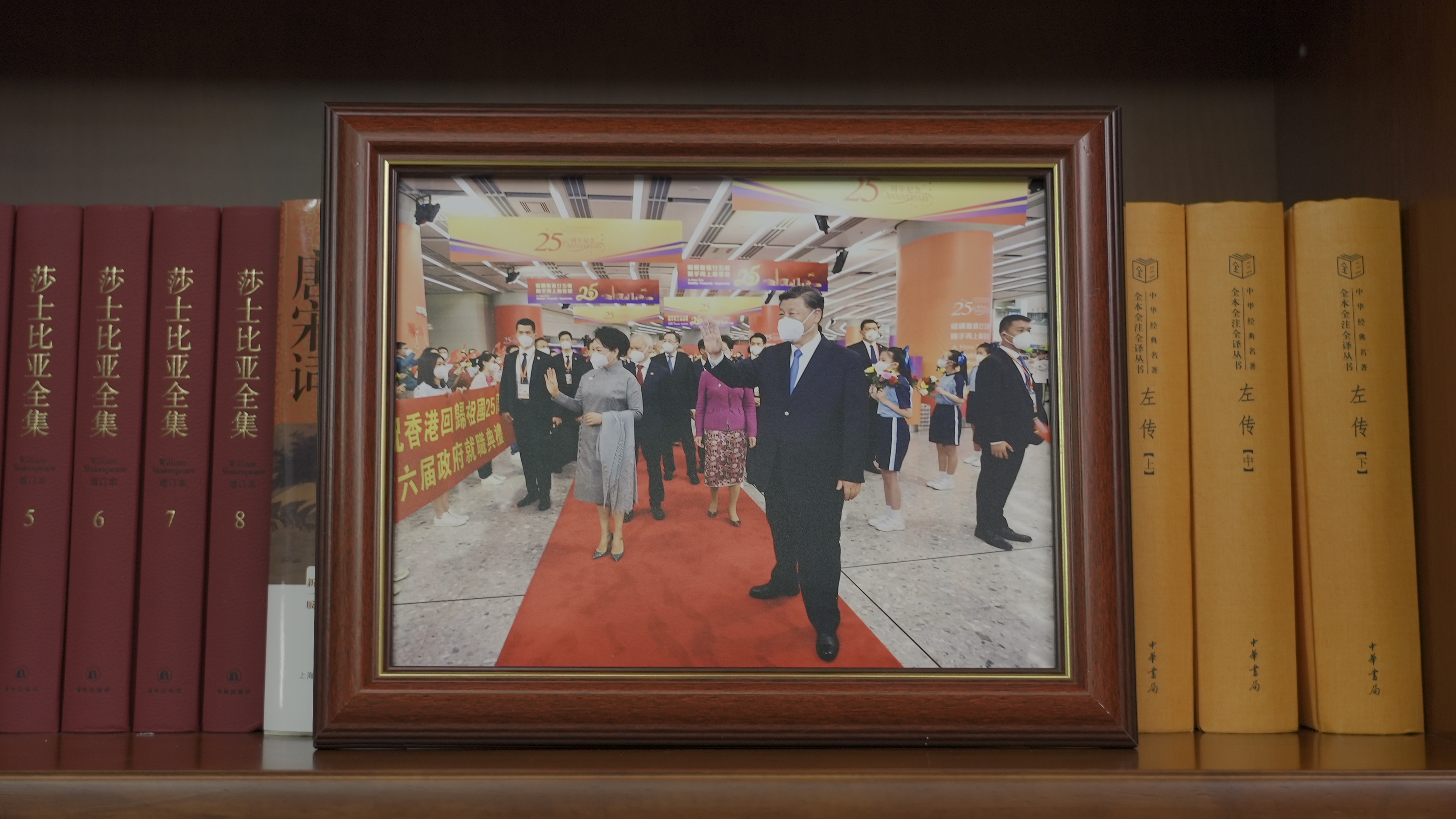 Xi chatted with local villagers in an orchard in Nangou Village of Yan'an, northwest China's Shaanxi Province, on October 26, 2022. He encouraged local villagers to keep working hard and make their lives better and better. 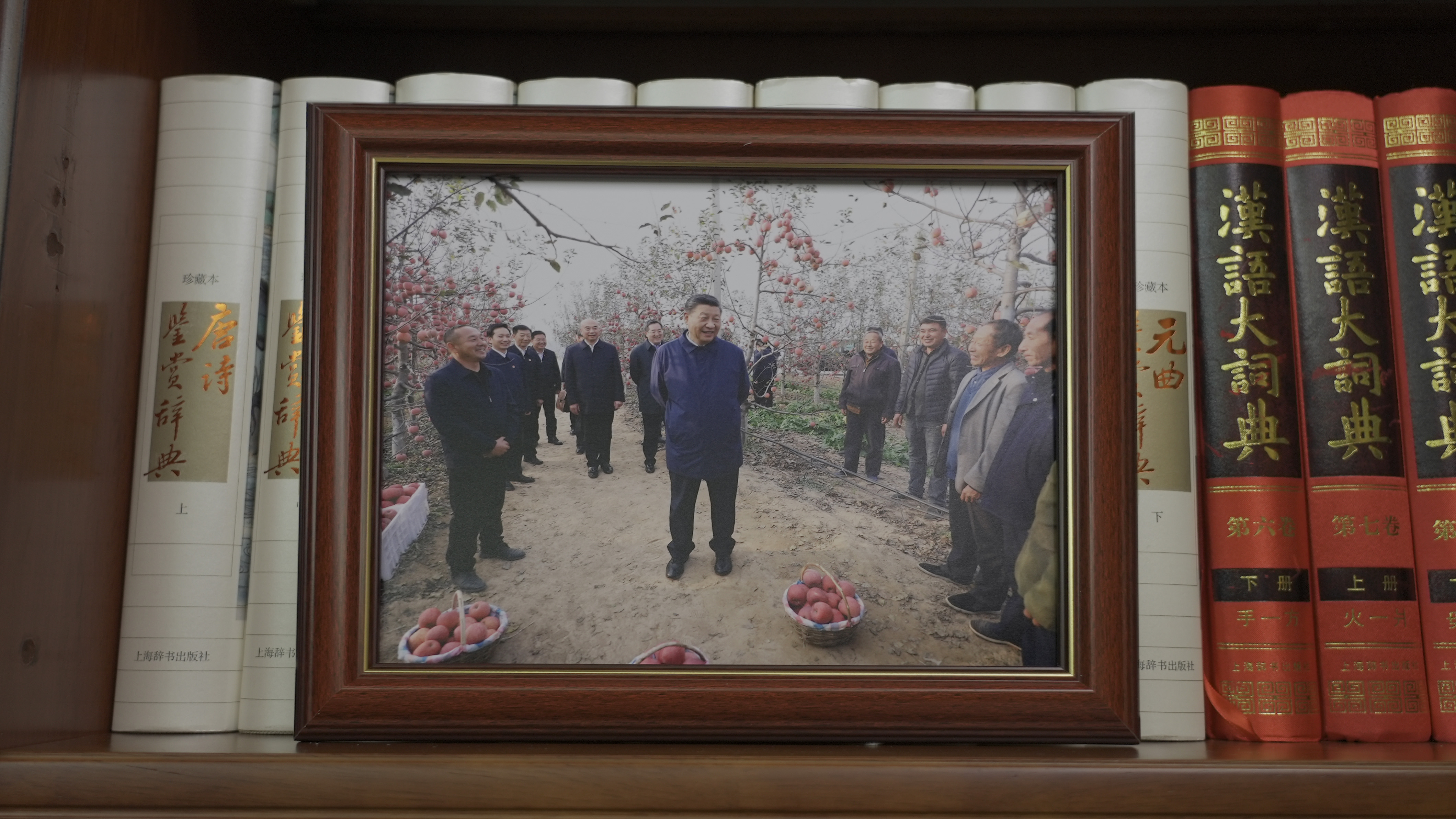 8. Xi visits Renmin University of China ahead of Youth Day

Xi visited Renmin University of China in Beijing on April 25, 2022 ahead of China's Youth Day which falls on May 4. He sounded the clarion call for building world-class universities, and urged students to strive vigorously toward national rejuvenation during the visit. In this photo, he waved to cheering and greeting teachers and students. 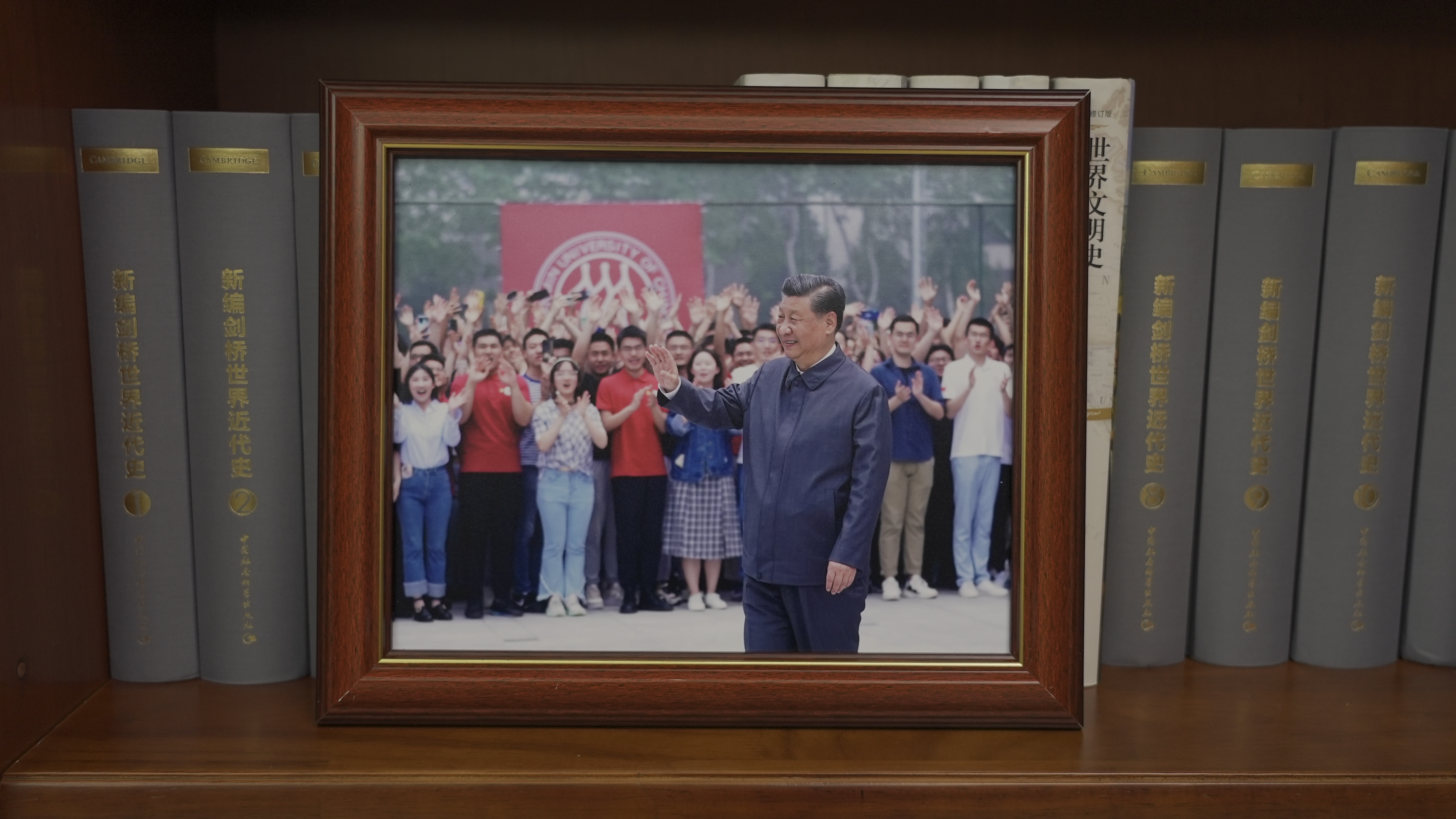 Xi led Li Qiang, Zhao Leji, Wang Huning, Cai Qi, Ding Xuexiang and Li Xi, members of the Standing Committee of the Political Bureau of the CPC Central Committee, to visit Yan'an, an old revolutionary base in northwest China's Shaanxi province on October 27, 2022, less than a week after the conclusion of the 20th CPC National Congress.

When delivering an important speech after visiting an exhibition on the 13 years of the CPC Central Committee at the Yan'an Revolutionary Memorial Hall, Xi stressed the importance of promoting the great founding spirit of the Party and the spirit of Yan'an, and striving in unity to fulfill the goals and tasks set by the 20th CPC National Congress. 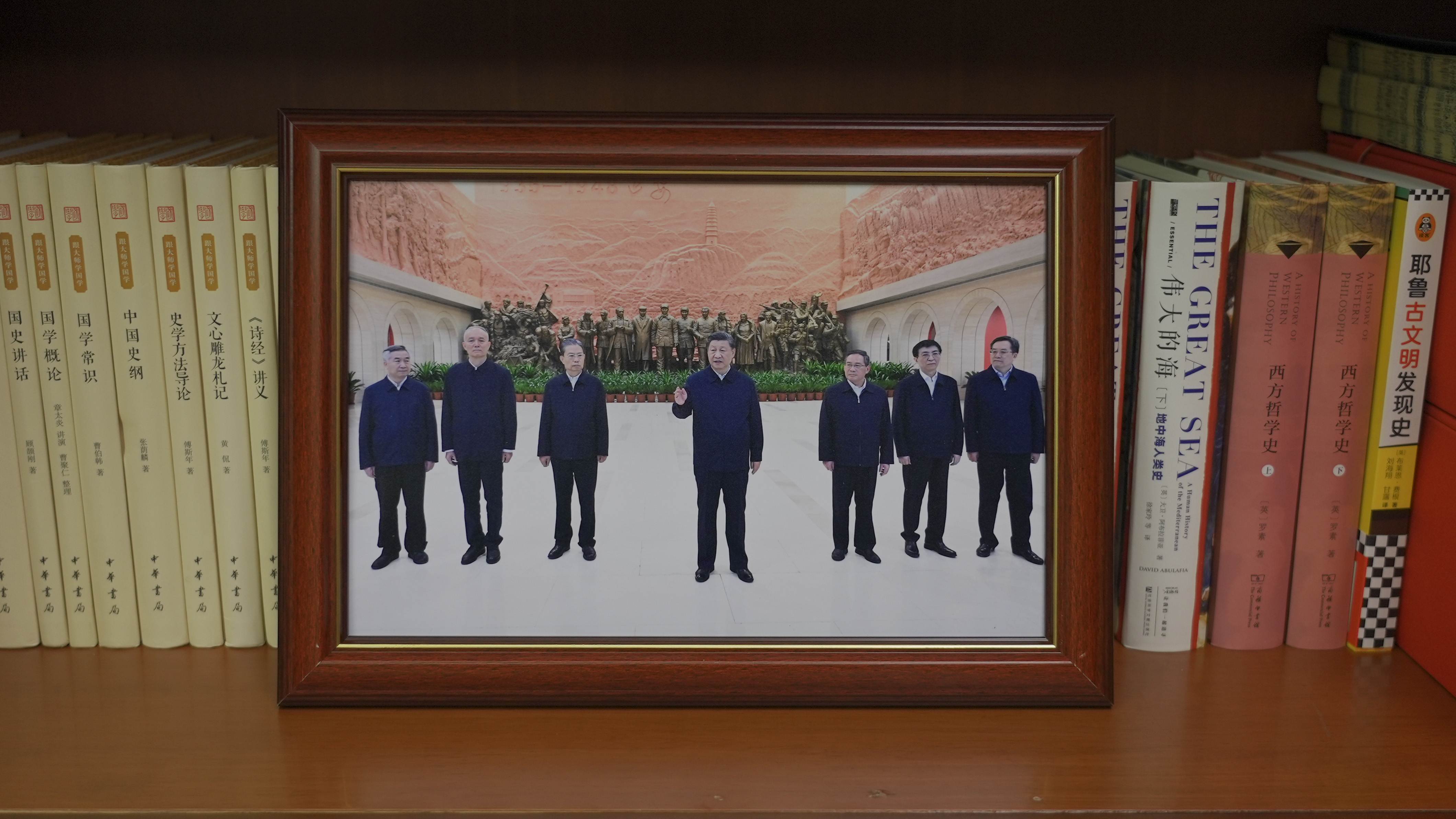 Xi talked with villagers in Duancun Village, Sengnian Township of Fenxi County, north China's Shanxi Province on January 26, 2022, days ahead of the Spring Festival, or the Chinese New Year. During the visit, he extended festival greetings to all Chinese people. 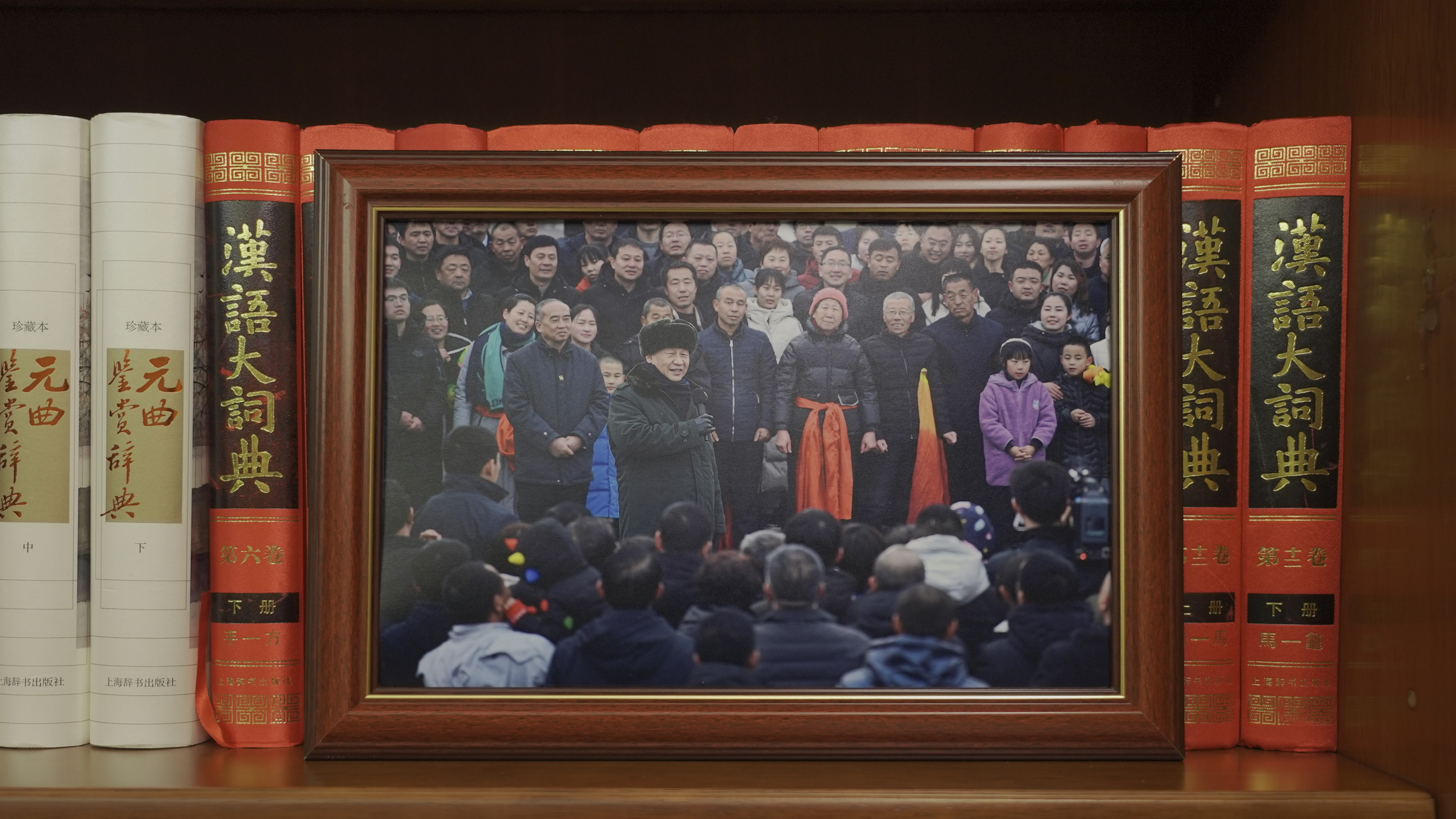 Xi, on behalf of the 19th Central Committee of the CPC, delivered a report titled Hold High the Great Banner of Socialism with Chinese Characteristics and Strive in Unity to Build a Modern Socialist Country in All Respects to the 20th National Congress of the CPC, which opened at the Great Hall of the People in Beijing on October 16, 2022. 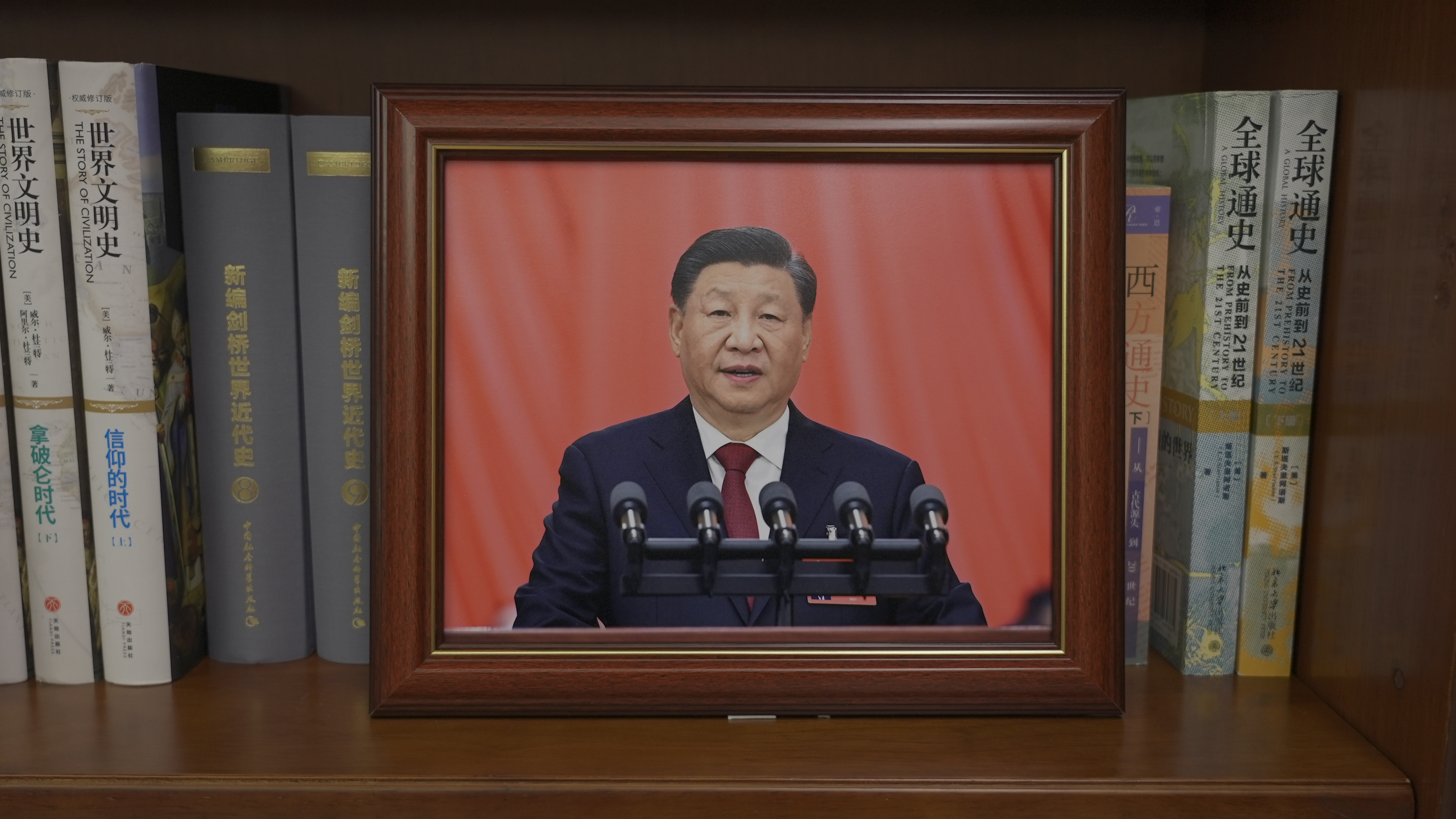 This photo was first seen on Xi's bookshelf during last year's New Year Address. In this photo, Xi's wife Peng Liyuan posed with a piano. 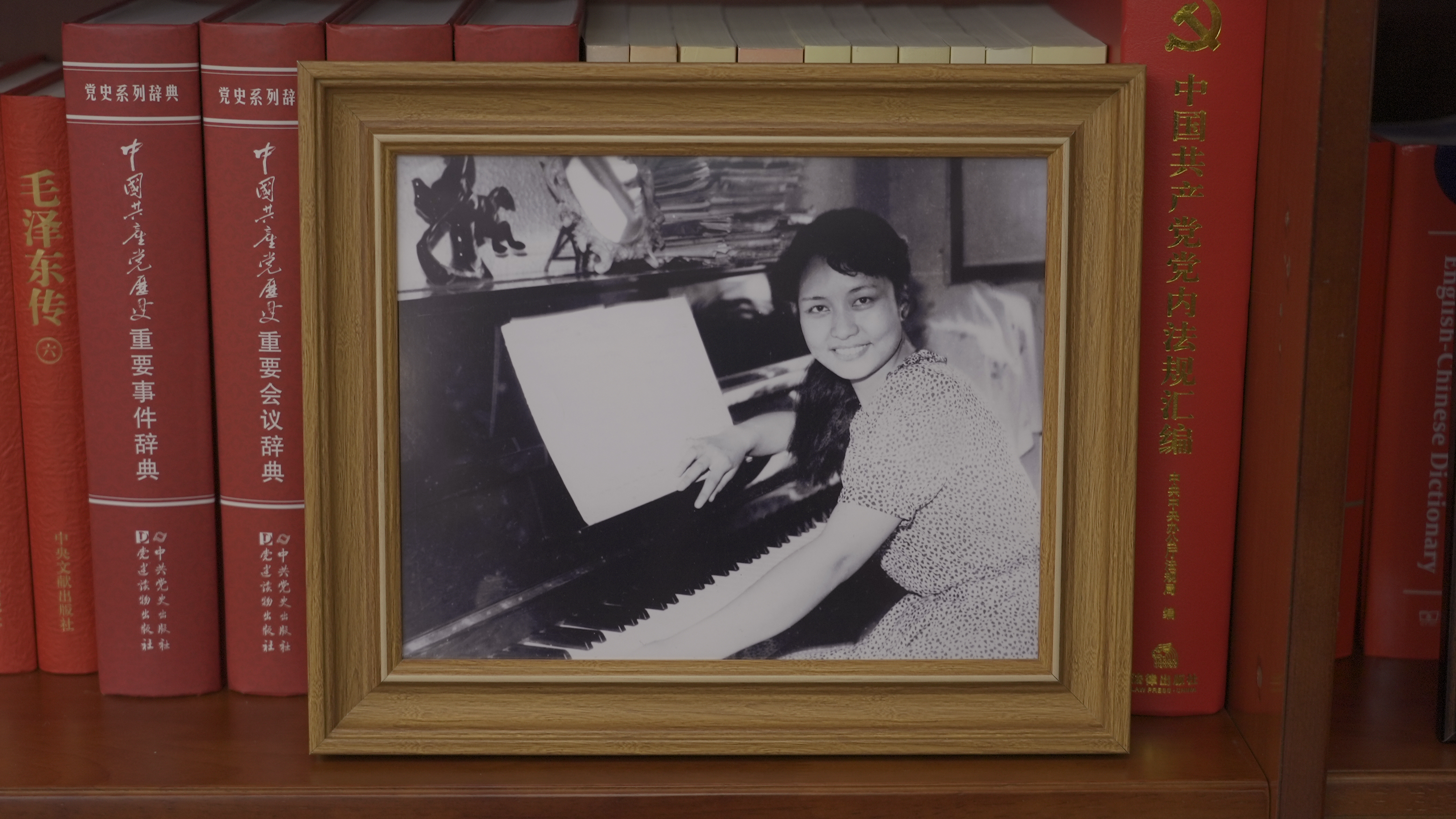 This photo first showed on President Xi's bookshelf at his 2022 New Year Address. This is the second year we see it on the shelf. In this photo, Xi and his wife Peng Liyuan posed with his father Xi Zhongxun and his mother Qi Xin. 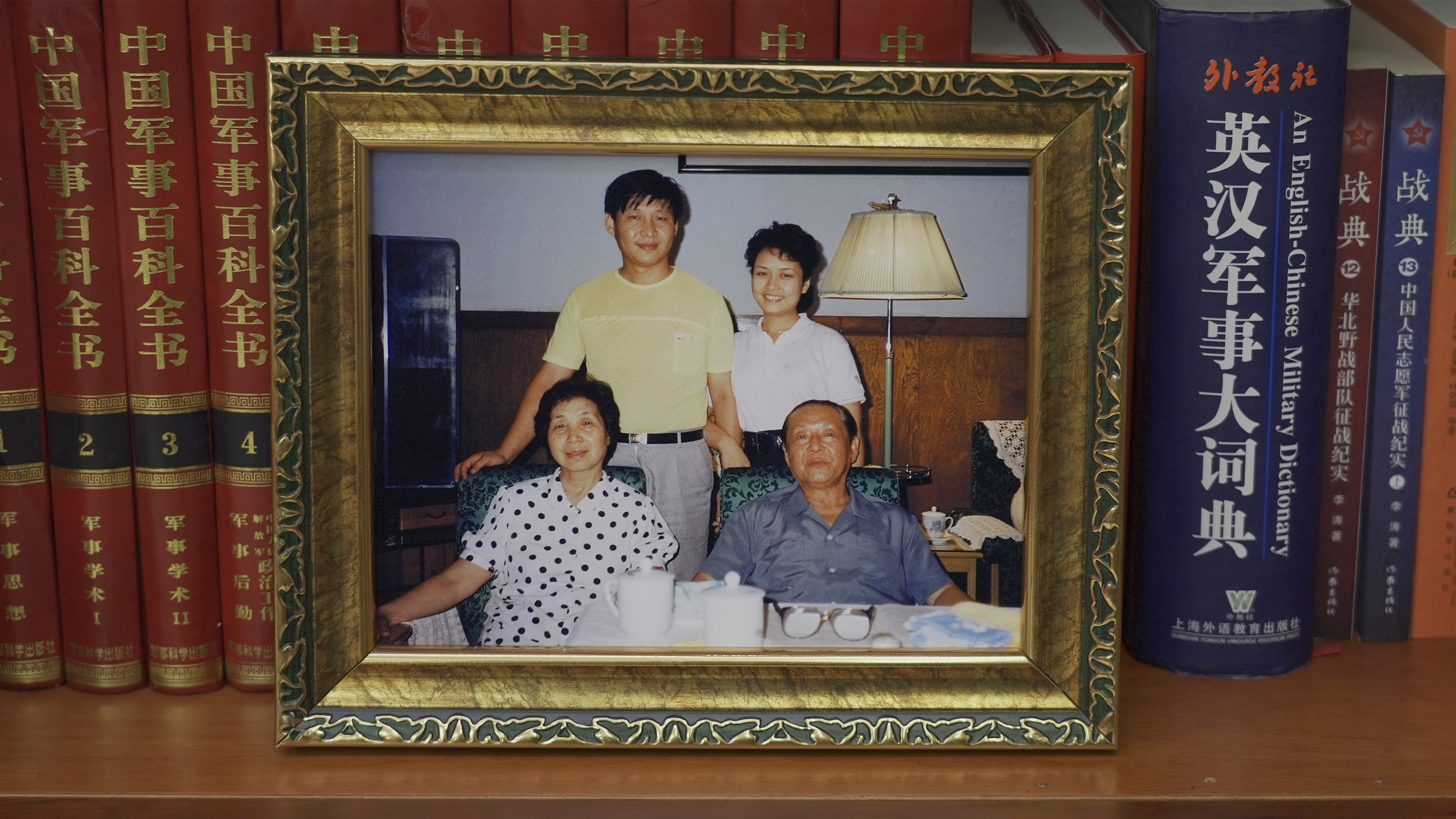 14. Xi helps his father in a wheelchair

Xi was pictured helping his father who was sitting in a wheelchair while Xi's wife and daughter walked alongside. The picture has been put on his bookshelf since Xi delivered his first New Year address in 2013. 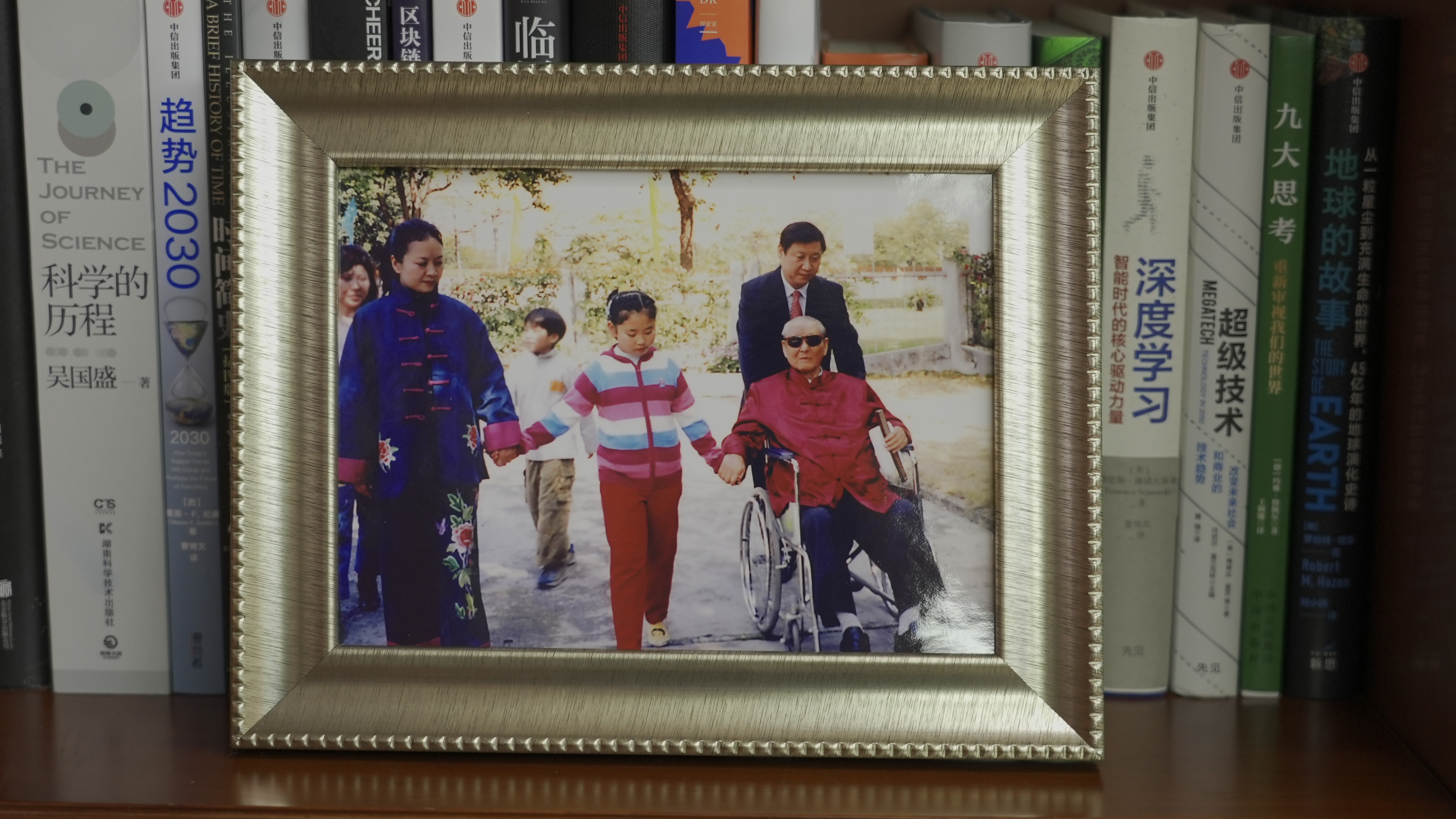 15. The father and daughter

Xi took his daughter on a bicycle ride when he worked in Fuzhou City, east China's Fujian Province. This photo has been on Xi's bookshelf since he delivered his first New Year address in 2013. 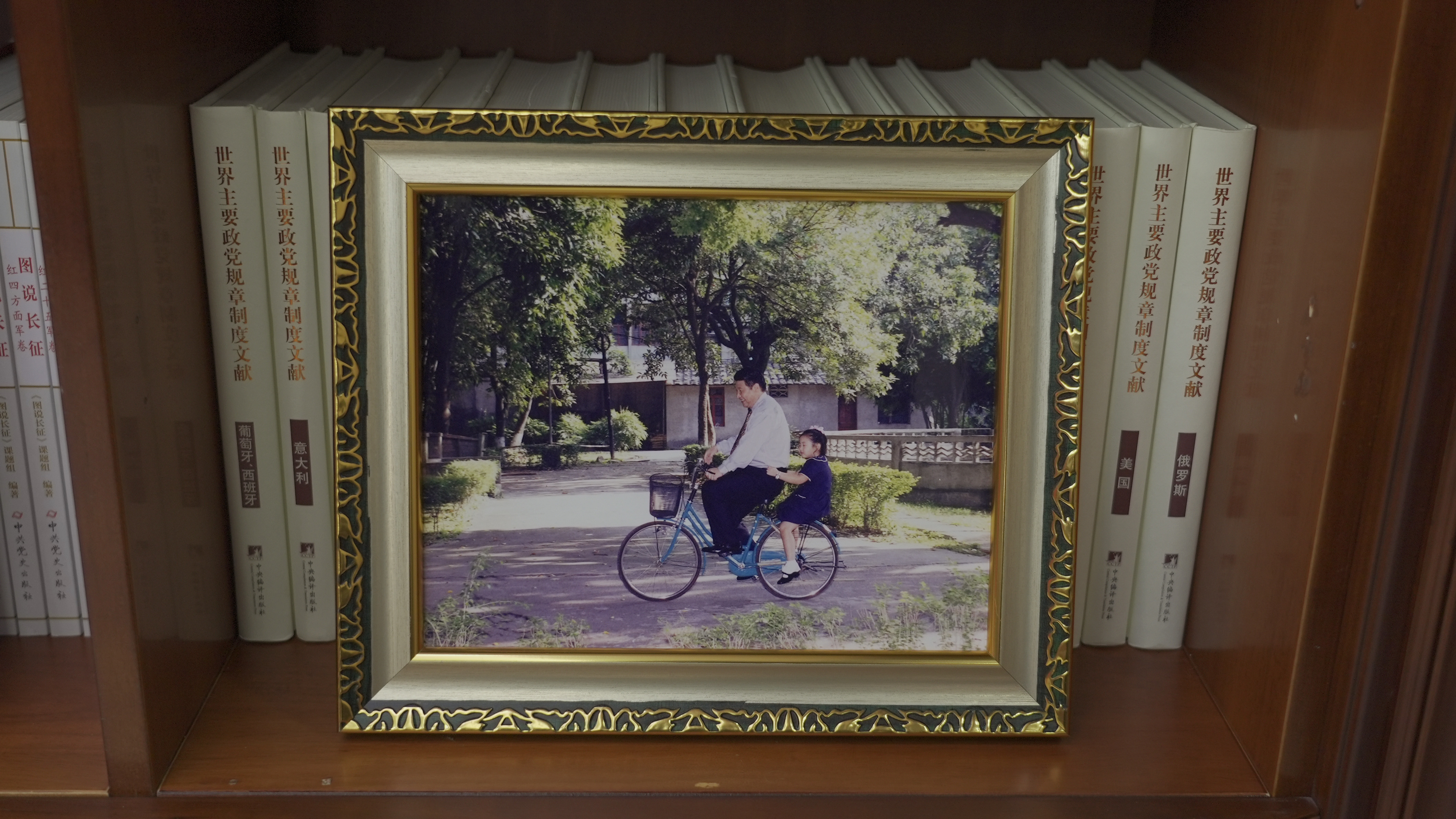 In this photo, Xi posed with his father Xi Zhongxun in Sanya City, south China's Hainan Province, in 1979. At that time, Xi studied at Tsinghua University and often visited his father during holidays. This photo was first put on President Xi's bookshelf in the 2020 New Year Address. 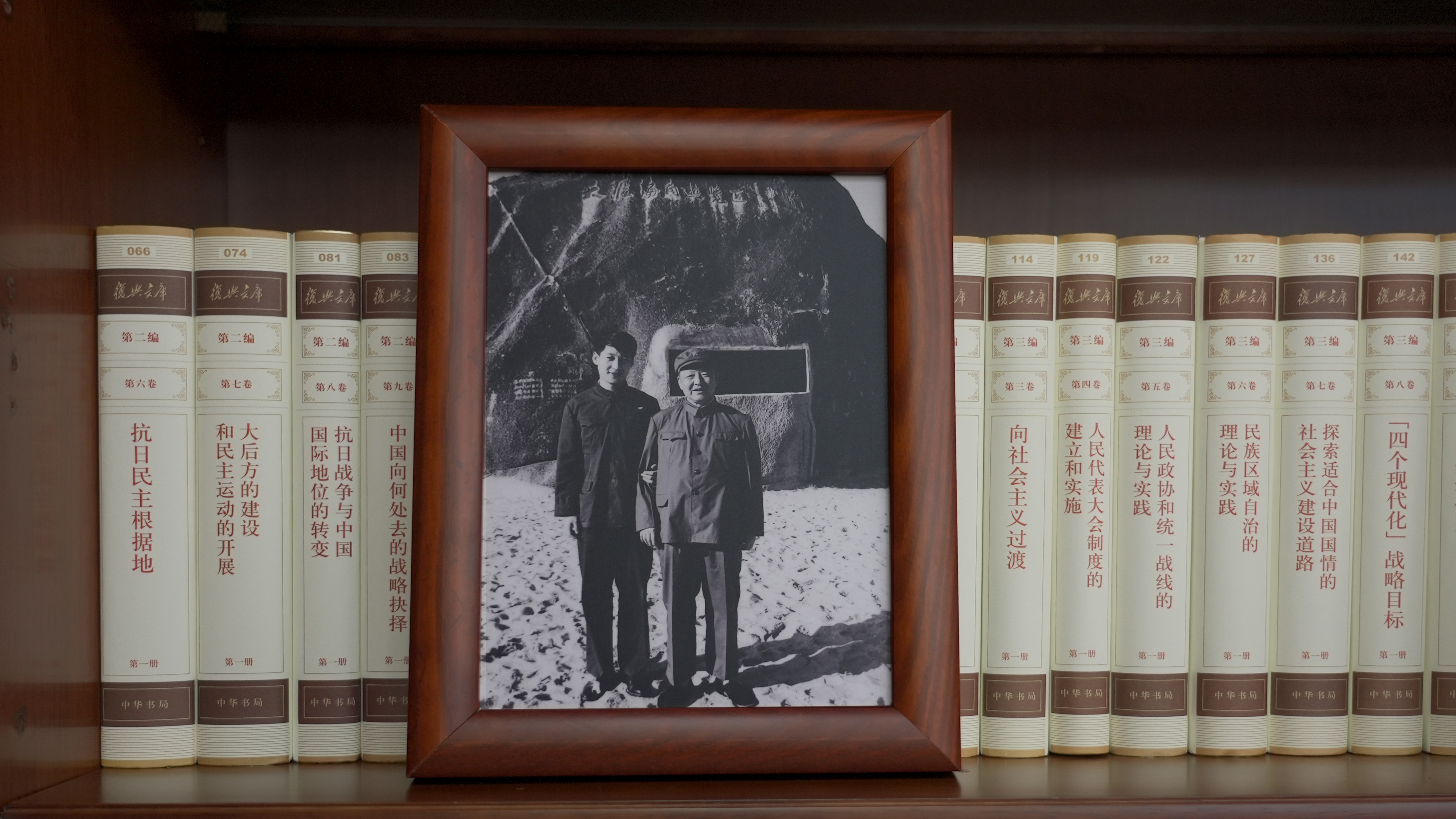 17. Xi and his wife pose with his mother

Xi and his wife Peng Liyuan supported Xi's mother Qi Xin from both sides in this photo. This photo made a debut on President Xi's bookshelf at the 2021 New Year address. Xi always keeps in mind the traditional Chinese merits that Chinese people cherish their families and care for their parents. 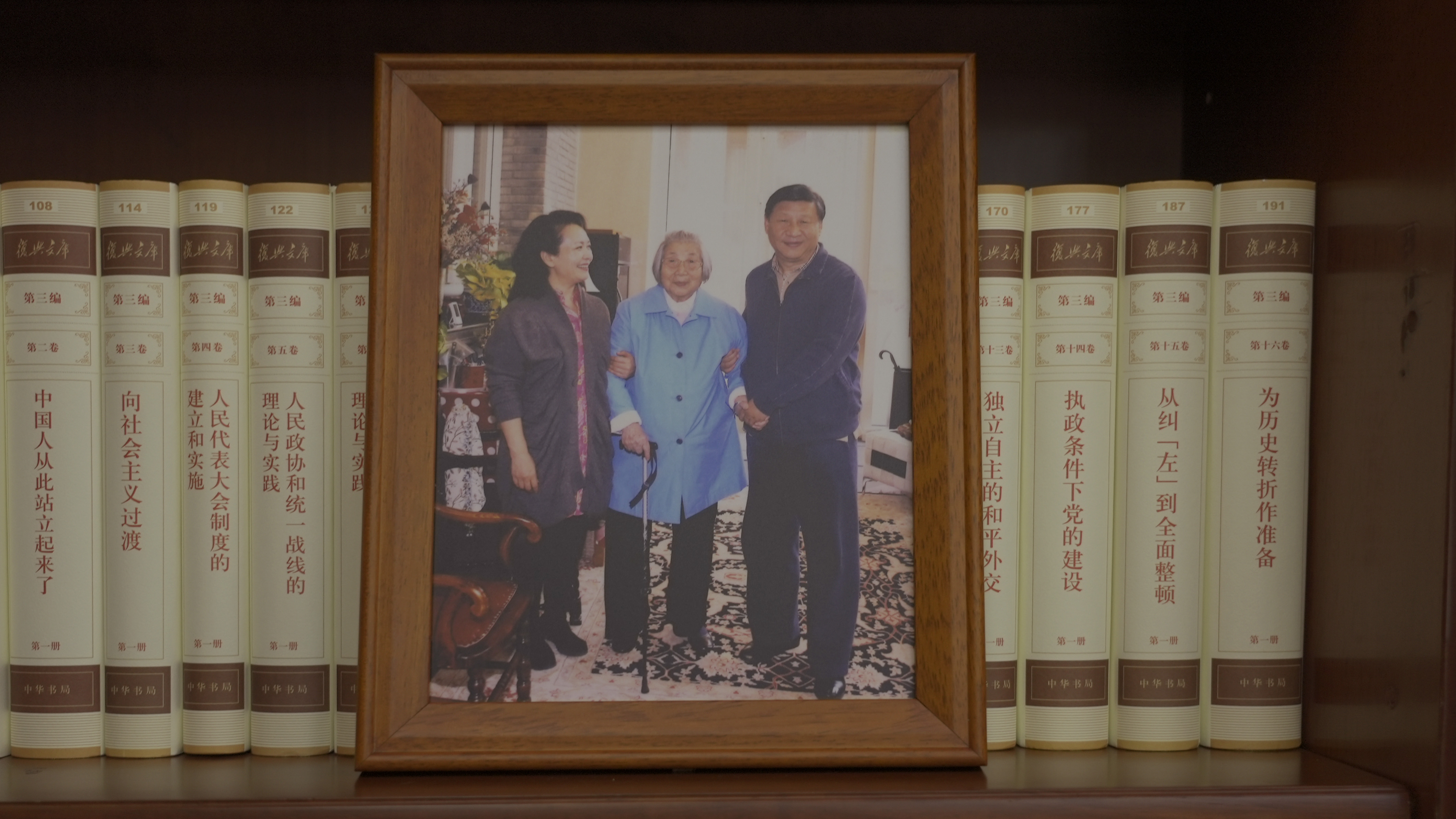 18. Xi, his wife and their daughter

The photo of Xi, his wife and their daughter made a debut on his bookshelf in the 2021 New Year address. Xi paid high attention to family tradition and family education and has stressed family education on many occasions. 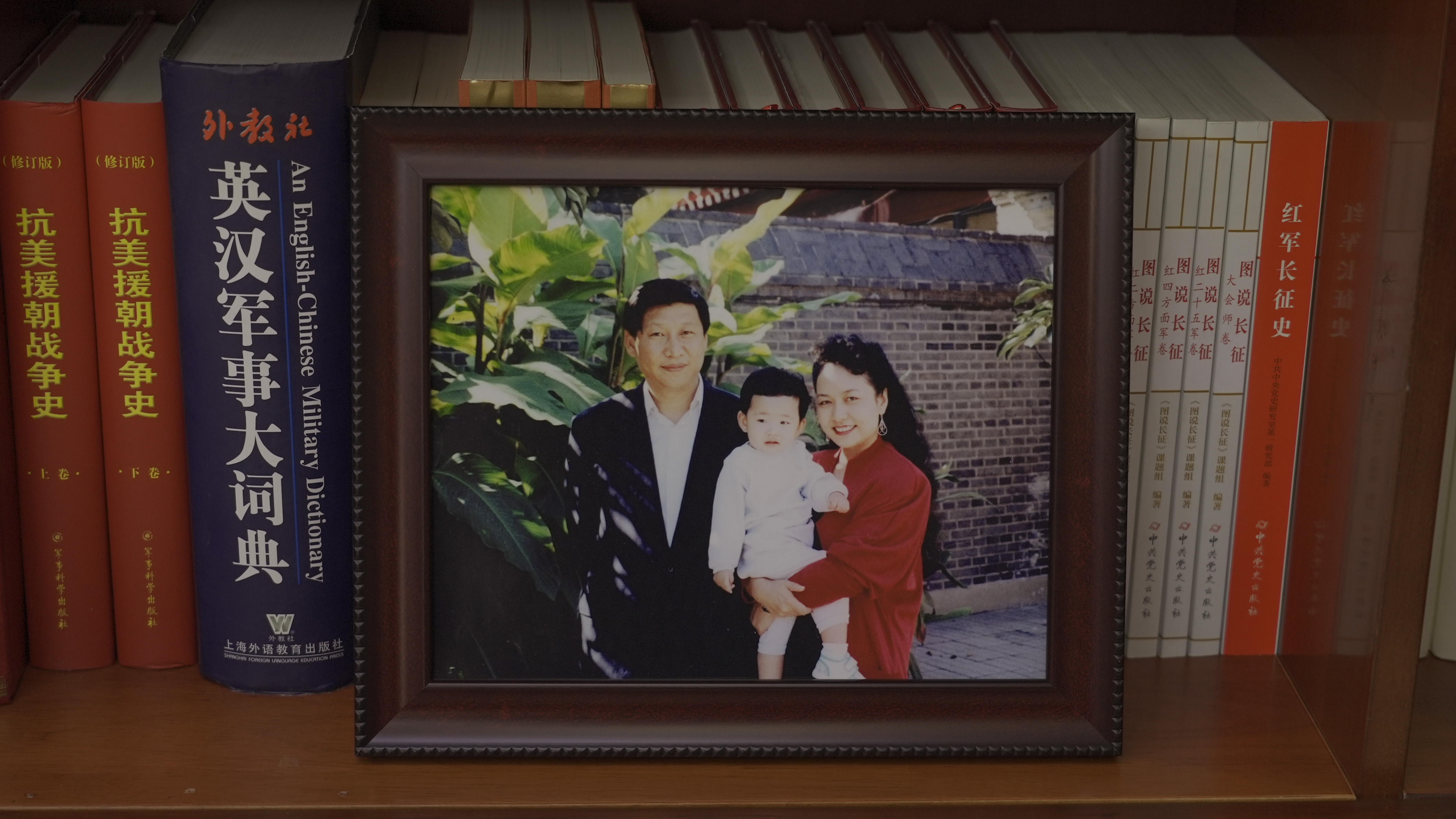 Xi and his daughter held hands and stood together in this picture, which is the debut of the photo on his bookshelf at the 2023 New Year Address. 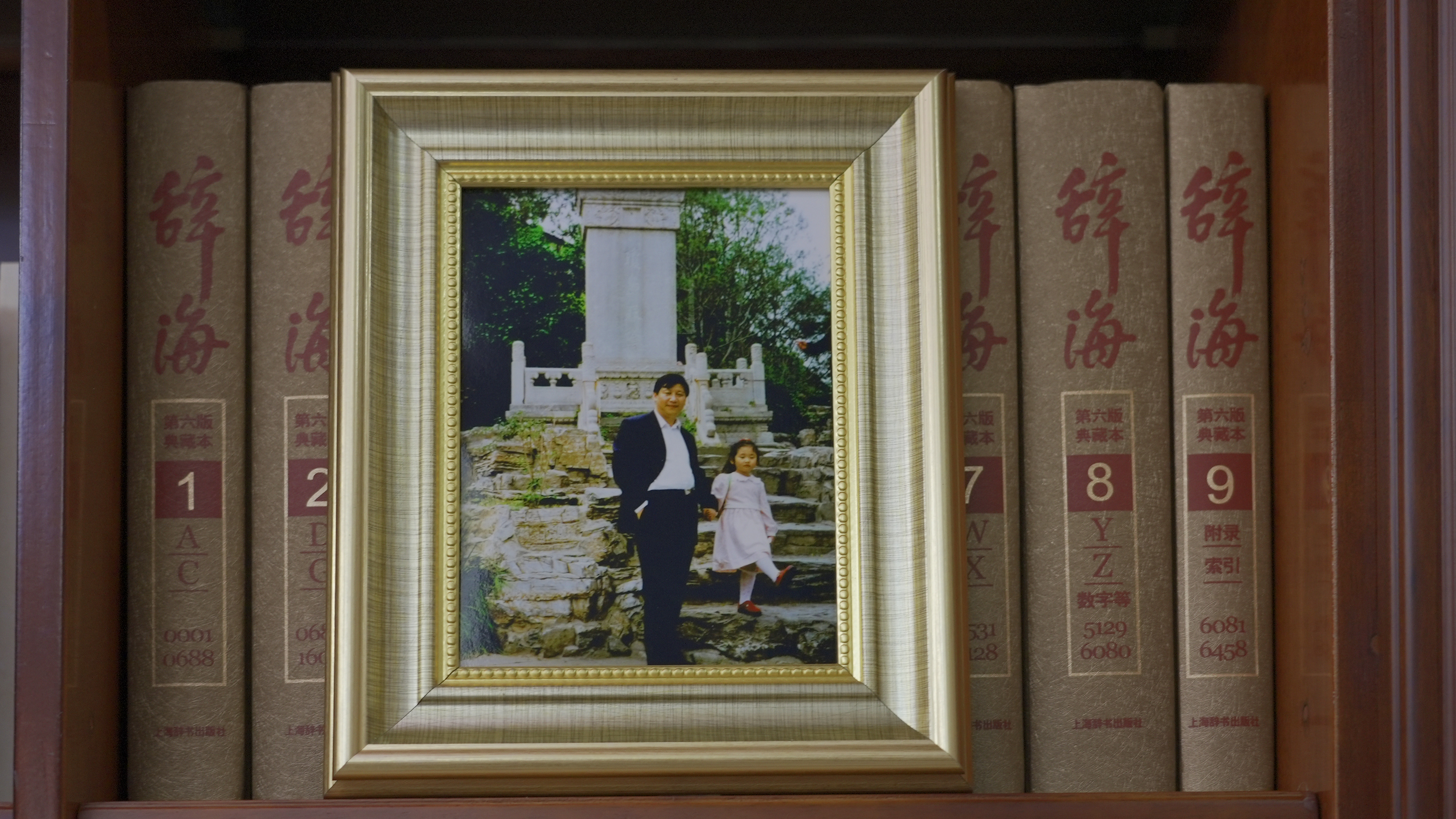 Xi held his daughter in his arms, which is the debut of the photo on his bookshelf at the 2023 New Year Address. 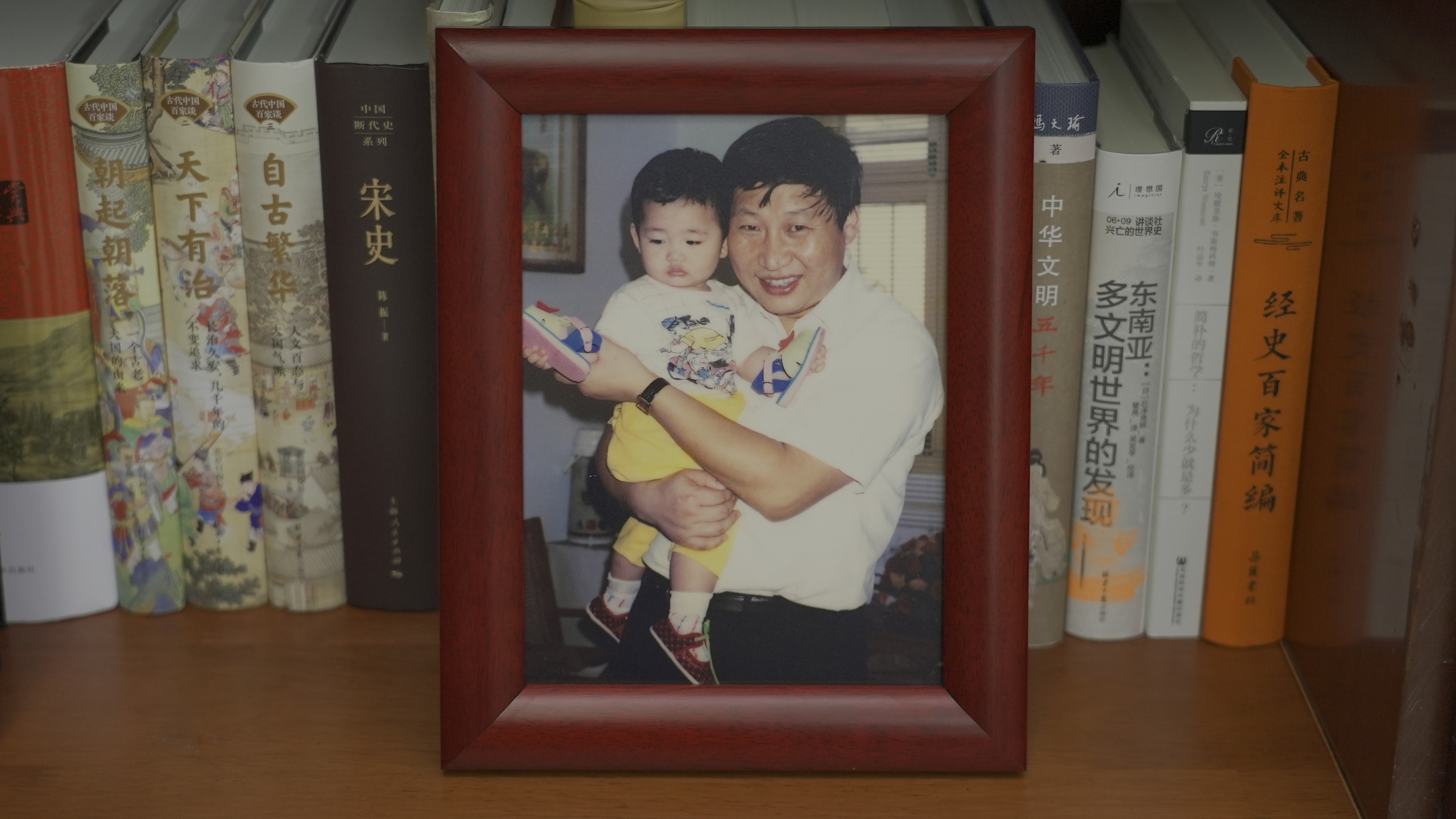 21. Xi and his wife behind flowers

Xi and his wife Peng Liyuan stood behind flowers and posed for a photo. This picture made the debut on his bookshelf at the 2023 New Year Address. 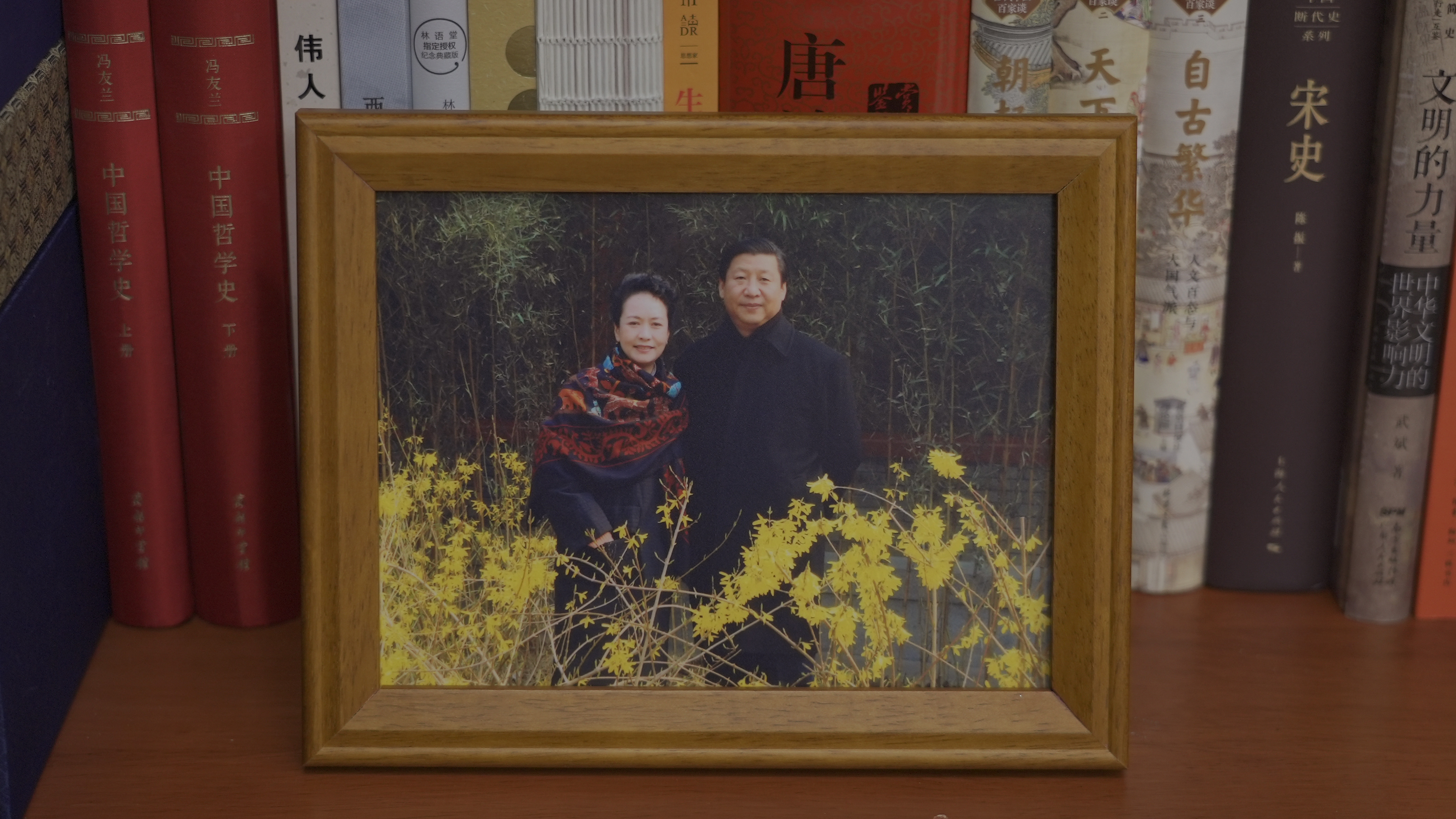 22. Xi poses with his wife at Old Summer Palace

In this photo, Xi posed with his wife Peng Liyuan before Dashuifa (Great Fountains) in Old Summer Palace. This photo showed on President Xi's bookshelf in his 2021 New Year Address. 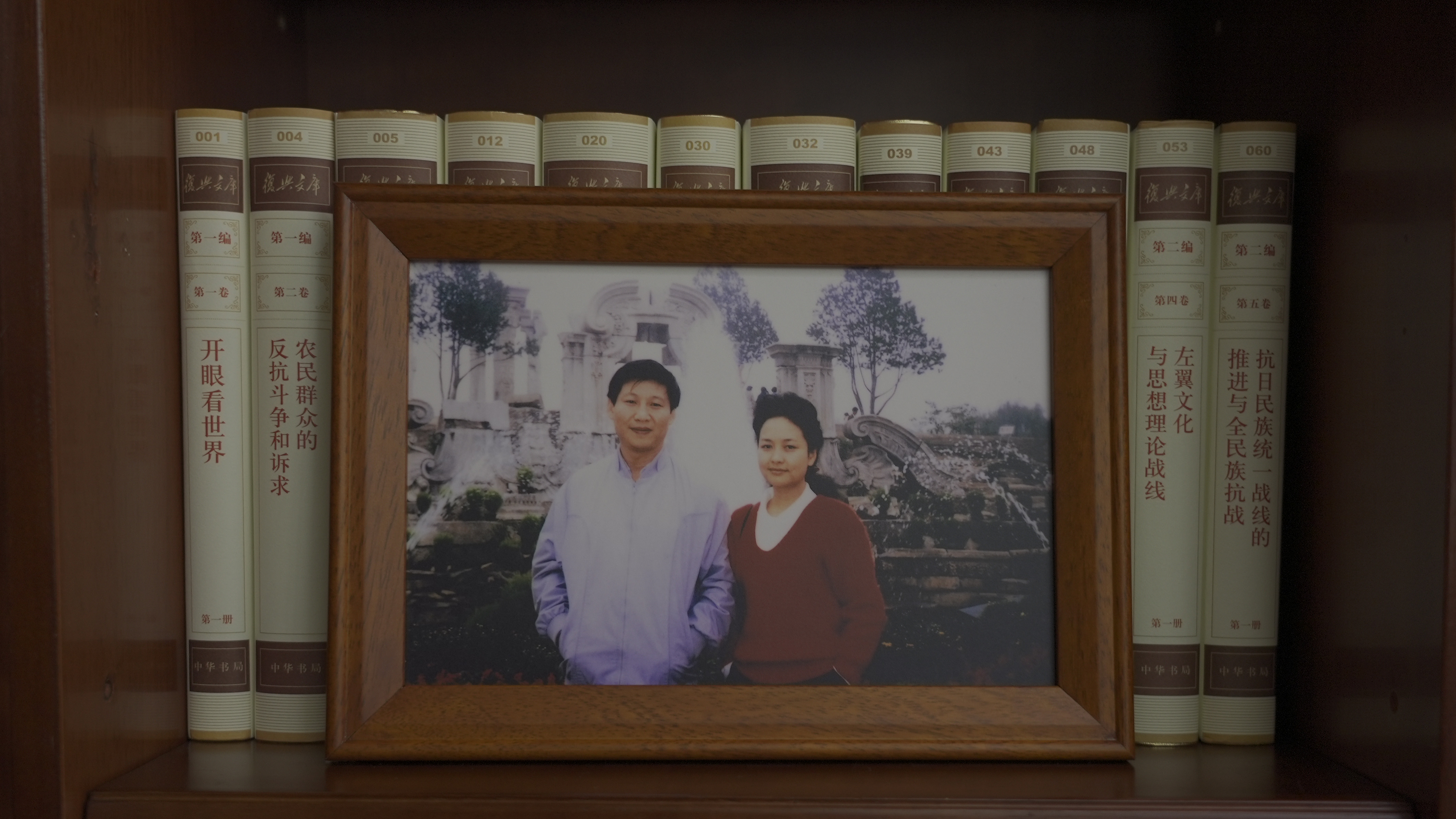 In this photo, Xi worked at the Central Military Commission in 1979. This photo had appeared at his last year’s New Year Address. 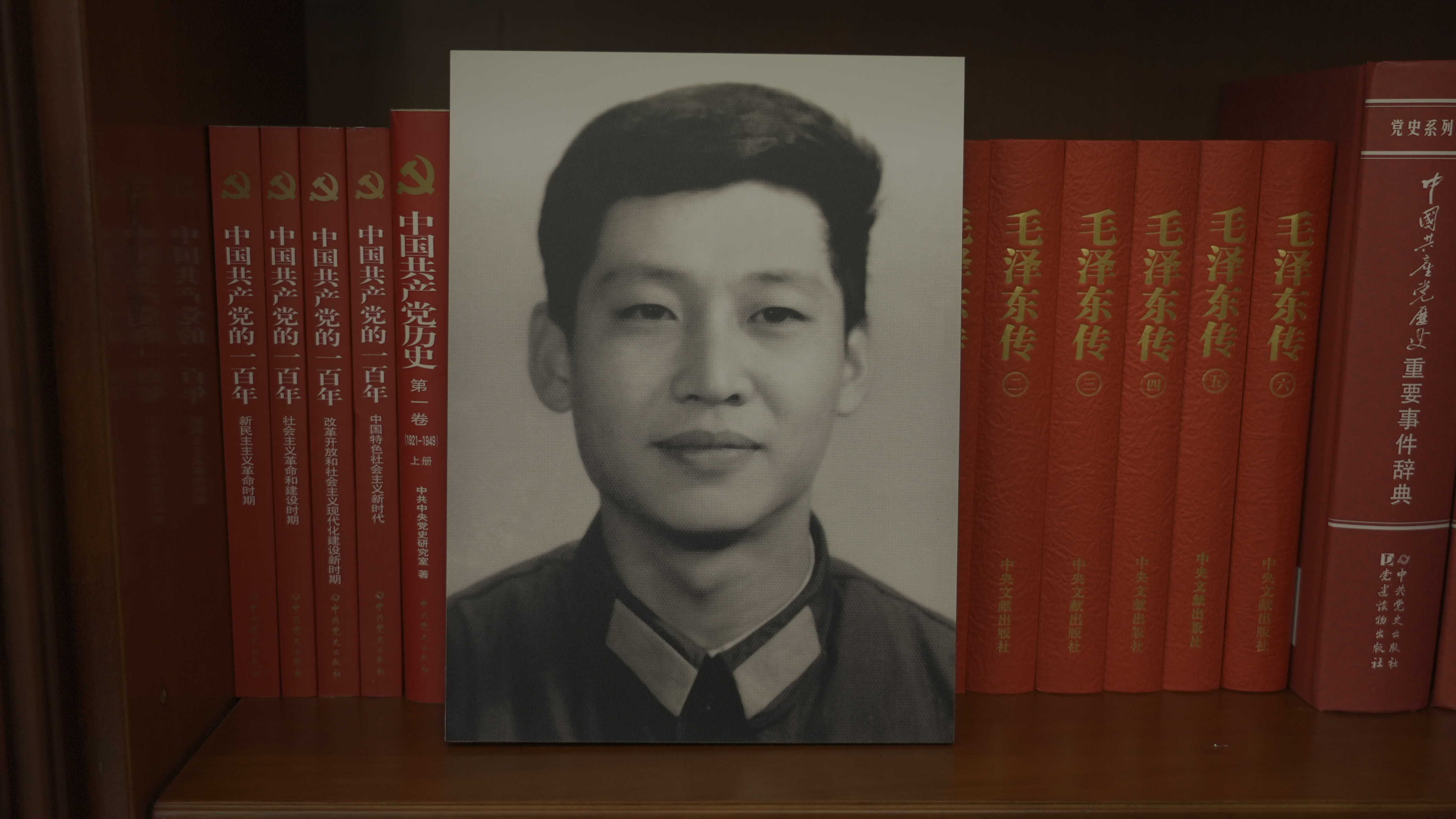 This photo of Xi posing alongside bamboo made the debut on his bookshelf at the 2023 New Year Address. 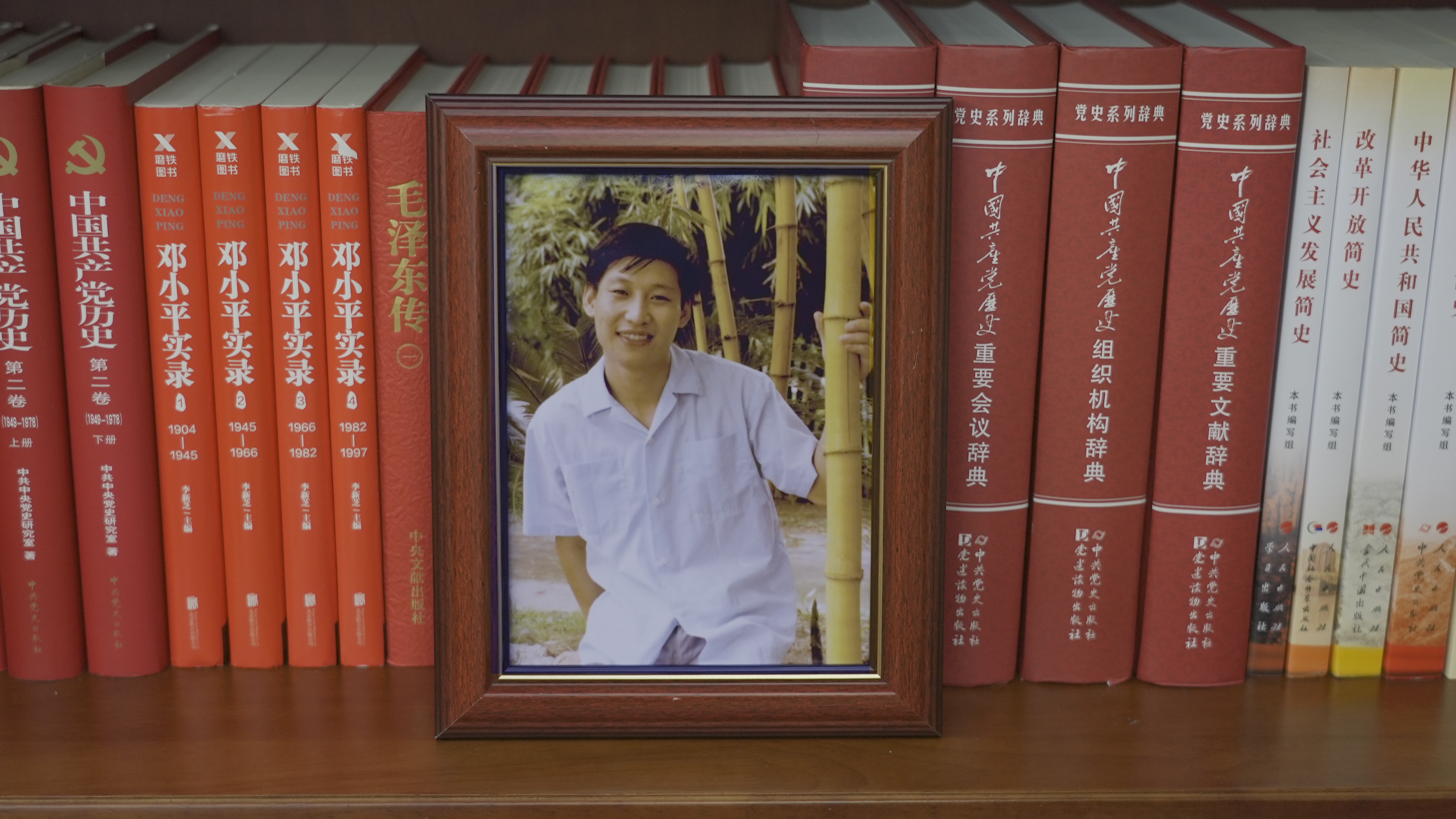 This photo of Xi posing in a chair near a lake made the debut on his bookshelf at the 2023 New Year Address. 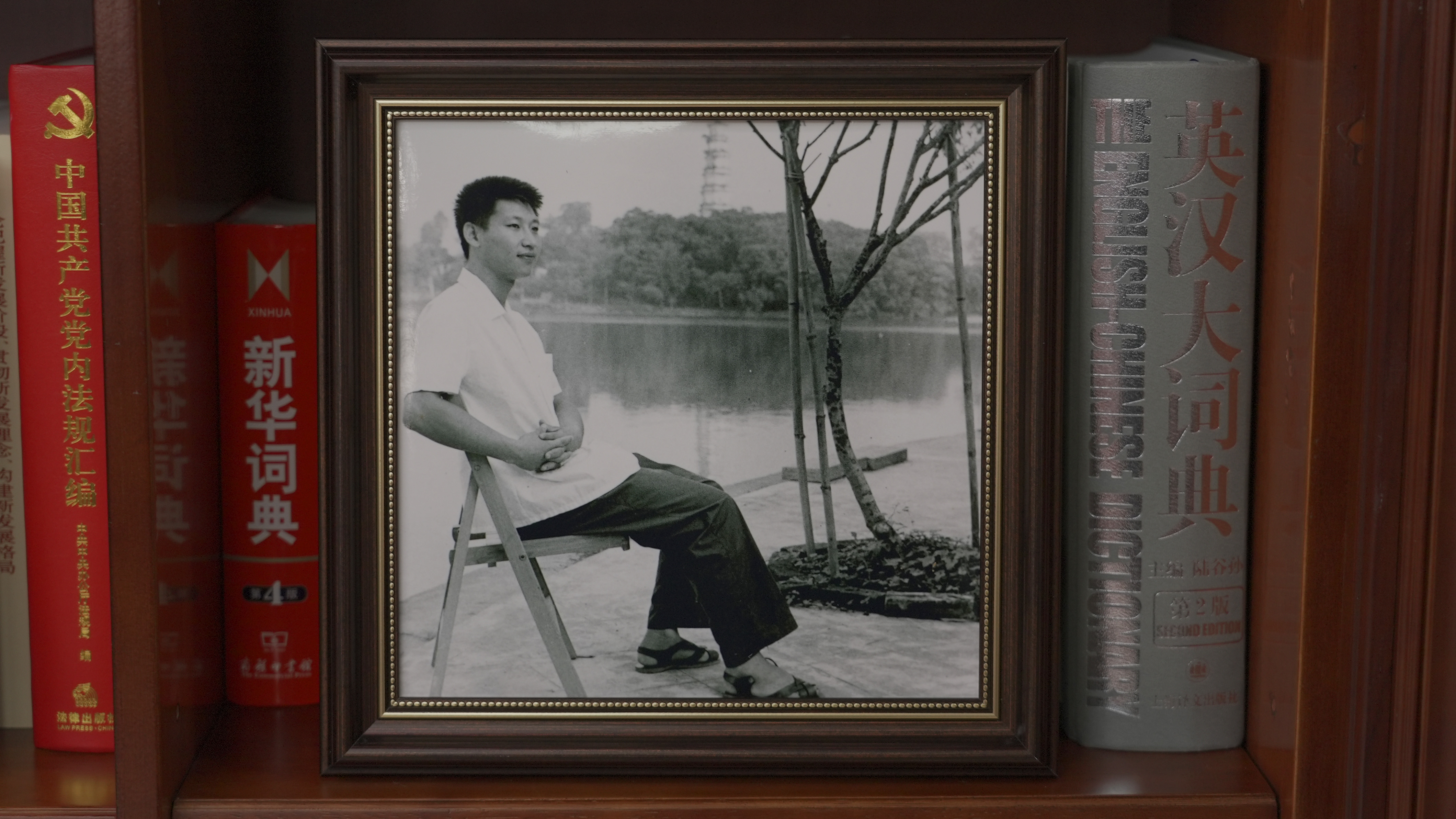 26. Xi's father at a reception celebrating the 50th anniversary of the founding of the People's Republic of China

This photo was taken on September 30, 1999, showing Xi Zhongxun, Xi's father, Jiang Zemin and Zhu Rongji raising glasses at the reception celebrating the 50th anniversary of the founding of the People's Republic of China. This photo made the debut on Xi's bookshelf at the 2023 New Year Address. 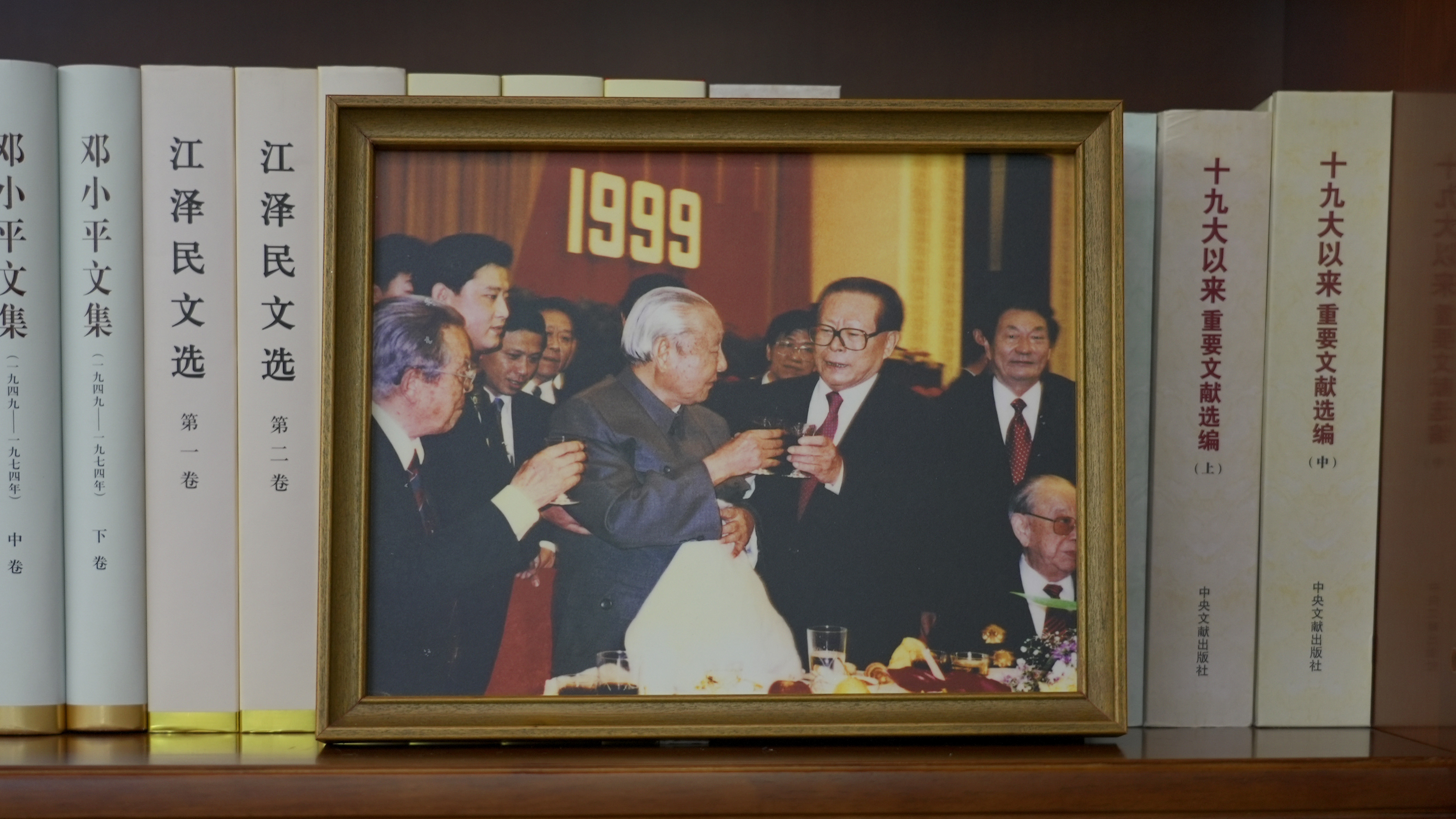 Xi Jinping, Jiang Zemin and Hu Jintao posed for a photo. This picture made the debut on his bookshelf at the 2023 New Year Address. 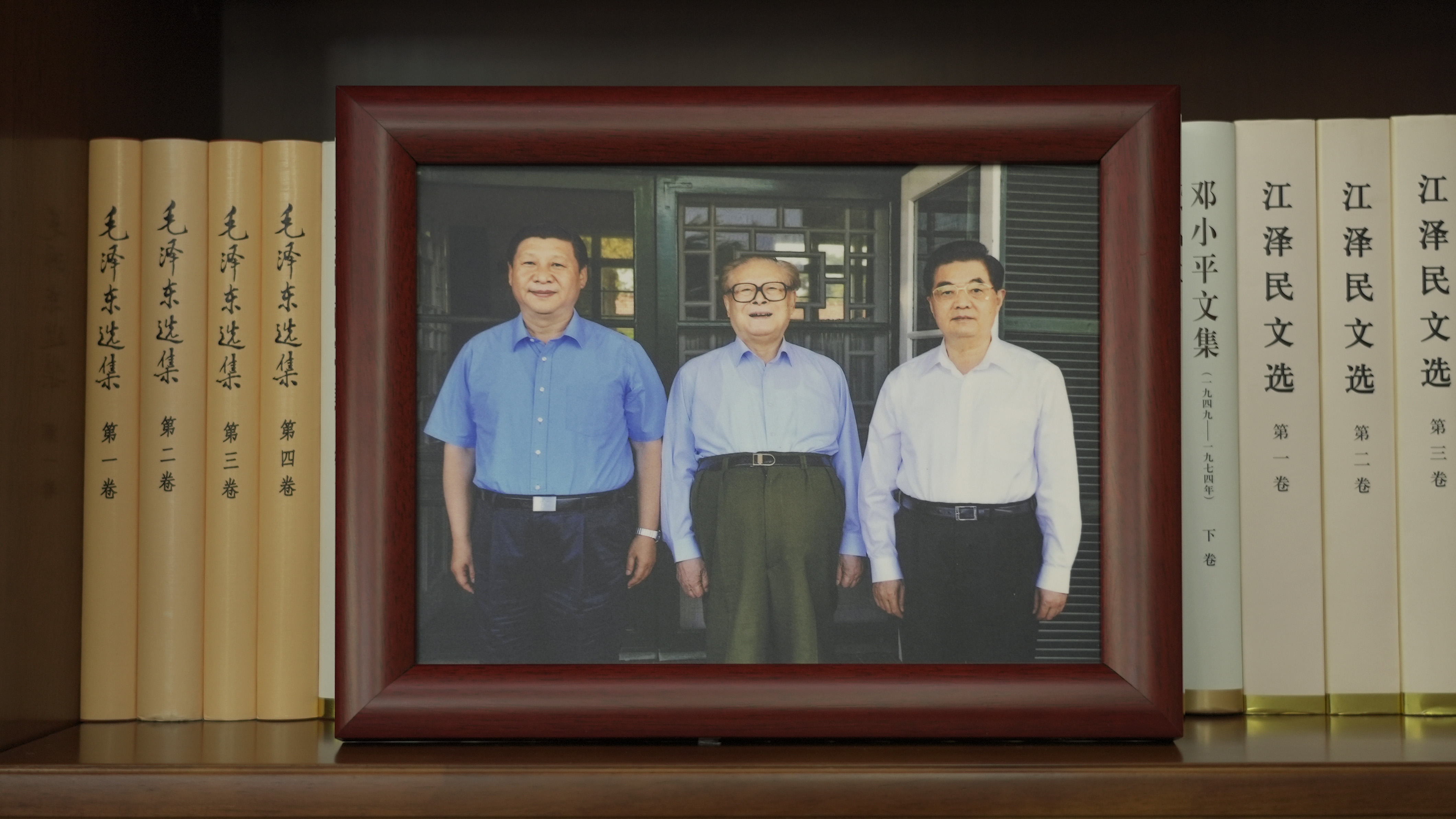