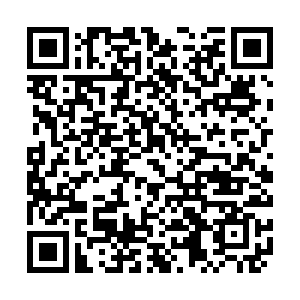 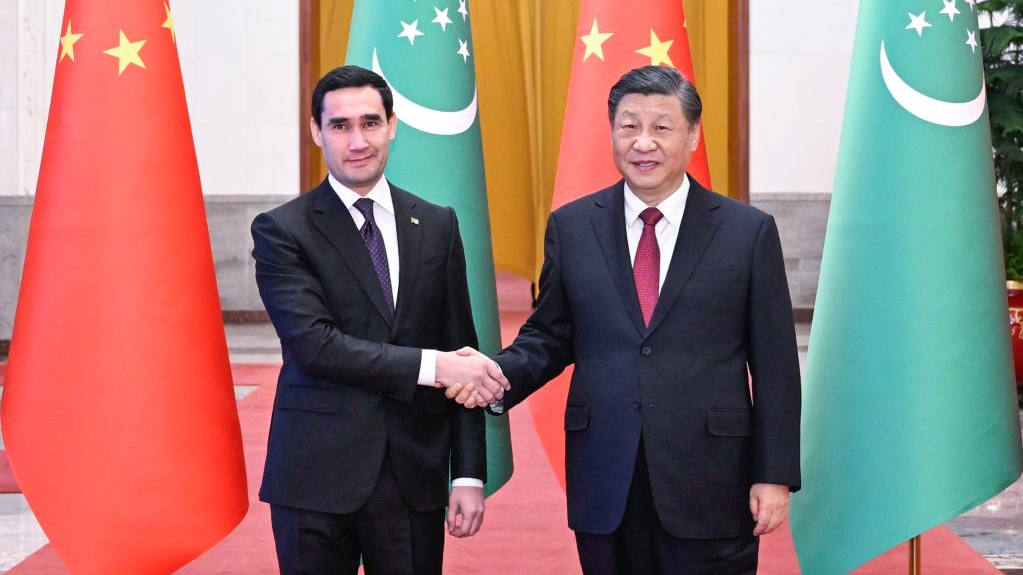 Turkmenistan is one of the biggest suppliers of natural gas to China and a key country of the China-Central Asia Gas Pipeline project.

Till June 2022, the China-Central Asia Gas Pipeline has delivered more than 400 billion cubic meters of natural gas to China over the last 12-plus years, according to PipeChina West Pipeline Company.

"Natural gas cooperation is the cornerstone of China-Turkmenistan relations, and greater cooperation in this area serves the strategic and long-term interests of both countries," Chinese President Xi Jinping told visiting Turkmen President Serdar Berdimuhamedov, calling for expanding energy cooperation on a priority basis. 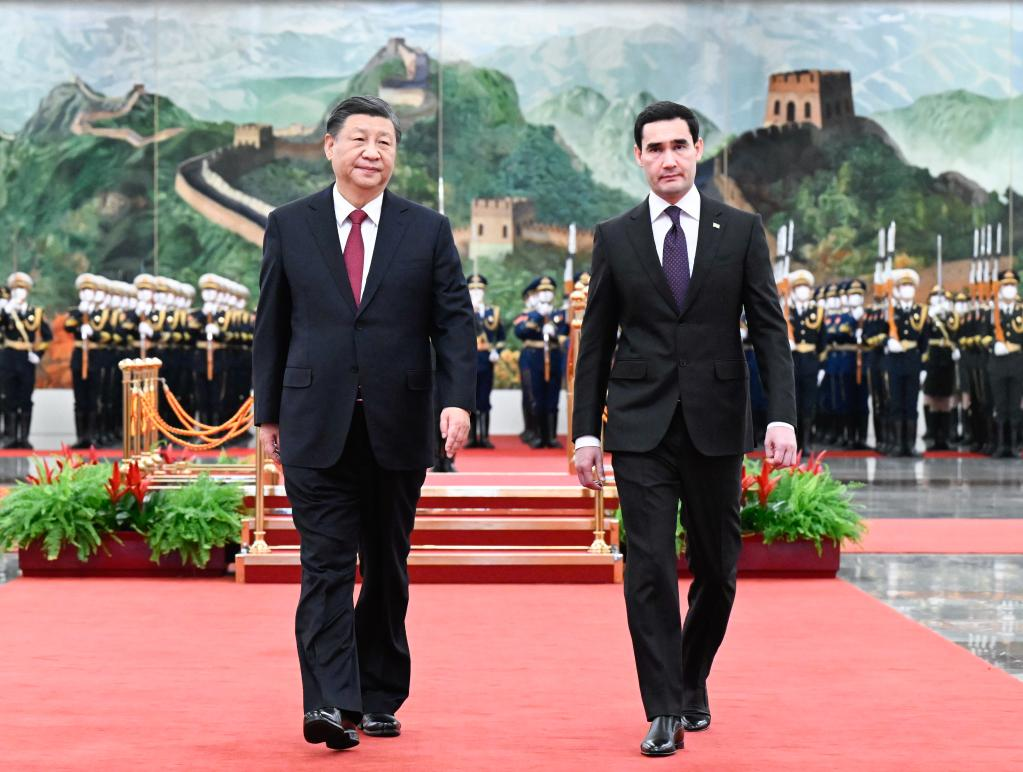 Chinese President Xi Jinping (L) holds a welcoming ceremony for visiting Turkmen President Serdar Berdimuhamedov, prior to their talks at the Great Hall of the People in Beijing, capital of China, January 6, 2023. /Xinhua

Chinese President Xi Jinping (L) holds a welcoming ceremony for visiting Turkmen President Serdar Berdimuhamedov, prior to their talks at the Great Hall of the People in Beijing, capital of China, January 6, 2023. /Xinhua

Friday marks the 31st anniversary of the establishment of diplomatic relations between China and Turkmenistan while the two presidents announced the decision to elevate the China-Turkmenistan relationship to a comprehensive strategic partnership in Beijing.

It holds great significance for the two leaders to draw up a comprehensive plan for the future development of China-Turkmenistan relations, Xi said.

The Chinese president urged the two sides to continue to expand the breadth and depth of cooperation, in order to create underpinnings for bilateral relations with tangible cooperation outcomes.

Since 2011, China has remained Turkmenistan's largest trading partner for 10 years in a row. Xi also told his Turkmen counterpart that China will support more capable Chinese companies in investing and doing businesses in Turkmenistan.

According to China Customs statistics, from January to August in 2022, bilateral trade between the two sides reached $6.9 billion, an increase of 52.4 percent year on year, of which Chinese imports were $6.36 billion, a year-on-year growth of 50.1 percent, and exports of $540 million, representing an 87.3-percent expansion year on year.

Aside from fostering energy cooperation, the two countries also close people-to-people exchanges. The Turkmen side now offers Chinese language courses in its primary and secondary schools, and there are more than 1,400 Turkmen students studying in China.

Xi stressed the two sides should accelerate the establishment of cultural centers in each other's country, complete the building of Luban Workshops as early as possible.

Expressing great pleasure at making his first state visit to China on this historic day, the Turkmen president said Turkmenistan applauds these great accomplishments in bilateral relations, and takes strong pride in its high-level mutual trust with China and the outcomes of bilateral cooperation. 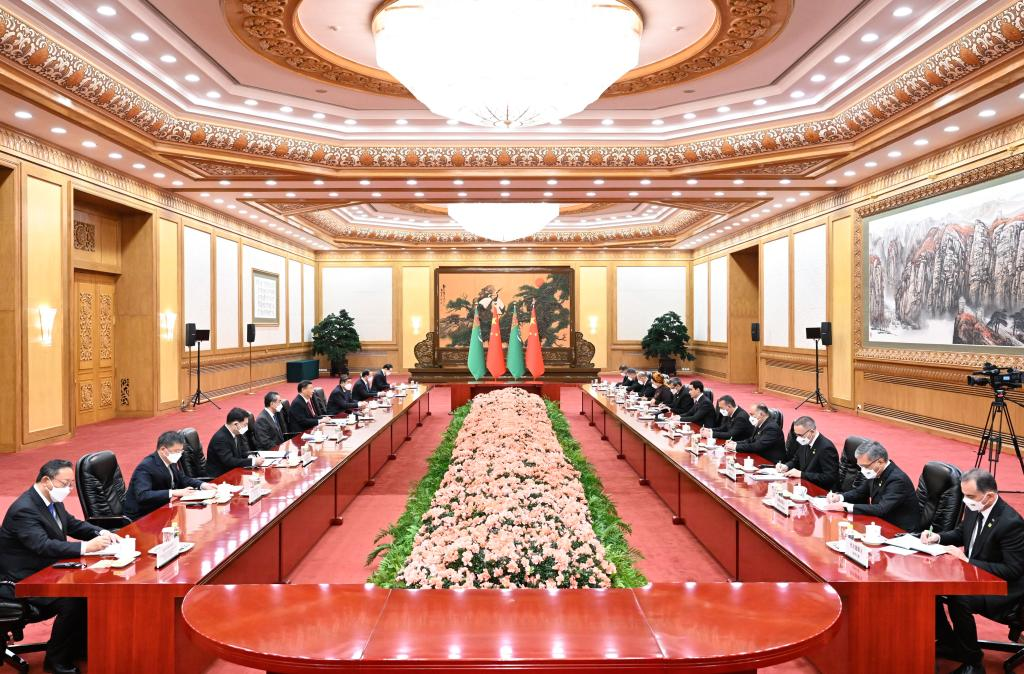 President Xi Jinping holds talks with President Serdar Berdimuhamedov at the Great Hall of the People in Beijing, January 6, 2023. /Xinhua

President Xi Jinping holds talks with President Serdar Berdimuhamedov at the Great Hall of the People in Beijing, January 6, 2023. /Xinhua

On August 31, 2022, a first China-Europe freight train departing from Turkmenistan, arrived at Xi'an international port in Shaanxi Province. The train loaded with raw materials of liquorice, a Chinese medicinal herb.

This is a brief case showing how foreign trade of countries along the Belt and Road route are boosted and how bilateral logistics channel are opened up through the win-win cooperation of the Belt and Road Initiative (BRI).

Witnessed by two heads of state, China and Turkmenistan on Friday signed a memorandum of understanding (MoU) on the synergy between the China-proposed BRI and Turkmenistan's development strategy to revive the Great Silk Road.

According to the MoU, the two sides have confirmed their shared intention to explore synergy between two economies and focus on policy coordination, facilities connectivity, unimpeded trade, financial integration and people-to-people bond to building a Turkmenistan-China community with a shared future.

During the meeting, Xi also noted that building a China-Turkmenistan community with a shared future is an endeavor that enables the two sides to further deepen mutually beneficial cooperation, better accommodate each other's concerns and reinforce their everlasting friendship on the basis of mutual respect, candor, mutual trust and mutual benefit.

Turkmenistan is also the second-largest state in Central Asia. The China and Central Asia (C+C5) cooperation model is also a key topic during the two leaders' meeting.

China will strengthen communication and collaboration with Turkmenistan to ensure the success of the first "C+C5" summit.

Turkmenistan highly commends and fully supports the "C+C5" cooperation mechanism, and will actively support China in hosting a successful "C+C5" summit, in a joint effort to safeguard security and development in the region, President Berdimuhamedov said.

(Cover: Chinese President Xi Jinping (R) holds a welcoming ceremony for visiting Turkmen President Serdar Berdimuhamedov, prior to their talks at the Great Hall of the People in Beijing, China, January 6, 2023. /Xinhua)