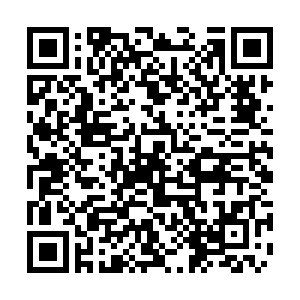 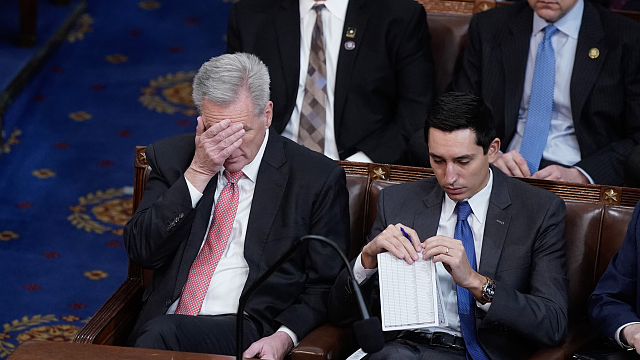 Representative Kevin McCarthy (L) during a meeting of the 118th Congress in the House chamber at the U.S. Capitol in Washington, U.S., January 5, 2023. /CFP

Representative Kevin McCarthy (L) during a meeting of the 118th Congress in the House chamber at the U.S. Capitol in Washington, U.S., January 5, 2023. /CFP

The newly elected House of Representatives is looking for a new speaker. It was supposed to be a done deal. However, the vote has become a historical spectacle and shows how torn the Republicans are.

The Republicans possess a slim majority in the House. It allows them to – under normal circumstances – easily elect a new speaker for the House of Representatives, the third most powerful office in the United States after President Joe Biden and Vice President Kamala Harris.

Ironically, Republican Kevin McCarthy was confident he'd get the vote. "I deserve this," he reportedly told his party colleagues before the first vote. In fact, he had already moved into the speaker's office.

But circumstances aren't normal. Few things in the GOP are these days. On the one hand, the party pledges to "drain the swamp" and give the power back to the people, both of which are typical political talking points. But rhetoric and reality are not on par. In fact, they can't even agree on their speaker and thus begin to constitute the House and start the work they all were elected for.

Thus far, six votes have been held. Six times McCarthy failed to obtain the required majority and, therefore, the support of his own party. The embarrassment of not electing McCarthy speaker highlights just how divided the GOP has become.

For moderate Republicans and those with a national agenda to bring the party forward, the McCarthy carnage over these past few days is more than an embarrassment. It is a political crisis where the GOP sabotages itself and utterly fails to adhere to the voter's will, who, during the midterms, were favoring a balance in Washington to keep Biden in check.

The latter appears inconceivable right now. The legislative branch of the government is currently paralyzed because of the Republicans. Bills can neither be discussed nor negotiated; laws cannot be made. 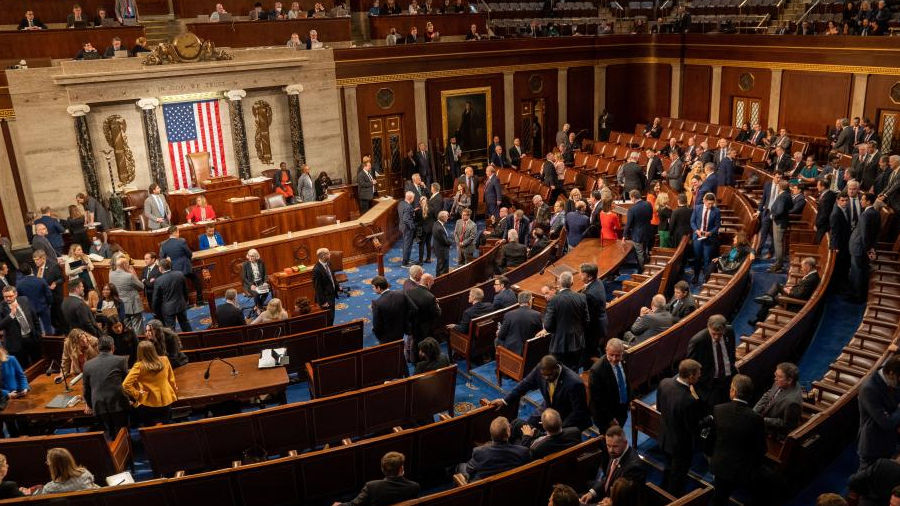 Members talk in the House chamber as the House meets to elect a speaker in Washington, U.S., January 4, 2023. /Xinhua

Members talk in the House chamber as the House meets to elect a speaker in Washington, U.S., January 4, 2023. /Xinhua

Every single failed vote will hurt the GOP moving forward. The party could even ill-afford 133 votes spread over two months, according to  the historic speaker election of 1856. Sooner or later, McCarthy will obtain the votes or step down for a different candidate.

But it is already a lose-lose situation.

If McCarthy stays and eventually obtains the required majority, he would be a badly battered speaker right from the start. The job of the speaker involves tending a "flea circus." Keeping your faction in line alternately with charm, posts, legislative favors, or harsh threats is essential. McCarthy seemingly lacks these skills from the start and is now paying the price.

The House Freedom Caucus has held McCarthy, the party and the entire House hostage with its demands. From Kevin McCarthy, for example, the group demanded that he guarantee them the post of deputy for each committee.

McCarthy even agreed to significantly lower the hurdles for the dismissal of a speaker – giving them a means of pressure to chase him out of office at will. More self-abandonment is hardly possible. But even that was insufficient. So was Donald Trump's call to vote for him. None of it was sufficient for his nay-sayers.

All of it raises the question of why the opposition against McCarthy is there in the first place. The Freedom Caucus argues that McCarthy stands for the "establishment," the swamp. However, the unprecedented degree of desperate appeasement that McCarthy championed to bring the defectors over to his side suggests that the Freedom Caucus is again not interested in policies or progress, but in carnage and headlines.

Moreover, the behaviour of the Freedom Caucus also shows how far parts of the Republicans have wandered to the extremes. So much so, that even a loyal Trump supporter like McCarthy is – so far – unwilling to bend to all their demands.

McCarthy's downfall is the party's downfall, and the inaptitude to unite behind a political agenda and a candidate for the country's benefit will undoubtedly be remembered by the voters in 2024.