On January 4, The New York Post published a news piece, claiming there are images that "appear" to show the Chinese burning the bodies of loved ones in the streets of Beijing. "A horrifying consequence of the country's current surge in COVID cases," the article stated. The image that the article used was debunked by The Paper. It was a memorial ceremony held for the dead. People were burning items in memory of their passing.

The usage of "appear" saved the piece and NY Post from having to admit that it was propagating a falsehood. But it doesn't save them from being guilty of using falsehood to support its biased reporting when it comes to China.

The NY Post isn't alone. Since China announced its changes to COVID-19 policies, many Western media outlets have painted a dire picture of the country. The main thread they are using, like the news piece tapped into, is that China's medical system is on the verge of collapse and that the Chinese are left to wither in the wind.

This article picks up three fallacies about China's COVID-19 response in recent days and it's time to provide you with a reality check. 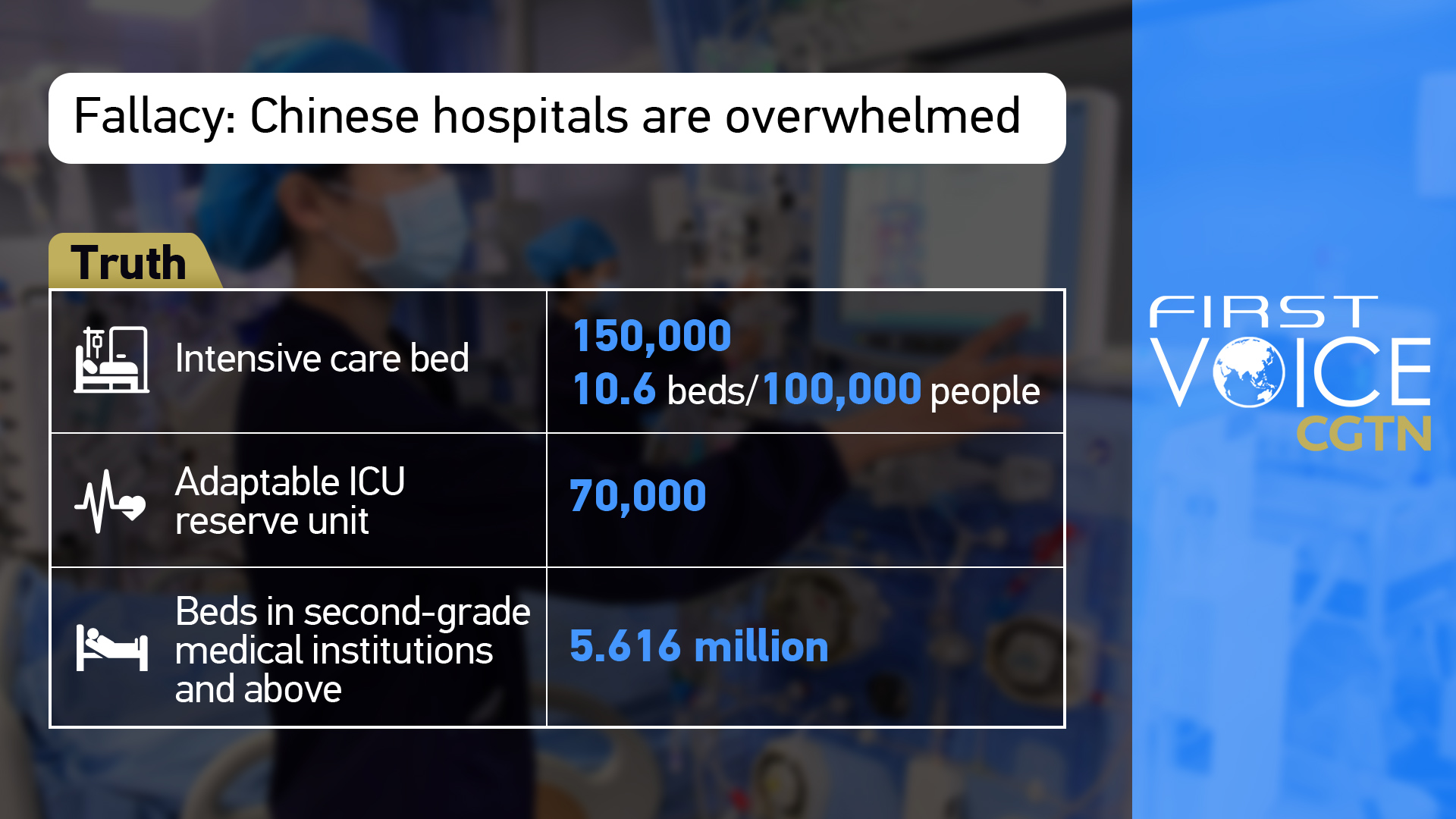 China has a population of more than 1.4 billion. It's inevitable to experience a higher number of people requesting medical attention once the policy changes went into effect. But China's preparedness, and its policy and measurement adjustments accordingly, have prevented the hospital systems from getting overrun, let alone a "collapse" as claimed by certain Western media.

China's National Health Commission stated on December 26 that the country has established a resource-allocating system to deal with the situation. Grassroots medical institutions are tasked with health monitoring, especially towards the vulnerable population. Secondary hospitals provide technological and personnel support to the grassroots institutions to satisfy regular medical demands. Tertiary hospitals would focus on treating severe and critical cases.

In China, there are more than 16,000 hospitals of medium size and above. The number of fever clinics in grassroots medical institutions totaled 41,000, as of December 25, 2022. According to China's Bureau of Medical Administration, the national occupancy rate of beds for severe cases had reached the 80 percent mark, as of December 30, 2022.

Within hospitals, medical personnel from different departments have been aiding the teams of respiratory departments to tend to surging demand. The Guangzhou health authorities have stated that some common outpatient departments at major hospitals can be rebuilt into fever departments and clinics if necessary.

Many cities and provinces with high-population density such as Beijing, Chongqing, Jiangsu Province, Zhejiang Province and Sichuan Province have reported that they've passed the peak of infections and are seeing fewer patients visiting hospitals. China's hospital system, despite the enormous stress, fulfilled its duty and stayed intact.

In December, 2022, China's Ministry of Industry and Information Technology said that the supply of medicines for key locations were prioritized. Large pharmacies have been mobilized to develop online platforms to facilitate medicine delivery to patients.

Zhou Kai, the general manager of the Northeast Pharmaceutical Group, said that "We've dispatched specialists to work with raw material suppliers in order to ensure the smooth supply of crucial materials. And thanks to help from the central government in coordinating with the suppliers, our paracetamol output can now match demand for the coming three months nationwide." The paracetamol produced by the Northeast Pharmaceutical Group sells for only 0.1 yuan per tablet.

Shandong Xinhua Pharmaceutical Co. Ltd. is the world's leading producer of ibuprofen materials. Its tablet capacity has raised threefold, and its ibuprofen production has surpassed 10,000 tablets a minute.

"We quickly adjusted the variety of drugs we produce, increased the output, and went all out to ensure the market demand of antipyretic and analgesic drugs such as ibuprofen and aspirin," Kou Zuxing, deputy general manager of the company, said.

There are about 1.1 billion netizens in China. To deal with the rising demand for medical attention, China's National Health Commission issued a notice on December 12 to expand online medical services for COVID-19 patients.

The Sir Run Run Shaw Hospital in Hangzhou, Zhejiang Province, launched a green channel for rapid COVID-19 consultation on December 9. A total of 72 experts staffed the 24-hour online services. And in Shandong Province, the Yantai Yuhuangding Hospital opened its online fever clinics for the first time on December 16. Nearly 130 online consultations were recorded on December 17. And by Dec 22, the number reached 757.

Zhang Zhenzhen, who works at the hospital's network information office, said that the internet hospitals are cooperating with offline designated pharmacies. "After consultations, prescriptions and order placements are completed through the mini-program, patients can come to the hospital or a designated pharmacy to collect their medicines, or they can choose to have their medicines delivered to their homes," said Zhang.

Yin Shaohua, the director of the hospital's outpatient department, said that the online clinics can help reduce cross-infection and meet patients' needs for diversified medical care.

On January 7, the National Healthcare Security Administration and three other departments issued a joint document to optimize medical insurance policies to ease the financial burden of COVID-19 patients. It stipulated that all COVID-19 patients will receive subsidies from state finance for hospitalization expenses not covered by basic medical insurance, serious disease insurance or the medical assistance fund if they are admitted before April 1, 2023.

Patients covered by medical insurance can have no less than 70 percent of their fees generated from outpatient and emergency COVID-19 infection treatment at designated medical institutions reimbursed as of March 31.

There's little doubt that the COVID-19 situation in China presents a serious challenge to the country. But China has been instituting systems and measures to deal with the situation since announcing the policy change. "Putting people's interests first" has been China's motto and guiding principle in its fight against COVID-19 for the past three years. It remains so on the road ahead.

And for those who seek to paint a portrait of China in disarray, nothing can be further from the truth.