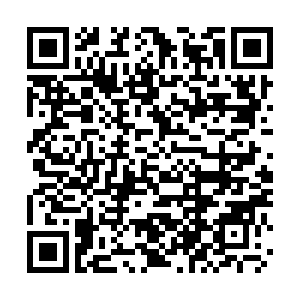 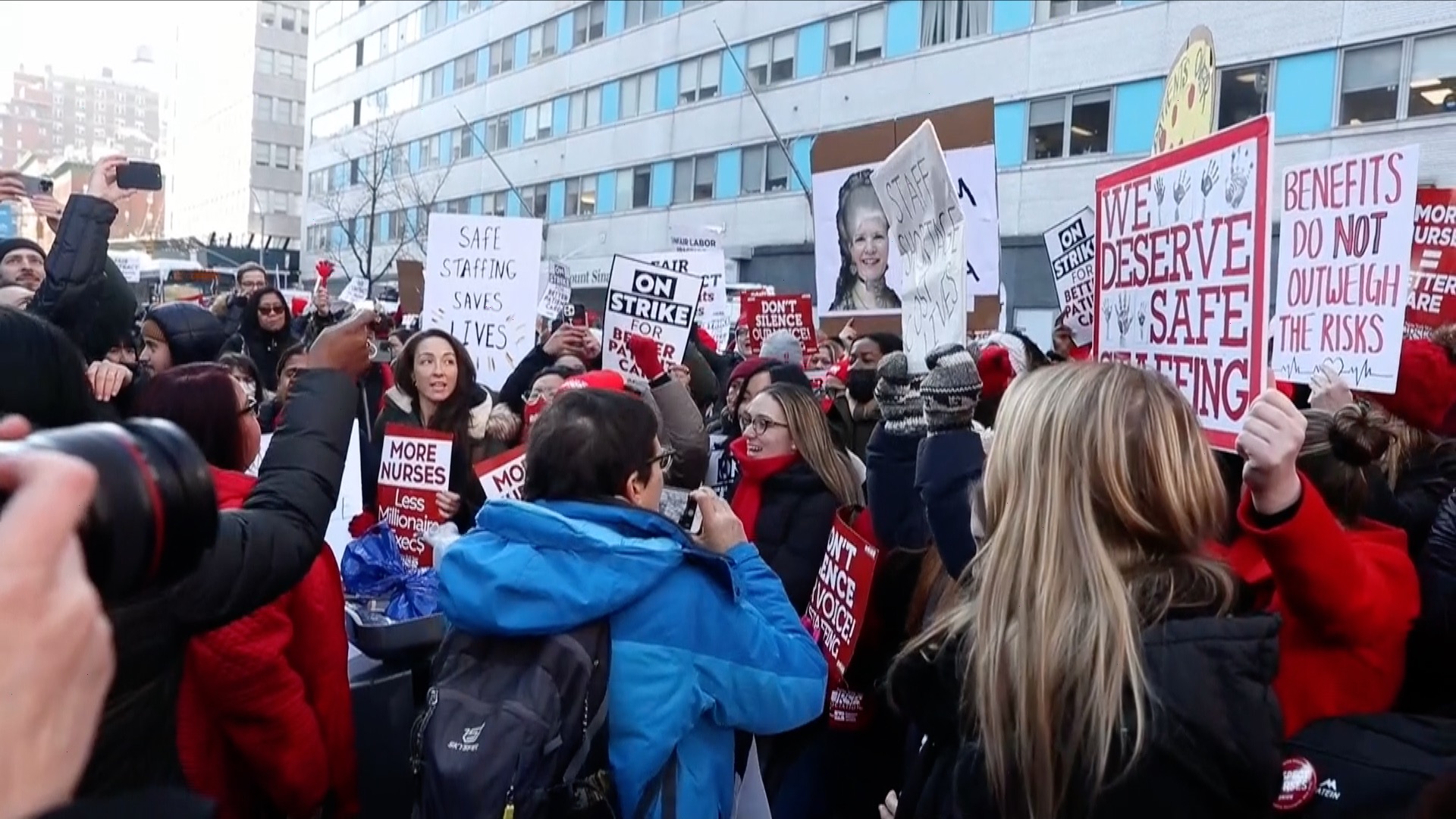 Hundreds of nurses and their supporters lined both sides of the Madison Avenue in front of Mount Sinai Hospital on Monday, waving signs, blowing horns and calling for a labor contract that will require more nurses at the bedside of patients.

The nurses, members of the New York State Nurses Association, went on strike after talks with Mount Sinai Hospital management broke down in the early morning hours. Strikes also unfolded at the three campuses of the Montefiore Medical Center in the Bronx over similar issues of pay and staffing.

"Monday's labor action, involving more than 7,000 nurses, represented the largest nursing strike in decades in New York City," said The New York Times (NYT), noting that nurses are increasingly turning toward walkouts as a labor strategy, both nationally and abroad.

"Nurses, who both saw how valued they were during the darkest days of the COVID-19 pandemic, and who struggled with exhaustion and burnout, said they were standing their ground to improve conditions both for themselves and their patients," it added.

In an opinion article published a year earlier by NYT, "We Know the Real Cause of the Crisis in Our Hospitals. It's Greed," the author said that as the third year of COVID-19 started, America's nurses, who people celebrated as heroes during the early days of lockdowns, were now leaving the bedside.

"Nurses set the record straight about the root cause of the nursing crisis: chronic understaffing by profit-driven hospitals that predates the pandemic," it said, quoting one nurse as saying that "I could no longer work in critical care under the conditions I was being forced to work under with poor staffing."

"Fueled by factors like employee burnout, an aging population and a dearth of training, states across the country are facing a familiar and common problem: a nursing shortage," U.S. News and World Report once noted, saying that even before the COVID-19 pandemic began to unfold at the start of 2020, a gap existed between the supply and the demand through 2030.

Once the COVID-19 crisis hit, healthcare positions were not isolated from sudden job losses, which helped widen the gap between projected demand and the actual number of registered nurses in the United States, it added.

A study by the U.S. Department of Health and Human Services (HHS) projected that the demand for registered nurses would hit more than 3.6 million by 2030. On top of the existing workforce, the field would have needed to add nearly 50,000 new registered nurses each year since 2014 to meet that demand.

"The shortage may worsen in part due to who exactly is leaving the profession," said U.S. News and World Report. Since 2016, registered nurses, 25 to 34 years old, have accounted for the highest share of the profession by age group. But between May 2020 and May 2021, the number of nurses in that age group declined 5.2 percent.

Meanwhile, those aged 35 to 44 years, who make up the second-highest share of nurses, saw their numbers decline at an even higher rate of 7.4 percent. The number of registered nurses aged 65 and older hit its highest level yet in data from the Bureau of Labor Statistics that dated back to 2011. 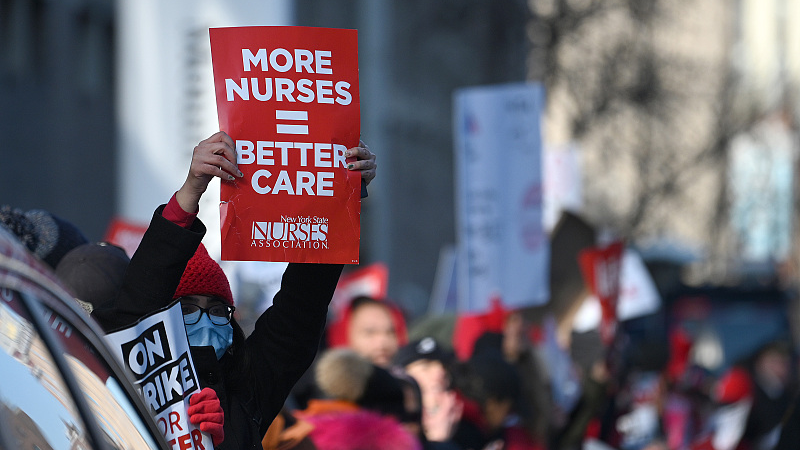 Nurses stage a strike in front of Mt. Sinai Hospital in the Manhattan after negotiations broke down, New York, U.S., January 9, 2023. /CFP

Nurses stage a strike in front of Mt. Sinai Hospital in the Manhattan after negotiations broke down, New York, U.S., January 9, 2023. /CFP

Pandemic job losses in healthcare as a whole impacted women much more than men. In January 2020, women held over 13 million jobs in the U.S. healthcare industry, compared with the 3 million held by men. By April of that year, women had lost 10.6 percent, or 1.38 million, of those positions, as men lost 5.5 percent of theirs.

Amid the pandemic, "health leaders say nurses are bone-tired and frustrated from being asked to work overtime, from getting screamed at and second-guessed by members of the community, and from dealing with people who chose not to get vaccinated or wear a mask," NBC has reported.

As Omicron cases surged, U.S. nurses had been stretched to their limits for months under extreme physical and emotional burdens and facing immense burnout.

"Many nurses are left to silently suffer as they face overwhelming feelings of exhaustion, irritability, anxiety and sadness that are chipping away daily at our mental health," said Lauren Ghazal, a board-certified family nurse practitioner in New York and a postdoctoral research fellow at the University of Michigan.

As the American workforce was then undergoing a rapid transformation as part of the "Great Resignation," more nurses turned toward options like travel nursing, short-term employment contracts in hospitals and regions that were in dire need of them and offered more money than the salary of local staff nurses, the report said.

To keep patients safe and protect healthcare workers, lawmakers came up with an idea of nurse-patient ratios regulation, which California put in place in 2004, with positive results. Similar legislation was proposed and defeated in Massachusetts several years ago, with help from a $25 million "no" campaign funded by the hospital lobby.

However, such a plan is currently on the table in Illinois and Pennsylvania. These laws could save patients' lives and create a more just work environment for a vulnerable generation of nurses, the ones the country pledged to honor and protect at the start of the pandemic.

U.S. National Nurses United has been an active advocate of the nurse-patient ratios regulation, saying that "safe staffing ratios, coupled with nurses' powerful voice of advocacy secured in collective bargaining, protect our patients from complications that arise from missed care such as medical errors, healthcare disparities, infections, and so much more."

"Decades of studies have shown that more nurses equate to lives saved and fewer complications. Researchers have been focusing on what exactly is the mediating link between increasing registered nurse staffing and improved outcomes," it added.