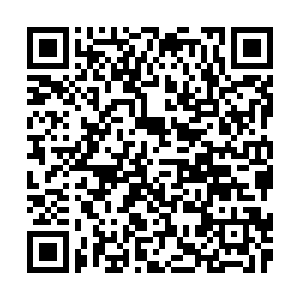 From ancient times, the flower was used as a symbol of femininity in traditional Chinese paintings. In the painting "Court Ladies Adorning Their Hair with Flowers" attributed to Zhou Fang from the Tang Dynasty (618-907), flowers provide a perfect foil for the beauty and elegance of the noble ladies. The horizontal scroll portrays five court ladies and a maidservant amusing themselves in a garden scene. With smooth lines and the use of bright and vigorous colors, the painter captured the gracefulness, plumpness and elegance of Tang Dynasty women. The flowered headdress became synonymous with court ladies, which later appeared in many ancient Chinese paintings that involved noble female figures, embodying their luxurious and leisurely lifestyles. Produced by China Media Group, the cultural program "China in Poetry and Painting" invited dancers from the Shenyang Dance and Opera Troupe to adapt this masterpiece into a dance performance, giving audiences a good taste of the distant yet profound magnificence of the Tang Dynasty. 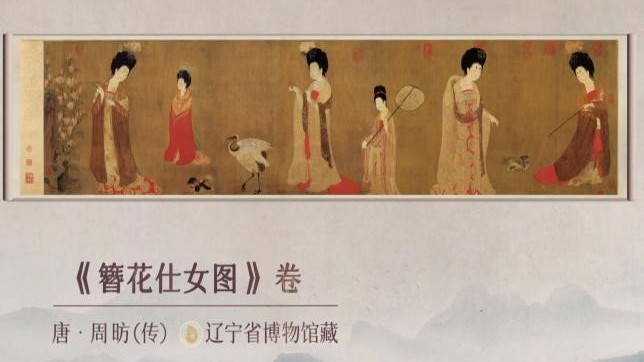 Throughout the history of Chinese art, painters never tired of making beautiful female figures the subject of their works. Amid a flourishing economy and big societal interest in art and culture, the genre of "paintings of court ladies" enjoyed high popularity and reached significant achievement during the Tang Dynasty. As one of the classics, "Court Ladies Adorning Their Hair with Flowers" is housed in the Liaoning Provincial Museum. Even though it is not signed, it's traditionally attributed to Zhou Fang from the Tang Dynasty. In the painting, the five women wearing flowered headdresses are all high-level nobles of that time. Just as the season changes from spring to summer, the ladies are admiring the flowers in the imperial courtyard. They are plump, wearing delicate, long dresses that trail along the floor, covered with a thin layer of high-quality gauze. The women wear different flowers on their aristocratic chignons, such as peonies and lotuses, which are linked to prosperity and richness in traditional Chinese culture. By illustrating the lifestyle of these five noble women and their maidservant, the painting provides a view of feminine beauty and the social customs of the Tang Dynasty. 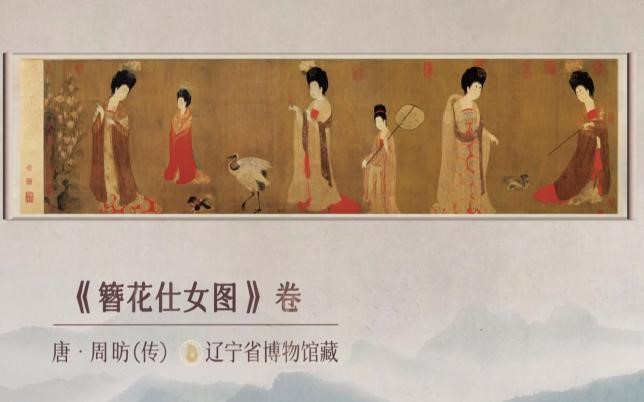 "Court Ladies Adorning Their Hair with Flowers" is believed to be one of the only surviving works of the "paintings of court ladies" genre from the Tang Dynasty. Fan Di'an, dean of the Central Academy of Fine Arts, praises the masterpiece for two reasons. First, as one of the most celebrated scrolls with fine brushwork, it represents one of the peaks in the history of ancient figure paintings. Second, it is a faithful representation of life in Tang Dynasty, reflecting the improving social status and the increasing self-reliance of women at that time. 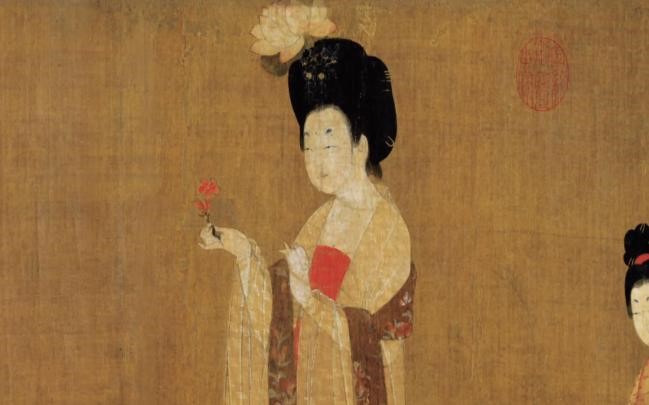 On the "China in Poetry and Painting" stage, accompanied by a melodious soundtrack, dancers of the Shenyang Dance and Opera Troupe portrayed this masterpiece as a graceful dance. All of the lead dancers are dressed as the ladies depicted in the painting. Through their gentle movements and fluttering sleeves, the figures portrayed by the thousand-year-old scroll are brought to life for the audiences. The choreography is well-designed, faithfully representing the scene of ladies admiring flowers in the garden. Each of the lead dancers has unique postures, suggesting at the possible distinct personalities of the painted ladies, and bringing an atmosphere of glamour and beauty of the Tang Dynasty to the audience. 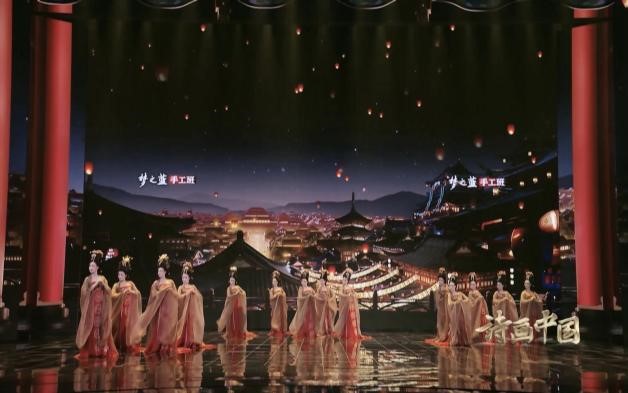 Through the ages, ancient Chinese art has been stimulating the nation. Traditional female-figure paintings, such as "Court Ladies Adorning Their Hair with Flowers," have depicted the changes of social life and the rising power of women, and are of great significance in enabling subsequent generations to further explore and develop Chinese culture. While inheriting the fine traditions of the existing cultural treasure trove, Chinese talents are striving to create new glories.