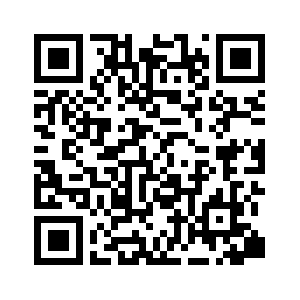 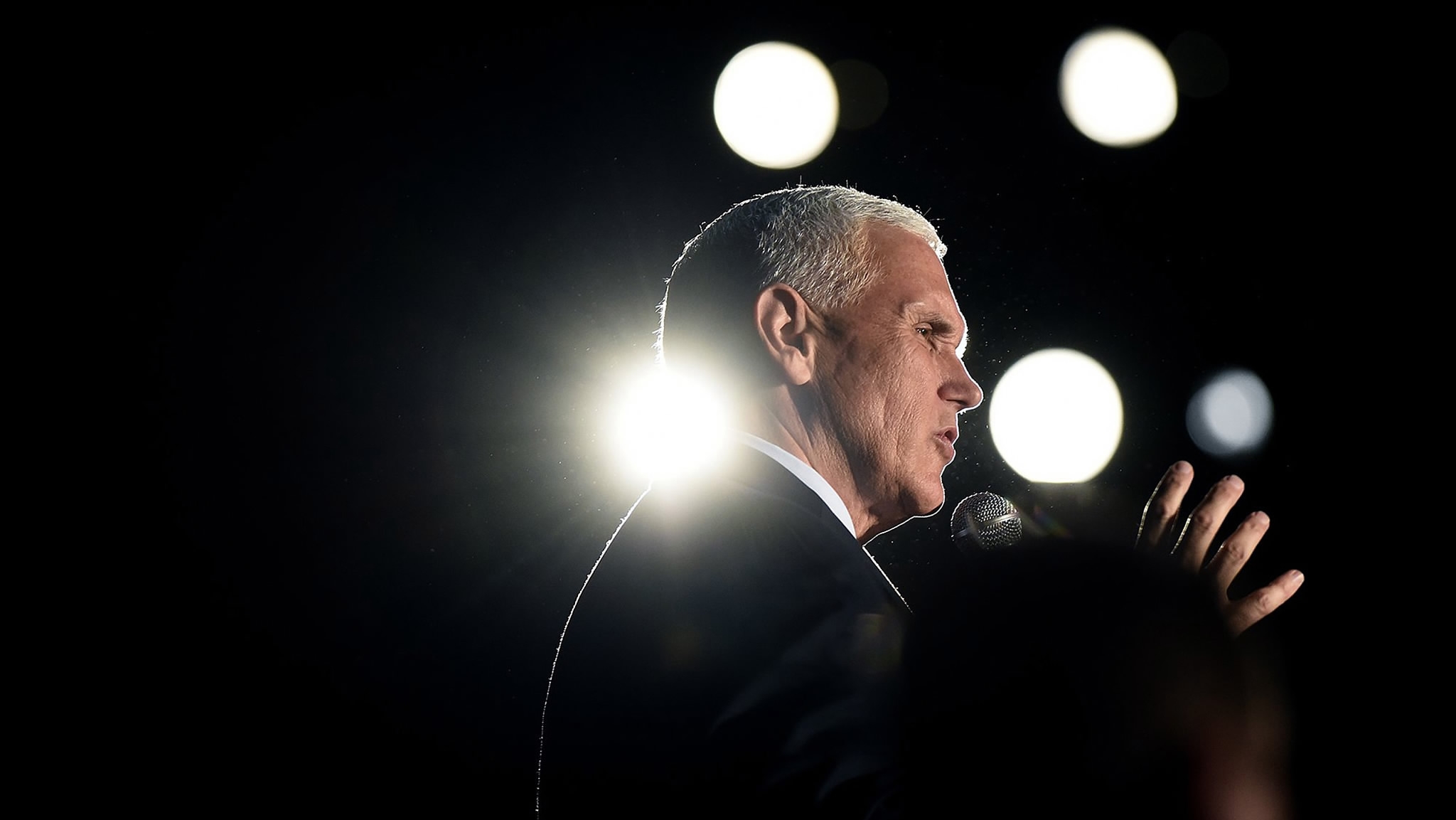 Mike Pence isn’t seeking the spotlight — not yet at least.
After one year in the White House, the US vice president has maintained a low, quietly supportive profile in the shadow of his boss. Even part-way through a controversial, delayed tour of the Middle East, Pence’s visit has been obscured by a government shutdown and the one-year anniversary of Donald Trump’s presidency.
In the background, however, the 58-year-old has effectively pushed his conservative agenda while building a network of Republican donors and supporters.

Pence was struggling to hold on to the governor’s mansion in Indiana when Trump picked him as his running mate, after the then Republican nominee was dissuaded from picking Chris Christie. He also replaced Christie – and Christie’s opposition to the controversial Michael Flynn – as head of the transition team.
The former Indiana governor ticked several boxes for Trump as a running mate, even if the reality star and the evangelical Christian are hardly a natural fit. 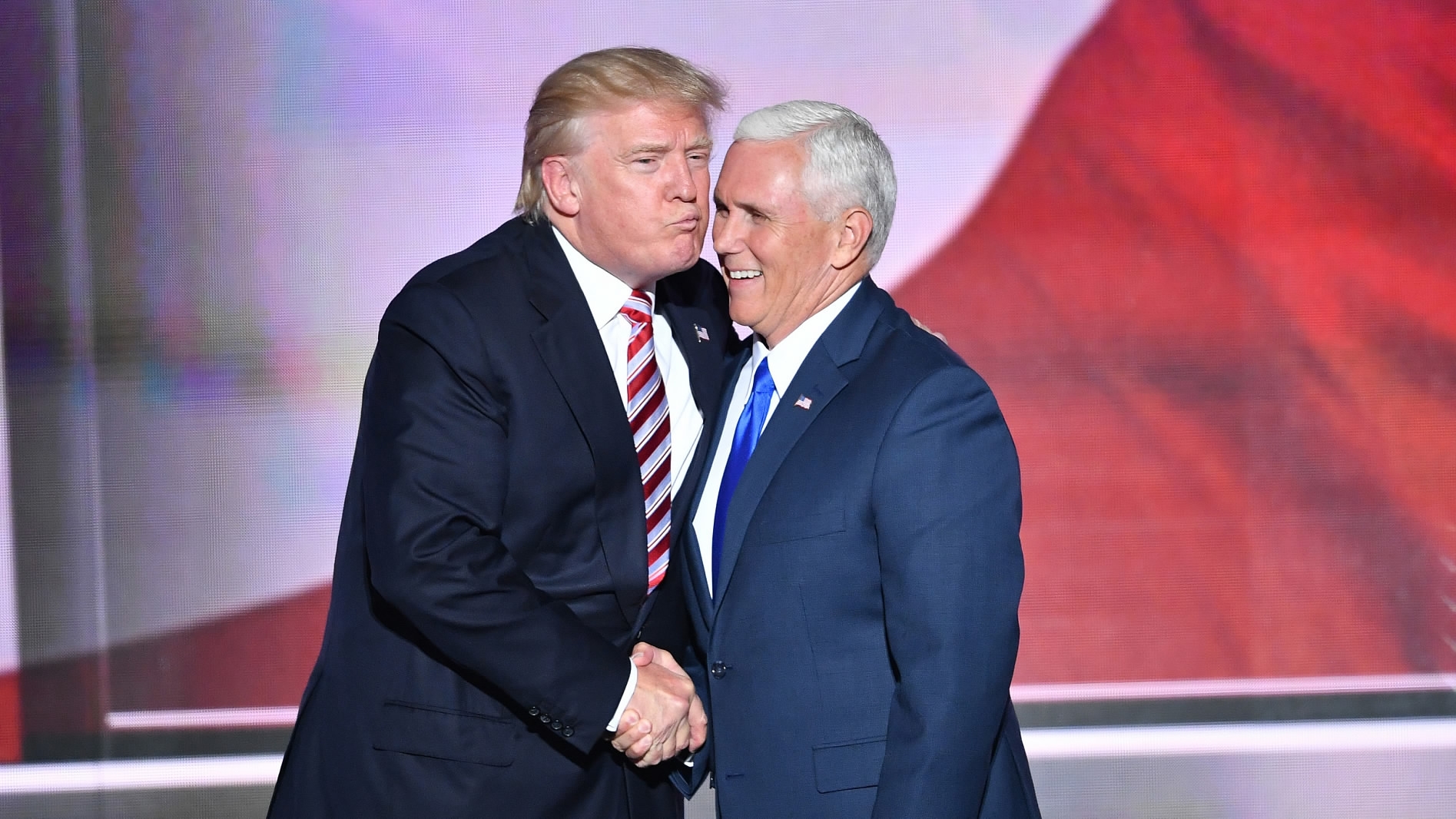 The vice president is famed for his pledge to never eat alone with a woman who isn’t his wife, and frequently repeats the mantra, “I am a Christian, a conservative, and a Republican, in that order.”
But as a social conservative with experience in Congress and close links to the moneymen behind the Republican base, including the Koch-funded Americans for Prosperity group, Pence was a good balance to the ticket.

Pence ran for Congress in Indiana in 1987 as a 29-year-old, losing out both in that election and again in 1990 before taking a job as a conservative talk radio host. The radio role helped him gain name recognition and connections, and in 2000 he was elected as a congressman.
After 12 years in which he took on a leadership position among conservatives in Congress and aligned with the Tea Party movement, he ran for governor of Indiana and won.
Pence is known for his right-wing views, notably opposing abortion in any circumstance other than a woman’s life being in jeopardy and questioning the relevance of climate change. 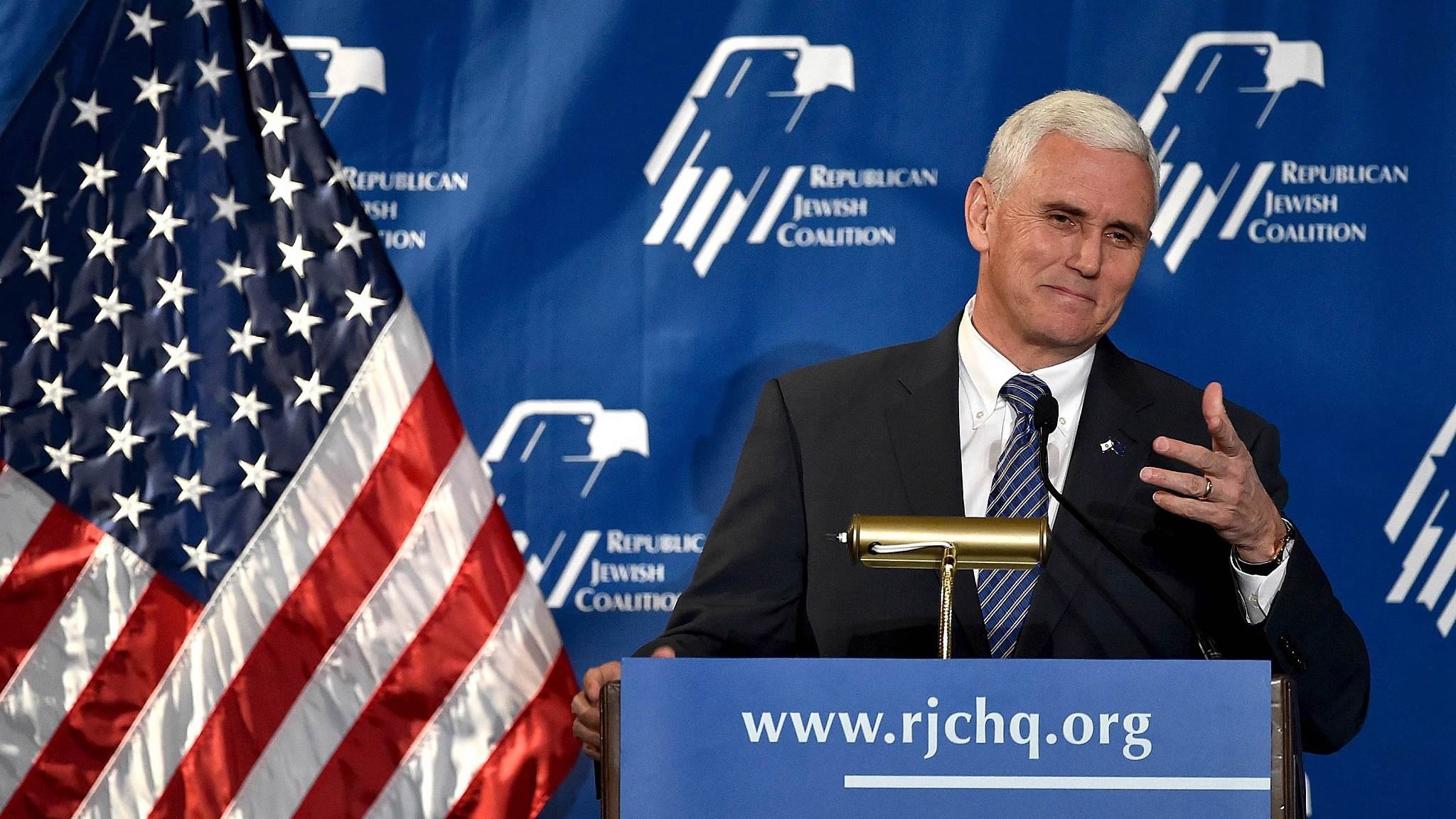 As governor he implemented an income tax cut which Trump described as a model for the Republican tax plan, and also tightened abortion restrictions.
The Religious Freedom Restoration Act (RFRA), which Pence signed into law, led to demonstrations over claims it allowed discrimination against gay people.
The law led to uproar in Indiana's business community, and Pence ultimately signed a watered down version, in turn irritating his conservative base. His poll numbers dropped and he was set for a tight reelection race -- before Trump came calling.

Pence's present purpose and power appears to be low-key influence. In the White House he has been unerringly supportive of and loyal to the president. On the campaign trail, he is reported to have seriously wavered only after the notorious Access Hollywood tape was aired.
In the first year of the Trump administration, issues championed by Pence have been pursued by the White House but the vice president has not taken on any portfolio. Behind the scenes, he has pushed the social conservative agenda -- most prominently on abortion rights and aid -- according to a recent Reuters report. 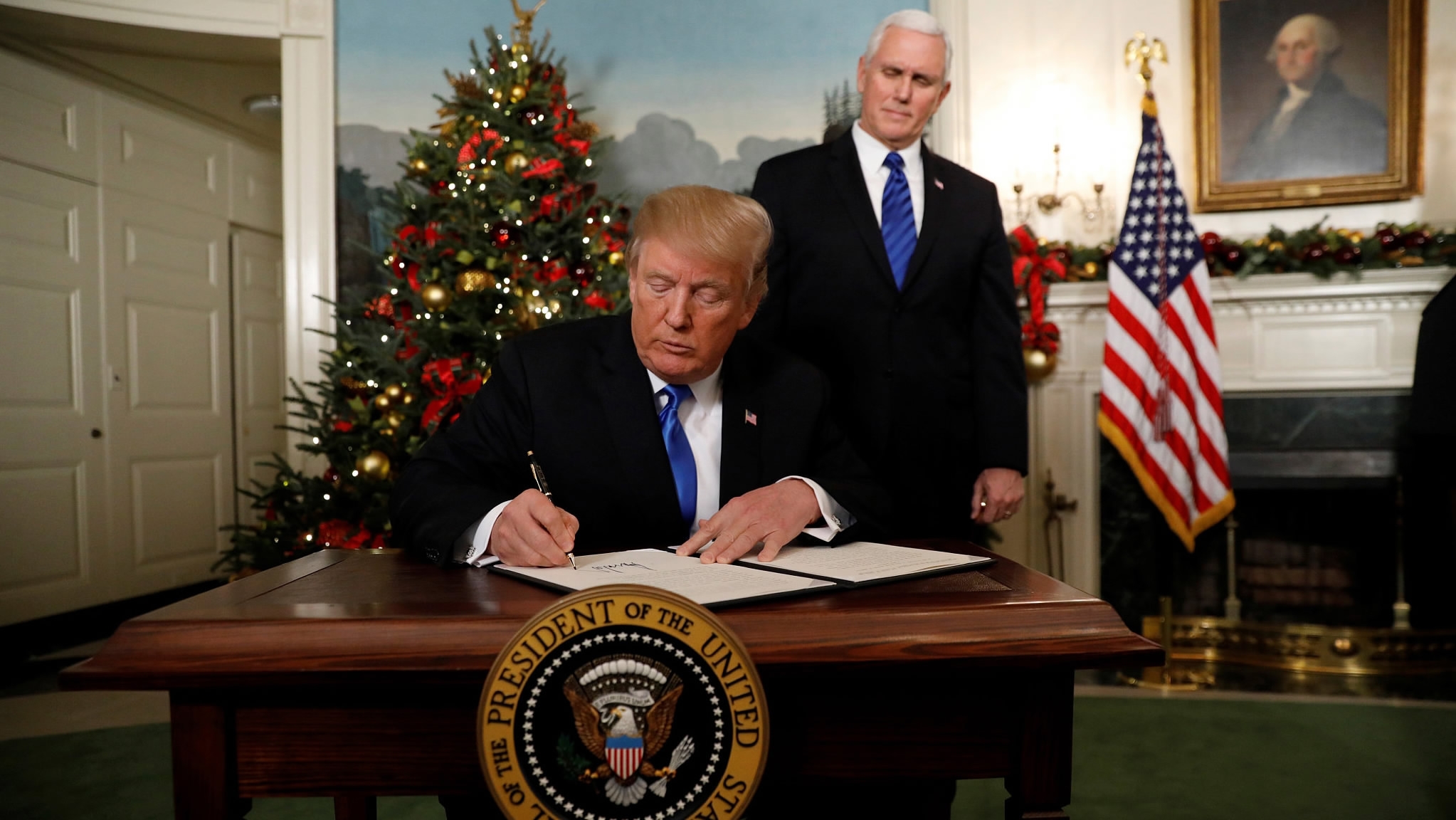 Vice President Mike Pence looks on as US President Donald Trump signs an executive order after he announced the US would recognize Jerusalem as the capital of Israel on December 6, 2017. /VCG Photo‍

Vice President Mike Pence looks on as US President Donald Trump signs an executive order after he announced the US would recognize Jerusalem as the capital of Israel on December 6, 2017. /VCG Photo‍

On Sunday he was greeted as a “great friend” of Israel on landing in Tel Aviv, after being rebuked by the leaders of Egypt and Jordan over the Trump administration’s approach to Middle East peace – a policy he is credited with strongly pushing and is popular with his base.
Pence also played a central role in attempting to navigate healthcare and tax reform plans through Congress last year.

Pence spoke from an early age of his ambition to be president, according to an October 2017 profile in the New Yorker. After staying out of the 2016 race and the controversy over the RFRA, the vice presidency gave him a lifeline in his quest for the White House.
With various question marks over the chances of Trump seeing out a full term in office — the Russia inquiries as well as doubts amplified in the recent Michael Wolff expose — Pence is within touching distant of the Oval Office. 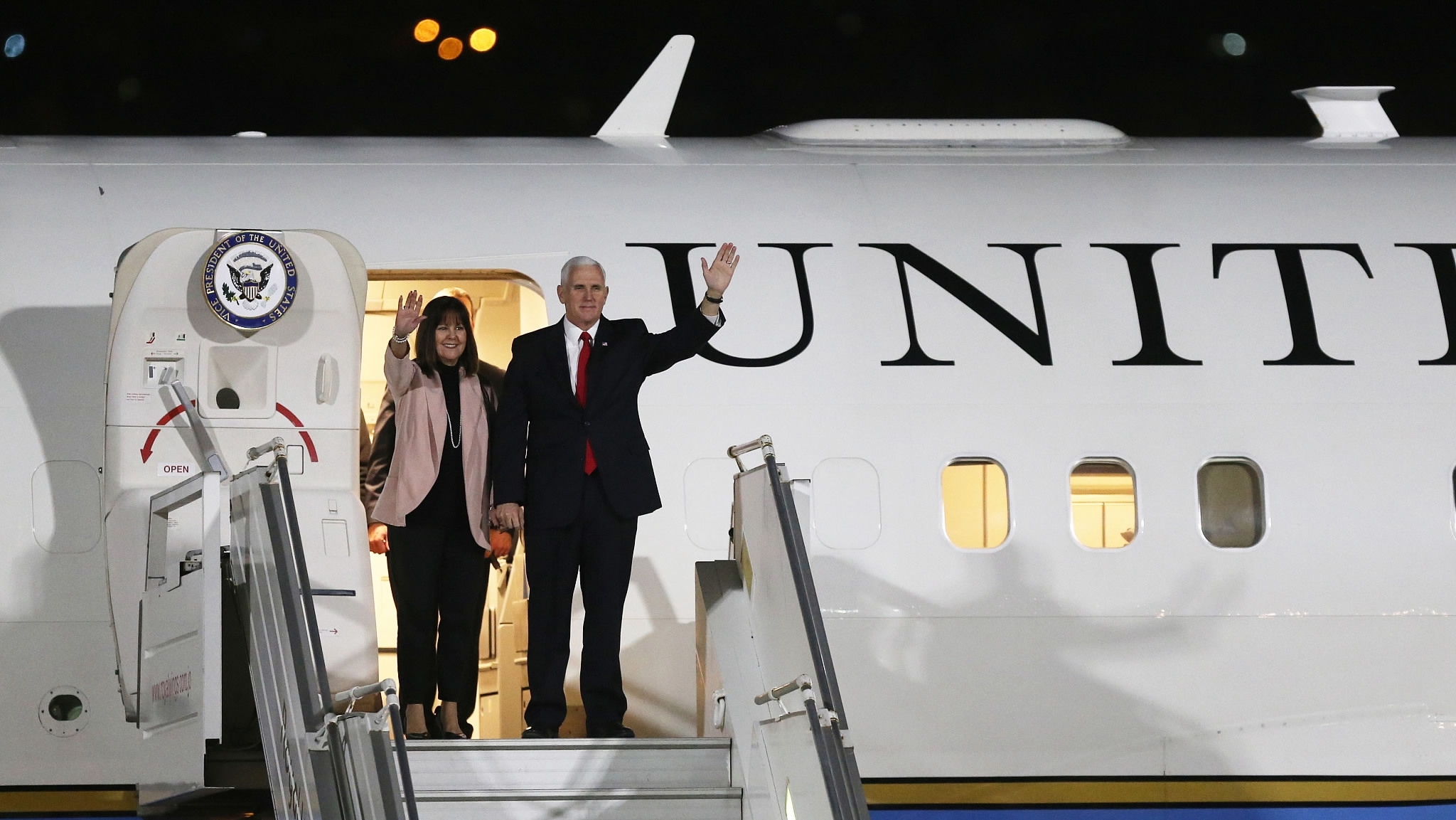 US Vice President Mike Pence and his wife Karen Pence wave as they arrive at Marka airport onJanuary 20, 2018, in Amman, Jordan. /VCG photo

US Vice President Mike Pence and his wife Karen Pence wave as they arrive at Marka airport onJanuary 20, 2018, in Amman, Jordan. /VCG photo

The vice president has already set up his own Political Action Committee, the Great America Committee, through which he is backing aligned Republican candidates in the 2018 midterms elections.
Whereas Trump has held mass rallies over the past year, Pence has attended lower key events across the US and is expected to be welcomed on the midterm campaign trail by candidates who fear taking a stage alongside the president may not be beneficial.
If Trump does not run in 2020, Pence has established a powerful network of supporters and a platform to contend the presidency – so long as he can claim some successes over the next three years.
A New York Times article claiming that Pence’s supporters had already told Republican donors that he would run if Trump did not was fiercely denied as “disgraceful and offensive” last year. 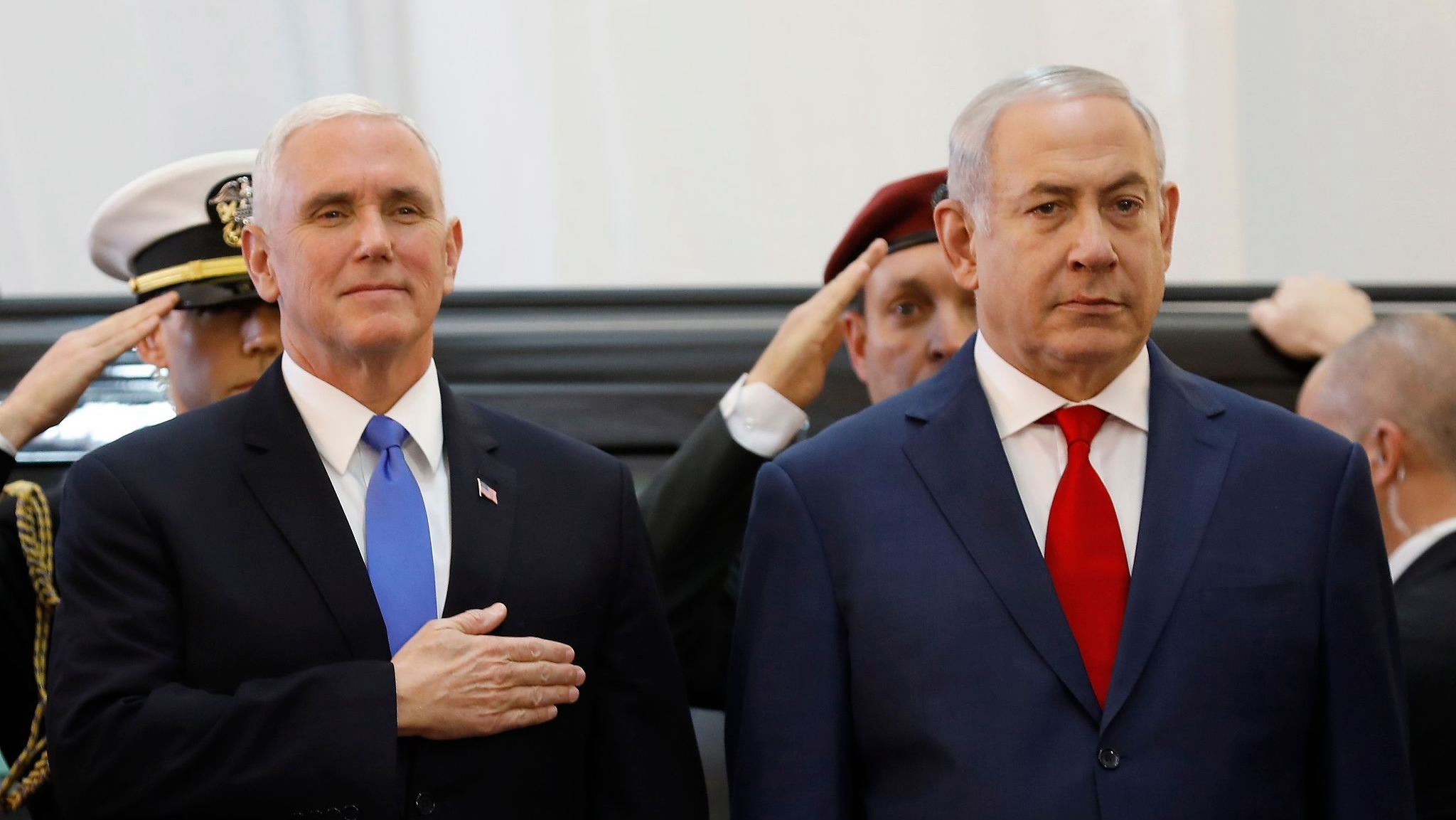 But in the Trump era, supportive and low key is perhaps the best strategy for ambitious people working in the White House — as Steve Bannon found out.
Pence is playing a longer game. Few doubt his ambition to take the top job, many see his actions in the White House — he has been described as “sycophant in chief” by Bannon, but has also been quietly associated with many of Trump’s high profile decisions — as laying foundations for the highest office in the US, whether in 2020 or 2024.