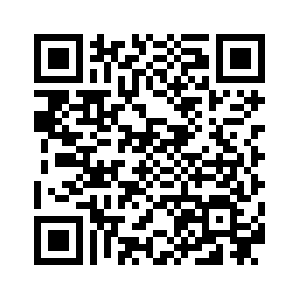 The New Year's Eve celebration in New York's landmark Times Square officially kicked off with a performance of traditional Chinese dragon dance.
A colorful 15-meter-long Tongliang Dragon, named after Tongliang District of southwest China's Chongqing, jumped, rolled and hovered under control of eight performers. Accompanied by traditional folk songs originated from Chongqing, the dragon rods were like paddles quickly swiping with the increasingly strong rhythm.
"The dance was amazing, and it really makes me curious about this part of China," said Tim Tompkins, President of the Times Square Alliance. 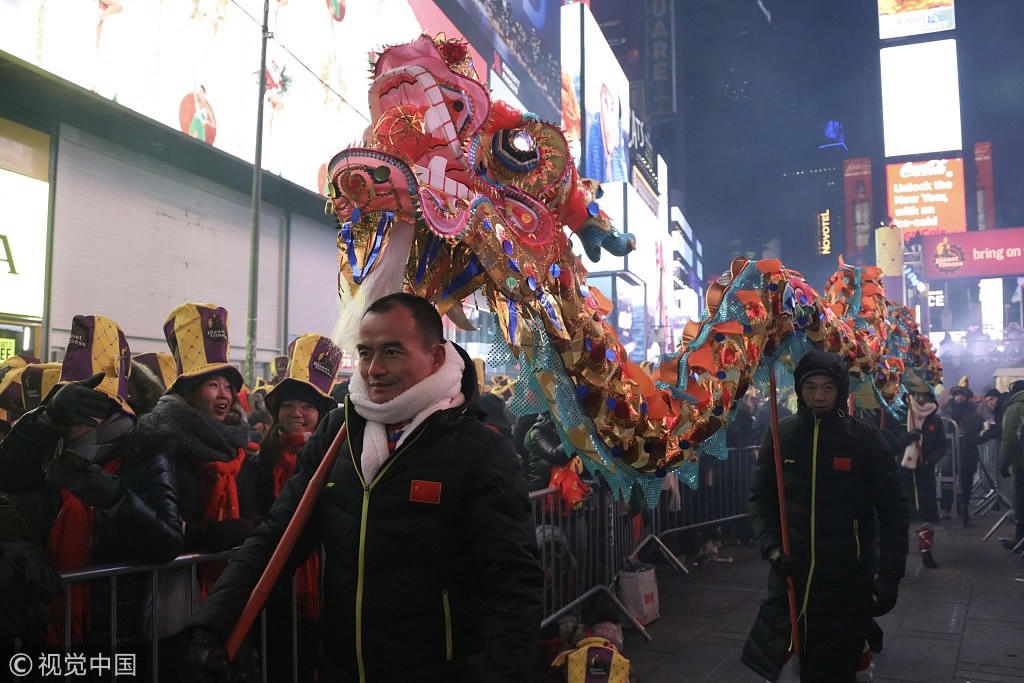 He added that people were lucky to be able to watch performances from different parts of China in the past years and learn about "the richness and the history of Chinese culture which is so much longer than what we have in the United States."
The performance was applauded by revelers on the streets, who were wearing red scarves printed with "Happy New Year 2018" and "Chongqing China," giving this year's celebration a special touch of Chinese red.
Following the dragon dance, various performances went on with performers including Mariah Carey, Nick Jonas, Camila Cabello and Sugarland taking turns to show up on the stage. 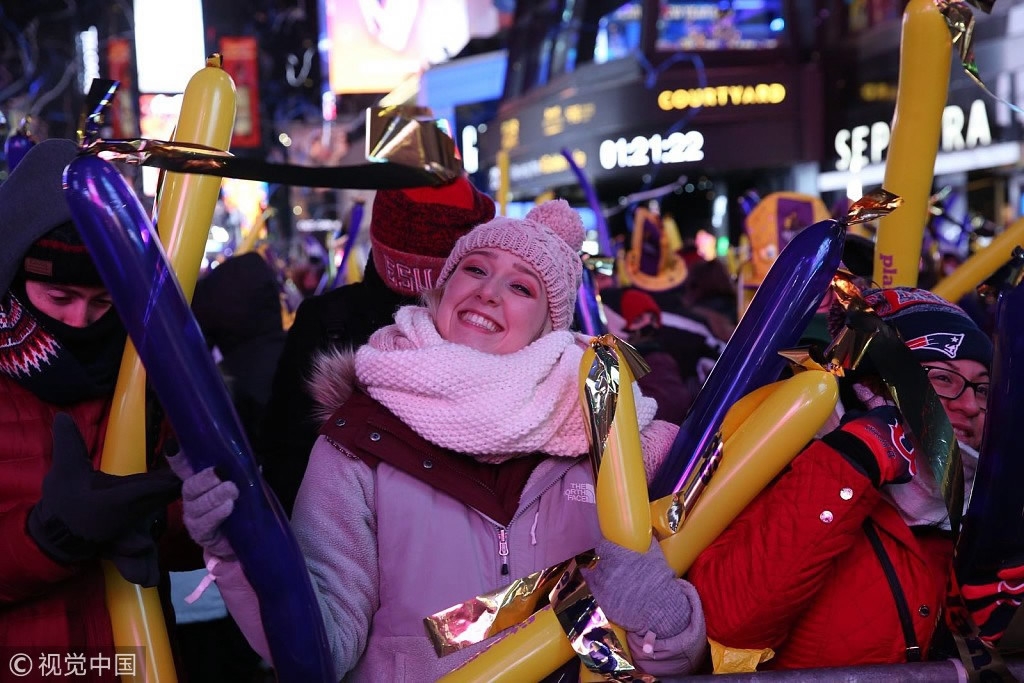 The annual New Year's Eve celebration at the Times Square is known for its ball drop. The ball descends in 60 seconds down a specially designed flagpole, beginning at 23:59 pm and resting at midnight to signal the start of the next year.
Some of the revelers came to Times Square as early as 11:00 am Sunday to secure a good position to watch the ball drop. Raul Revelo was one of them. He has come to New York City from Washington D.C. every year since 2010.
"I love everyone's energy. Everyone is so happy and positive. With the music and the lights everything just gets so exciting," said Revelo. 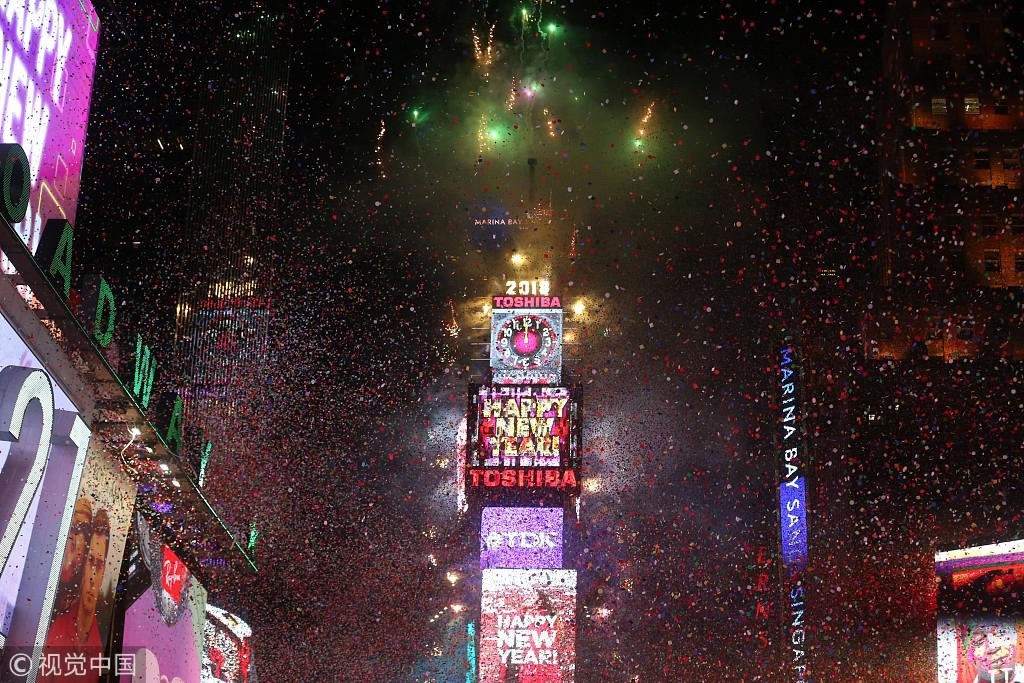 A watchtower is seen counting down to the new year ahead during the new year's celebrations at Times Square. /VCG Photo

A watchtower is seen counting down to the new year ahead during the new year's celebrations at Times Square. /VCG Photo

Some two million people braved New York's coldest New Year weather for a century to welcome 2018 in Times Square. The temperature was estimated at negative 12 degrees Celsius at midnight.
The temperature could drop below negative 12 degrees Celsius after midnight.
In addition to advising people who join the celebration to dress warm, the city police also enhanced security measures.
Police have said they are adding additional security to the outer perimeter of Times Square to ensure those waiting to enter screening areas will be protected from moving vehicles. 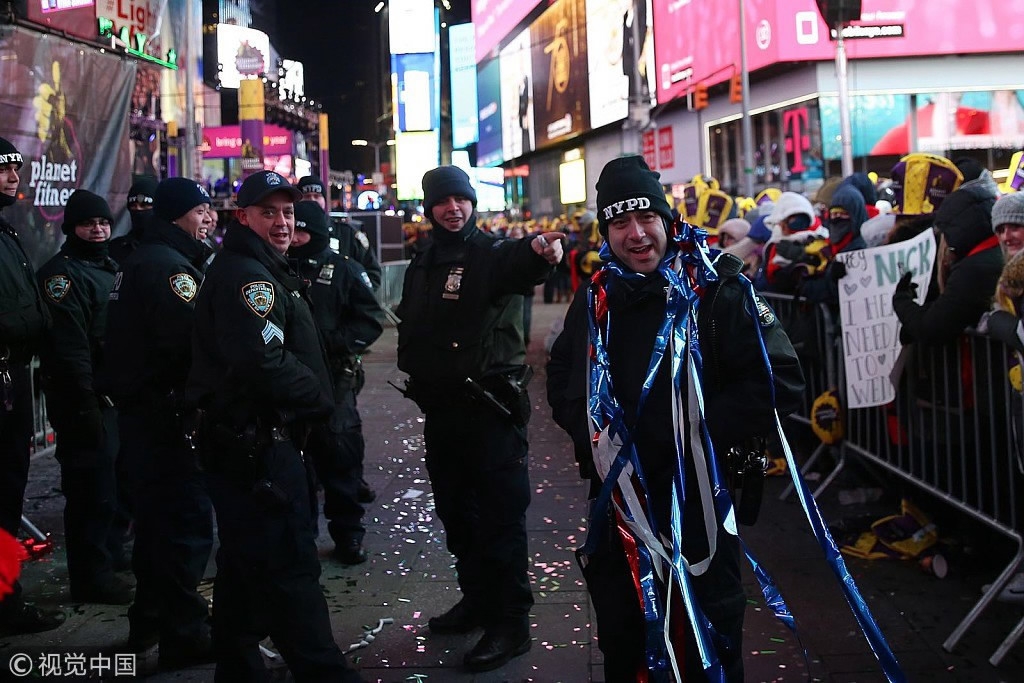 More than 20 roads closed, barricades and sand-filled trucks were in place, along with bomb-sniffing dogs and more officers on the ground. Police also carried out two rounds of security screening on everyone who entered the Times Square security perimeter, the largest in history. On entering the secured area, revelers emptied and discarded their purses and other small bags, which were not allowed.
Additionally, the police department and its law enforcement partners are increasing the number of observation posts throughout Times Square in order to monitor elevated vantage points.
"I feel super safe with the amount of security we have to go through," said Sydni Jussila, who traveled from Cleveland to join the celebration. She added that she felt protected to see a large number of police officers and dogs constantly taking patrols.
11001km
Source(s): AFP ,Xinhua News Agency