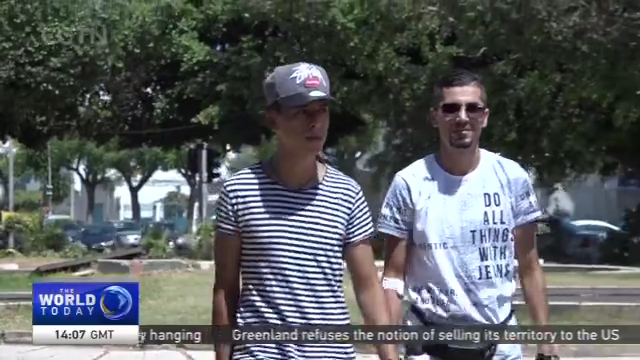 For many years, Libyans have been struggling with a severely under-developed healthcare system and, therefore, seeking medical treatment in other countries, such as Tunisia. The interim government in Libya has been sending those wounded during the country's revolution abroad for treatment, but some Libyans say they have not been able to get the financial assistance they need from their country. CGTN's Adnen Chaouachi reports.
These 2 young men were seeking financial assistance from the Libyan Embassy in Tunis. The Libyan nationals claim they took arms in Tripoli to defend their city against the recent military assault.
HAMZA SABAH LIBYAN NATIONAL "I was wounded in the fighting and almost lost my life. It's shameful that Libyans do not have money to go to clinics in Tunisia. We were welcomed by the Tunisian medical staff but got rejected by our own embassy and Health authorities. We defended our city and honor. We deserve better treatment."
The Libyan men described horrific scenes. They assert that thousands of fighters and civilians were unable to travel to neighboring Tunisia and other countries.
ABDOU RAHMAN BOUJALA LIBYAN NATIONAL "Libya is unsafe and insecure. The number of victims and the wounded is on the rise."
Analysts assert that thousands of Libyans from the internationally-recognized government in Tripoli as well as Khalifa Haftar forces are now treated in the same clinics and sometimes in the same section or room in Tunisia.
KHALIL LAAMERI POLITICAL ANALYST "Tunisia does not intervene in the Libyan conflict. Tunisian doctors provide medical assistance to all Libyans without distinction. Many Libyans use their own savings or rely on their families and tribes to pay for treatment."
Official statistics revealed that over 800,000 Libyan have traveled to Tunisia for medical treatment since the 2011 unrest.
ADNEN CHAOUACHI TUNIS, TUNISIA "According to the Tunisian Ministry of Health, hundreds of Libyans are now looking for medical treatment at public hospitals in the cities of Sfax, Monastir, Sousse, Tunis as well the border region of Medenine. This new phenomenon has increased following the escalation of the armed conflict in Libya. AC. CGTN. T."
SITEMAP
EXPLORE MORE
DOWNLOAD OUR APP